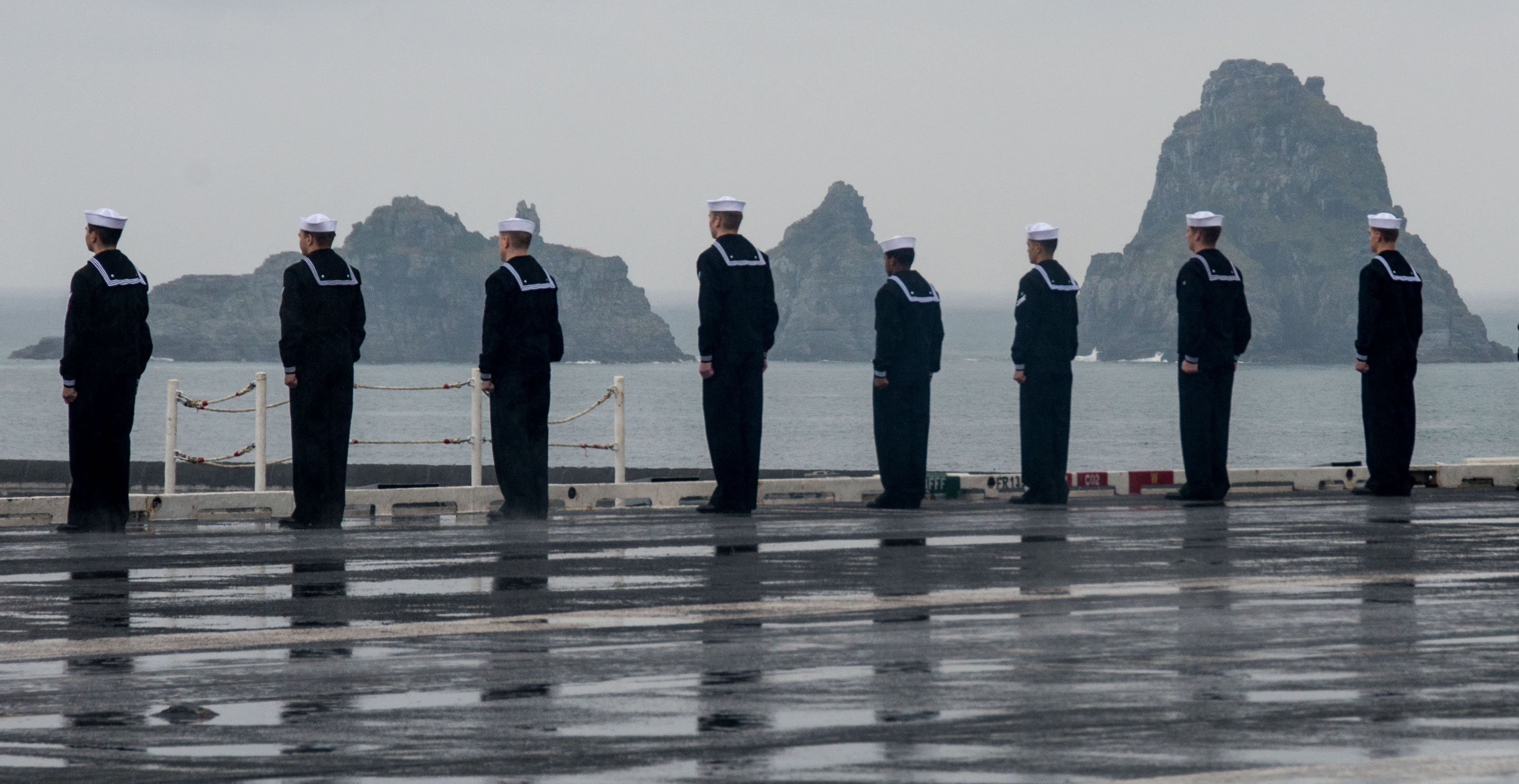 Sailors man the rails on the flight deck of USS Ronald Reagan (CVN-76), as the ship pulls into Busan, Korea on Oct, 16 2016. US Navy Photo

SAN DIEGO, Calif. — Navy forces are preparing for a conflict on the Korean Peninsula – the most likely “fight tonight” scenario they face – by shifting U.S. 3rd Fleet forces as well as the most advanced platforms into the Western Pacific.

Vice Adm. Joseph Aucoin, commander of U.S. 7th Fleet, said North Korea is the only country in his area of operations which is not seeing an improved relationship with the United States, and “if there’s a fight tonight, it’s probably going to happen on the Korean Peninsula.”

Aucoin, speaking at the WEST 2017 conference, said that “we hope that North Korea abides by the United Nations Security Council resolution to stop development of nuclear weapons, but I’m not holding my breath on that regard.” He then described a three-pronged approach for naval forces dealing with that North Korean threat: “technology, our partnerships, and training.”

“Technology, really with the shift to the Pacific we get the best equipment,” he explained.
“We’ve got E-2Ds out there in Iwakuni (Japan) now, we’ve got F-35Bs with III [Marine Expeditionary Force], we’ve got an all-Super Hornet air wing, and in a couple years we’ll have F-35Cs out there. We have Virginia-class submarines making lots of deployments in the Western Pacific, and we also have high-end upgraded [ballistic missile defense] shooters in our DDGs. And so that, combined with the TPY-2s (radars) we have in Japan, the Patriot (missile defense) batteries, provides a pretty good umbrella as far as ballistic missile defense. As far as partnerships, we’re in our 64th year with the South Koreans and the treaty, our alliance that is the foundation for peace and stability in the peninsula and in the region in Northeast Asia. … We do a lot of exercises, we have two major exercises under [U.S. Forces Korea commander Gen. Vincent] Brooks, Key Resolve and Ulchi-Freedom Guardian, that we show the North that we’re ready to deter any aggression. With those exercises and those partnerships, I think on a daily basis we show the North that we’re ready to effectively stop them if the need arises.”

Of course, North Korea isn’t the only threat the Pacific faces. To allow 7th Fleet to focus more resources on a potential North Korean contingency, U.S. 3rd Fleet is building up its ability to operate forces beyond the International Date Line, in areas of the Western Pacific traditionally commanded by 7th Fleet.

This “3rd Fleet Forward” concept was announced by U.S. Pacific Fleet commander Adm. Scott Swift in 2015, but 3rd Fleet commander Vice Adm. Nora Tyson said at the conference that the North Korean threat was a main driver behind this effort.

“What we have done in the past really 18 months is we, 3rd Fleet, have worked very closely with 7th Fleet and PACFLT in developing our, 3rd fleet’s, capability to command and control forces forward in the Western Pacific, with the assumption that if something were to happen – and as [Aucoin] said, the number-one probability fight-tonight scenario would be on the Korean Peninsula, would be in the KTO, Korean Theater of Operations,” she said during the same panel discussion.
“If that were the case, the assumption is that [Aucoin] and his team would be pretty busy up there working for Gen. Brooks and managing that problem, and 3rd Fleet would be available to provide that command element to handle whatever else may happen in the Pacific Fleet AOR … be it a major humanitarian disaster requiring that level of [joint task force] three-star commander, be it some scenario, maritime security issue in the South China Sea. So we have been working very closely with 7th Fleet, [Aucoin] and his team, and PACFLT to ensure that we have the connective tissue where if something were to happen that 3rd Fleet could very quickly respond, complement [Aucoin] and his team and handle whatever scenario may come to pass in the Pacific theater.” 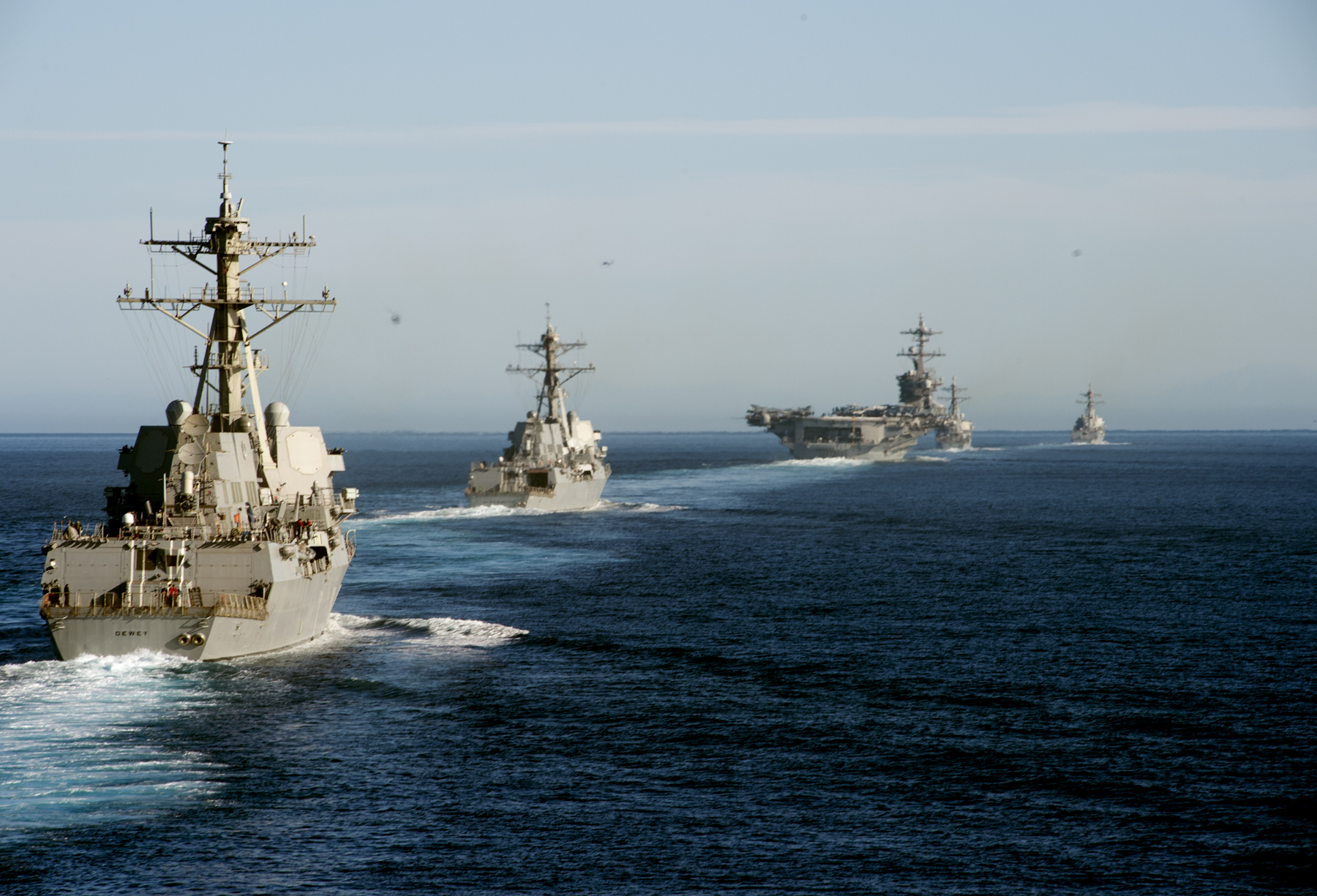 As part of 3rd Fleet Forward, Tyson deployed a three-destroyer surface action group last year and maintained operational control of the ships throughout the deployment. The Carl Vinson Carrier Strike Group that left San Diego on Jan. 5 and arrived in the South China Sea last week will remain under 3rd Fleet control as well, and Tyson said that CSG had an added training event during its transit from San Diego to Hawaii so the sailors would arrive in theater as well-trained for high-end warfighting as possible.

“We recently deployed the Carl Vinson strike group and we did something new with the Carl Vinson strike group: after she was trained and certified … we did something … called the Fight to Hawaii,” Tyson explained.
“And what we did was, post-certification of that strike group, we gave them some extra instruction, if you will, some extra training as they transited to Hawaii. And the air wing did more flying, they operated [emissions control], we then put them through the undersea warfare exercise once they got out (to Hawaii). So once they got in theater, and they entered the South China Sea on Friday, they were as prepared as they possibly could be.”