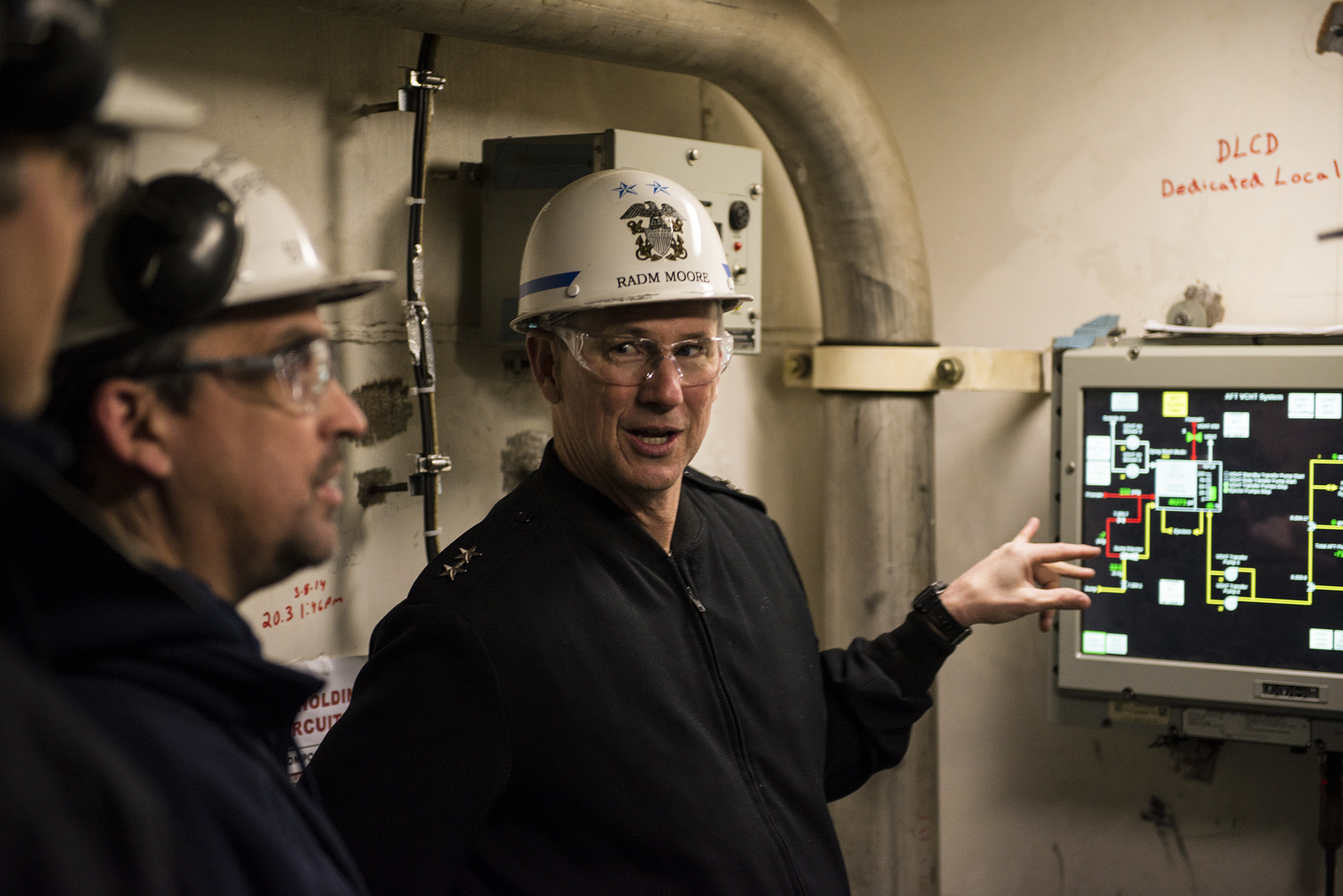 President-elect Donald Trump supports increasing the size of the Navy fleet but has also made clear that the Navy and industry will have to lower the cost per hull for new construction, the head of Naval Sea Systems Command told USNI News.

Vice Adm. Tom Moore has met with Trump and had ongoing conversations with his transition team, and he said the next commander-in-chief is approaching his new job from the perspective of a businessman.

“He was very interested in specific defense programs, but it was obvious that his overall thought process was, we want a bigger fleet – his administration is pretty clear on 350 ships, and that aligns nicely with where we are for the force structure assessment, so I think we’re aligned on what that goal is,” Moore told USNI News after moderating a panel at the Surface Navy Association’s 2017 conference.

However, he said, “industry and we on the Navy side have an obligation to also drive cost down, so I think that’s the message that [Trump] delivered pretty loud and clear, not only to industry but to us. We’re excited about the opportunity to grow the force, but we’ve got a lot of work to do going forward.”

During the conference panel, Moore described the cost savings Trump was looking for as “dramatic.” Moore’s panelists – including several program executive officers who oversee ship and shipboard weapon acquisition programs – discussed ways to take some cost out of programs, though many of their programs are in serial production and have already seen prices drop as procurement and construction has become more efficient.

“I think he’s set some pretty clear expectations of what’s possible,” Moore said, without quantifying those goals.
“I think he’s shown through his business over the years that he has pretty high expectations, and I’m actually encouraged that he’s setting those expectations because I think it sends the message that industry and we on the acquisition side need to hear loud and clear, that if we want to grow … we’ve got a lot of work to do. I don’t think he’s telling us anything that’s out of the question, and I think he’s absolutely sending us the right message going forward.”

Rear Adm. Bill Galinis, the program executive officer for ships, said his programs are already driving out cost by leveraging mature designs as the starting point for new ship classes, such as using the proven San Antonio-class amphibious transport dock (LPD-17) as the basis for the LX(R) dock landing ship replacement design. Galinis added that commonality across ship classes in components and weapon systems can also help keep costs low during acquisition and sustainment.

Rear Adm. Michael Jabaley, the program executive officer for submarines who is in serial production of the Virginia-class attack submarine and at the beginning of detail design for the Columbia-class ballistic-missile submarine, said the Navy and industry would have to look at personnel and facility capacity carefully to increase the size of the fleet in a timely manner and for an affordable price.

Noting that there was already going to be a shortage of submarines in the 2020s when the requirement was 48 SSNs, and now that a new Force Structure Assessment calls for 66 the service is already in a hole, he said “we have the capacity to increase (the fleet), but in order to do the type of shipbuilding that would be necessary to get to 66 attack submarines, I would say we have the potential. We’ve obviously done it before – we delivered as many as six Los Angeles-class submarines in one year in the 1980s at the same time we were building the Ohio class SSBN. So the potential is there, the question is at what point do you need to start building more facilities, hiring more people. We’re already in the middle of a facilities expansion and a significant employee ramp-up at our shipbuilders, just to handle the increased demand signal brought on by the Columbia SSBN. So now to figure out how to get the Navy to 66 attack submarines in the right amount of time without breaking the submarine construction enterprise, obviously additional employee ramp-up, additional facilities will be required, so we’re doing that hard work right now to figure out what the recommended posture is to get us to 66. It’s all very early, and yes the potential is there, but the capacity needs additional facilities and employees to do a shipbuilding program of that size and pace.”

Rear Adm. John Neagley also discussed the role industry capacity plays in keeping costs down. As the program executive officer for Littoral Combat Ships, Neagley currently works with two shipyards but under the direction of Defense Secretary Ash Carter is planning for a downselect to a single builder no later than Fiscal Year 2019. It remains to be seen what the incoming administration will direct PEO LCS to do, but Neagley commented that having two yards competing for multi-ship buys has been a cost-saver for that program.

“Leveraging a hot production line is kind of a key strategy for us. In terms of LCS, we have two production lines at two shipyards; taking advantage of that investment that already has occurred in the shipyards both from a people standpoint and infrastructure standpoint is important,” he said.
“As I talked about before, having these multi-ship strategies, a block buy … provides a lot of advantages, provides you a lot of stability, predictability.”

In addition to discussing shipbuilding with Trump and his transition team, Moore told USNI News he has also talked to the president-elect about ongoing operations and maintenance funding shortfalls.

“We’ve had many discussions with the transition team coming in about what we would do with FY ’17 supplemental money and the ’18 budget,” he said, in reference to additional funding Republicans in Congress have pushed for to support military operations around the globe.
“I don’t want to presuppose what the administration’s going to do, but clearly they’re going to focus on both the current readiness piece … and growing the size of the force. So discussions are happening right along those lines.”