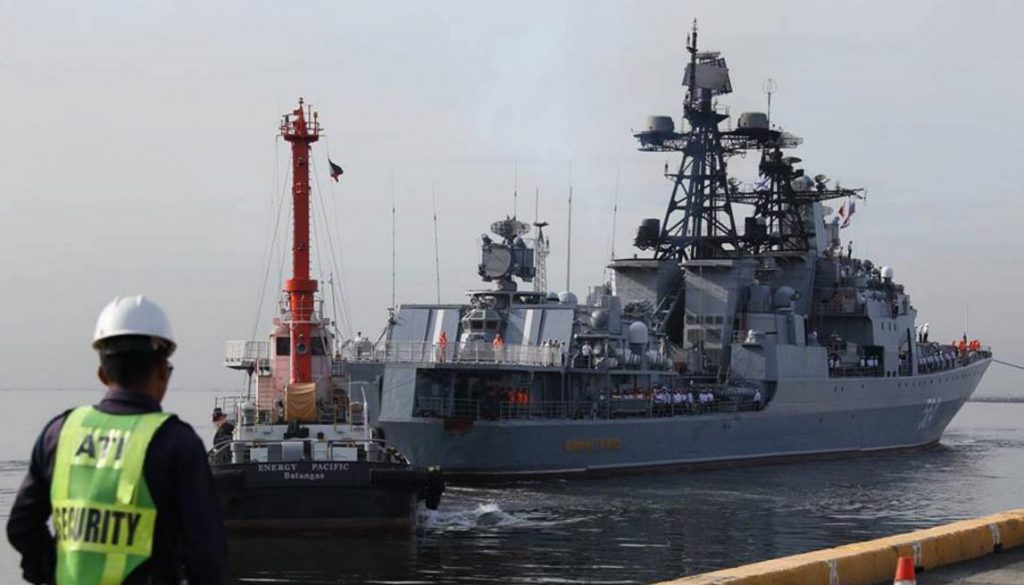 As the U.S. relationship with the Philippines has come under rhetorical assault from President Rodrigo Duterte, Moscow has moved closer to Manila offering to sell arms and to start a bilateral military exercise program.

During a news conference, the head of Russian naval forces in the Pacific indicated the Russians could return to conduct naval drills.

“Our governments will maybe discuss in some period of time the possibilities of our maritime exercises,” Rear Admiral Eduard Mikhailov, head of the Flotilla of the Russian Navy Pacific Fleet said in a news conference, according to newswire Reuters.
“The biggest problem now in the world is terrorism and piracy, and all our exercises we have, for example, with you, we will have to fight these problems and we will show you what we can do and we will see what you can do and show us.”

“We are ready to supply small arms and light weapons, some airplanes, helicopters, submarines and many, many other weapons. Sophisticated weapons. Not the second-hand ones,” he said on Wednesday, reported Reuters.

Khovaev indicated the relationship with Moscow wouldn’t preclude any other agreements with the Philippines.

“The United States and the Philippines have been allies for many decades, and our defense cooperation has always been provided at the request of various Philippine administrations,” read a Wednesday Pentagon statement provided to USNI News.
“Our overall mil-mil relation with the Philippines remains robust and multifaceted.”

A closer relationship with Manila and Moscow will not change the importance of the military to military relationship the U.S. has with the Philippines, a U.S. State Department spokesman said on Tuesday.

Exercises with Russia, “won’t affect how we view the importance of our bilateral relationship with the Philippines,” spokesman John Kirby said on Wednesday.
“These choices that countries have to make are not binary choices, and every nation-state has the right to pursue bilateral relations of its own choosing,”

As to specifics of what the Russians intend to take the relationship further are unclear.

The overtures from Moscow come as Duterte has spent months lambasting the U.S. over its relationship to the Philippines. Following public comments that he intended to “cancel” planned exercises with the U.S., Marine Corps Forces Pacific said the decades old PHIBLEX amphibious exercise would be shelved in favor of smaller scale drills focused on humanitarian aid and disaster relief.