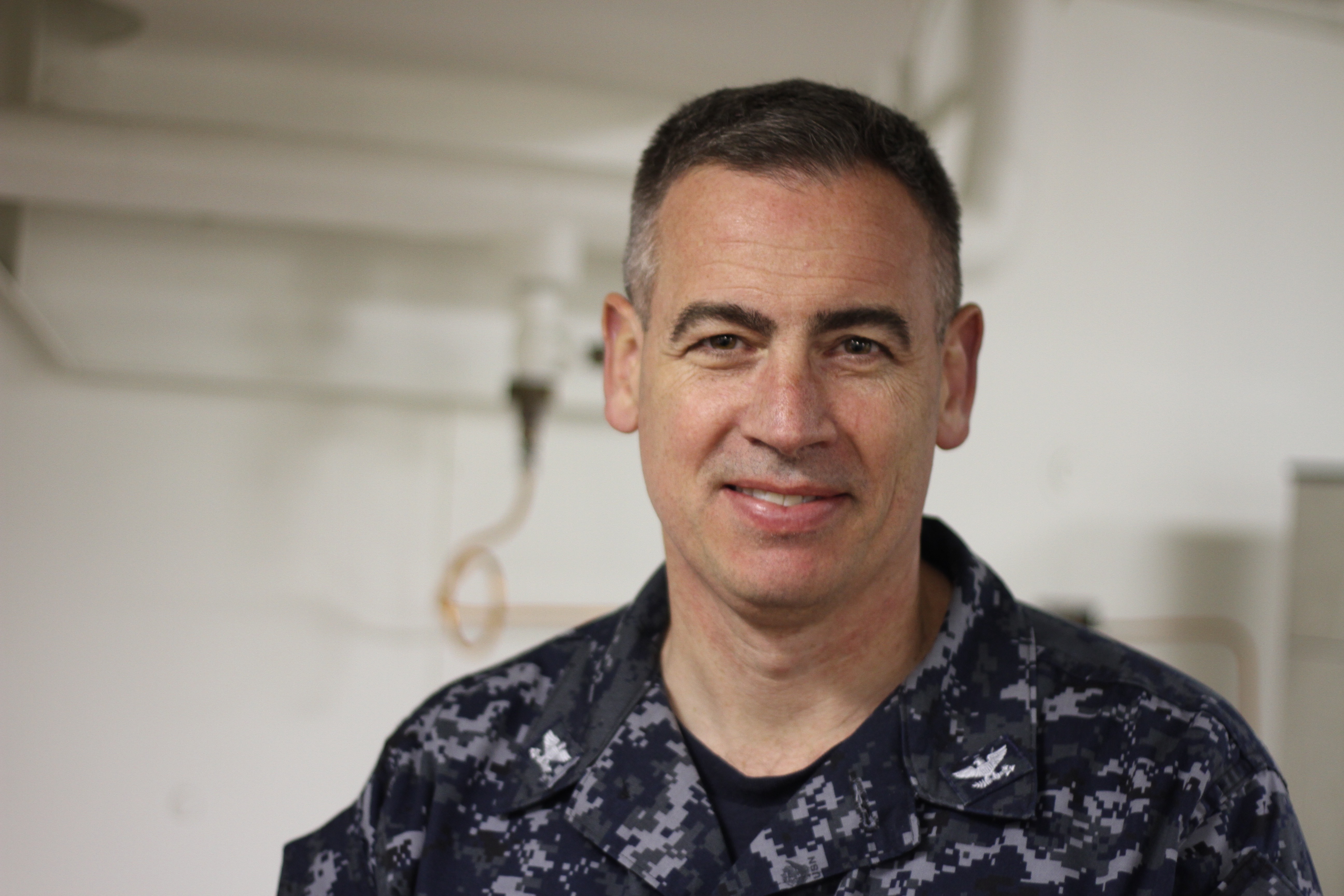 On Tuesday Capt. James Kirk turned over command of the guided-missile destroyer USS Zumwalt (DDG-1000) to his executive officer and ended his tenure leading the crew of the Navy’s newest and most unique warship.

Last week Kirk spoke with USNI News on what life’s like for the crew of Zumwalt and the transit from Maine to the ship’s new San Diego homeport.

Following a May delivery to the service from General Dynamics Bath Iron Works, the ship had a brisk schedule before departing the Maine shipyard.

“We left Bath in a very short period of time in comparison to any ship and particularly first-in-class with this many new technologies,” Kirk said.
“We were there for 105 days from delivery to sail-away, and they went through every one of the certifications and training events that were required and did every one of those exceptionally well under challenging circumstances and proudly sailed the ship down the Kennebec on [Sept. 7].”

Before Zumwalt left for three-month transit, the ship had only been at sea for about 18 days. That time at sea gave the 147-member crew, along with about 30 contractors and sailors from the next ship in the class, Michael Monsoor (DDG-1001), a chance to test some of the systems – like the SPY-3 radar system aboard as well as the SQQ-90 dual-band sonar suite – while underway.

Between when Zumwalt slid down the Kennebec and its early December arrival in San Diego, Kirk and his crew of 147 sailors showed off the ship to thousands from Baltimore to Cartagena, Colombia.

But at 16,000 tons and almost 100 feet longer than an Arleigh Burke guided-missile destroyer, one thing stands out in visitors’ minds when they see Zumwalt for the first time.

“People are surprised by the size of the ship. The size takes them a back a bit,” Kirk said.
“They were not clear in their mind on how big this ship actually is.”

Despite its size, the crew is much smaller than an Arleigh Burke destroyer’s complement of about 320 sailors and officers, and crew members are required to have a higher degree of technical expertise to run the ship. In particular, those dealing with the complex power system need a strong technical background. Zumwalt’s integrated power system directs the output from its gas turbine engines to drive two large Advanced Induction Motors (AIMs) that route power to the rest of the ship. While underway, the ship’s crew had to live the technical challenge of maintaining that system that is so different from anything else in the fleet.

“We have a different type of power system – very different. There is no analogy in the U.S. Navy,” Kirk said.
“It’s very complex and so it puts a high demand on technical expertise and the toughness of the individual sailor on running that engineering plant.”

In order to keep the crew size down, many of the systems are automated and need to be monitored by the watch standers aboard.

“We have over 35,000 signals running around the ship from everything from fire and smoke to valve position, doors being open and closed, so that interface, that computing interface, the human-machine interface is dramatically different,“ Kirk said.
“That network has to be monitored and managed.”

Sailors also had to get used to running the ship with a smaller crew and needed to take on more responsibilities than on a typical ship.

“I talk about happily sharing the burdens with one another, every sailor from the captain on down, on little things and small things, we need to be willingly able to happily share the burdens with one another,” Kirks said.
“It’s a more spartan environment. The captain cleans his own head. … We don’t have food service attendants, so sailors in a duty-section basis or a watch-rotation basis help out in the scullery, make sure our messing and berthing areas are cleaned up, our common areas are cleaned up on the ship.”

While the crew was learning the ins and outs of the new ship, Zumwalt suffered several high-profile engineering failures that caused the ship to be sidelined at Naval Station Norfolk, Va. and in Panama. The Navy is still investigating the cause of the failures, which centered on the lube oil system that leaked seawater onto bearings connecting the AIMs to the ship’s shafts.

While Kirk didn’t address the engineering challenges directly, he praised the resilience of the crew for how well they dealt with problems with the first-in-class ship.

“This is not easy,” Kirk said.
“Shipbuilding is tough, it’s hard. With a new class of ship, when you put this many new things on one ship it requires great resilience and toughness to get through the challenges, come out the other end and have succeeded.” 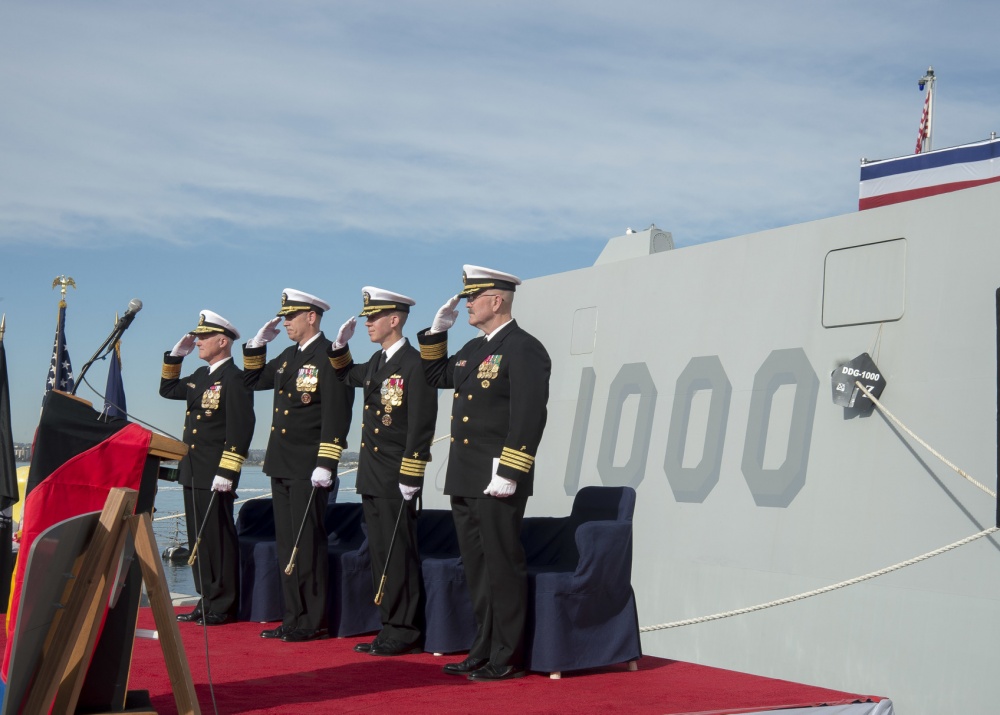 Now in San Diego, the ship is set to conduct a post-commissioning maintenance availability and then move into a combat activation period starting in 2018. As the availabilities continue, the Navy will determine how the ship will serve when it enters the fleet in earnest in late 2018.

“The baseline is that it’s a multi-mission warship, and as a multi-mission warship it can be employed in a fashion that’s customary to multi-mission warships – meaning it can operate with a carrier strike group, operate with an amphibious ready group or independent missions. There’s a unique aspect to the ship: its stealth, the combination of its offensive and defensive abilities that it has programmed today, and the opportunity (to grow) in the same places the surface force is leaning – distributed lethality, having an increased amount of investment in sea control and those capabilities,” Kirk said.
“If you ask where the ship is today? It’s a toddler, it’s a young ship that has to come through and grow up and go through its adolescences. Ten years from now we could have a great conversation, just like we’ve had for other classes of ship, the Spruance-class destroyers, the Oliver Hazard Perry-class frigates… But the first thing we have to do is get through the test program and integrate it with the fleet.”