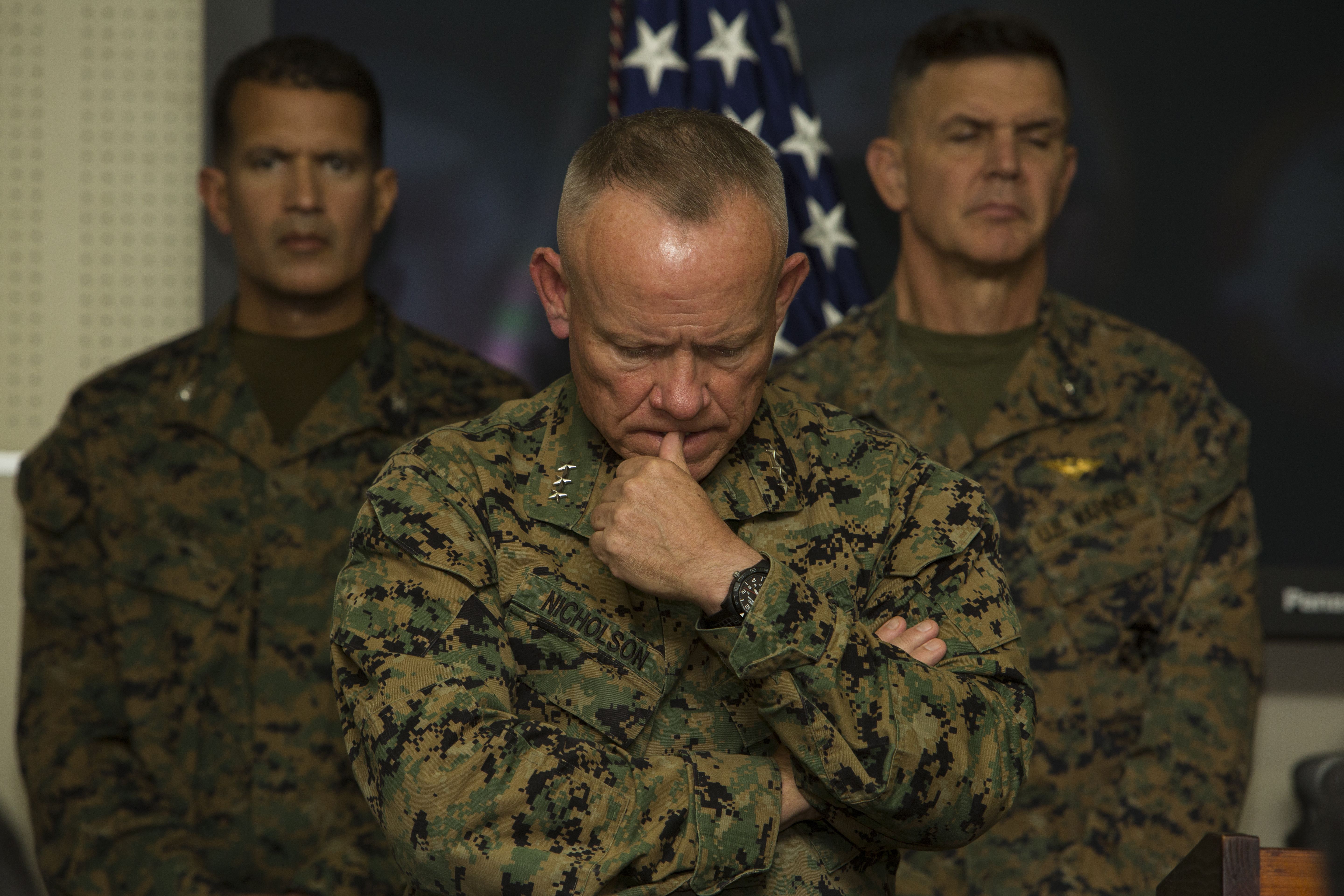 Tuesday’s MV-22 Osprey crash off the coast of Okinawa occurred while the crew was conducting an aerial refueling operation at night and damaged the aircraft, with the crew choosing to land the aircraft in the water instead of risking flying over civilian homes on the Japanese island, the commanding general of III Marine Expeditionary Force said in a press conference.

Lt. Gen. Lawrence Nicholson said in a press conference today that the rotorcraft was conducting aerial refueling operations over the sea when the rotor blades struck the refueling line, damaging the aircraft.

“After the aircraft was unhooking, it was shaking violently,” Nicholson said of the Osprey from Marine Aircraft Group 36, 1st Marine Aircraft Wing.
“The pilot made a decision to not fly over Okinawan homes and families. He made a conscious decision to try to reach Camp Schwab and land in the shallow water to protect his crew and the people of Okinawa.”

A defense official told USNI News Tuesday that the landing in shallow water, described as more than five miles off the east coast of the island, was a “preventative” measure.

During the landing in rocky shallow waters, the aircraft broke apart, with Associated Press photos showing the aircraft sitting in the water with the wings broken apart from the body of the plane.

As a precaution, Nicholson temporarily halted all MV-22 flight operations under Marine Forces Japan until he is “satisfied that we have reviewed our checklists and safety of flight procedures.”

Still, during the press conference he praised the crew’s decision to put the aircraft in the water instead of risk lives onshore.

Tensions are still high on Okinawa about Marine Corps aircraft flying in and around the island – particularly newer, bigger and louder platforms such as the V-22 and the F-35B that will arrive in Japan next year. Nicholson made clear during his press conference that the training for Marines and with their Japanese partners is important and will continue in a safe manner.

“We do everything we can to ensure safety of flight, well trained crews and solid performance by our Ospreys – never never endanger the citizens and people of Okinawa,” he said.
“I hope you will understand and agree that there is risk and danger in training at night in good weather and bad weather, but that that training is necessary and that that training is important for our two countries.”

The Osprey’s five crew members were rescued by the U.S. Air Force’s 33rd and 31st Rescue Squadrons and transported to the Camp Foster Naval Hospital in the southwestern part of the island. Three have been released and the other two remain in the hospital for observation.

“I want to thank the Japan Coast Guard for their quick response as well as the Okinawan Police for their support in securing the site,” Nicholson said at the press conference.

An initial salvage survey at the location is underway to determine the most viable platform and method of recovery for the aircraft while also protecting the local environment, Nicholson said.

The Marine Corps is investigating the mishap and stated it would not release additional details about the cause until the investigation is complete.