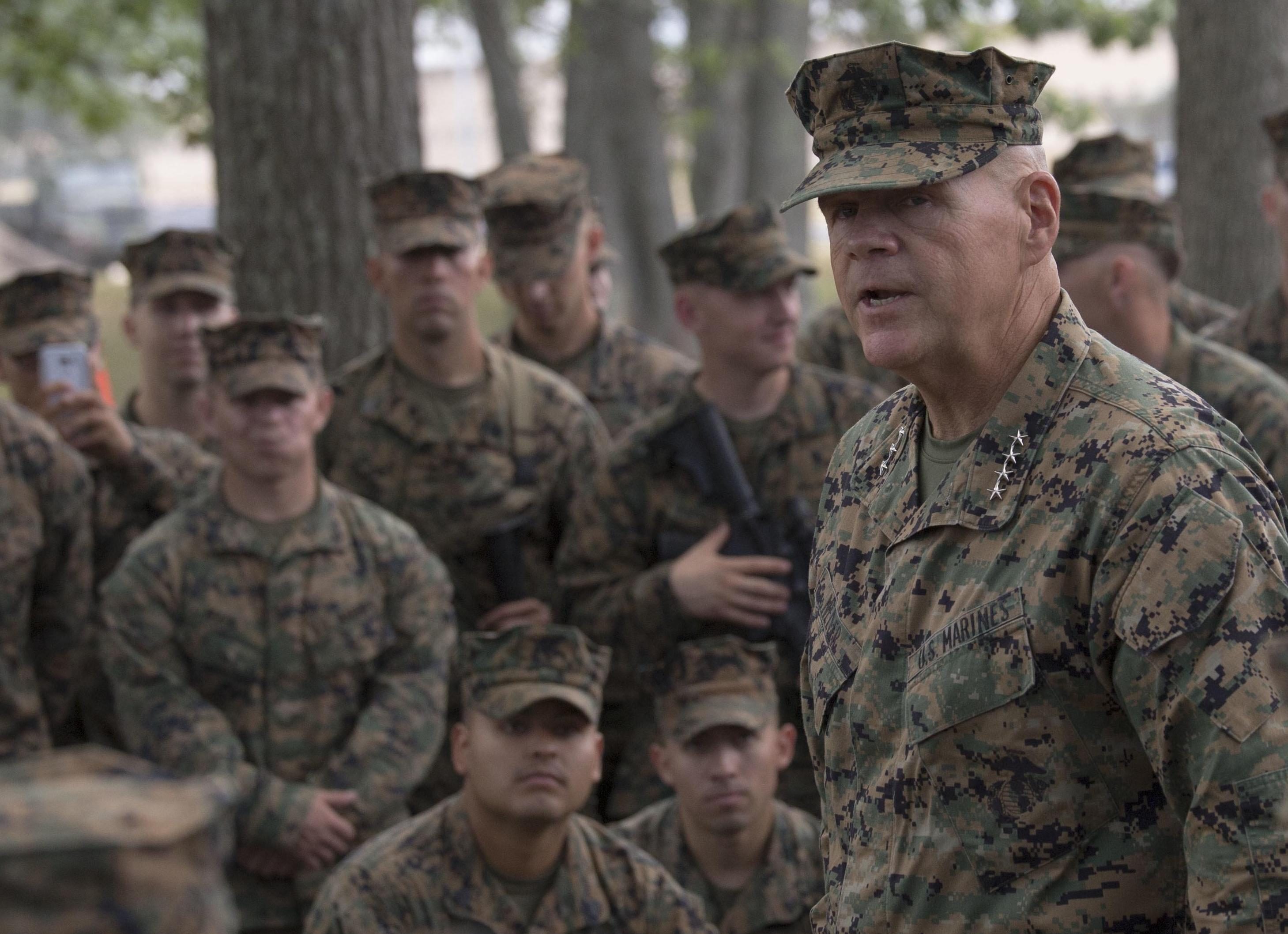 Gen. Robert B. Neller, Commandant of the Marine Corps, speaks with a group of Marines from Marine Forces Reserve on Aug. 24, 2016. US Marine Corps Photo

Washington, D.C. – If an additional 3,000 Marines Congress has authorized for the U.S. Marine Corps gets approved, that end-strength will be routed to emerging cyber, intelligence and electronic warfare missions, the service’s top officer said on Wednesday.

“They’ll be performing tasks and providing capabilities that we don’t think are existing in the current force in sufficient quantity, or they don’t exist at all,” Marine commandant Gen. Robert Neller said during the Defense Forum Washington conference hosted by the U.S. Naval Institute.
“What capabilities? Information operations, intelligence analysis, targeting, electronic warfare [and] cyber.”

Even if the Marine Corps doesn’t grow from 182,000 to 185,000 – as proposed in the Fiscal Year 2017 National Defense Authorization Act – Neller said the requirements of the modern battlefield are pushing the Marines to a higher-end fight than the Corps conducted in Afghanistan and Iraq.

“When we grew the force to 202,000, what we did was make more of the same capability that we had, more infantry battalions, more tank companies, because that was what we needed for that fight,” Neller said.
“We don’t want to fall into the trap of preparing to fight the last war.”

In September the Marine Corps released its new operating concept that places a heavy emphasis on urban and littoral fights with a high-tech adversary armed with aircraft, unmanned aerial vehicles and an electronic warfare capability.

“The one thing we’re not going to do is keep the Marine Corps the same,” he told reporters after his presentation.
“We believe – not just me – that all the leadership believes that the capabilities we’re trying to build into the force are the things that we’re really going to need for the future. If you don’t have those things, whatever formation you put on the battlefield isn’t going to be as survivable or combat-effective without.”

For example, Marines have been training to fight with the loss of communication, GPS and data networks for the last two years against opposition forces that have unmanned aerial vehicles and aircraft. 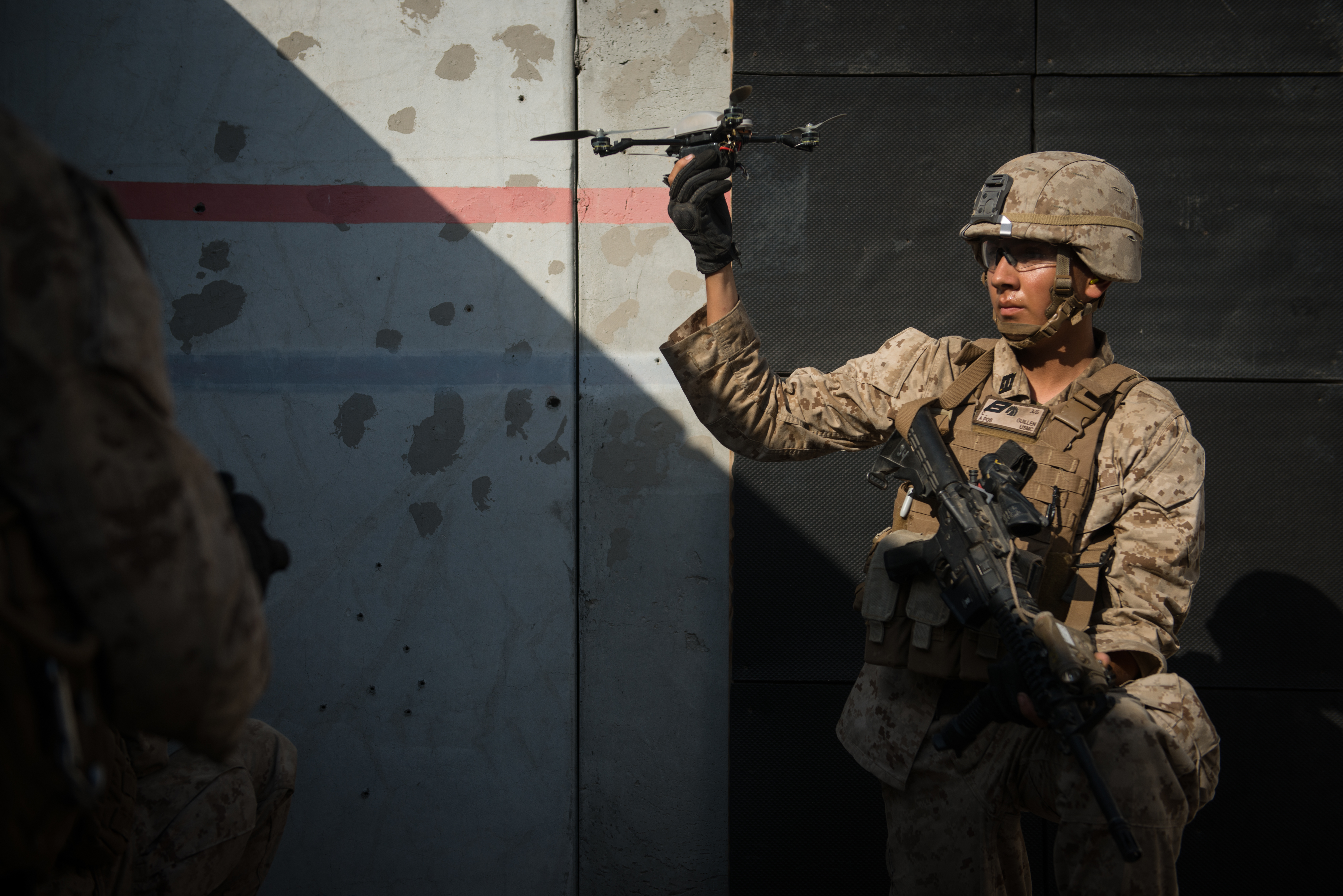 “We have to change our training and our mindset to almost what it was like back in the ‘80s when we were going to fight a war of maneuver – the maneuver warfare mindset that there was going to be friction, and you’re not going to see what the enemy is going to do, that you have to mask your signature, that you have to be able to move, expect that you’re going to receive indirect fire with accuracy, that the adversary has aviation, that they have ISR, that they have [unmanned aerial vehicles], that they have electronic warfare, that they’re going to jam your nets, that they’re going to fly their planes over you. And we have to create that training environment so that when a solider, sailor, airman or Marine sees that [situation], they know what it is,” Neller said.
“Even if we didn’t get the end-strength increase, we’re going to create those capabilities. If we have to take Marines from doing ‘Job A’ right now into these other capability sets.”

Neller also addressed President-elect Donald Trump’s endorsement of a Heritage Foundation plan to increase the size of the Marine Corps by about 12,000 – 12 infantry battalions and one tank battalion.

“If that’s what the president directs us to do, that’s what we’ll do, so long as we get the funding and support to do it. But it will take some time. But as I said to the earlier question, those capabilities are important, but the capabilities on the modern battlefield are as important,” Neller said.
“My only caution would be is that we have a very high-quality force and whenever you try to grow too fast, it’s very difficult to maintain that level of quality and experience.”