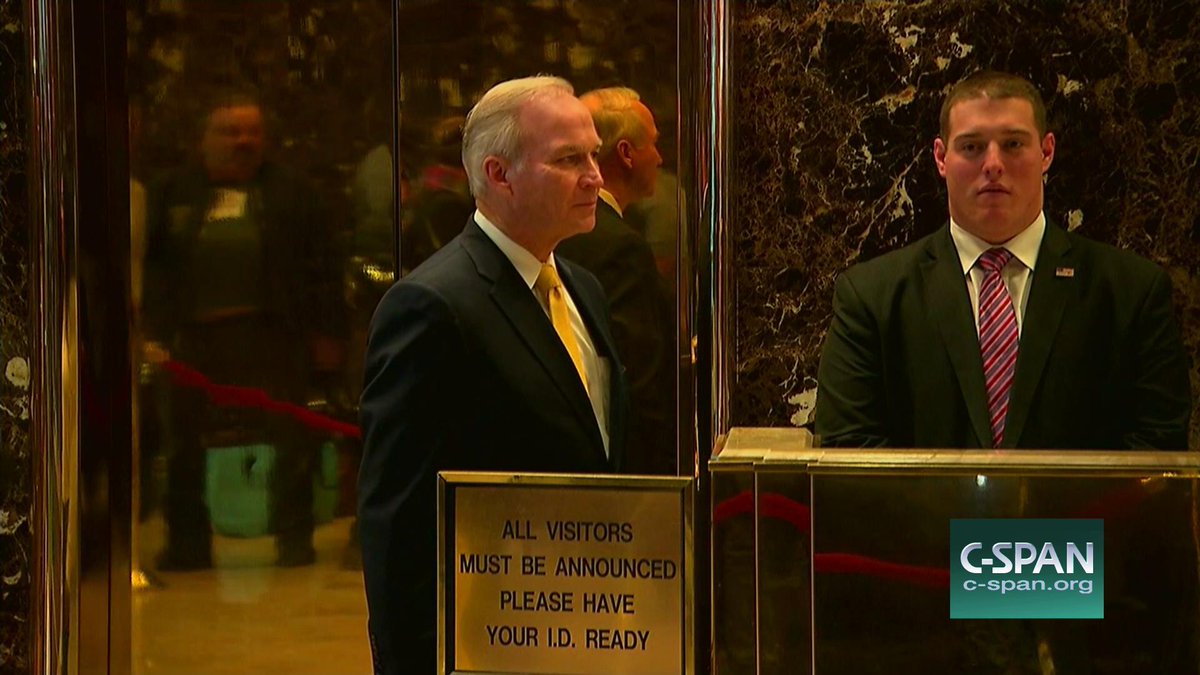 Rep. Randy Forbes (R-Va.), the frontrunner to serve as the next Navy secretary, was seen at Trump Tower in New York on Monday, just days after the ranking Democrat on the House Armed Services seapower and projection forces subcommittee sent a letter to the Trump administration endorsing Forbes for SECNAV.

Seapower subcommittee ranking member Rep. Joe Courtney (D-Conn.), who has led the committee alongside subcommittee chairman Forbes for the past two years and served with him in Congress for several years more, wrote in a letter addressed to Vice President-elect and transition team lead Mike Pence that “working together, Randy and I have worked to find innovative new ways to build ships and aircraft, invest in new technologies and capabilities, and ensure that our Navy has the support it needs to meet the challenges of today and the future. … President-elect Trump has made increasing the size of the Navy a top priority. While he and I disagree on a great many issues, this is not one of them – our Navy must grow and adapt in order to meet the varied threats and challenges confronting our nation in the twenty-first century. However, achieving this end will require the contribution of those with a detailed understanding of the challenges and opportunities ahead. Given the complexity of our industrial base and competing priorities (in) the Navy and the larger Defense Department, it will be critical that the Navy be led by someone with knows how the Navy, Congress and industry works. I can think of no better individual to be tasked with this responsibility than Randy.”

Forbes’ name emerged as a frontrunner for Navy secretary the week of the general election, even as dozens of names swirled for other top defense and national security positions. Forbes was spotted at Trump Tower in New York as seen on a live pool video feed of the building’s lobby maintained by C-SPAN. Forbes lost his primary election this spring after his congressional district’s boundaries were redrawn and had not yet announced any plans for after he left Congress.

Courtney told USNI News today that he has never signed a letter like this, endorsing a Republican to serve in a new administration, but “in this case it was a pretty easy call because I think any member who served on seapower over the last four years knows that Randy really bent over backwards to try to be supportive of the issues people brought forward regardless of party.”

“Even more than that, there’s no question in my mind there’s going to be a push to increase the size of the fleet based on certainly the president-elect’s comments but also the force structure assessment that should be made public very soon – and it sounds pretty simple when you just say you’re going from 308 to 320 or 350, it’s just numbers on a piece of paper, but there’s a lot of moving parts to it,” he continued.
“Randy has total command of the process that happens at the shipyards – he’s been a frequent visitor to all the shipyards, he’s familiar with the supply chain, and at the end of the day it requires Congress to authorize and appropriate and so he’s just very well suited to do that kind of a mission.”

Courtney said that even keeping the fleet size on its current trajectory, from today’s 272 battle force ships to the stated requirement of 308, would be a challenge due to the upcoming Ohio Replacement Program, which will cost nearly $100 billion. Growing the fleet is an even more complex challenge, but if Forbes were named Navy secretary, Courtney said “there’s no learning curve for him.”

“I think he would be a great partner for Congress, who has to find the ability to put a thinking cap on, find the resources in the right mix to get to an appropriate sized fleet,” Courtney said.

As for other top spots in the Department of the Navy, Courtney said fellow HASC member Rep. Duncan Hunter’s name continues to come up in conversations.

“I really am fond of Duncan, his name has been thrown around out there,” Courtney said.
“I respect him, he’s a totally different kind of guy than Randy but he’s serious about his commitment to the Marines and maritime forces. If he’s one of the names that are going to emerge, I’m certainly fine with that.”