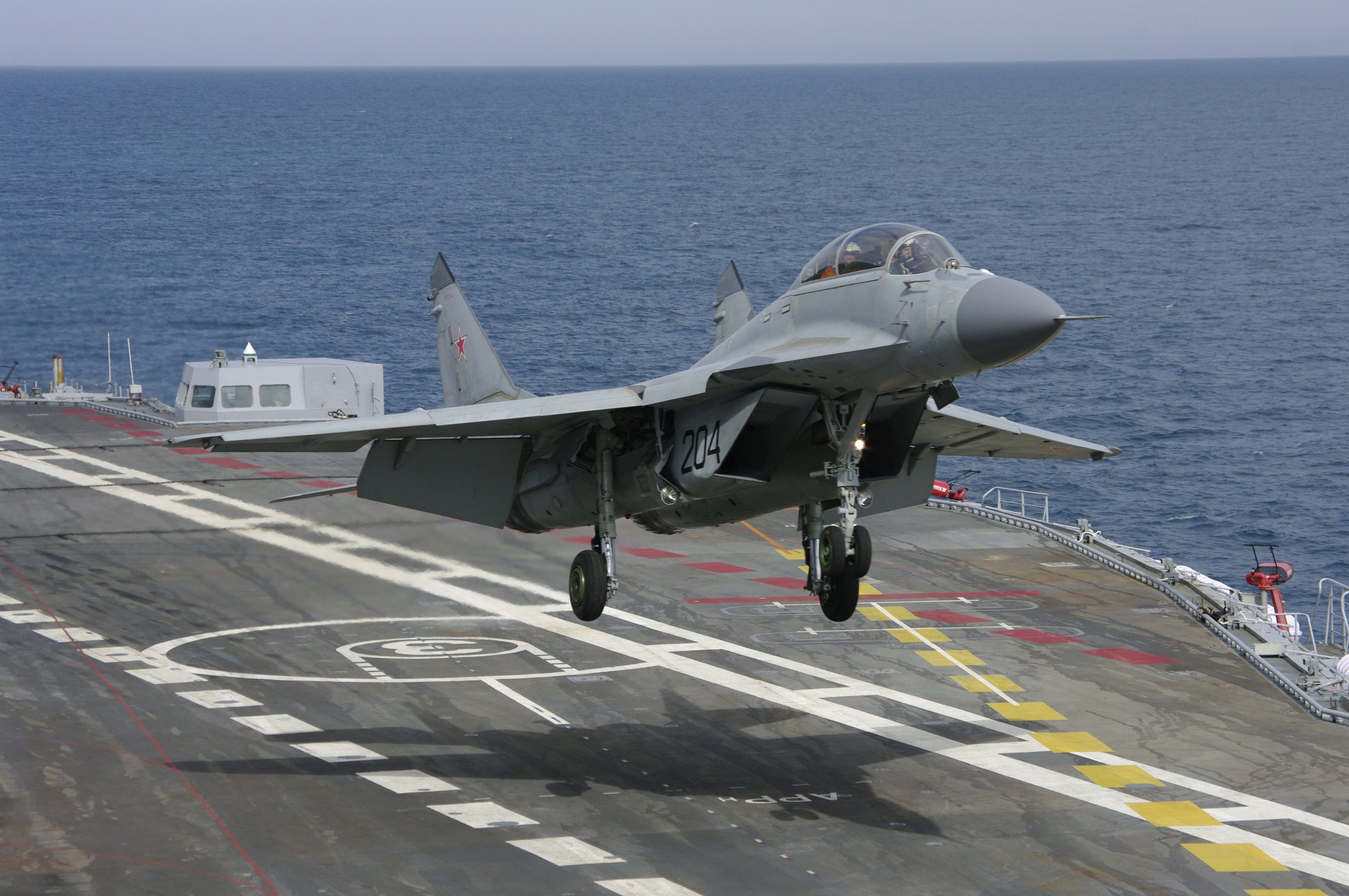 A fighter assigned to the Russian carrier operating in the Eastern Mediterranean crashed during a landing approach on Sunday, a U.S. defense official confirmed to USNI News on Monday.

The Mikoyan MiG-29K was part of a trio of MiGs that had sortied from Russian carrier Admiral Kuznetsov headed over Syria. At one point, for unknown reasons, one of the fighters turned back to the carrier and crashed while on approach to the carrier, the official said.

“An aviation accident with carrier-based fighter MIG-29K occurred during exercise flights as a result of a technical fault during the approach landing a few kilometers from the Admiral Kuznetsov aircraft-carrying cruiser,” the Russian Ministry of Defense said in a statement published by state-controlled media.
“The Russian aircraft carrier group continues its activity in the Mediterranean Sea as planned. The flights of sea-based aviation continue.”

According to Combat Aircraft magazine, a search and rescue helicopter from the carrier recovered the pilot who ejected from the aircraft.

“Initial indications are that the aircraft was a two-seat MiG-29KUBR version,” reported the magazine.
“Operated by the 100th Independent Shipborne Fighter Aviation Regiment, a total of four MiG-29KR/KUBRs were understood to be on board the carrier.”

While details of the crash are few, the loss of the MiG-29 highlights weaknesses in Russia’s carrier aviation capability, Eric Wertheim — naval analyst and author of U.S. Naval Institute’s Combat Fleets of the World — told USNI News on Monday.

While the MiG-29s are considered to be technically capable aircraft, Russian naval aviation has suffered in the realms of personnel, he said.

“Carrier aviation is a dangerous business but one of the big challenges the Russians have is they don’t have a wide pool of people with these skills,” Wertheim said.
“A few years ago there were stories they were largely contractors as pilots. They’ve been trying to pass that skill on but there’s not the ability to do that because the pool is small and they’re not a lot of facilities available.”

A Russian carrier aviation training center near Ukraine was supposed to go online in 2015 but there are indications that the installation is still being constructed.

While few details of the MiG’s mission are available, fighters launching from the carrier have been flying armed missions from Admiral Kuznetsov over the Aleppo region since last week. While no fighters launching from the carrier have dropped ordnance on targets, an official told USNI News that six Sukhoi Su-33s that entered the region on the carrier, have left the ship and are operating from land striking targets near Aleppo.

The surface action group made up of Admiral Kuznetsov cruiser Peter the Great and two Udaloy-class guided missile destroyers plus auxiliaries — is operating south of Cyprus as of last week. Russian officials have said for the last two weeks forces were set to strike rebels near Aleppo.