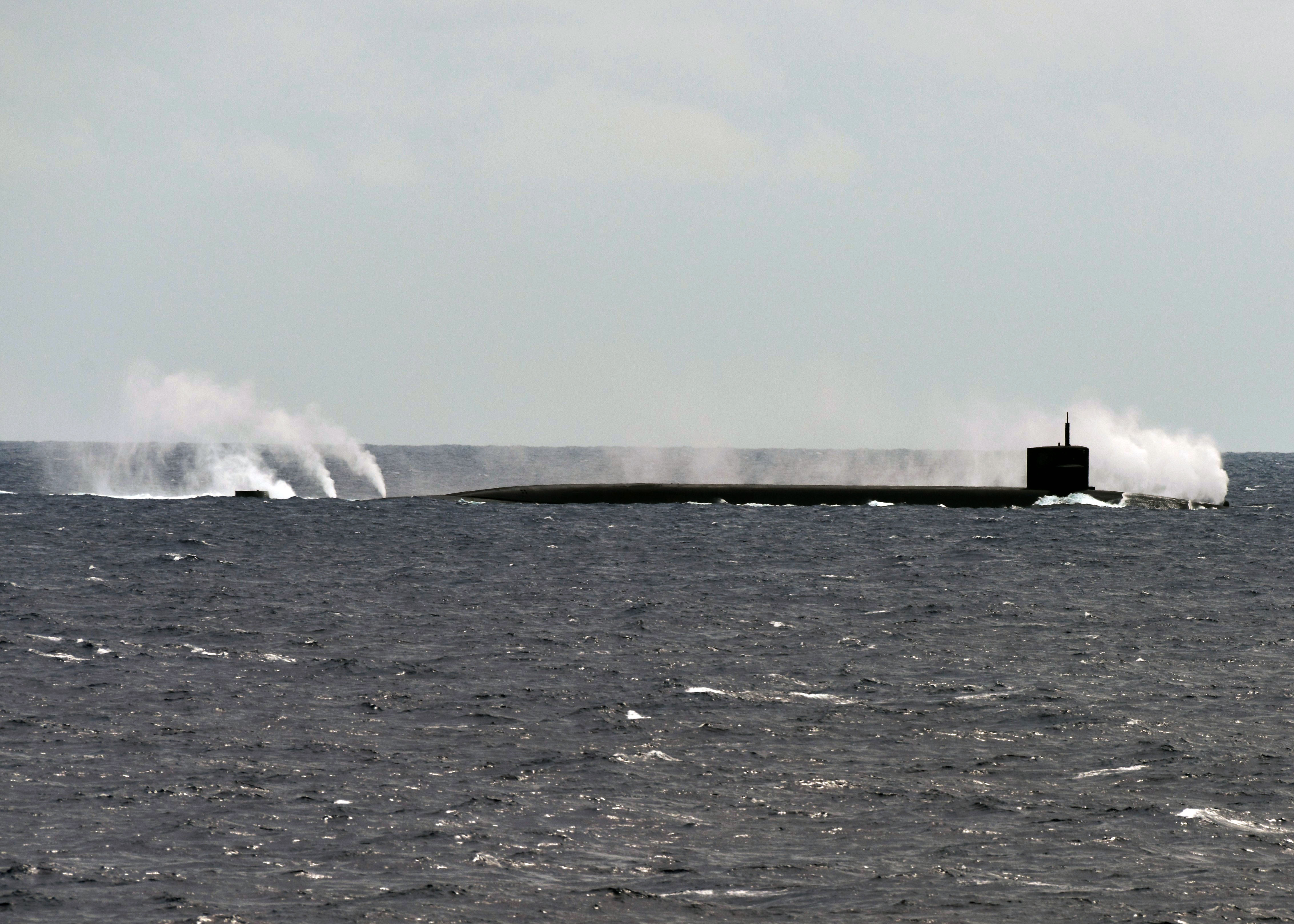 The Ohio-class fleet ballistic-missile submarine USS Maryland (SSBN 738) off the coast of Florida ON Sept. 31, 2016.

The Program Executive Office for Submarines is working to create schedule and cost efficiencies on the Ohio Replacement (Columbia class) Program to counteract inevitable delays during construction, he said last week.

Rear Adm. Michael Jabaley said at the Naval Submarine League’s annual symposium that the first ship in the Navy’s most important acquisition program absolutely had to deliver on time – even though previous delays during early design work complicated that task.

“The biggest problem we have is there is no margin between the decommissioning of Ohios and the delivery of Ohio Replacements. And anyone who has been involved in shipbuilding knows that there will be unknowns that pop up and cause delays to the schedule,” he said.
“So my job is to try to buy margin back into that schedule so that when the inevitable unknown presents itself it’s not a fatal collision within the construction plan. So to buy that margin back into the schedule, we’re looking at targeted elements of the ship where we can accelerate construction through the use of advance procurement funding or advance construction authority to start those parts earlier and de-risk that schedule.”

PEO Subs is working with Congress to get needed contracting authorities and advance procurement and advance construction funding, and Jabaley said that effort will ultimately “provid[e] a significant benefit for schedule de-risking.”

To reduce the risk of the program from a cost standpoint, Jabaley said the Ohio Replacement and Virginia-class attack submarine program officials – as well as nuclear-powered aircraft carrier personnel in some cases, and the prime contractors and vendor base that support all three ship programs – are working together to align material purchases and construction schedules.

On materials, Jabaley said “we the government have to get the volume discount that should accrue by combined purchasing of all the things you’re going to need for the two different classes of submarines, and here’s where the carrier comes in because a lot of the components are similar or identical on the carrier when you get to the nuclear power plant, nuclear shipbuilding concerns. … That’s a volume discount price that we need to take advantage of. In order to do that, we have to reinforce with our vendor base that this mountain of work is facing them as well and that they need to ensure that their quality, their cost and their capacity is ready to accomplish that.”

The admiral noted that PEO Subs has conducted an analysis of the top 25 suppliers to the submarine programs and is working with them to make sure they are ready to execute an increased workload and provide fair volume discounts. Within the government, Jabaley said the program offices are working to ensure that requirements are written such that the SSBNs, SSNs and nuclear carriers can all share parts such as chilled water pumps. This type of multi-program procurement would require special contracting authority that the Navy will brief lawmakers on and seek approval in the next year or two, Jabaley said.

As the Ohio Replacement Program moves towards construction – and as the Virginia subs become larger and more complex with the addition of the Virginia Payload Module and acoustic superiority design changes, the Navy is working closely with builders General Dynamics Electric Boat and Newport News Shipbuilding to finalize plans for facility expansions, manpower and training plans, and simulations of how components for two or three ship classes will move through the yards without conflicting with each other.

Jabaley said the final teaming arrangement between Electric Boat and Newport News would be outlined in the ship construction contract, but he said he expects the arrangement to largely mirror how they collaborate on the Virginia subs. This unified strategy, across two yards and two submarine programs, means the Navy can pull more levers to achieve a common good – an early example being the announcement that Newport News would deliver more attack subs to free up Electric Boat to take on more Ohio Replacement work.

Where feasible, each yard will work on the same parts of ORP as they do on the Virginia class, he said.

“The key here is relying on what has already become a center of excellent in one location and continuing to focus on that.”

For all the planning the PEO has done to ensure future program success, Jabaley said ORP is at a precarious situation right now. It needs four things to happen in concert, with two of them being out of the Navy’s control: Milestone B approval to send the program into engineering and manufacturing development and system acquisition, which the Pentagon is expected to approve this week; a contract award to complete the ship design, which is still in negotiation between the Navy and the shipyards; a transition from research and development dollars to shipbuilding and conversion funds, which happens in the Fiscal Year 2017 budget; and the actual appropriation of FY 2017 funds, which has not yet occurred. Jabaley said the program can get along under the current continuing resolution until the end of the calendar year, but starting 2017 without a proper funding bill will bar the service from the shipbuilding dollars it needs to pay for design work under the impending contract and move forward with post-Milestone B activities.