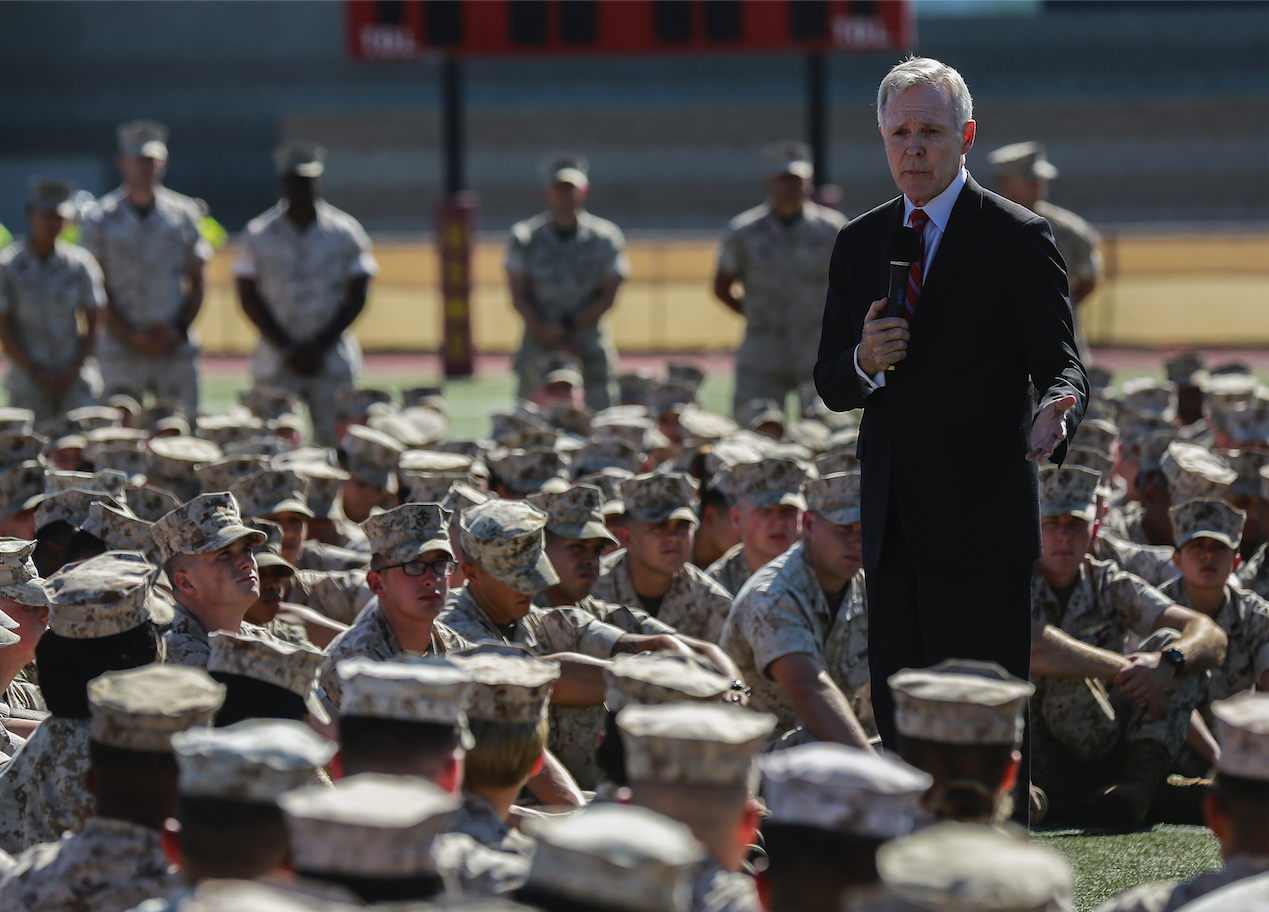 Secretary of the Navy Ray Mabus speaks to Marines and Sailors at Marine Corps Base Camp Pendleton, Calif., Oct. 19, 2016. US Marine Corps Photo

CAMP PENDLETON MARINE CORPS BASE, Calif. — On a self-described “sort of a thank-you tour,” Secretary of the Navy Ray Mabus told a crowd of Marines that changes implemented during his tenure have bettered and strengthened the Marine Corps and is preparing them for the unpredictable future operational environment.

“You are the greatest expeditionary fighting force in history. It’s your job and mine to make sure that it stays that way,” Mabus told several hundred Marines gathered around him on a sun-splashed athletic field at Camp Pendleton’s mainside headquarters.

Mabus, who earlier in the day met with sailors aboard amphibious assault ship USS America (LHA-6) at Naval Station San Diego, hit on his four key platforms — people, platforms, power and partnerships — that he’s focused on through his nearly eight years as the service secretary. He is speaking with sailors in Bremerton, Wash., on Friday and will do similar visits in coming weeks with sailors and Marines in upcoming trips to the Midwest and East Coast.

Since his appointment as Navy secretary, Mabus along the way has taken flak for his some of his actions and positions in several controversial subjects. That includes pressing for “don’t ask, don’t tell” repeal and marriage equality and opening infantry and all other jobs for any qualifying woman, subjects that critics have blasted as social engineering of the military. Other critics have complained about heavy costs and unrealistic expectations in his push for “greener” technologies to save money in energy costs and reduce environmental impacts on the changing climate.

The services shouldn’t fear change and must not get complacent, he said to reporters after the speech. “It’s human nature not wanting to change,” he said, so he’s bent on explaining the “why” and how “it has to do with being better warfighters… and being a better force.” In his previous visit to Camp Pendleton in April, he explained to infantry Marines his position and the Defense Department’s decision to lift all gender exclusions in all military jobs.

In every job during his long career, in “every place I’ve made the changes I thought were necessary to make it a better organization. And every place, you meet resistance. Every place, you get criticism,” said Mabus, a former Mississippi governor who spent two years as a naval surface warfare officer. “One of the ways I measure how well I’m doing is how much criticism I’m getting.”

If Marines have an issue with something, he added, “they’ll tell you their concerns and when the decision is made, they move out… faster than anybody.”
“As I look back, I don’t look at obstacles,” Mabus said. “I look at accomplishments… Yeah, we’ve had some rough patches and you take some incoming fire from time to time. But I’m a volunteer, not a draftee.”

When he was young and first wanted to go into politics, he told Marines, his father didn’t want that of him but eventually gave him piece of advice: “Always be honest. Be honest about what you do and be honest about yourself.”

As SECNAV, Mabus has seen the Navy’s fleet shrink even as the service got another 41 new ships under contract. The fleet is slowly growing, getting to 300 ships by 2019 and 308 ships by 2021, Mabus said. That includes the much-needed amphibious ships the Marine Corps depends on to get troops overseas and maintain its mobile, expeditionary presence. “We’re going to get back to 35 amphibs for the Marine Corps,” he sad.

“It gets you to the fight in different ways, to have your equipment sets there, to make sure that you get to do what you need when you go ashore,” he told the Marines.

Energy savings has been a big focus. When global oil prices hit $140 a barrel, Mabus told the Marines, the hit on the budget forced military officials to decide between paying for operations or for training. While prices have dropped, he said, it’s certain to rise again, so the services must take measures to lessen that next hit. In 2009, he set energy goals for the Navy and Marine Corps to draw at least half of its energy needs afloat and ashore from non-fossil fuel sources including renewable technologies. This year, the services hit that mark. More power-saving technologies, like diesel-electric plants in new ships, so far have slashed the Navy and Marine Corps’ big bill for fuel to 30 percent, and he said he’s confident it’ll reach 50 percent by 2020.

Reducing that dependence on oil and the energy grid also will boost theU.S.’s warfighting edge, Mabus said. Energy can be used as a weapon, he explained, as shown in Russia’s actions against Crimea and Ukraine, two areas with vast oil and gas reserves. And it’s not just about money. Reducing dependence on fossil fuels will save lives lost just to keep combat forces supplied with enough fuel and safe from enemy attack,Mabus said. One Marine died or was wounded for every 50 fuel resupplies in Afghanistan, “way too high a price for that.”

“Marines lead the way,” he said, noting ongoing experimentations with the use of technologies like foldable solar panels and knee braces that generate electricity to power radios and GPS devices. “Marines are making energy where you are. Marines are making energy where you fight, and that way we don’t have to have those convoys of fuel coming in,” he added.

Marines are a critical part of the growing military partnerships across the world, he said, noting that deployed Marines often “are the only Americans a lot of partners will ever see,” said Mabus, who’s traveled 1.3 million miles in visiting 152 countries, including 12 trips to Afghanistan. Training and exercising with allies and partners help build trust, overseas and at home. “When you are doing your job, and you’re a long, long way from home, the American people don’t get to see how hard of a job we ask you to do, every single day,” he said, “and they don’t see how good you are.” It’s important to build the bridge and partnership with the American people, he added.

The demand for deployed and combat forces remains strong, even after 15 years with two land wars and with longer, more unpredictable deployments. “We have stressed you in just about every possible way, “Mabus told the Marines, “and we’ve stressed your families, too.”

“Now, the world gets a vote, and it’s not always going to work that way, but we are trying to make it more predictable for you and your families.”
During a short question-and-answer session, a Marine lance corporal asked Mabus about rising tensions with Russia. It’s a “concern,” the secretary replied, and a worry like others, including China, North Korea, Iran, the Islamic State, Libya and “lone wolf” terrorist attacks. “We can’t tell what’s next, we can’t tell what’s going to come over the horizon,” he said, “but what we can do is make sure you’ve got the equipment to meet anything that comes over and make sure you’ve got the training…and make sure that we are forward deployed so that you can meet anything that comes over the horizon.”

“Every single ARG (amphibious ready group) that goes out has to face something that they didn’t expect,” Mabus said, responding to a sergeant’s question about the future force. So training must be flexible, not rigid, and platforms “must do multiple missions” and not get locked into just doing what’s expected. “We’ve just got to be as we always have been: Flexible, adaptable and ready to overcome,” he added.

Most Americans have little support for deploying ground troops to the Middle East, where are training, advising and assisting local military units,Mabus said after a sergeant asked why Marines haven’t been asked to “wipe out ISIS.” “ISIS is being squeezed right now,” Mabus said. “At the end of the day, it’s going to have to be the people who live there to carry the fight.”
“The problem with ISIS is it metastasizes,” reaching throughout Africa and to the Pacific, he said. “What we’ve got to do is to be able to confront it” without putting many Marines in the front lines of combat. While Marines always face the possibility of high-end combat in the future, just as the prospects of irregular warfare and humanitarian operations, he added, “one of the main things you are trained to do is to deter, is to make people think twice of attacking the United States… Our job is to be ready and to do whatever the leadership of this country tells us to do.”

A female Marine lance corporal said she’s LGBT and asked Mabus about how the services or the VA will handle transgender service members. “We’ve just accepted people for who they are. Now we are asking everyone to accept people as who they wish to be,” she said.

Mabus said the services are working through the transgender issue just as it did with DADT’s repeal. He added that transgender troops may be a “small number,” with as few as seven in the Marine Corps, but whatever the number, “we can figure out ways to handle.”