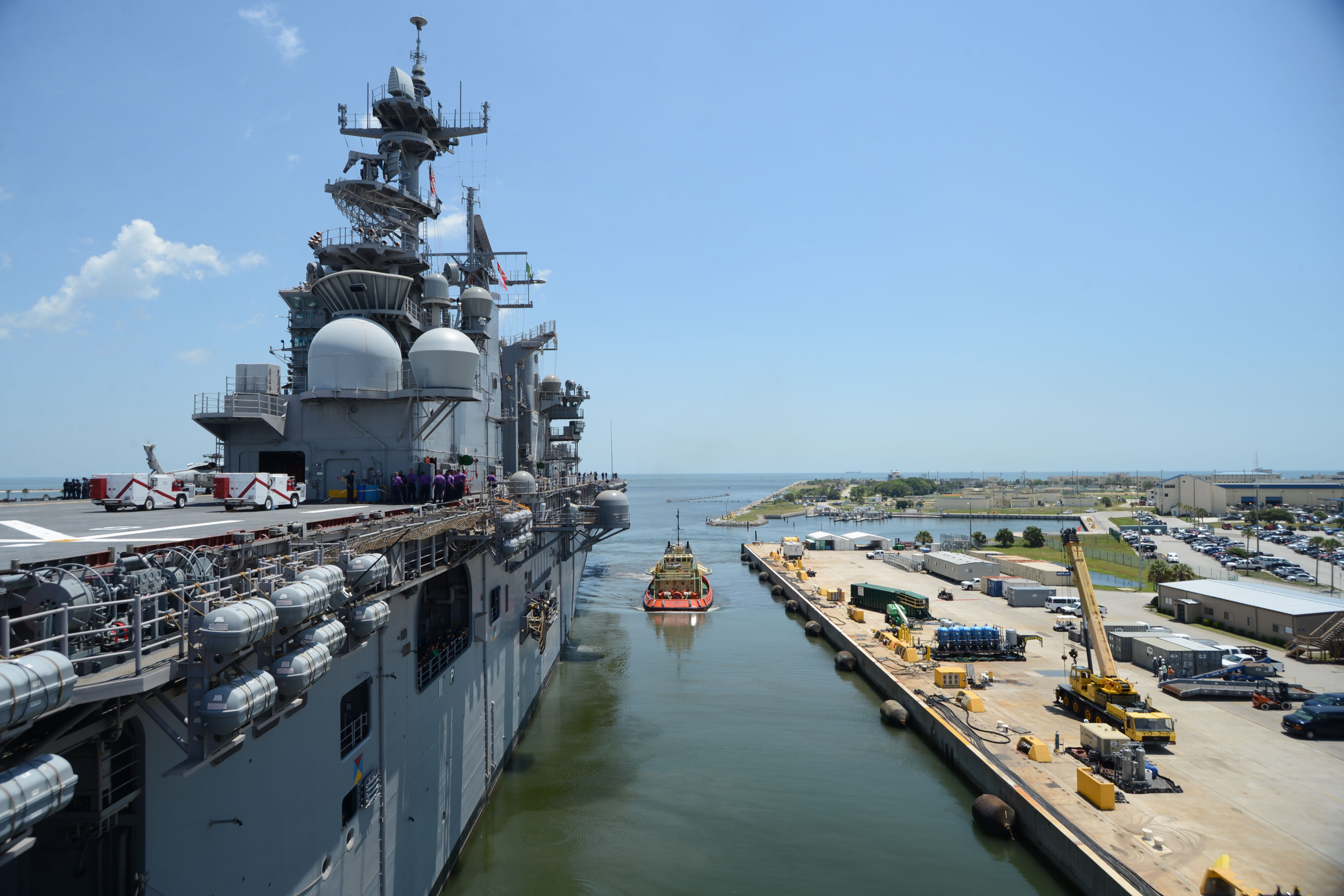 Three warships have scrambled from Naval Station Mayport, Fla. ahead of the landfall of Hurricane Matthew later this week, a service official told USNI News on Wednesday.

“The current track of the storm indicates sustained winds of 40-45 knots in the Mayport basin later this week,” said U.S. 4th Fleet commander Rear Adm. Sean Buck in a statement provided to USNI News.
“The decision to sortie was made early to allow sufficient time for the ships to prepare adequately and sail to safe waters.”

Six ships of the 15 homeported at the Florida base will remain in port through the storm.

The service is still assessing if it needs to send ships to sea from Naval Station Norfolk, Va. as the Category 4 storm is set marches north parallel to the East Coast. 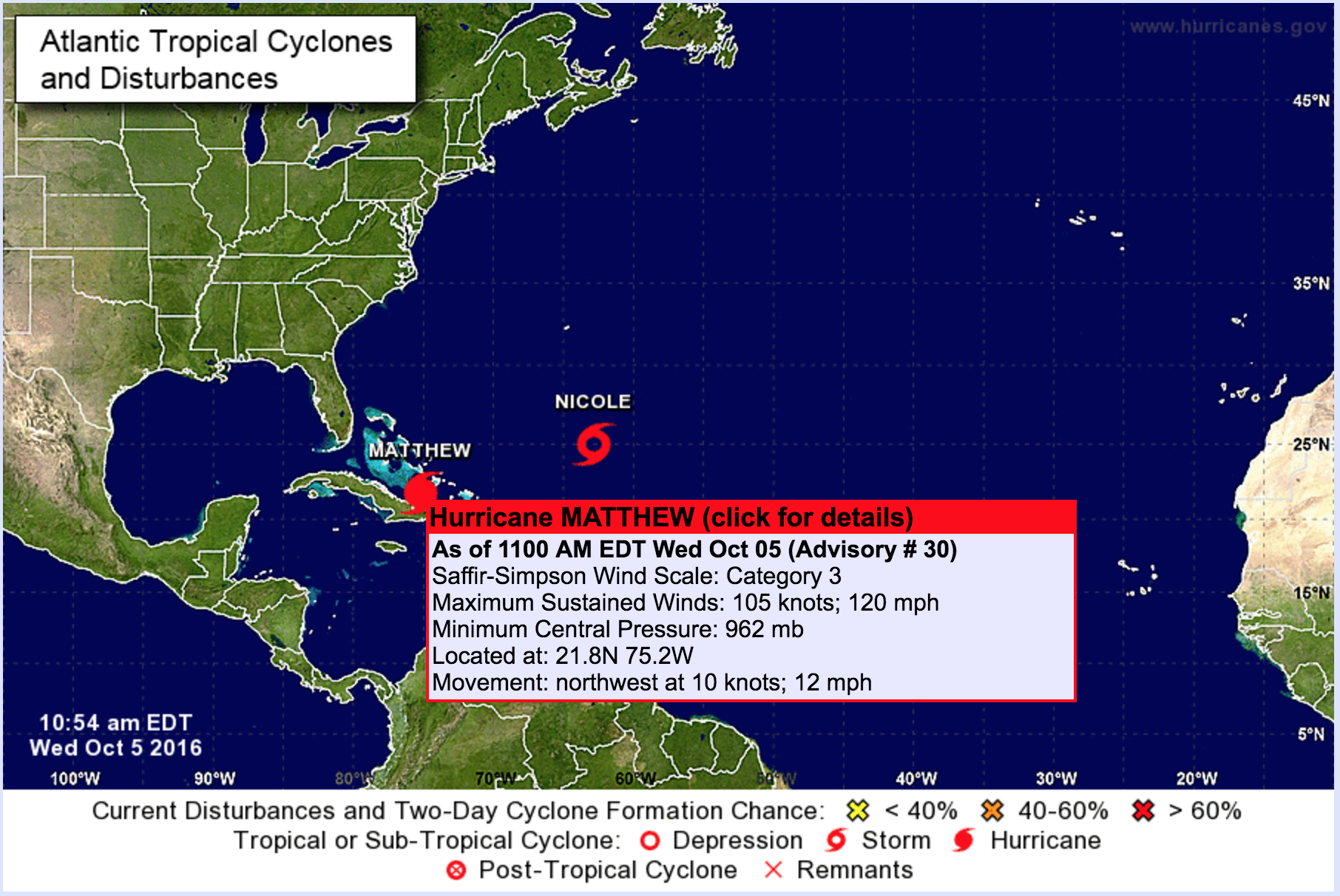 The ship moves come as the Navy is preparing assets for a likely humanitarian aid and distance relief (HADR) mission in Haiti.

The Navy is also preparing the hospital ship USNS Comfort (T-AH-20) to deploy for relief operations.

Hurricane Matthew is heading toward the Bahamas and officials in Haiti are still assessing the extent of the damage.

“Emergency teams in Haiti struggled Wednesday to reach hurricane-ravaged areas cut off by washed-out bridges and mudslides after Hurricane Matthew roared over the nation’s western tip and began a devastating island-hopping path that arcs toward the U.S. coast,” reported The Washington Post.
The country has yet to recover from the 2010 earthquake in which 200,000 died and thousands still live in temporary shelters – many in the path of the Matthew — six years later.

Since Monday, Hurricane Matthew has made landfall in Southern and Western Haiti as a Category IV Hurricane, with maximum sustained winds estimated in excess of 145 mph near the center of the storm. It is expected to travel parallel along the Florida coast as a Category III hurricane before turning northeast, with the storm passing by the Mayport basin late Friday.

Rear Adm. Sean Buck, COMUSNAVSO/C4F has directed three ships to sortie by this afternoon in response to Hurricane Matthew; the sortie is ordered to reduce the risk of significant damage to ships and piers during extreme weather conditions such as high winds and seas.

“The current track of the storm indicates sustained winds of 40-45 knots in the Mayport basin later this week,” said Buck. “The decision to sortie was made early to allow sufficient time for the ships to prepare adequately and sail to safe waters.”

Two of the three ships have already sortied from Mayport; USS Anzio (CG 68) and USS Montgomery (LCS 8). USS IWO JIMA (LHD 7) will sortie late this morning; all three will travel north and east to ride out the storm.

USS Zephyr (PC 8) and USS Shamal (PC 13) have moved to a safe berth in the basin; while USS Tornado (PC 14) and USS Farragut (DDG 99) will remain in dry-dock for maintenance availabilities.

USS The Sullivans (DDG 68), USS New York (LPD 21), USS Fort McHenry (LSD 43), and USS Milwaukee (LCS 5) will shelter in place in the Mayport basin and will take extra precautions to avoid damage, depending on the severity of the weather. These options include rigging additional mooring and storm lines, disconnecting shore power cables and/or lowering the anchor.