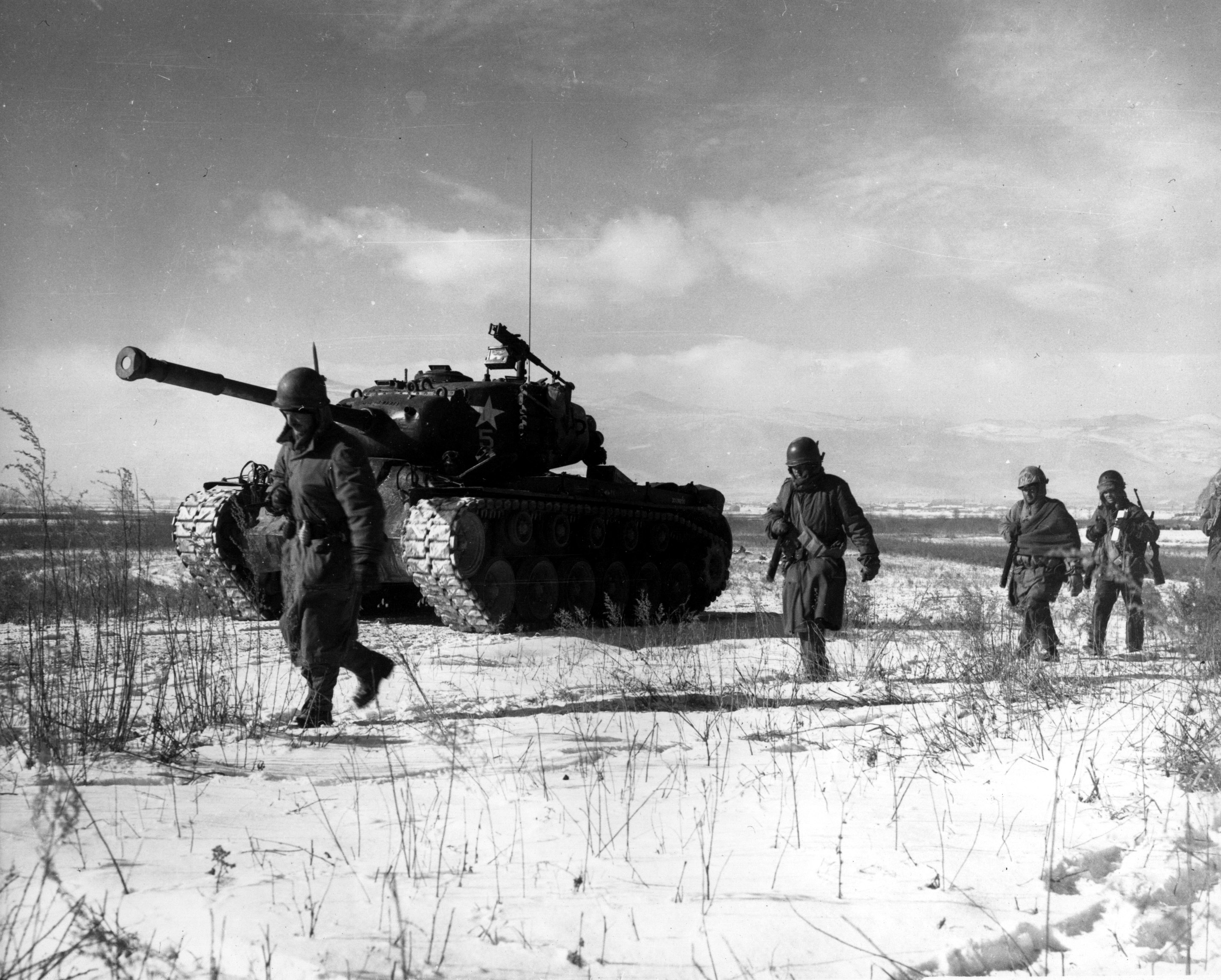 MARINE CORPS MOUNTAIN WARFARE TRAINING CENTER, Calif. — As military operations go, the 1950 campaign for the Chosin Reservoir in North Korea wasn’t an extended battle. Coming just two months after the famous amphibious landing at Inchon, the mission to recapture the reservoir in the north put the 1st Marine Division up front for a quick, late-autumn offensive.

But the mission to take Chosin (called “Chanjin” in Korean) from the grip of a larger force of entrenched communist Chinese troops – as many as 120,000 or more – soon became a defensive operation. Top commanders ordered the outnumbered force of some 15,000 Marines, U.S. soldiers and Republic of Korea forces to turn back onto the main supply route and return to ships and bases in South Korea. “Retreat, hell, we’re just attacking in another direction,” Maj. Gen. Oliver P. “O.P.” Smith, the 1st Marine Division commander, reportedly told a journalist.

The frigid winter accosted a force ill-prepared. Over several weeks, some 4,500 Marines died, some in battle, others from the sub-zero climate and windswept snowstorms. More than 7,000 others suffered from frostbite and other wounds – long-term pain felt by survivors still to this day.

“We have only about 1,400 men left, and we are growing old and weary and many still suffer from battle injuries and frozen limbs caused by the bitter northern cold and the war,” said retired Lt. Col. Jean P. White, a member of Oceanside, Calif.-based The Chosin Few who as a sergeant fought at Hagaru-ri and Koto-ri during the campaign. The group’s recent reunion in August might well be one of the final gatherings as its ranks thin from age.

But Chosin’s place in Marine Corps history and lore – some 14 men received the Medal of Honor, half of them posthumously – is notable in the foundation the following year of the Marine Corps Mountain Warfare Training Center.

Just months after returning home, the Marine Corps established the “Cold-Weather Training Center” on national forest land in the eastern Sierra mountains near Bridgeport, Calif., 450 miles north of Camp Pendleton, Calif. The goal? Prepare Marines heading to Korea for the mountainous and frigid environment (and get them clothing, gear and equipment they had lacked to keep them in fighting form). Up until then, the service largely had tapped Army publications, experiences and even gear to prepare Marines for cold-weather operations.

The first Korea-bound Marines arrived in Bridgeport on Sept. 22, 1951. Since then, even after it stopped most courses during the Vietnam war, the center has trained a half-million Marines on its alpine peaks, verdant valleys, cliffs and rivers, in the deep snows of winter and sunny days of summer. 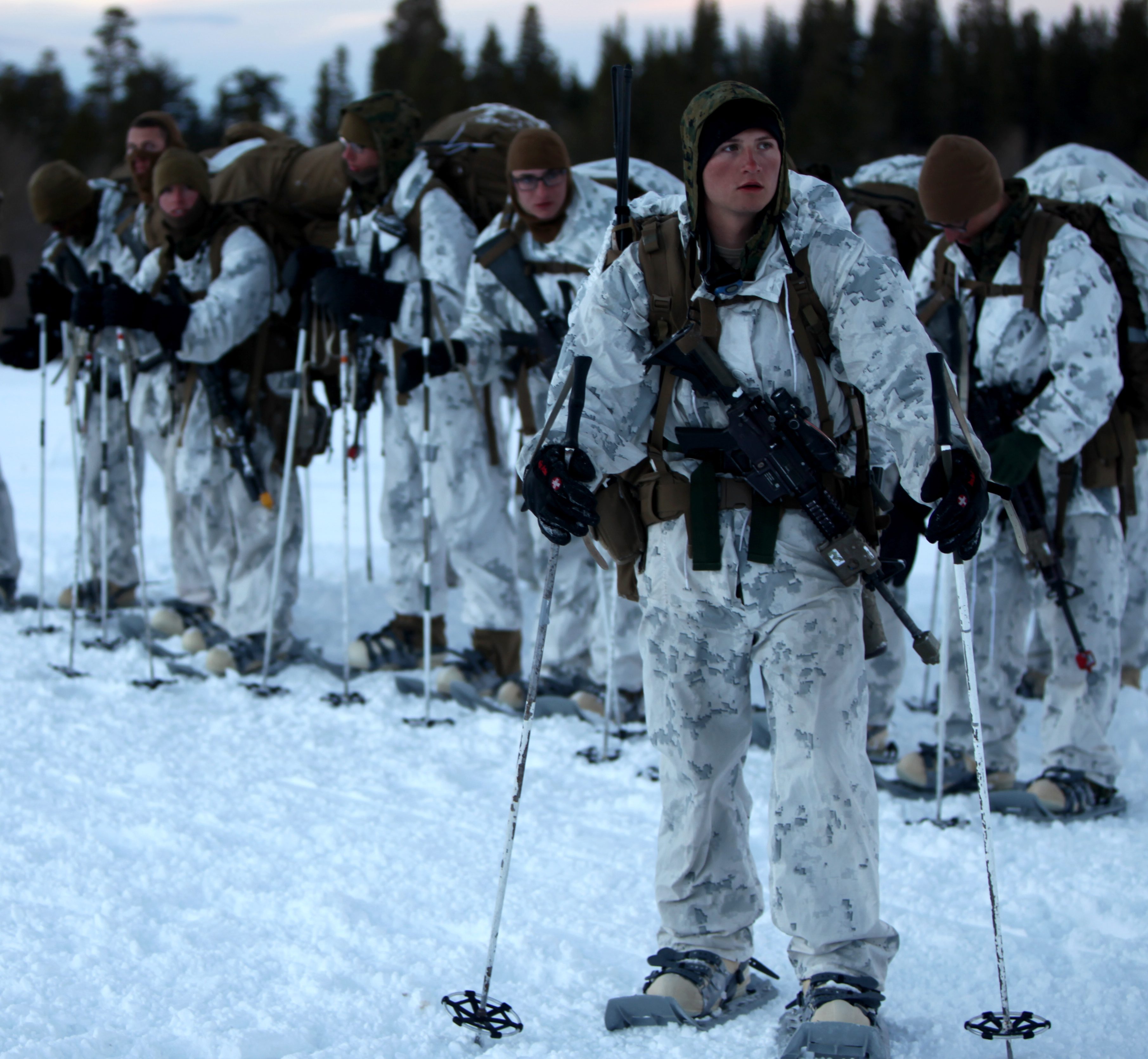 Marines check their gear before continuing a hike up in the Sierra Mountains during cold weather training at Marine Corps Mountain Warfare Training Center, Calif. on Jan. 21, 2016. US Marine Corps Photo

Last week, Marine Corps officials and Bridgeport veterans marked the MWTC’s 65th anniversary. It’s far from retirement. Veterans say that generations later, its relevance remains strong today, even with irregular warfare and transnational terrorist threats, as Bridgeport provides an austere environment that can be extreme in cold and heat. “They learn to fight in every clime and place, so it’s extremely relevant,” said Maj. Paul Mann, MWTC’s operations officer.

Lt. Col. Juan “Jamie” Moreno, MWTC’s executive officer, said the training still “toughens up” the individual much like the Chosin-era experience in the spirit of the late Maj. Gen. Lewis “Chesty” Puller. Here, in the remote mountains, “you can train, I think, without an enemy trying to kill you,” Moreno said, “and where the environment is harsh enough you think the environment is going to kill you and is a real threat.”

Combat operations in Afghanistan reconfirmed the value of exposing and training more Marines to operate in mountainous terrain, high altitudes and extreme weather, said retired Maj. Gen. Orlo K. “O.K.” Steele. Steele first trained at Bridgeport as a private first class in 1956 and later worked at the center. He retired in 1990 after a 35-year career and, in 2011, coauthored a historical book on MWTC.

Regardless of who is the enemy, the center’s core purpose is to train and prepare Marines to “hit them where they ain’t,” Steele said. Mountaineering skills like cliff assault, rappelling and crevasse crossing can ready them to operate in enemy-held terrain or get access to places that might be lightly defended.

From the headquarters base in Pickel Meadow at 6,800 feet, the MWTC training area reaches peaks of 9,000 to 11,000 feet and across the Sonora Pass, at 9,624 feet the second-highest crossing of the Sierra Nevada range and closed by snow each winter. It’s located along the 38th parallel, like Korea’s Demilitarized Zone, interestingly. What Bridgeport offers “can’t be duplicated anywhere else in the United States,” said Steele. 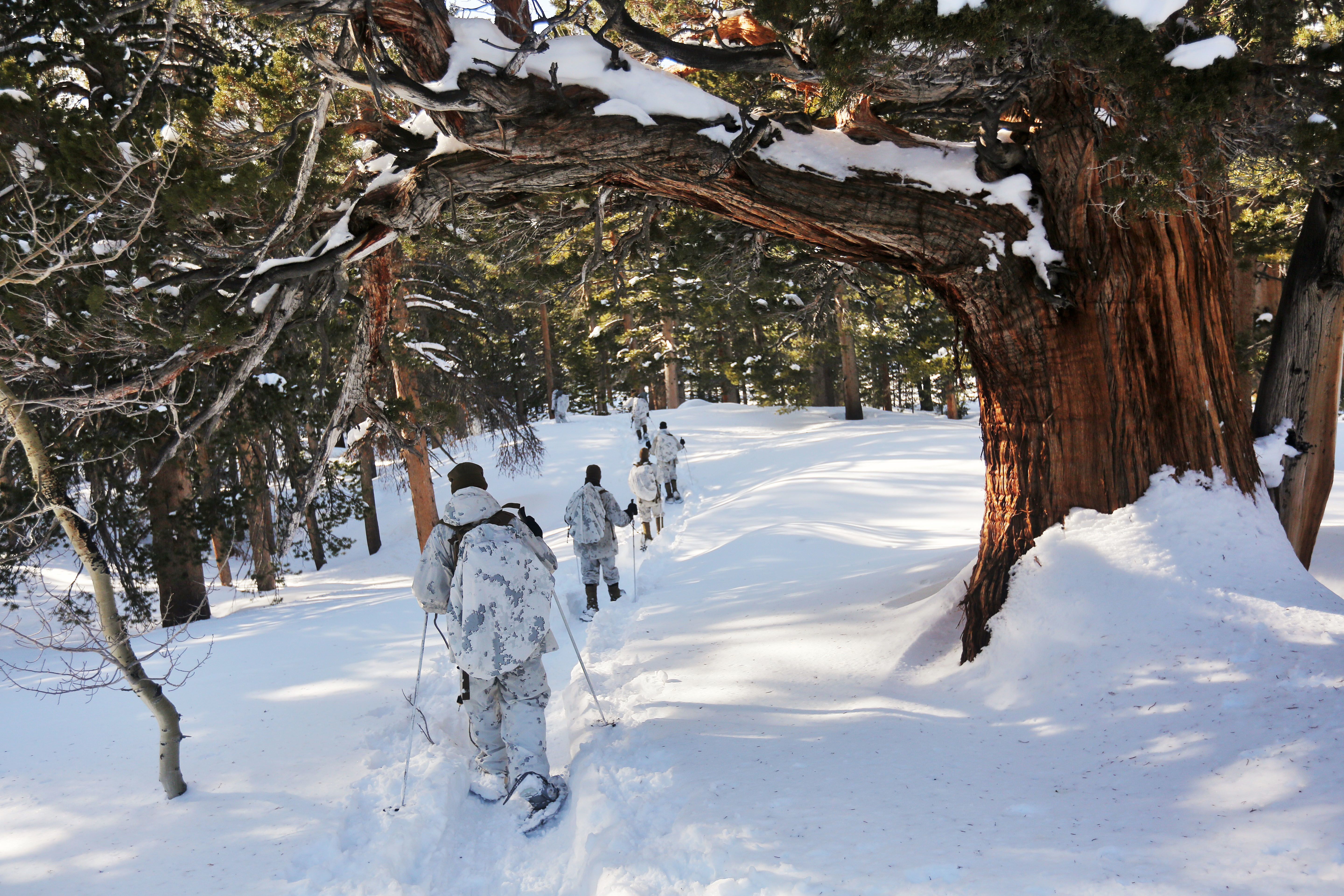 Marines with Alpha Company, 2nd Assault Amphibian Battalion, conduct a patrol as part of an avalanche scenario at the Mountain Warfare Training Center in Bridgeport, Calif. on Jan. 20, 2016. US Marine Corps Photo

Training isn’t for the faint at heart. The altitude alone can knock down Marines with acute mountain sickness. “It takes about 30 days to get acclimatized to the altitude, because this terrain will really wear you out,” said Henry Vozka, a retired gunnery sergeant and former instructor from 1959 to 1962 who taught Mountain Leadership School, unit training and the Evasion, Escape and Survival (aka “E&E”) course. Students are smart to prepare physically, “because this place will really kick your butt.”

“It’s hard for the low-landers to come up with the time-space factor, and the cold weather decreases your strength,” Vozka said.

Infantrymen, in particular, “learn a whole new set of time and space factors here,” Steele said. Moving through deep snow is not a fast feat, but snowshoes or skis and basic know-how “can even restore your mobility.”

“Everything takes a longer time,” he said, so unit staffs barking Marines to hustle “have to get an appreciation of that.” It takes a long time to be able to build one’s skills and abilities, even simple tasks. Steele recalled that as a student, it took him 30 minutes to lace his boots, working ice-covered eyelets with gloved hands, otherwise his fingers would freeze, and digging out tents, weapons and skis buried in snow. The mountainous terrain forces Marines to operate as smaller units, further challenging challenges command, control and communications, he said, so “it becomes a decentralized form of warfare.”

Bridgeport is unique within the military. It has the highest-altitude topography of any U.S. military training area, and it’s the only one conducting unit training or service-level exercises, said Steve Gardner, the center’s academic director and a retired gunnery sergeant. In 2010, amid a surge in deploying troops, the center trained more than 16,000 Marines, sailors and other service members, a jump from 10,000 trained in 2000. Last year, that number leveled off to about 7,500, he said. 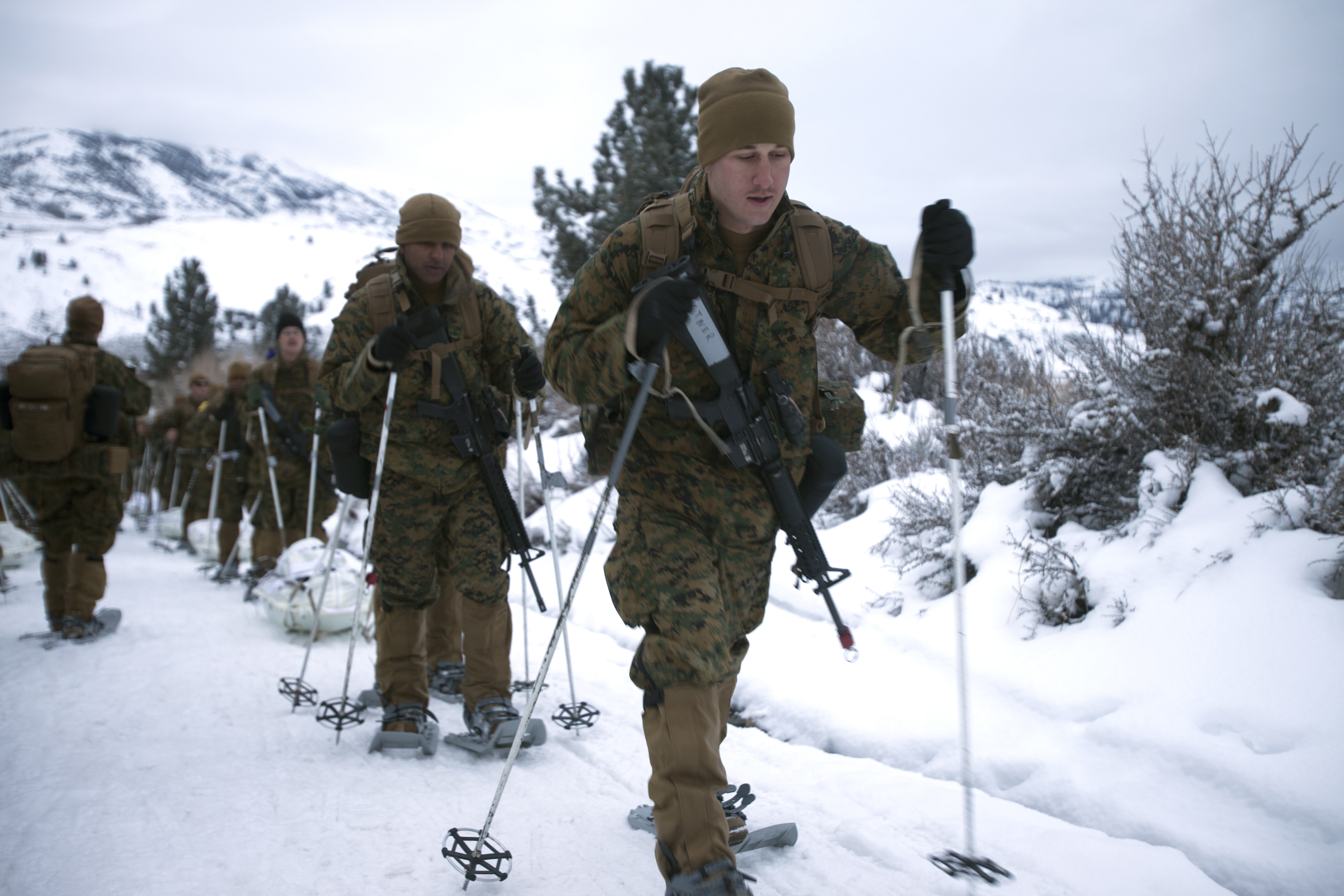 Current and former instructors often say the mountainous terrain helps build confidence as students learn technical skills and sharpen their fieldcraft, like lightly packing essentials. Not every student is comfortable hanging off a cliff, sometimes in the dark. Others are fearful of heights, or struggle in steep terrain. Students quickly realize they must pay attention. “You can’t cheat in the mountains. You cheat, and somebody is going to get killed, and it might be you,” said Vince Lee, a former officer and MWTC instructor and professional climbing guide.

Moreno said few Marines today have slept on snow before they joined, so operating in snow can be a “shock element” to students, at least the first time before they realize they can acclimatize, operate and complete their military tasks and missions, despite the discomfort. “We’re not a ‘survival experience’ in training,” he said.

But the skills and training prepare the Marines to complete their mission in frigid or mountainous environments, and decades after Chosin, that need remains strong. While Marines regularly train on Japan’s Mount Fuji and in South Korea, Moreno noted, forces also must be ready to defend NATO nations, including Norway where the service maintains prepositioned stocks and conducts the annual bilateral exercise Cold Response. So proficiency in mountaineering and operating with shoeshoes or skis is critical for those units, Moreno said. Whether there’s snow or not, the value of training in a high-altitude environment “is just as valid. There’s just as high as a demand.” 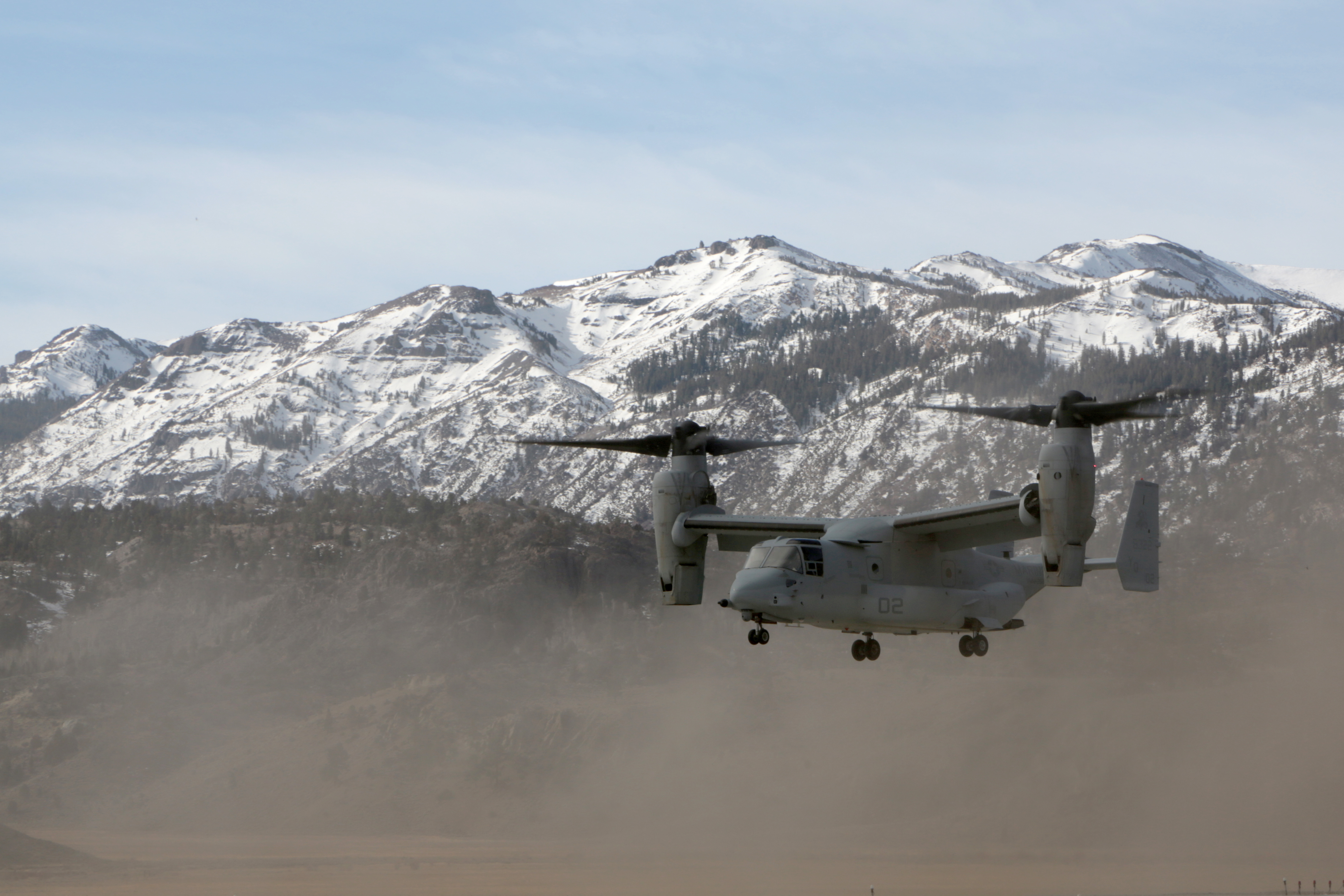 Steele, who commanded the Camp Lejeune, N.C.-based 2nd Marine Division in the 1980s, said the Norway mission was “our most likely contingency,” and it took the most training time to prepare the Marines. British Royal Marines and Norwegian forces helped guide their training, improve the gear and lighten the load by some 40 pounds for infantrymen, he said. “We got very, very good at moving cross-country over snow-covered terrain,” Steele said.

It was a change from the “Frozen Chosin,” a generation earlier.

With hopes of quashing Chinese forces, Army Gen. Douglas MacArthur in late October 1950 ordered allied forces to fight to the Yalu River, on North Korea’s border with China. First, the Marines had to get past the Chosin reservoir. They patrolled as they moved northward, even as South Korean forces went south, and soon faced a huge, heavily armed Chinese force in the mountains. Then higher headquarters ordered Marines to head 80 miles south to military transport ships in Hungnam Harbor – a retreat, a retrograde, really. Marines battled their way in the bitter cold, with temperatures sinking well below zero.

Just that month, in the United States, then-commandant, Gen. Clifton B. Cates, directed that all Marines arriving in Korea starting that spring complete cold-weather training. Training officials at Camp Pendleton organized an initial indoctrination course held in the Big Bear area, east of Los Angeles. But the vast cases frostbite and hypothermia casualties in Korea prompted officials in 1951 to rethink that plan. Months after returning home, with Smith now in command of Camp Pendleton, they decided building a permanent indoctrination training site at Pickel Meadow.

The Marine Corps, in 2009, renewed its 40-year special use permit with the U.S. Forest Service, said Brent Husung, MWTC’s environmental director. “It’s an important post for the Marine Corps, and it’s important for the future,” Steele said.