The following is the Sept 16, 2016 Congressional Research Service report, FY2017 Defense Spending Under an Interim Continuing Resolution (CR): In Brief.

Defense budget experts began discussing the likelihood of a continuing resolution (CR) to start FY2017 early in the second session of the 114th Congress. As the start of fiscal year 2017 (FY2017) approaches, congressional consideration of a CR to fund the federal government through the opening months of the fiscal year is widely anticipated. This report provides a basic discussion of interim CRs and highlights some specific issues for the Department of Defense (DOD) under a CR. It also provides a brief look at selected FY2017 defense programs that could be affected by a CR.

As with regular appropriations bills, Congress can draft a CR to provide funding in many different ways. Under current practice, a CR is an appropriations law that provides either interim or full-year funding by referencing a set of established funding levels for the projects and activities that it funds (or covers). Such funding may be provided for a period of days, weeks, or months, and may be extended through further continuing appropriations until regular appropriations are enacted, or until the fiscal year ends. In recent fiscal years, the referenced funding level on which interim or full-year continuing appropriations has been based was the amount of budget authority that was available under specified appropriations acts from the previous fiscal year. CRs may also include provisions that enumerate exceptions to the duration, amount, or purposes for which those funds may be used for certain appropriations accounts or activities. Such provisions are commonly referred to as anomalies. The purpose of anomalies is to preserve Congress’s constitutional prerogative to provide appropriations in the manner it sees fit, even in instances when only interim funding is provided. 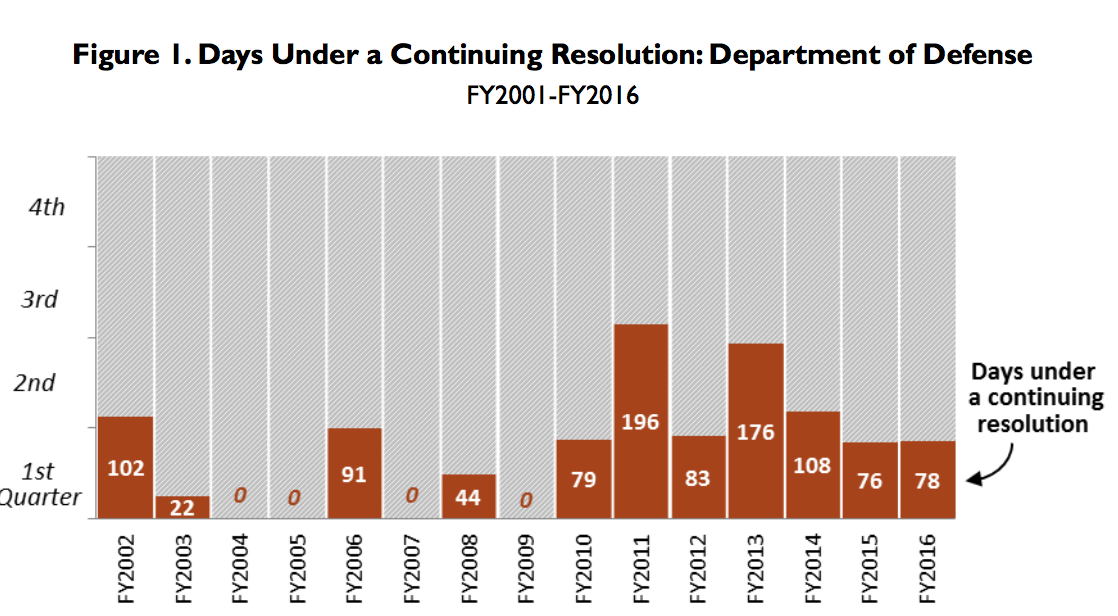 For affected agencies, CRs can create hurdles that would not exist under a full-year appropriation. For example, an interim CR may prohibit an agency from initiating or resuming any project or activity for which funds were not available in the previous fiscal year (i.e., prohibit new starts). In addition, Congress may include provisions in interim CRs to limit the expenditure of appropriations for programs that spend a relatively high proportion of their funds in the early months of a fiscal year. Also, if a CR provides funds at the rate of the prior year’s appropriation, an agency may be provided additional (even unneeded) funds in one account, such as research and development, while leaving another account, such as procurement, underfunded or lacking. This is sometimes referred to as a problem with the color of money.

By its very nature, an interim CR can prevent agencies from taking advantage of efficiencies through bulk buys and multi-year contracts. It can foster inefficiencies by requiring short-term contracts that must be reissued once additional funding is provided, requiring additional paperwork and overhead in contracting actions.

DOD has started the fiscal year under a CR for 11 of the last 16 years and every year since FY2010. The amount of time DOD has operated under CR authorities during the year has increased in the last 6 years and equates to a total of more than 26 months since 2010. This has caused DOD to adapt its programming activities to a truncated budget year. For FY2017, the Defense Department requested $523.9 billion in discretionary funding, as compared to the FY2016 enacted level of $521.7 billion. The Overseas Contingency Operations (OCO) request for FY2017 ($58.8 billion) is relatively close to the FY2016 enacted level ($58.6 billion). While these amounts may seem comparatively small (0.4% and 0.3% respectively), the variance in FY2016 enacted and FY2017 requested amounts by appropriation account may be significant under a CR.