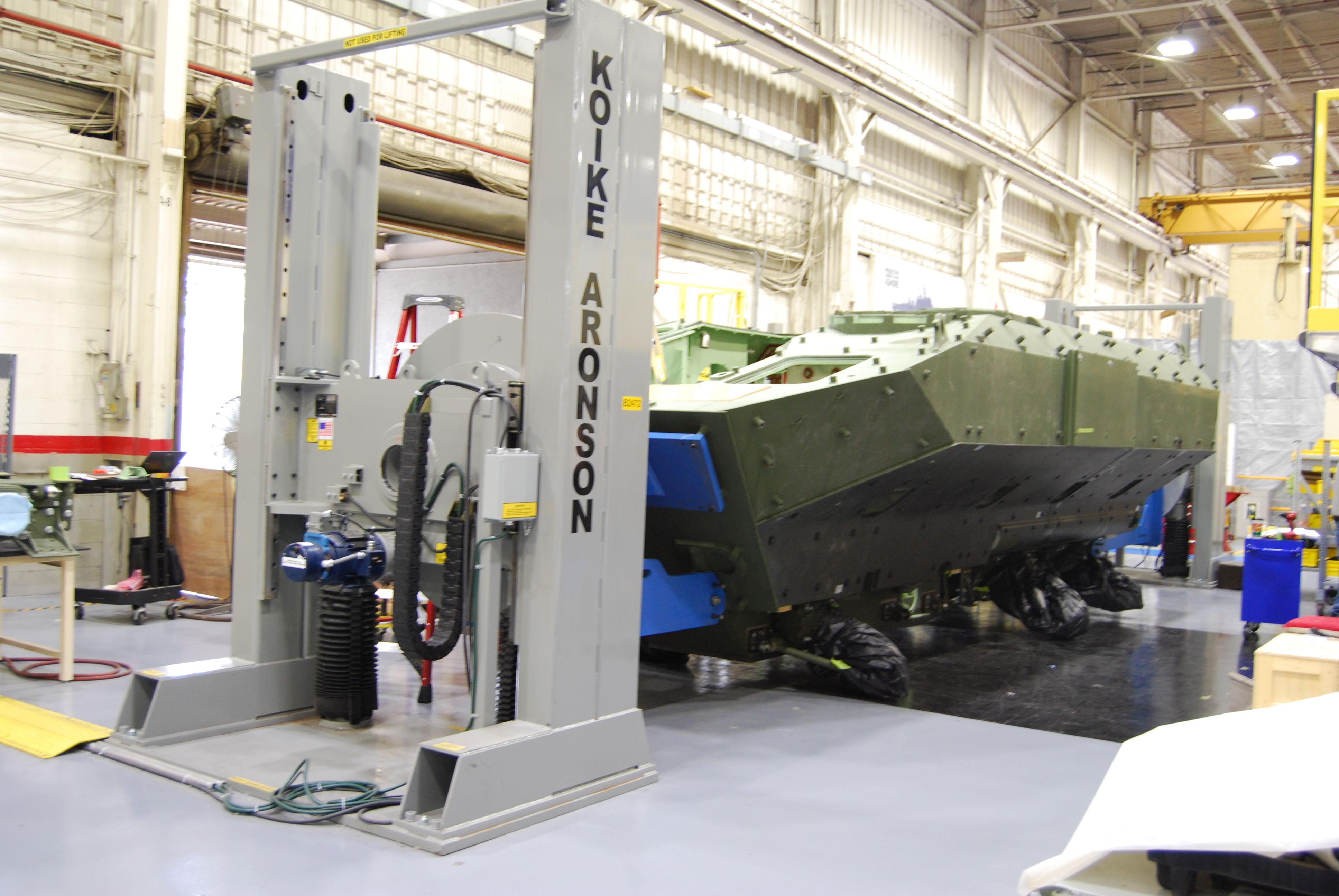 BAE Systems’ first production Amphibious Combat Vehicle is attached to a turnover fixture in the welding facility to allow workers to comfortably weld all sides of the vehicle. BAE Systems photo.

YORK, Pa. — BAE Systems has completed its first Amphibious Combat Vehicle under an engineering and manufacturing development (EMD) contract with the Marine Corps and will bring it to Marine Corps Base Quantico next week for display at the Modern Day Marine exposition.

This vehicle is the first made in a production environment and the first BAE-constructed vehicle with an upgraded engine.

After a five-company competition, the Marine Corps awarded BAE Systems a $104-million contract and SAIC a $122-million contract in November 2015 to build 13 EMD vehicles now, with an additional three per company coming later due to budgeting challenges last year. Government testing is set to begin around April 2017, at which point BAE’s ACV program manager John Swift said his company will have delivered all 16 vehicles to the government and validated their quality through internal vehicle testing.

The vehicles in York begin as sheets of steel, go through the welding facility, into the sandblast and paint facility, into the automotive assembly building and then in for a final paint job before being shipped off to the Nevada Automotive Test Center for internal company testing. In addition to the completed vehicle, three are in automotive assembly and 10 more are in welding, BAE Systems spokeswoman Megan Mitchell told USNI News.

Swift told USNI News during a visit to the York, Pa., production plant last month that the Marine Corps requires a certain level of testing and validation before the two contractors can turn the vehicles over to the government, and BAE has added about 13 items to the test list to ensure a thorough “final validation by us.” The first four production vehicles will spend about two months going through ground and swim tests before being deemed ready for delivery, he said.

During the subsequent government testing at NATC, which Swift called “the heart of the EMD contract,” BAE Systems will send drivers, mechanics and trainers to begin to teach the Marine Corps program office about the company’s offering.

After about 14 months of testing, the program office will select one vendor to build 204 ACV 1.1 variants. 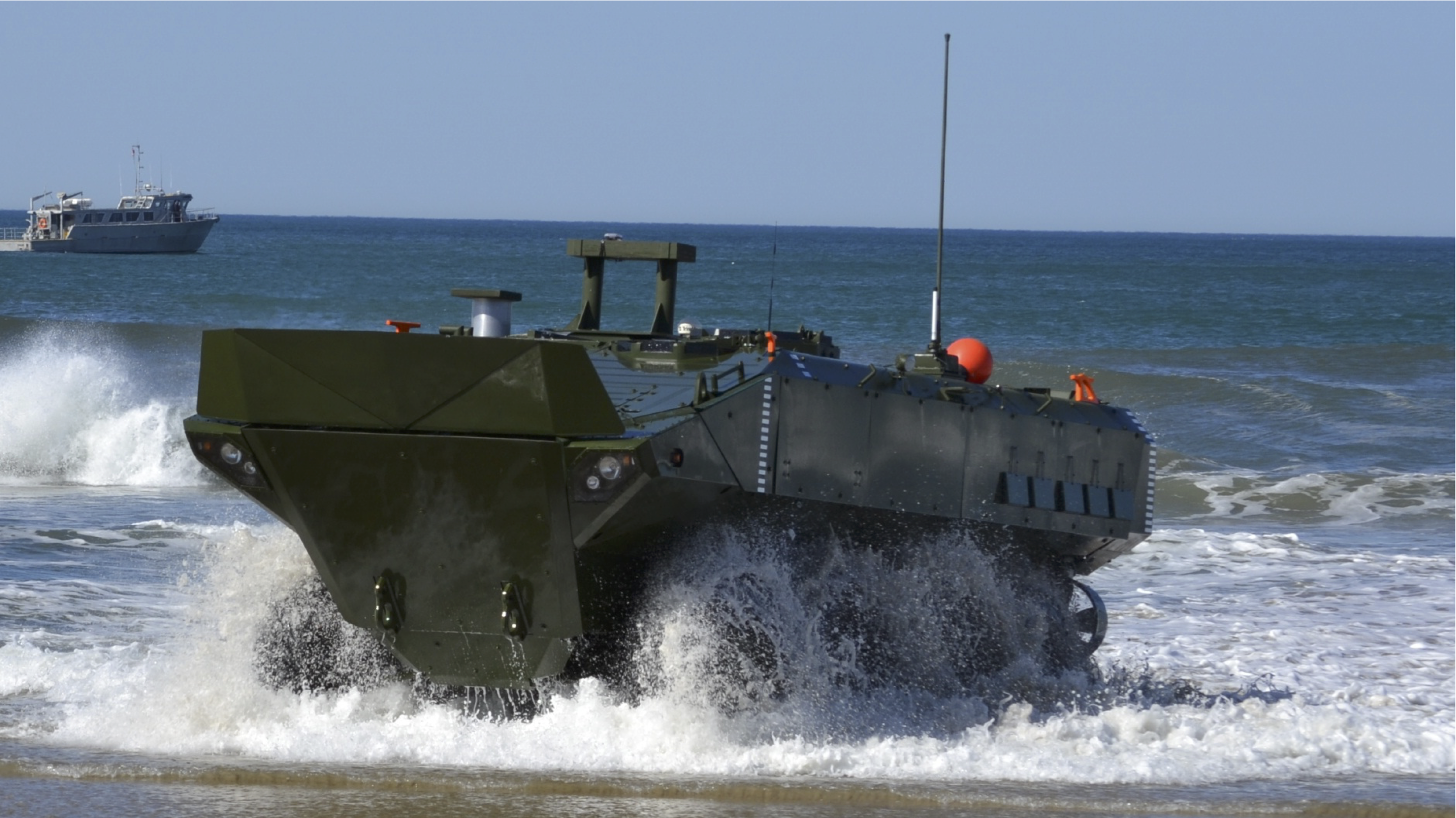 Swift said that BAE Systems from the beginning has kept an eye on full-rate production. The York, Pa., facility has made or modernized more than 8,000 ground vehicles for the Army and Marine Corps and has a modular design to create an optimized production line for whatever contract the company is working on. Though the first three vehicles made during the demonstration phase of the ACV competition were built in Santa Clara, Calif., in a prototype environment, Swift said the company began writing out vehicle build instructions as the prototypes were being manufactured.

Those ideas were combined with lessons learned from a visit to Iveco’s manufacturing plant in Italy, and the end result is a plant in rural Pennsylvania that can build 16 ACVs as efficiently as it could 204. The plant is currently delivering four vehicles a month, and while Swift said that would likely bump up to eight if the company won the ACV competition, the plant could potentially produce 12 or even 16 vehicles a month if needed.

Though the design for the ACV comes from Italian defense contractor Iveco, that company is still awaiting the results of a demonstration phase of an Italian navy competition, which won’t announce an EMD decision until next year. Iveco could leverage BAE Systems’ work on designing a full-rate production plant, but Swift made clear that BAE Systems was not in any way connected to the Italian competition, nor had Iveco yet asked for help on the manufacturing side.

Just as BAE Systems had its eye on full-rate production from the start, the company has also striven for a full ship-to-shore amphibious capability despite lower requirements set for this first increment of the ACV program. The ACV 1.1 is not required to self-deploy from the well deck of an amphibious ship to the shore – the Marine Corps decided to wait and introduce that requirement into ACV 1.2 – but Iveco’s design has a proven ship-to-shore capability and BAE Systems has only made enhancements to the design rather than backing away from the full capability.

In fact, the only change BAE Systems made to the Iveco design was to upgrade the engine from 500 horsepower to 700, which required elongating the engine compartment by about three inches, Swift said. The additional power is not needed now but increases the vehicle’s flexibility to take on future weapons, active protection systems or whatever else the Marine Corps may want to use in the future.

Swift said Iveco wanted to validate the design change with its own internally funded testing, which is ongoing now. The Italian company completed a prototype vehicle in February and brought it to Fiat’s test track in Milan, where the vehicle drove about 3,000 miles. The vehicle has now been sent to the Italian military, where the army will test the vehicle this month and the navy will conduct a series of open ocean swims and amphibious ship launches and recoveries at sea.