The U.S. has increased its role in an air combat exercise, featuring its largest contribution of airpower in more than a decade from the U.S. Air Force and Marine Corps in a practical demonstration of Washington’s, “rebalance to the Pacific.”

Other than the United States and host Australia, Singapore, Thailand, Indonesia, Canada, and France also took part with aircraft, while New Zealand, Germany and the Netherlands sent personnel to participate.

The American contingent included USAF Lockheed-Martin F-16CM fighters and Boeing B-52 bombers, along with a squadron of Marine Boeing F/A-18 Hornets and Lockheed-Martin KC-130J Hercules tankers.

The USAF F-16s and 175 USAF personnel at the exercise were from the 14th Fighter Squadron, normally based at Misawa, northern Japan. The 14 F-16CMs that deployed to the exercise made history of sorts when they became the first operational F-16s to refuel from a Royal Australian Air Force (RAAF) Airbus KC-30A tanker during their trip to RAAF Base Darwin from Kadena Airbase in Okinawa, where the 14th was temporarily based while the runway in Misawa was undergoing repairs.

According to Lt. Col. Mark Heusinkveld, commander of the squadron, the flights from Kadena to Darwin took six hours, with five refuellings in between to ensure the F-16s had sufficient fuel at any time to reach an alternate airfield in case of an unscheduled diversion. 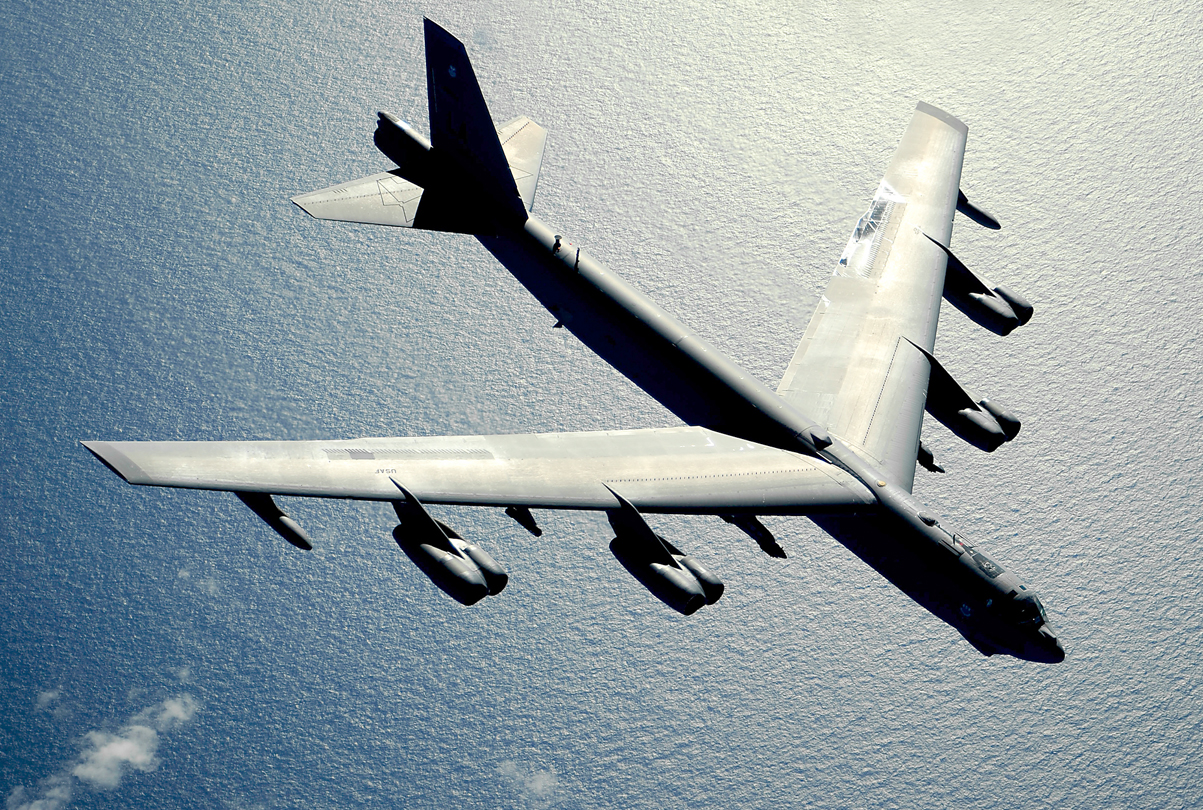 A U.S. B-52 Stratofortress strategic bomber. US Air Force Photo

More popularly known as the Wild Weasel mission, Heusinkveld summed it up as “all about protecting other strike, transport or other mission aircraft from both surface threats as well as air threats to allow them to get to their target unimpeded.”

The participation of the 14th FS also marks the first time a specialized SEAD capability has been brought to Pitch Black, and is perhaps a harbinger of things to come. The RAAF will introduce the Boeing E/A-18G into service in 2017 and is evaluating the JTE for its own use, so electronic attack and SEAD will almost certainly be a part of future Pitch Blacks

The USAF F-16s also flew some defensive counter-air missions as Red Air, providing a “capable adversary” for Blue Air forces. Heusinkveld relished the ability to operate over the wide expanses of Australia’s “Top End,” noting it was rare for his unit to have such a training opportunity in the Pacific, where it can go supersonic and fly at low altitude over land with few air traffic control restrictions.

Just as important was the opportunity to operate with friendly regional air forces, with Heusinkveld telling USNI that Pitch Black was a “great opportunity for us to see the capabilities of people that we don’t often get to train with.” This was true of the USAF B-52s, which were the only exercise participants based out of Australia.

Flying from Guam, where they are deployed to as part of the USAF’s continuous bomber presence in the Pacific, the B-52s undertook simulated precision strike and close air support missions at Pitch Black, attacking targets designated by friendly forces. During a visit to the RAAF’s 114 Mobile Control Reporting Unit, which provided tactical airspace battle management and surveillance at the exercise, the author witnessed two B-52s—callsigns Havok 11 and 12—working with an RAAF IAI Heron unmanned aircraft on the radar scope spotting targets over the exercise airspace. 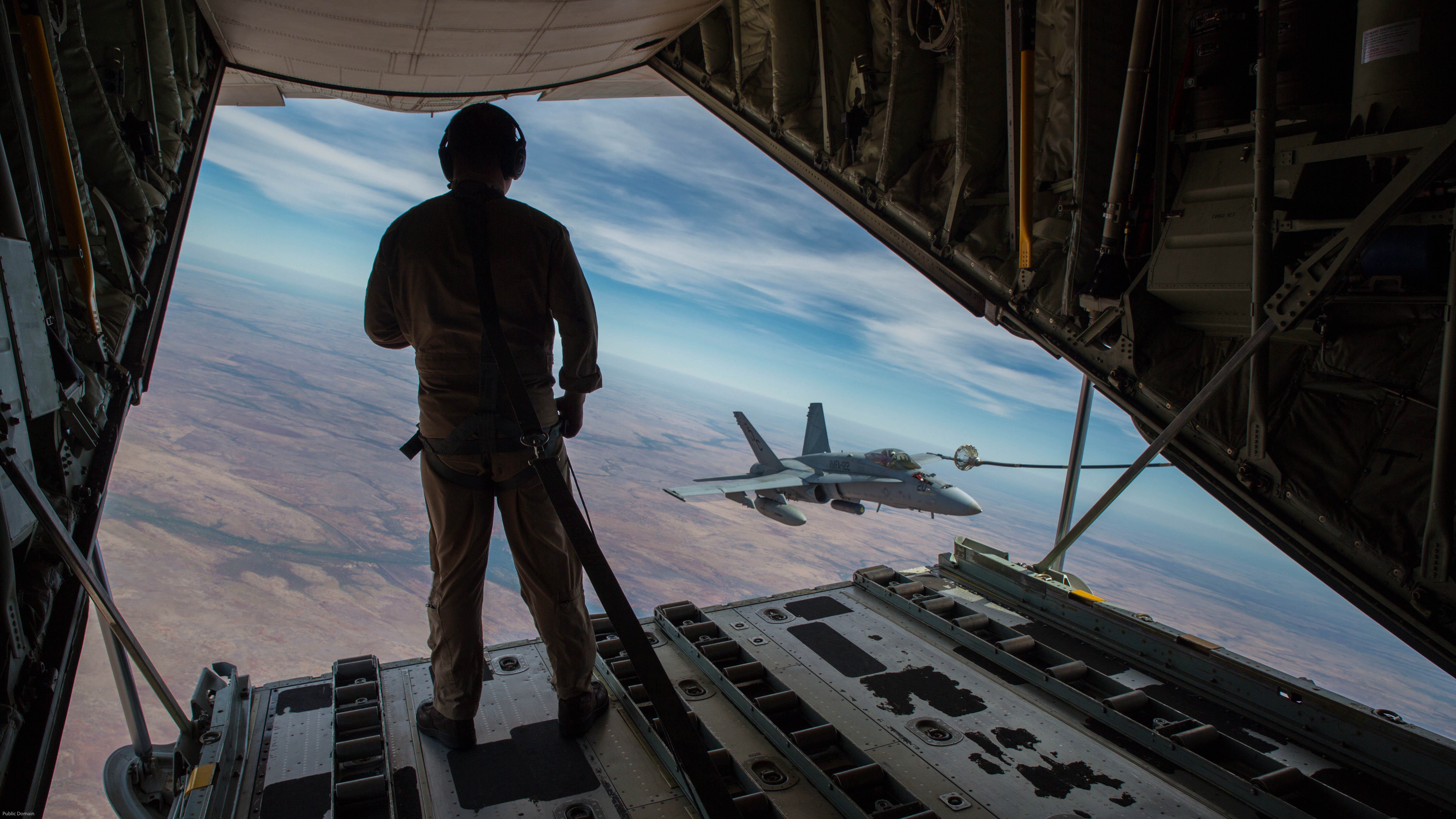 Meanwhile, Marine TACAIR assets at the exercise took the form of ten F/A-18C Hornets from the Werewolves of Marine Fighter Attack Squadron (VMFA) 122. Normally based out of Beaufort, South Carolina, the squadron has just completed a four-month unit deployment program (UDP) assignment with Marine Air Group 12 at MCAS Iwakuni, Japan, before heading Down Under.

Based out of RAAF Base Tindal in Australia’s Northern Territory, VMFA-122’s Hornets took part in Pitch Black’s large-force offensive counter-air and defensive counter-air support operations throughout the exercise, with VMFA-122 commander LTCOL Derek Brannon calling the exercise a culminating event for his squadron, with lasting effects on its combat readiness.

VMFA-122 pilot MAJ Luke Borgan also hailed the conditions over the Northern Territory, calling it a dream place to fly, declaring that the “weather this time of year and the range space is unbeatable.”

Supporting the Werewolves Down Under were Marines of Marine Wing Support Squadron 171, Marine Aviation Logistics Squadron 12, Marine Aerial Refueler Transport Squadron (VMGR) 152 and other Marine Corps elements. The Sumos of VMGR-152 participated in Pitch Black with two KC-130Js, whose main tasking was tanking the Hornets of both VMFA-122 and the RAAF.

The RAAF regards Exercise Pitch Black as the premier air-combat exercise conducted on Australian soil, and with a steadily increasing level of complexity and realism over its past iterations. With the regular UDP deployment of Marine Corps Lockheed-Martin F-35 Lightning II Joint Strike Fighters to the region starting in 2017 and the annual dry season rotational deployment of Marines to the Top End due to increase to a 2,500-strong Marine Air-Ground Task Force in 2020, it is very likely that the tempo of U.S. participation at future Pitch Blacks will continue to increase.