WASHINGTON, D.C. — Striking the balance between a tanker and a surveillance aircraft is an area of concern for Navy aviation planners and industry as they craft what will be the service’s first operational, carrier unmanned aerial vehicle, commander of Naval Air Forces said on Thursday.
Once tasked with being primarily an information, surveillance and reconnaissance aircraft native to the carrier strike group, the Navy’s first push into unmanned fixed wing aviation – MQ-25A Stingray — will now fulfill a badly needed tanker role for the air wing in addition to the ISR mission, said Vice Adm. Mike Shoemaker during a presentation at the Center for Strategic and International Studies and co-hosted by the U.S. Naval Institute.

The Navy has recently collected the results from a draft request for proposal for the Stingray program and is currently mulling the results from competitors Boeing, General Atomics, Lockheed Martin and Northrop Grumman. Based on the responses, the Navy is refining the requirements for the full RfP expected next year. Affordability will be a key requirement to the program, USNI News understands.

The problem that industry and the service are dealing with is the ISR and the tanking mission inherently requires two very different types of aircraft shapes or planforms, Shoemaker said.

A primarily ISR UAV would be a high-endurance platform “probably not carry a lot of fuel, have a large wingspan,” to be an efficient platform, Shoemaker said.

For example, the highflying Northrop Grumman MQ-4C Triton UAV is built with a 131 foot wingspan and can fly unrefueled for up to 30 hours.

“If you’re going to be a tanker at range, you’re obliviously going to have to be able to carry a fair amount of fuel internal to the platform. That drives the different design for those two,” he said.
”So the industry is working on an analysis of where that sweet spot is to do both of those missions.”

Without mentioning specific companies, Shoemaker said there were some existing planforms that could serve as a baseline for the MQ-25A design.

“There are some shapes that they have designed already that help in that survivability piece of it. There’s a way to capitalize on existing designs in what we come to in terms of what we call a compromise solution but whatever MQ-25 ends up being but we’ve not said survivability is a priority this time around,” he said.
“But I think there’s ways to take advantage of some the other shapes already out there.”

The dividing line between the competitors will almost certainly be between a traditional wing-body-tail design and tailless variations of a delta wing planform.

In the lead up to the last bid for the carrier UAV – the Unmanned Carrier Launched Surveillance and Strike (UCLASS) program – designs from General Atomics and Boeing featured a wing-body-tail design while Lockheed and Northrop Grumman focused on tailless designs. 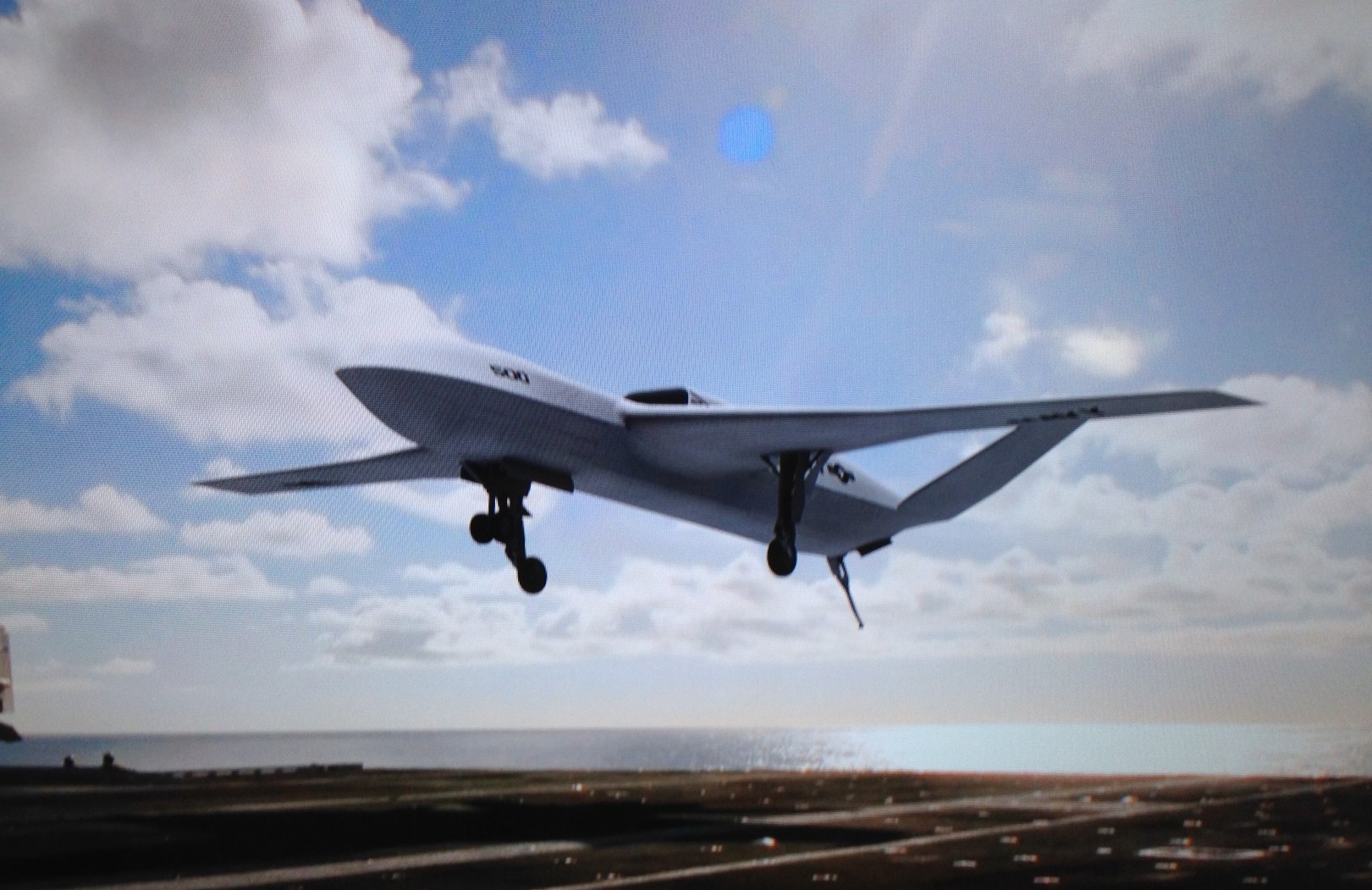 An artist’s concept of the General Atomics Sea Avenger taken from a display monitor. The design shows a wing-body-tail configuration US Naval Institute Photo

Rob Weiss, the head of Lockheed’s Skunk Works program, told USNI News earlier this year that a company could build a low-cost flying wing design for the MQ-25A program.

“We believe [that a flying wing] will be just as affordable as a wing-body-tail configuration. But a wing-body-tail will not be able [to meet] the requirements for penetrating strike in the future,” he said.
“You can take the flying wing and not put on all the coatings and other capabilities in that initial version and be competitive on the cost but have a growth path forward… that same path to use that vehicle design to operate in a [contested] environment.”

Northrop Grumman was thought to have submitted a variation of its cranked-kite design it used for the Navy’s X-47B Unmanned Combat Air System Carrier Demonstration (UCAS-D) that proved a UAV could be launched and recovered from a carrier.

The least is known publically about Boeing’s plan for MQ-25A. The company only exhibited a single piece of promotional material of a wing-body-tail design for UCLASS.

Regardless of the final composition of the Stingray airframe, the introduction of a new tanker to the carrier air wing will be a welcome relief to the service. Anywhere from 20 to 30 percent of Boeing F/A-18 E/F Super Hornet sorties are for mission tanking and are placing unexpected stress on the airframes that have been in high demand in the last several years.

In addition to the planform discussions, the service is mulling how to integrate the MQ-25A into the air wing. Under consideration is pairing the Stingray with the sailors and aviators in the Northrop Grumman E-2 Hawkeye and C-2A Greyhound community. The relationship would be similar to the way the Sikorsky MH-60 community will be paired with the unmanned Northrop Grumman MQ-8 Fire Scout and the Boeing P-8A Poseidon operators will be paired with the MQ-4C Triton.