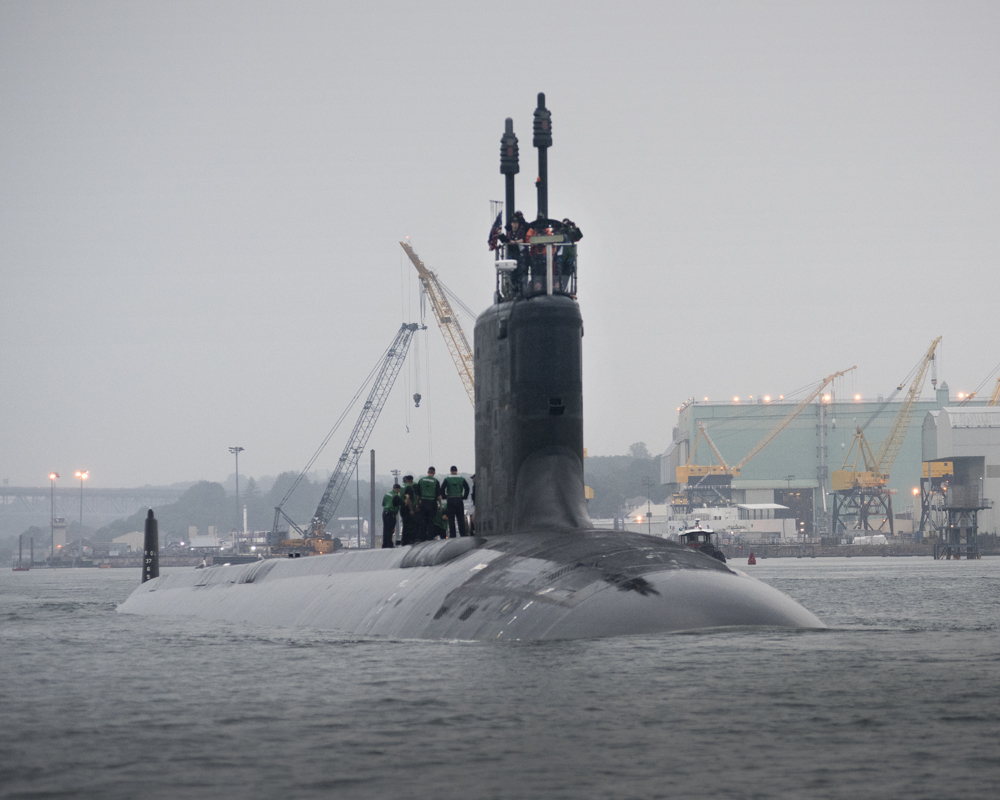 The $2.5 billion Illinois (SSN-786) is the 13th ship in the Virginia-class and the third in the Block III configuration of the attack submarine.

The submarine’s “alpha sea trials included a range of submarine and propulsion-plant operations, submerging for the first time and high-speed runs on and below the surface to demonstrate that the ship’s propulsion plant is fully mission-capable,” read the statement from EB.
“The sea trials were directed by U.S. Navy Adm. James F. Caldwell Jr., director – Naval Nuclear Propulsion. Also participating in the sea trials were Capt. Jeffrey Heydon, supervisor of shipbuilding in Groton, and Jeffrey S. Geiger, president of Electric Boat.”

The 7,800-ton Virginia-class is arguably the Navy’s most successful shipbuilding program with ship deliveries coming in ahead of schedule. The Block III configuration of the ship was redesigned to accommodate a new water-backed Large Aperture Bow (LAB) sonar array and the addition of two Multiple All Up Round Canisters that can each hold six Tomahawk Land Attack Missiles (TLAM).

Illinois is set to commission in October.

GROTON, Conn. – The nation’s newest and most advanced nuclear-powered attack submarine, Illinois (SSN-786), returned to the General Dynamics Electric Boat shipyard Sunday following the successful completion of alpha sea trials, its first voyage in open seas. Illinois is the 13th ship of the Virginia Class, the most capable class of attack submarines ever built. Electric Boat is a wholly owned subsidiary of General Dynamics (NYSE: GD).

Illinois’ alpha sea trials included a range of submarine and propulsion-plant operations, submerging for the first time and high-speed runs on and below the surface to demonstrate that the ship’s propulsion plant is fully mission-capable.

“The crew and shipbuilders worked together seamlessly to take this submarine to sea and put it through its paces,” said Geiger. “It was a superb effort by everyone involved, and reflects the commitment of the Navy and industry team to sustain the success of the Virginia-class submarine program. I deeply appreciate the contributions made by the Navy personnel, shipbuilders and suppliers who made it happen.”

Virginia-class submarines displace 7,835 tons, with a hull length of 377 feet and a diameter of 34 feet. They are capable of speeds in excess of 25 knots and can dive to a depth greater than 800 feet, while carrying Mark 48 advanced capability torpedoes and Tomahawk land-attack missiles.

General Dynamics Electric Boat has established standards of excellence in the design, construction and lifecycle support of U.S. Navy submarines. In its position as an industry leader, Electric Boat remains committed to advancing its technical strengths, while providing the business expertise to effectively manage the challenges of nuclear-submarine production. The company’s three primary locations are in Groton and New London, Conn.; and Quonset Point, R.I. Its current workforce is approximately 14,500 employees. For more information about Electric Boat, please visit www.gdeb.com.