Starting in early 2016, Scarborough Shoal suddenly became an issue of serious concern for U.S. officials. According to articles in the press reports information was obtained that strongly suggested that China was about to start turning Scarborough into another artificial island, similar to what they had done in the Spratlys. Apparently, one of the factors that suggested Beijing was about to act was a posting found on a Chinese website that included satellite photographs based on a construction bid proposal that would turn Scarborough into an island base similar to what China has constructed on seven Spratlys Islands.

A modern Scarborough airfield with radar and other modern information, surveillance and reconnaissance (ISR) facilities so close to Philippine bases where U.S. has been granted rotational access by the Philippine government possess obvious strategic issues. As shown in the graphic below from the office of U.S. Sen. Dan Sullivan (R-Alaska), turning Scarborough into a base with air search radars would allow China to have full-time radar coverage over most of Luzon.

Whether this is China’s intent is not known, but Washington reacted as though they thought it was. Whatever information the Department of Defense has it was deemed credible enough to trigger a “full-court” press aimed at dissuading Beijing from taking those steps. Given that Scarborough is ideally located to “control” the northeast exit of the South China Sea and is only 150 nautical miles west of Subic Bay, if it was turned into a PLA base with a jet capable airfield it would enable among other things a credible Chinese South China Sea Air Defense Identification Zone. 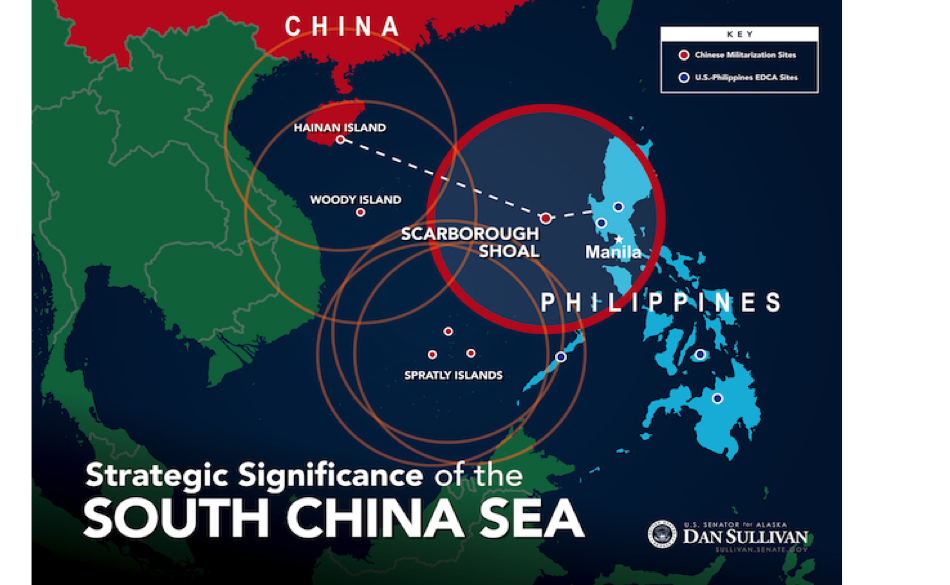 The U.S. response included beginning the rotational deployment of a small task force of US Air Force tactical aircraft to the Philippines, the presence operations of the USS John Stennis Carrier Strike Group in the South China Sea for much of March, April and May of 2016, along with a many high-level public statements, the most dramatic of which came from the Secretary of Defense in testimony before the Senate Armed Services committee. Carter was quoted as saying that Scarborough is “a piece of disputed territory that, like other disputes in that region, has the potential to lead to military conflict…That’s particularly concerning to us, given its proximity to the Philippines.” According to New York Times reports, President Obama also mentioned Scarborough Shoal to President Xi Jinping during their meeting on March 31st on the margins of the Nuclear Security Summit:

The stakes are so high that Mr. Obama warned the Chinese leader, Xi Jinping, during their recent meeting in Washington not to move on the Scarborough Shoal or invoke an air defense zone, said an American official who was briefed on the details of the encounter and spoke anonymously because of the diplomatic sensitivities.

In essence, the flurry of activity regarding Scarborough in March, April and May of 2016 was meant to send a clear signal to China that the United States sees Scarborough as being different from the Paracels and Spratlys. Although official U.S. policy of taking no position on the merits of disputed sovereignty claims to features in the South China Sea includes Scarborough Shoal, recent US action suggests that it does in fact have a different unofficial view. Since Scarborough is not in either the Spratly or Paracel chains and is not also claimed by any littoral state other than China and Taiwan, and for almost 50 years was treated as though it was under US jurisdiction, changing the US position on sovereignty over Scarborough would not be a stretch. It is the author’s view that the evidence supports Philippine sovereignty over the Shoal. To this point:

When comparing the Chinese and Philippine cases, evidence of effective occupation is not overwhelming in either case – but, of the two, the Philippines’ case is stronger. Most mariners charted this feature only in order to remain well clear of it since it was a hazard to navigation. Similarly, the presence of itinerant fishermen from either China or the Philippines is legally insufficient to establish a legal presence.

But, past activities by the U.S. Navy and Philippine authorities to survey the Shoal so that it could be safe for shipping, constitute some positive occupation, along with its contemporaneous appearance on Philippine charts. Past actions by the Philippine armed forces to exercise law enforcement jurisdiction in the 1960s, both to eject smugglers and to monitor future movement, show intent to exercise jurisdiction over the atoll.

In short, it would not be legally difficult for the U.S. government to persuade itself that the Government of the Philippines does have a superior claim to sovereignty over Scarborough Shoal. The obvious political and security implication of such a judgment would be the US-Philippine Mutual Defense Treaty could be interpreted to cover Scarborough Shoal; an act that hopefully would deter Chinese island building. It is probably not the best time to actually do this while Beijing is still reeling from the Hague arbitral panel findings, and before we learn if Philippine President Duterte is trying to reach a deal with Beijing over access to Scarborough.

But, this is a card that Washington should keep close at hand while waiting to see how things play out. Unless the almost three months of recent US naval and air posturing around Scarborough was simply a bluff, it suggests that Washington has already decided that Scarborough is important enough to the security of the Philippines (and to the United States position in the Philippines) to accept the risks associated with doing something that will really irritate Beijing.