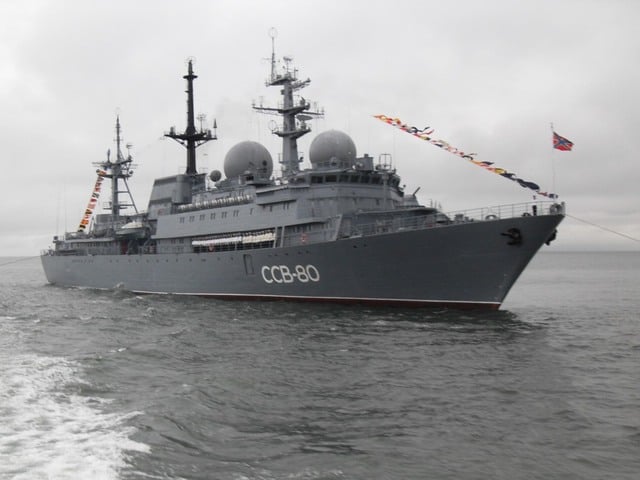 Undated photo of Russian spy ship Pribaltika (SSV-80). Sources confirmed the ship is operating off the coast of Hawaii.

Moscow has dispatched a specialized spy ship off the coast of Hawaii with the likely mission to monitor the U.S. Navy led Rim of the Pacific 2016 exercise, USNI News has learned.

A Russian Navy Bal’zam-class, “auxiliary general intelligence ship recently arrived in international waters off Hawaii where exercise Rim of the Pacific is taking place,” U.S. Pacific Fleet spokesman Lt. Clint Ramsden told USNI News this week.
“The ship’s presence has not affected the conduct of the exercise and we’ve taken all precautions necessary to protect our critical information.”

While it wasn’t unusual at all in during the Cold War for Russian spy ships to linger off the coast of the U.S. to suck up signals intelligence information or monitor exercises like RIMPAC, the Russians have been lax in their surveillance until recently.

“It used to be that AGIs would deploy regularly off their ports and we would encounter them and they would operate very safely and professionally — mostly looking for signals intelligence,” Bryan Clark, a naval analyst at the Center for Strategic and Budgetary Assessments and former aide to retired Chief of Naval Operations Adm. Jonathan Greenert, told USNI News.

Following the March 2014 seizure of the Crimean region of Ukraine, the Russian Navy has operated more aggressively returning to levels not seen since the Cold War.

Given the participation of 25 countries, almost 50 of ships, more than 200 aircraft and 25,000 personnel operating during the exercise, it would make sense for the Russians to listen in, Clark said.

“It’s unusual now, only because they haven’t done it in a while,” he said.

The service did not provide additional information about the ship or its origin but naval analysts contacted by USNI News surmised the ship is the Project 1826 Bal’zam class ship Pribaltika (SSV-80) operating out of Vladivostok on Russia’s Pacific Coast.

Out of the Russian’s current crop of available ships designed to intercept and record the communications and electronic emissions – like radar signals — of potential adversaries, Pribaltika is the most likely ship the Russians would send to monitor RIMPAC, Chris Carlson, a retired U.S. Navy captain and naval analyst told USNI News on Wednesday.

“Given that Pribaltika is larger, has greater endurance and range, has undergone recent maintenance and has made a deployment to Hawaii in the past (2004), it makes the most sense that this is the ship the Russians [would] send,” Carlson said.

The Russians are developing more modern AGIs but “until more modern units such as the new Yuriy Ivanov-class (Project 18280) intelligence collection ships enter service during the next few years, it makes sense that the Russians would consider sending a vessel from the older Bal’zam-class to monitor U.S. and allied naval exercises,” Eric Wertheim — naval analyst and author of U.S. Naval Institute’s Combat Fleets of the World — told USNI News on Wednesday.

During RIMPAC 2014, the Chinese People’s Liberation Army Navy sent its own uninvited spy ship to monitor the exercise – in addition to four other Chinese ships the U.S. invited to participate in the exercise. The move – considered odd given China was included in almost all levels of the exercise by the U.S. – made international headlines and elicited defensive responses from Beijing.

Several sources told USNI News during this iteration of RIMPAC and there are no signs China has sent its own spy ship in addition to its five invited warships.