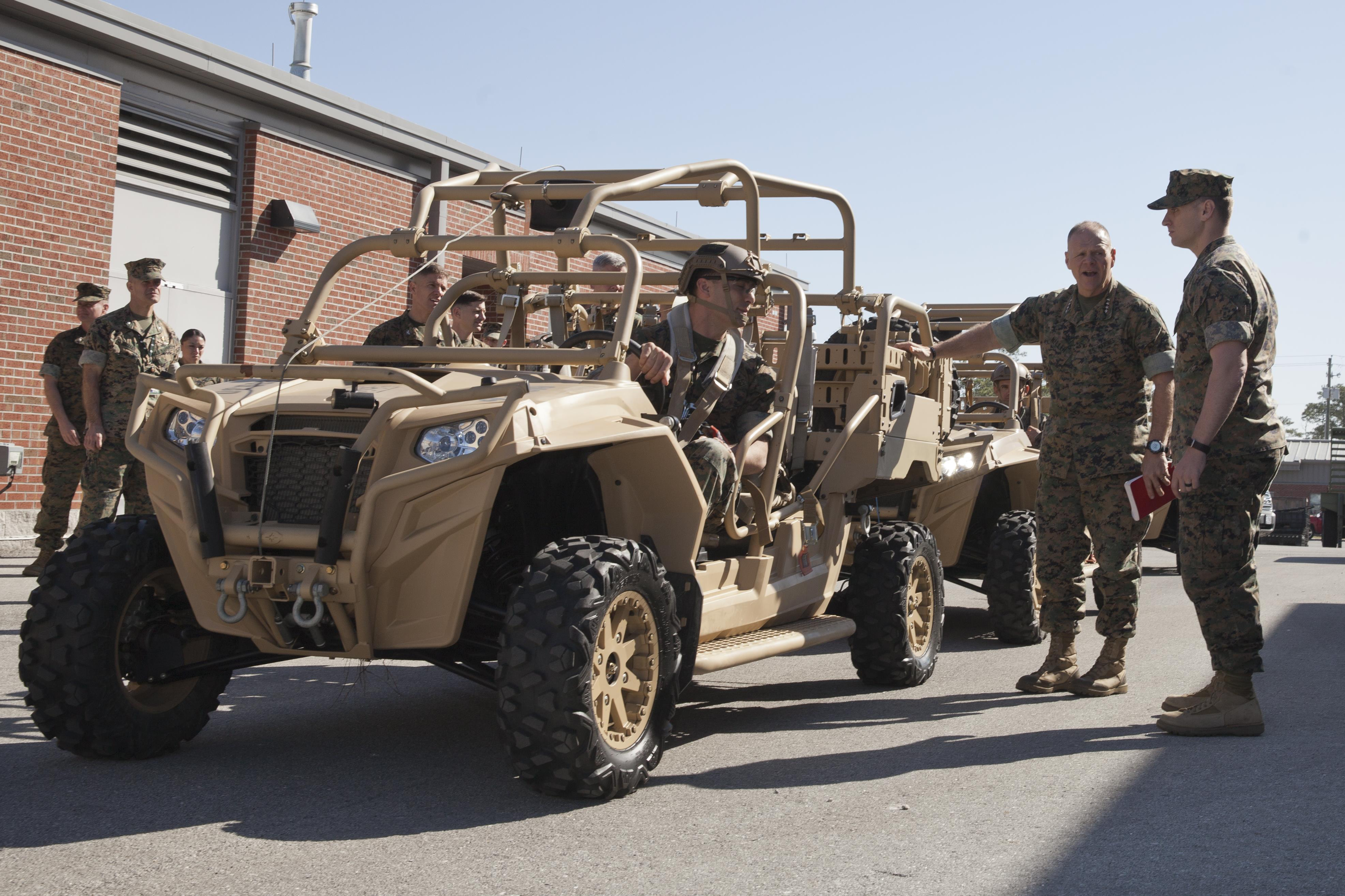 The Marines conducting an extensive series of experiments during the upcoming Rim of the Pacific international maritime exercises will be the first in the Corps to test a new small tactical vehicle intended to provide better mobility for ground units engaged in distributed operations.

The new vehicles are the MRZR, a rugged all-terrain vehicle built by Polaris. The Marines are calling them Utility Tactical Vehicles (UTV). To meet military requirements, Polaris announced in May that it had begun producing a “turbo diesel” version of its gas-burning commercial ATVs.

Polaris said the MRZRs “have redefined ultralight, off-road mobility for military vehicles and are mission-critical for expeditionary forces in the U.S. and more than 20 allied countries to meet mission demands and threats while forward deployed.” They can be sized for two, four or six seats.

The first 15 of the diesel-powered MRZRs will go to the 3rd Battalion 5th Marines, which is the Marine Corps’ designated experimental unit and will provide the ground combat element (GCE) for an enhanced company landing team (CLT) in Marine Corps Warfighting Laboratory-run experiments at RIMPAC this summer, said Col. Jeffrey Holt, director of the experiment division at MCWL.

The Marine Corps believes it will need to conduct widely dispersed expeditionary operations in the face of the growing anti-access, area-denial threat posed by potential adversaries, and the CLT is emerging as the most likely sized unit for that task.

The 220 Marines in the CLT involved in the MCWL experiments will be supported by the command element of the 15th Marine Expeditionary Unit and a “robust” Air Combat Element (ACE) from 3rd Marine Aircraft Wing, Holt said. And although most of the RIMPAC exercises will be in the Hawaii area, the MCWL experiments will be conducted in Southern California, with a simulated amphibious assault by air from Camp Pendleton into the Marine Corps Air Ground Combat Center, Twentynine Palms.

The initial assault and all the resupply and casualty evacuations movements during the experiments will be by air. The UTVs are small enough to fit inside the tilt-rotor MV-22 Ospreys and the CH-53E helicopters, Holt said.

The experiments will test 30 pieces of new technology, including a wide variety of unmanned air and ground vehicles, many of which the Marines have never used.

“Ground robots are interesting, but we need to take some weight off the infantrymen, which is why we’re looking at the new MRZR,” Holt said. “Polaris makes a pretty good jeep-like asset that we believe will further inform the requirements process for an internally transportable vehicle (ITV).”

Holt emphasized that the UTVs are not the Marines’ current ITVs, which are primarily used to haul the towed 120mm mortar and to carry communications systems.

Holt said some of the UTVs will be equipped as command and control vehicles, making them a “mini-network on the move.” One will be rigged as a counter-unmanned aerial vehicle (UAV) weapon.

The Army and the Marine Forces Special Operations Command have been testing the UTVs, and “we’ve taken notice of what they’ve done and we’re incorporating this within infantry maneuver as a totally off-road vehicle.”