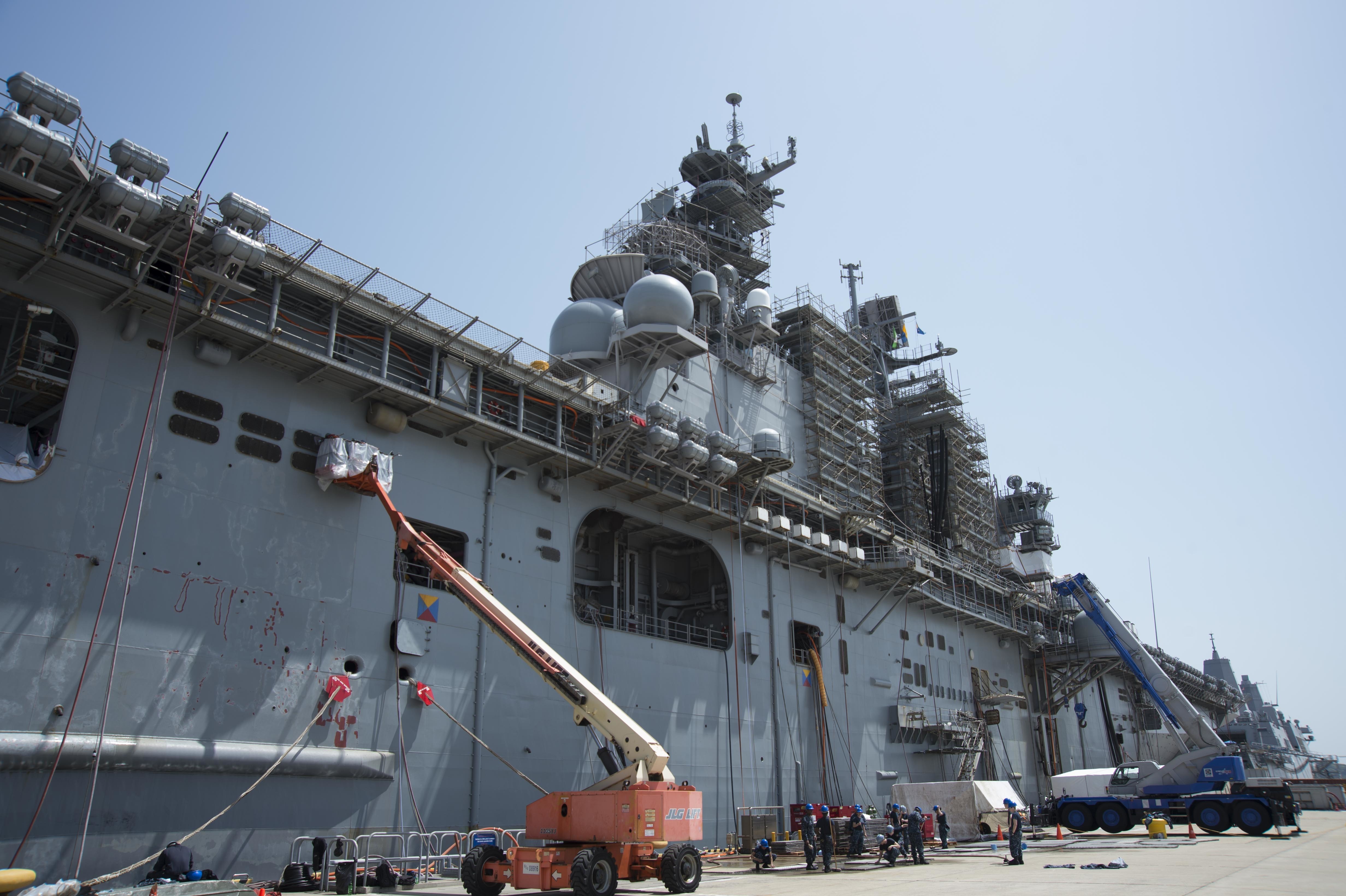 Without enough money to continue at pace through the remainder of the fiscal year, a complex prioritization process began that looked at both lower-priority work that could be pushed back as well as what locations could absorb cuts with the least disruption.

The operations and maintenance shortfall – which totals just two percent of the Navy’s O&M budget but led to some painful cuts – consists of $500 million still needed for ship depot maintenance after work delays and growth in work package scope drove up costs, $255 million for flying hours and $91 million to extend the Truman Carrier Strike Group’s deployment in the Middle East, according to U.S. Fleet Forces Command and House Armed Services Committee documents related to a Navy readiness hearing held today.

“The $848-million shortfall will have no impact to our forces currently deployed, but deferring a number of depot and continuous maintenance availabilities into FY 2017 would likely delay some associated deployments,” Navy spokeswoman Lt. j.g. Kara Yingling told USNI News.
“The overall mitigation actions reduce our ability to respond to crisis, as recovery from our lowest readiness point in many years is slowed. As we move forward, we will closely manage the shortfall over the remaining four and a half months of FY16 and continue to work with the Department of Defense and Congress.”

In some years, a Pentagon-level reprogramming can take money from acquisition programs, or from Army and Air Force budgets, to help make up the funding shortfall. USNI News understands the Navy may not be able to get money from the other services this year to help cover its shortfall.

The Navy began to implement but then rescinded a suspension of work at the Southwest Regional Maintenance Center (SWRMC) in San Diego, which is illustrative of the hard choices the service has to make given the ever-increasing demands on the fleet, the continued congressional budget caps and rising costs of labor.

An early May memo from SWRMC Commanding Officer Capt. Hugh Huck, obtained by USNI News, notes that “due to funding shortfalls in the 1B4B funding accounts, SWRMC will be reducing their contract support levels, intermediate level (I level) repairs, and ability to provide after-hours support (overtime) in specific areas. Although extensive efforts have been expended up to this point in the fiscal year to limit adverse impact to the ships on the San Diego waterfront, fiscal realities have forced SWRMC into this action, starting in this third fiscal quarter and through the fourth quarter of this fiscal year.”

Specifically, the memo called for a stoppage of engineering support to include tank and void inspections, infrared surveys, underway vibration analysis and surface ship availability work certifications. Seven ships would go without needed tank and void and structural inspections, and other engineering work would have been suspended as of May 15.

In June the center would reduce parts and material procurement, and “as funding is expended, repairs to additional systems will be impacted as on hand material is expended. We project that we will not accept any new work after 15 July 2016. Intention is to complete I level jobs inducted prior to 21 June 2016 if parts have been obtained.”

That reduction in parts procurement would mean a stop to all major diesel work, surface ship torpedo tube repairs and refurbishment, air compressor overhauls, communication receiver and transmitter repairs, and repairs to electronic warfare and anti-ship missile decoy systems, according to the memo.

“As funding is expended, repairs to additional systems will be impacted as on hand material is expended. We project that we will not accept any new work after 15 July 2016. Intention is to complete I level jobs inducted prior to 21 June 2016 if parts have been obtained,” the memo reads.

The memo ends with acknowledgements that system command requirements would have to be suspended during this time and that the type commander’s priorities would guide how the SWRMC cuts were carried out, and that though the shortfall was not expected to continue into FY 2017 it would take the first quarter of the new year to reconstitute previous work capacity levels.

By May 17, however, U.S. Pacific Fleet had realigned its funding to fully support SWRMC through the end of the year.

A Navy official told USNI News that the rationale for originally selecting SWRMC to absorb some of the shortfall was that, as the largest of the regional maintenance centers, “the size and capacity of SWRMC make it able to accommodate the funding shortfall.”

“The funding shortfall at Southwest Regional Maintenance Center can be attributed to increasing the size of the government workforce in Fiscal Year 2016 to support higher projected workload in 2017 and later, travel throughout the Pacific to support the deployed fleet, and non-labor overhead costs associated with operating the RMC,” the official explained.
“Some of the funding shortage can also be attributed to the cost of renewing contractor support used to augment SWRMC government workforce. SWRMC released a naval message on 5 May to announce the curtailment of some engineering services typically provided by SWRMC in order to extend higher priority technical support work.”

“SWRMC started the fiscal year with a modest shortfall, but there was a growth in overall requirement due to the assessed condition of our ships and the need to continue the reset in stride,” the official noted.

The Navy has been warning Congress for years that extended deployments since 2001 have led to more severe maintenance problems when ships can finally go into an availability. Insufficient time and funding have led to partial completions of the work in some cases, which then creates bigger problems down the road – for example, tank inspections get skipped and then the Navy has to deal with major corrosion issues later on.

As it stands, the Navy opted to restrict flying hours for Carrier Air Wing 1, which will not deploy until 2019 – potentially stopping all flying for up to four months, U.S. Fleet Forces Command commander Adm. Phil Davidson said at the readiness hearing today. Four surface ship and one submarine maintenance availabilities will be pushed from the fourth quarter of FY 2016 into FY 2017, and smaller continuous maintenance for the Makin Island Amphibious Ready Group, the America ARG, and the Vinson CSG – a dozen ships across the three groups – will be deferred into FY 2017 as well.

“Delaying these maintenance periods, pressing them into the next fiscal year, FY 17, the budget currently under consideration, is not optimal, but it effects the smallest number of ships,” Davidson said, explaining the final decision on how to deal with the operations and maintenance shortfall.
“I will not embark on a path that partially accomplishes all availabilities across the entire fleet. That is a dangerous practice that rapidly builds maintenance and capability backlogs that are difficult to recover. Indeed, we are digging out from that sort of policy more than a decade ago.”

Davidson said that the risk the Navy takes on when it has less than full operations and maintenance funding “means accepting less readiness across the whole of the Navy, less capacity to surge in crisis and in wartime, or perhaps living with reduced readiness in our ships and submarines that would keep them from reaching the end of their service lives. In any case, recovering from these situations will cost us more in time and money in the future.”