The first Flight III Arleigh Burke guided missile destroyer will be built at General Dynamics Bath Iron Works, according to a Sunday statement from the Navy to USNI News.

Last week, the Navy issued a pre-solicitation notice on FedBizOpps stating the service intended to issue a Request for Proposal to Bath Iron Works for a Burke DDG “and associated supplies and services which are anticipated to be delivered in the Flight III configuration,” read the notice.

The ship will feature the first operational installation of the Raytheon AN/SPY-6 Air and Missile Defense Radar (AMDR) – an active electronically scanned array (AESA) radar that promises to be 30 times more powerful than the AN/SPY-1 air search radar on the current Flight IIA Burkes.

The first Flight III will be the third DDG funded in 2016 following $1 billion Congress set aside for the third hull in last year’s defense bill. The service had intended to build two destroyers in 2016 but the additional funds Congress included prompted the Navy to ask for an additional $433 million in its Fiscal Year 2017 unfunded requirements list to complete the third 2016 hull.

“We’re budgeted for two Flight IIAs plus one Flight III mod. We awarded two Flight IIAs and we still have the balance of funding for the Flight III mod. And now we’re waiting to get this additional FY 16 ship in hand in a timely manner to award the ECP for this [third] ship,” Sean Stackley, assistant secretary of the Navy for research, development and acquisition told USNI News following an April 7 hearing before the Senate armed services seapower committee.
“If we can’t get this ship in a timely manner then we’ll have to modify one of the two that are already under contract.”

Prior to the pre-solicitation, both Bath and Huntington Ingalls Industries (HII) had been working on the detailed design work for the Flight III. The configuration will be built by both shipbuilders. 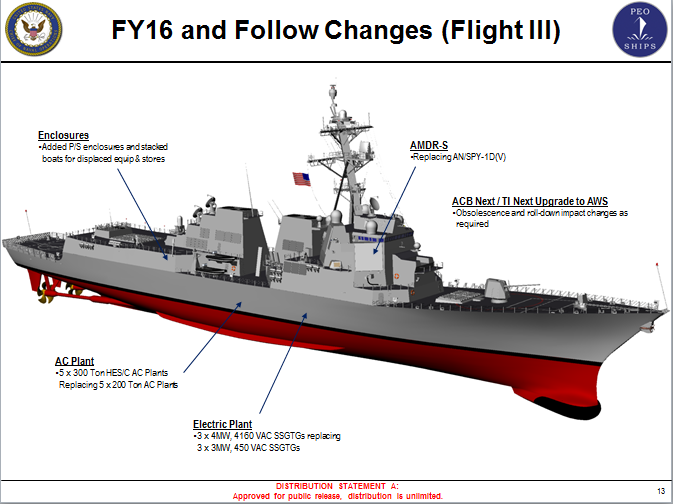 The electrical grid on the ship will also be upgraded from the 450-volt configuration to a 4,160-volt grid which will lead to additional design changes.

Bath getting the extra Fiscal Year 2016 ship was part of a so-called “swap agreement” between HII and Bath, the Navy said.

“The Navy intends to award the third FY16 DDG 51 ship to Bath Iron Works. This corresponds to the December 2015 long lead time material contract award for LPD 28 to Huntington Ingalls and would be in addition to the currently contracted multiyear ships, subject to congressional authorization and appropriation,” read the Navy statement.

In a Saturday statement Maine Senators Angus King and Susan Collins said, “there is no workforce in the world better positioned to build the first of the Navy’s upgraded destroyers, which will help ensure that the strength of our Navy’s capabilities remain unrivaled.”

The following is the complete Sunday Navy statement on the Flight III program.

In support of the Navy’s plans to introduce Flight III capability in 2016, the Navy issued a pre-solicitation notice for a third DDG 51 ship in FY16, which the Navy intends to deliver in the Flight III configuration. Congress has appropriated approximately $1B towards this additional ship and provided incremental funding authority, thus allowing the Navy to start the process to award the third FY16 ship in advance of receipt of the balance of funds required ($433M identified in the Unfunded Priorities List).

As previously stated, consistent with the “swap agreement,” the Navy intends to award the third FY16 DDG 51 ship to Bath Iron Works. This corresponds to the December 2015 long lead time material contract award for LPD 28 to Huntington Ingalls and would be in addition to the currently contracted multiyear ships, subject to congressional authorization and appropriation.