Investigators with the Navy have submitted their preliminary report and recommendation for prosecution on accusations that a U.S. Navy officer passed secrets to China and Taiwan, service officials told USNI News on Wednesday.

The report will recommend to U.S. Fleet Forces commander Adm. Phil Davidson whether or not to begin court martial proceedings Lt. Cmdr. Edward Chieh-Liang Lin, 39, for alleged acts of espionage and other charges.

Now the recommendation from the investigating officer has been submitted, Davidson will make the ultimate decision – based on the report’s findings – on how to proceed with the case.

The ultimate recommendation from the investigating officer was not provided to USNI News, but several lawyers with experience in national security cases have said that the likelihood Davidson would elect to forgo a court martial for another method of non-judicial punishment under the Uniform Code of Military Justice is slim.

“The government will have to weigh the punishment, retribution and deterrence value of full litigation for a lengthy sentence against the damage that will result — and the cost and difficulty — of fighting over classified disclosure,” Rob “Butch” Bracknell, a former Marine and military lawyer, told USNI News.

Two messages left with Lin’s lawyers by USNI News seeking comment have not been returned.

Members of the military charged with espionage, if convicted, can face the death penalty but the military has not executed a service member for decades. 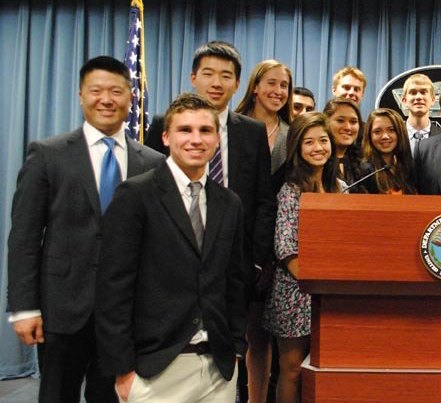 Lin, far left, in the Pentagon during his tour as liaison to Congress

If Davidson elects to try Lin, the naval flight officer faces charges that allege he committed two instances of espionage, three instances of attempted espionage, unauthorized transportation of classified information, visiting a foreign country without permission, lying about the trip and allegations of adultery and paying for prostitutes, according to a heavily redacted charge list from Lin’s Article 32 hearing on April 8.

While few details on the allegations are known, Lin did serve in positions in the service where he would have been privy to some of the Navy’s most closely guarded secrets.

Before he was detained by authorities in Hawaii in September, Lin had served has a department head in Special Projects Patrol Squadron Two ‘Wizards’ (VPU-2) that flew highly secretive and specialized signals and electronics intelligence aircraft.

His role on the aircraft – heavily modified versions of the Navy’s P-3C Orion and P-8A Poseidon maritime surveillance planes – was to direct the gathering of signals and electronic emissions from adversaries radars and radio transmissions and analyze in-flight or route them for further study. Lin, originally from Taiwan before moving to the U.S., was fluent in Mandarin.

Additionally, Lin served as a legislative liaison for the Department of the Navy and would have knowledge of the Navy’s ongoing and proposed so-called black programs that exist in a secret funding line in yearly budgets.

In December, three months into Lin’s pre-trial incarceration at the Naval Consolidated Brig in Chesapeake, Va., Department of Navy leadership received an alert of a potential national security incident based on findings from the investigation.