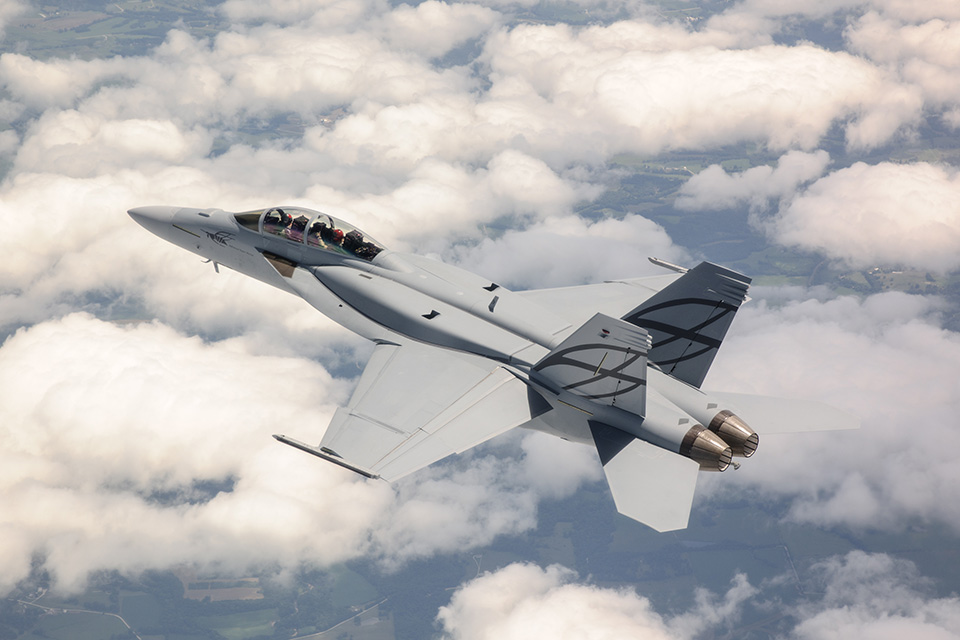 Because the Marines fly only the legacy Hornet, the service’s situation is much more dire than the Navy’s more balanced inventory of older F/A-18 A-D Hornets and F/A-18E-F Super Hornets. Deputy Commandant of the Marine Corps for Aviation Lt. Gen. Jon Davis told the Senate Armed Services seapower subcommittee last week that, according to his records from the previous day, the Marines had only 87 Hornets that were mission capable, out of the 276 planes the Marine Corps owns and the requirement for 174 at any given time.

The Marine Corps will eventually transition its F-18 squadrons into F-35B Joint Strike Fighter squadrons, but in the mean time it is scavenging old planes for parts and using 3D printers to build what it cannot find lying around – trying to keep its planes flying until more come out of the depots after their Service Life Extension Program (SLEP) overhaul.

The Navy, on the other hand, will keep its Hornets and then Super Hornets in the carrier air wing until the 2040s, making each of its three levers important to avoiding a repeat of today’s readiness shortfall. 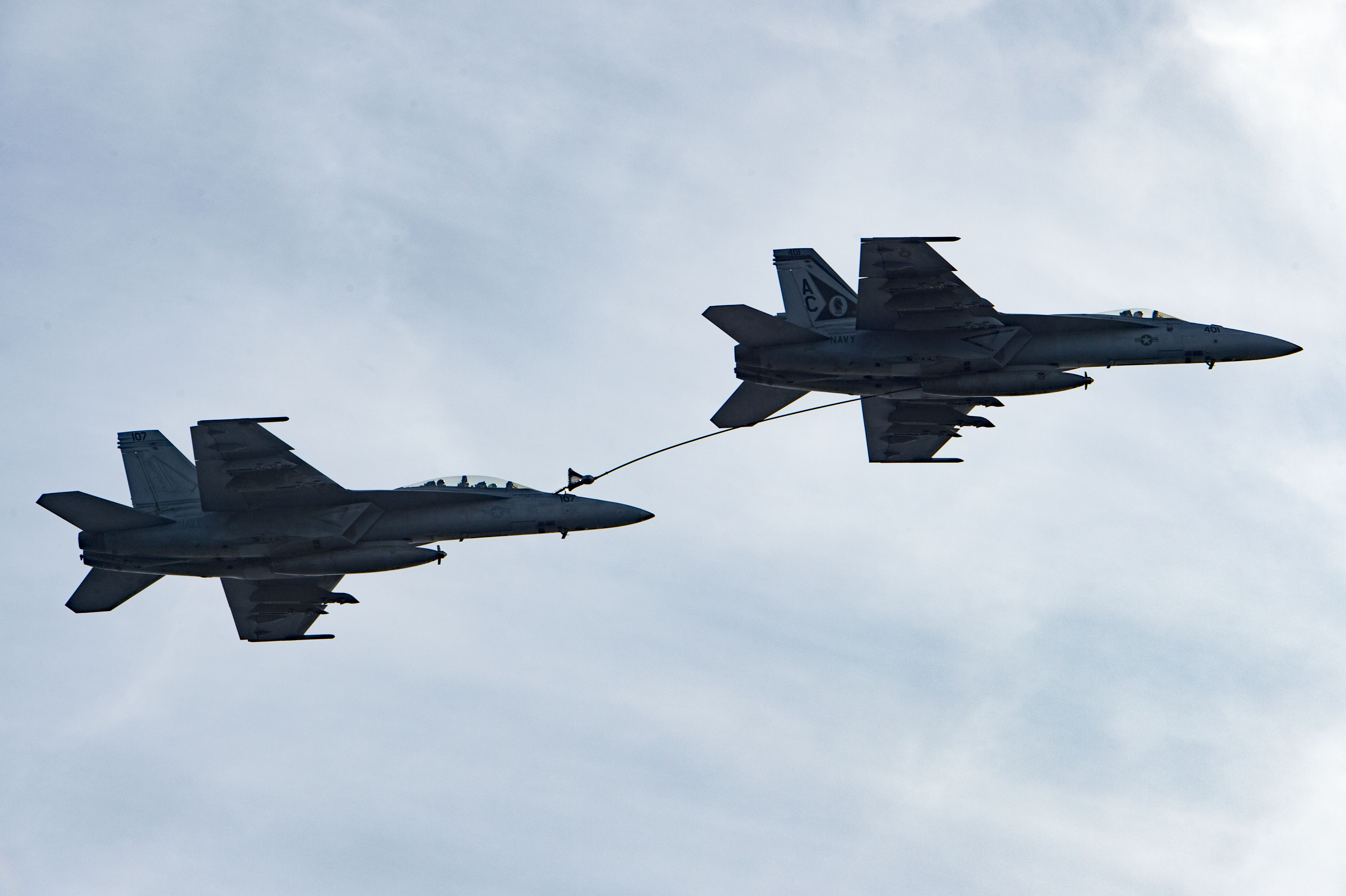 When the Navy and Marine Corps planned to send their Hornets into depots for SLEP work, they couldn’t have imagined that sequestration would come to pass, bringing with it hiring freezes at the depots, reducing operations and maintenance funding, and therefore a backlog of SLEP work. Work at the depots also took longer than anticipated in many cases, with the SLEP kits not containing all the materials needed to cover the full extent of the work the planes ended up requiring.

With Hornets just sitting at the depots, waiting for their SLEP to start, the Navy found itself working its Super Hornet fleet harder, eating up more of the new planes’ service life faster than anticipated. For the Marines, the backlog at the depot just meant fewer planes to train with.

Navy Director of Air Warfare (OPNAV N98) Rear Adm. Mike Manazir said at the Senate Armed Services Committee hearing that the depots are now moving faster to get through the backlog of work – depot output increased 44 percent from Fiscal Year 2014 to 2015, he said. Still, the Navy won’t get through its Hornet SLEP backlog until FY 2018, he said. 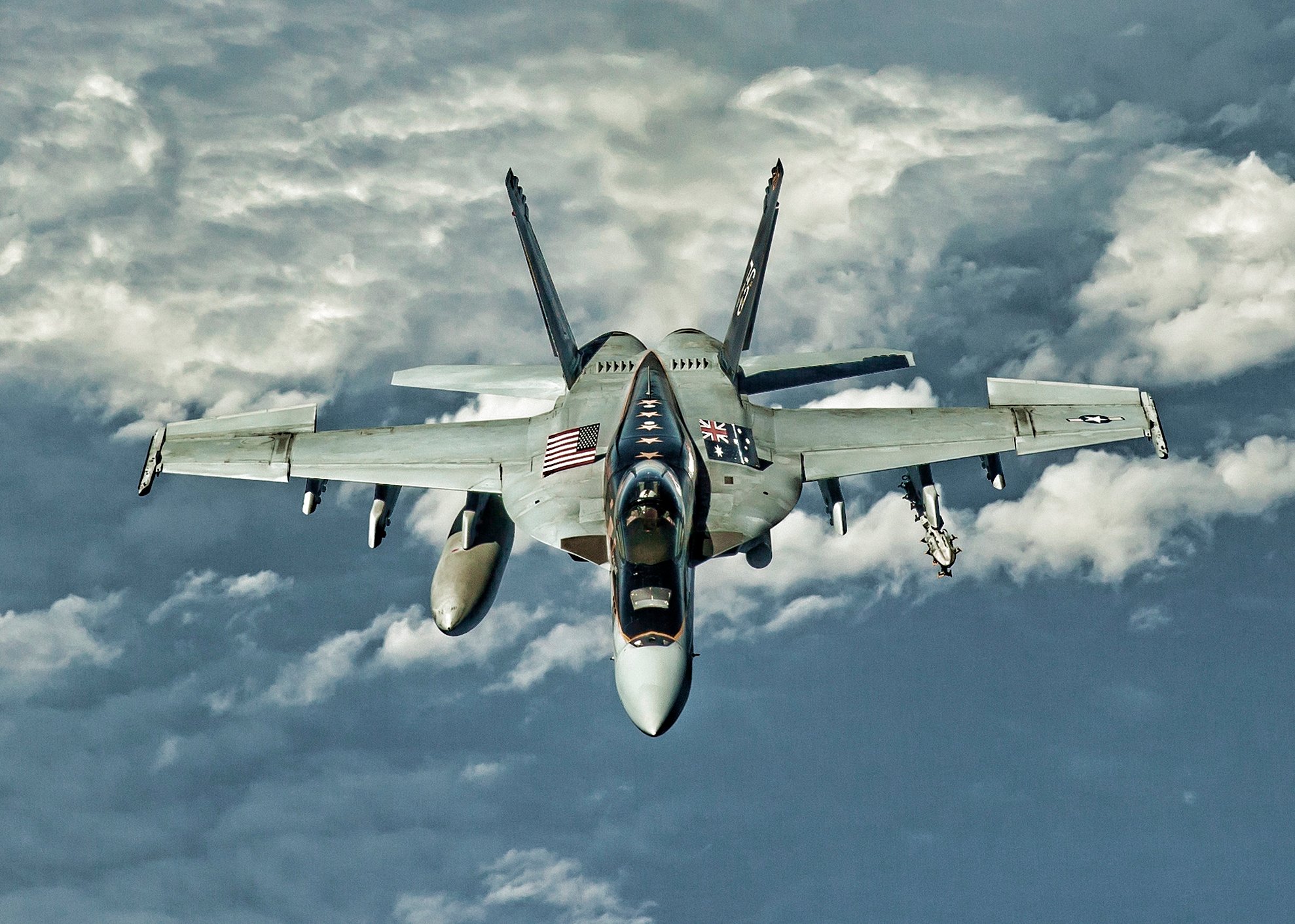 Preparing for the Super Hornets

Because the Super Hornets are flying more to compensate for the Hornet SLEP delays, the first Super Hornet will hit the end of its expected 6,000-hour service life “somewhere in the next year,” Dan Gillian, Boeing F/A-18 and EA-18G programs vice president, told USNI News in an April 21 interview.

Boeing and the Navy are still going through a Service Life Assessment Program to try to get as full an understanding as possible of the work the planes will need, to ensure the SLEP kits are more complete than the ones for the legacy Hornets and to reduce the unknown unknowns that could pop up and slow down work at the depots. 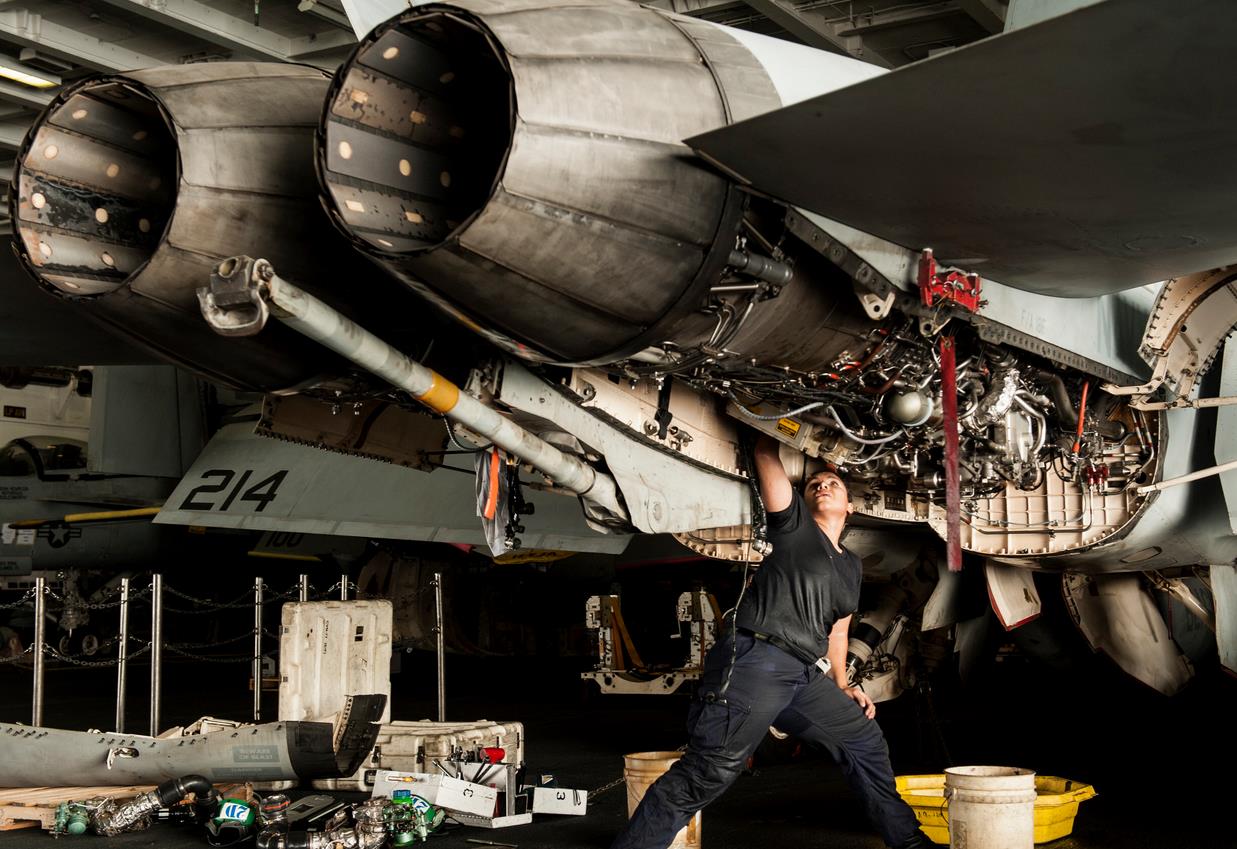 Gillian said Boeing will bring two “learning planes” to its St. Louis headquarters within the next couple months for engineers and mechanics to work on. With those learning planes, which Gillian said would be among the hardest-used planes in the Navy inventory, engineers will look for corrosion and will conduct destructive testing to validate assumptions about structural stress on the airframe – all of which will inform what goes into the SLEP kits, which Boeing is already starting to assemble. In all, Boeing will spend a year to a year and a half with the learning planes, but Gillian said the effort should yield significant time and cost savings later on.

“Those two airplanes will really help us inform the SLEP kits to make them better,” he said.
“One thing we know about SLEP and any service life extension program is there will always be unknowns. Corrosion and life happen, and there will always be unknowns, but we think through these learning airplanes we can get closer to having a total solution at the start, and then deal with those things that are always going to be unknown unknowns in a more manageable way.

“A big problem with the classic Hornets is everything has been open an airplane up, see what’s going on and then fix it and deal with it in real time,” he said. The problem with that approach is the significant lag time between when a problem is identified and when a solution can be identified, materials acquired and then work performed on the plane.

Gillian said this time around, Boeing wants a leaner cycle – the analysis will be validated, the SLEP kits will be more complete, and engineers will be empowered to make decisions on the spot about replacing versus repairing parts when unknown unknowns arise.

Additionally, Gillian said that modern materials and manufacturing processes used on the Super Hornets but not the legacy Hornets should have helped the new fighters age more gracefully than their predecessors – “and we’ve seen that through the analysis and through real-world examples, so we’re starting at a better spot.”

However, the Super Hornet SLEP presents a big challenge compared to the prior Hornet SLEP: volume. The Navy’s full inventory of 568 planes will eventually go through the program, about four times more than were put through the Hornet SLEP, Gillian said. At 50 to 60 planes a year, “sheer volume” might be the biggest challenge the Navy and the supply chain face.

Gillian said the first Super Hornets to go through the depots will likely take about 18 months, but that should come down to a year or less as more planes go through the process and lessons learned are incorporated.

Manazir said at the hearing he is pleased with the preparation efforts, noting “we have confidence that we can limit the shortfall in the [2020s]” thanks to this advance work.

Even with the hastening of the legacy Hornet SLEP and the preparations for an efficient Super Hornet SLEP, the Navy will still face a fighter shortfall of several dozen planes. Today that shortfall is hovering just under 65 planes – the maximum shortfall the Navy deems “manageable,” Manazir said at the hearing – and by the end of the Super Hornet program the shortfall will sit at about 30 to 36 planes, the Navy and Boeing have said.

Manazir said the 65-plane shortfall has been pushed back to 2024 now, thanks to help from Congress in buying more Super Hornets. The Navy bought five Super Hornets in FY 2016, which were not included in the service’s regular budget request but were on the “unfunded requirements list” and were added in by lawmakers. This year, the Navy requested two fighters in its official budget request and put 14 more in its unfunded requirements list. The House Armed Services Committee included funding for all the planes in its version of the annual defense bill, but the full House and the Senate would have to approve that spending.

Gillian said these new planes are an important component to the Navy’s inventory management.

“Certainly the airplanes that are in the discussions for FY 17 or in the budget for FY 18, new airplanes are part of the solution, he said.
“Even SLEPing the whole inventory, 568 airplanes, you still have a defined need as stated by the Navy of 30 to 36 airplanes to address the inventory management. Boeing would say there’s probably a need for additional new airplanes after that. But all of that is needed urgently. Certainly we’re pulling all the levers we can to make SLEP happen on time, and we’re certainly keeping the production line open to buy more airplanes.”

Gillian said that, despite concerns last year about the future of the production line, demand is now strong. This month is the first month of two-plane production, down from three a month previously. However, the 12 planes the Navy bought in FY 2016 will keep the production line busy through mid-2018 at two planes a month. The 16 potential planes in the FY 2017 budget talks would come next, followed by a likely 28-plane buy from Kuwait that would be inserted between 2017 and any 2018 planes for the U.S Navy.

Kuwait has submitted a Letter of Request to receive a Letter of Offer and Acceptance – part of the formal Foreign Military Sales process that shows serious interest. Congressional notification of approval by the State Department is the next step in the process, and once that happens the Letter of Offer and Acceptance would go back to Kuwait to sign before a contract with Boeing could be negotiated, Gillian explained.

Additionally, Denmark is expected to announce the winner of a downselect in its fighter competition this spring, and several other countries are interested in the Super Hornet as well – Canada, Finland, Belgium, Spain and possibly India, he said.

“We’re feeling good about where we’re at, both domestically with a good strong demand signal, and with Kuwait as our next international customer and an important bridge to FY 18,” Gillian said. 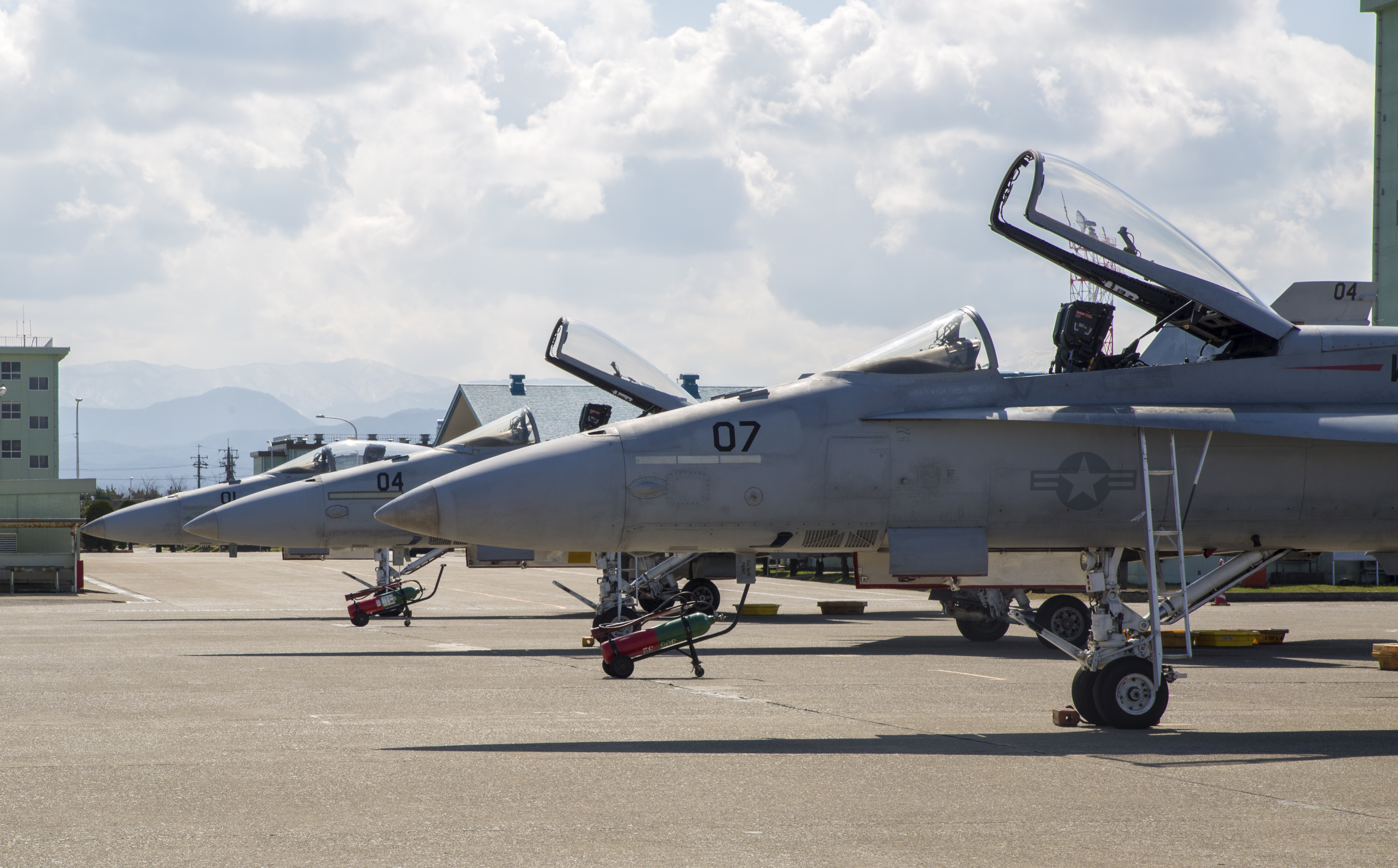 FA-18A++ Hornets with Marine Fighter Attack Squadron(VMFA) 314, forward based at Marine Corps Air Station Iwakuni, Japan, are lined up on the flightline at Komatsu Air Base, Japan, during the Komatsu Aviation Training Relocation exercise March 7-18, 2016. US Marine Corps photo.

The Navy’s situation is looking up, even if the service isn’t out of its readiness hole just yet. But for the Marine Corps, the numbers don’t look good and options to regain aviation readiness are limited.

Davis, the deputy commandant for aviation, said at the hearing that until 18 months ago the Marines had 12 squadrons of F-18s with 12 planes each, plus 30 planes at training schools, for a total of 174. 18 months ago, though, the service shrank its squadrons to just 10 planes each in an effort to share the planes better; the squadrons about to deploy were prioritized, leaving the “bench” squadrons with few aircraft to train on each day.

Despite that change, Davis said he checked his readiness data the day before the hearing and saw that only 87 planes in the whole Marine Corps were mission capable: 30 in the training squad, 40 deployed overseas, and therefore just 17 to be split among all the Marine fighter pilots stationed in South Carolina, California and Japan.

“There’s not a lot left for the units to train with during the day, and that leads to low flight time and short training progression, and more importantly that bench on the schedule to deploy is not as ready as it should be,” he said. In fact, some units have reported only giving their pilots four to six hours of flight time a month. This is problematic now because pilots show up for pre-deployment training not as well practiced as they should be, Davis said. But it will also haunt the service down the road, as these young pilots eventually become senior Marines, potentially without sufficient experience to properly mentor the new generation of pilots.