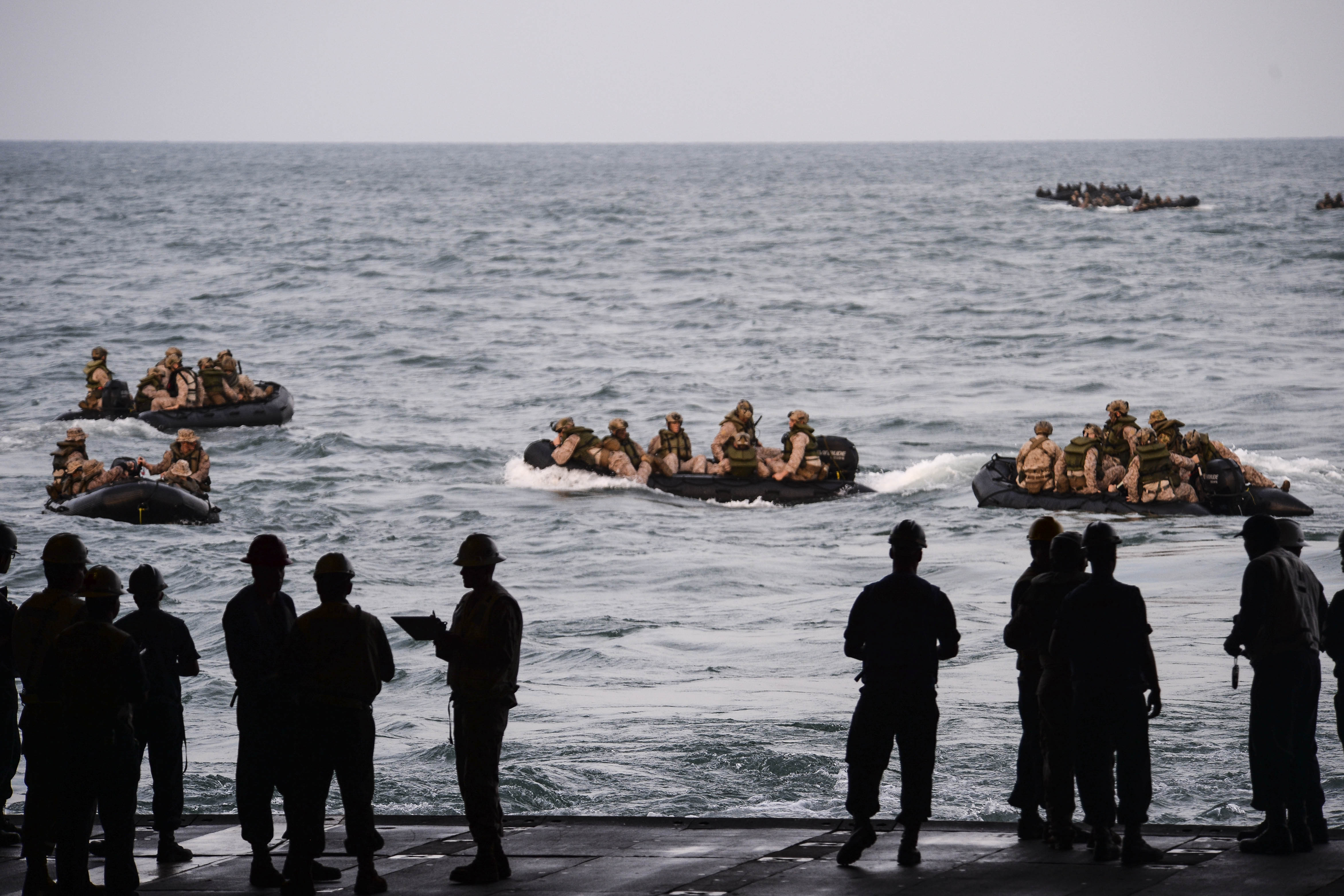 Japan is boosting its amphibious and coastal defense capabilities, shifting security personnel to outer islands and converting ground forces into amphibious units capable of defending those islands from attack.

The Japan Ground Self-Defense Force (JGSDF) is increasing its amphibious capability with an eye on its southwestern-most islands – past Okinawa, all the way to its farthest inhabited island of Yonaguni, which sits closer to mainland China than it does to Okinawa. With only two Japan Air Self-Defense Force radar sites between Okinawa and Yonaguni, the Japanese ground force has taken a renewed interest in protecting these islands, Col. Masashi Yamamoto, military attaché at the Embassy of Japan in Washington, said last week at a Center for Strategic and International Studies event.

Yamamoto said that four weeks ago the JGSDF activated a coast observation unit on Yonaguni for the first time since World War II. He told USNI News after the event that future coastal security units would be set up in the southwestern islands, pulling troops from other parts of the country to focus on about 200 islands as far as 680 miles from mainland Japan.

Additionally, an infantry regiment in the Western Army is being converted to an amphibious regiment – one of two that will create the first amphibious brigade by March 2018. Whereas the infantry regiment is designed to deploy to an island and protect it from foreign invasion, the amphibious regiment would have the capability to move from island to island, landing in contested environments if an enemy – specifically China, though Yamamoto did not single the country out – were to take Japanese territory.

The amphibious force will be housed in the JGSDF rather than the Japan Maritime Self-Defense Force (JMSDF) – whereas the U.S. Marine Corps resides within the Navy instead of the Army – and the two Japanese forces are in the beginning stages of learning how to operate together.

Yamamoto, an armor officer by trade, said the Ministry of Defense will procure 17 MV-22 Ospreys and 52 AAV-7 amphibious assault vehicles, also called amtracks, between fiscal years 2014 and 2018. However, the Japan Maritime Self-Defense Force’s three amphibious dock landing ships (LSDs) are designed for Landing Craft Air Cushion (LCAC) operations. The JMSDF has money in the budget to strengthen the ships’ stern gates and make other modifications to prepare for amtracks instead of LCACs, Yamamoto said.

“We finished the aligning of the amphibious brigade, and we have the budget for the acquisition of amtracks and Ospreys, but that is not enough,” he said.
“We need well-trained and educated Self Defense Force members because amtracks and Ospreys are quite new equipment for us and we need to build this ability from scratch. … However, we have a good friend who is very familiar with amphibious operations. That is the Marine.”

Japanese officers and non-commissioned officers are attending the Marine Corps University and the Expeditionary Warfare School at Marine Corps Base Quantico, Va., he said. Japanese forces also teamed up with Marines at Camp Pendleton in California earlier this year for Iron First 2016, going to sea on an amphibious transport dock and learning to plan ship-to-shore operations. The infantry regiment being converted has experience only with small reconnaissance boats, so the unit’s leaders will need the Marine Corps’ help with everything from mastering AAV operations from the sea to the shore, to planning operations, to coordinating with the JMSDF and international navies.

Yamamoto said at the event that the JGSDF has been trying to participate in both amphibious and non-amphibious exercises in the Pacific recently to help boost interoperability with potential partners beyond just the United States as it grows its amphibious force – and special attention has been paid to Australia, which is also in the process of growing an amphibious capability of its own. 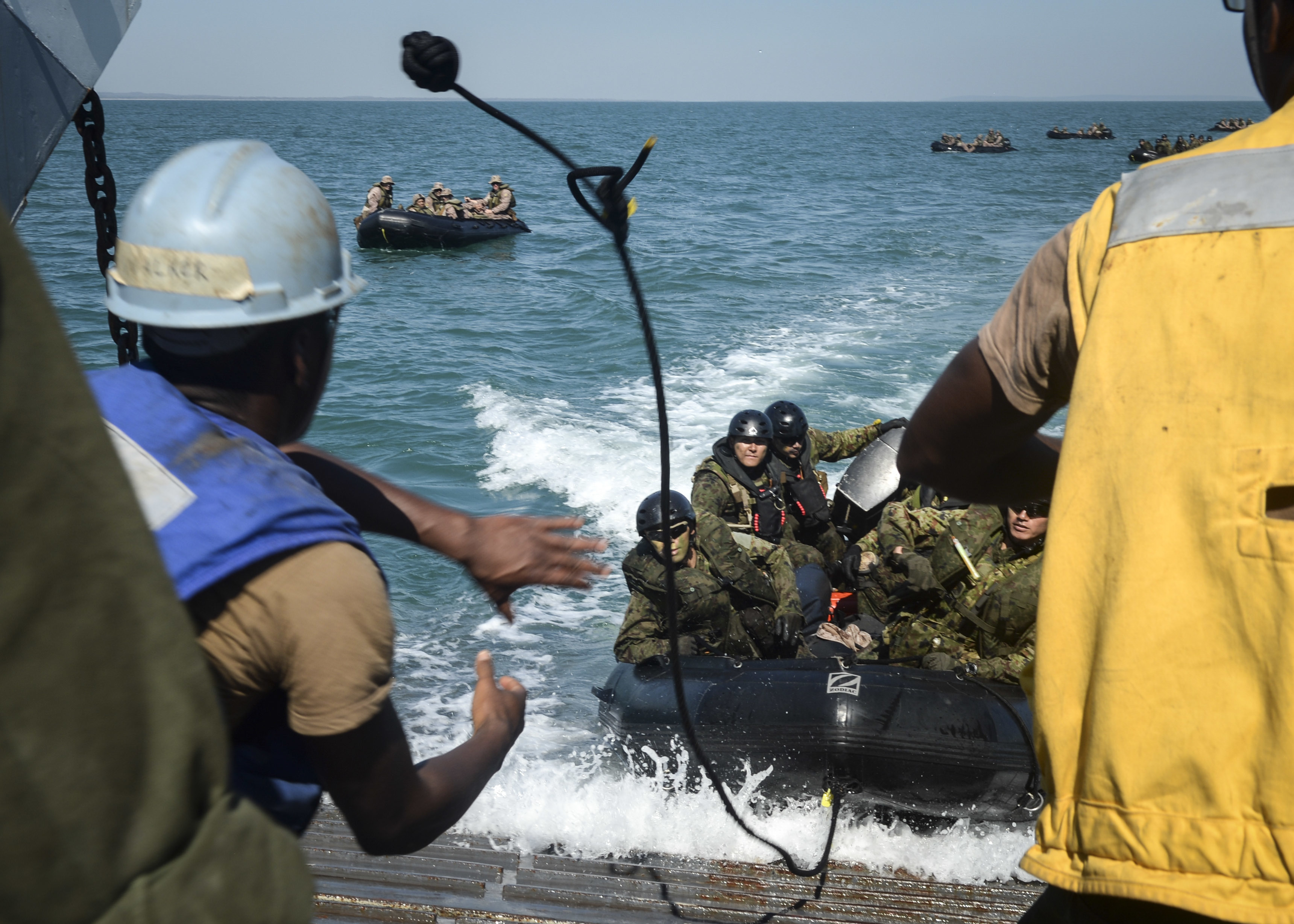 Soldiers from the Japan Ground Self Defense Force recover aboard Landing Craft Utility 1631 after participating in an amphibious assault exercise with Marines from the 31st Marine Expeditionary Unit during Talisman Sabre 2015, an amphibious exercise between the United States and Australia. US Navy photo.

In some ways, the amphibious cooperation between the two counties seems odd – Yamamoto said Japan’s amphibious brigade “of course may be employed for humanitarian assistance and disaster relief,” but its primary mission will be high-end contested landings to protect the Japanese homeland. Australia, on the other hand, has a stated goal of creating “a standing and scalable joint force capable of executing the full spectrum of amphibious operations” – though former Australian National Security Adviser and current CSIS visiting fellow Andrew Shearer said at the same event that the forces would focus on humanitarian assistance and disaster relief and, for now at least, only ramp up to a “landing in what you might call uncertain environments. You’ll note that what’s envisaged doesn’t go to the highest capability, a contested landing.” That capability, he said, may be added in the long-term but would not be a near-term focus.

Still, both Yamamoto and Shearer said the same basic skills and tactics apply throughout the range of amphibious operations, and in that sense the two forces can learn together. If Japan is in the crawl stage, as Yamamoto said, then Shearer said Australia is “crawling too, I think we’re crawling a little more slowly than Japan” – but it is important that they “crawl step by step together so the pathways are parallel” and the two forces can operate together in the future.

The U.S. Marine Corps cannot be everywhere all the time, Shearer said, and the force currently has 30 amphibious ships compared to a stated need of 38. To help make up for the American shipping shortfall, “we should have as an aspiration that U.S. Marines and their equipment, their weapons, their vehicles, their helicopters, can operate seamlessly off of one of Australia’s amphibious platforms,” Shearer said.
“And I think the same in the case of the Japanese, and also that our various enablers can work over time increasingly seamlessly together, so that in effect what we end up with is a highly capable amphibious capacity in the region that can surge and can also backfill to make up, for example, for U.S. capacity where the U.S. is otherwise engaged.

“I know it’s ambitious, I know there are lots of issues … nonetheless, I think we should set the goal high, and if we do that, especially in Australia –Japan-US because they’re the most capable maritime powers in the region, what we can do is create a network rather than the more traditional hub-and-spoke model whereby the three countries can work to raise the capability of other countries in the region,” he continued.