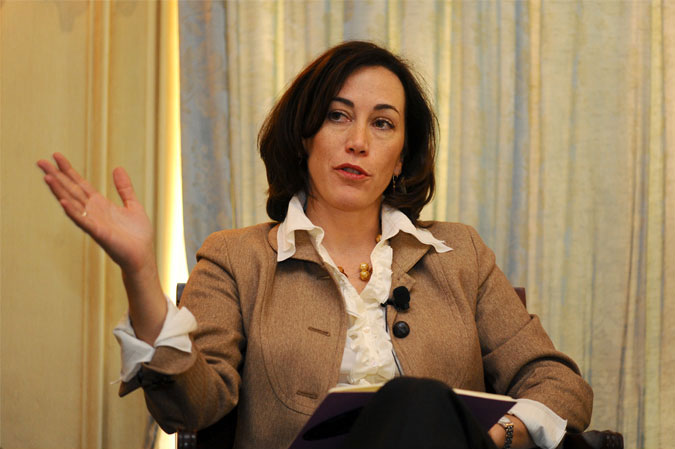 Janine Davidson was sworn in as Under Secretary of the Navy last week, making her the first person to hold that job since early 2013.

Davidson officially took over the job March 22 and will now serve as the Navy’s chief management officer and perform other tasks as assigned by Navy Secretary Ray Mabus.

Davidson began her military career as an Air Force pilot from 1988 to 1998, flying combat support, airdrop and humanitarian air mobility missions in the C-130 and C017 cargo aircraft and becoming the first woman to fly the Air Force’s tactical C-130.

From 2009 to 2012 she served as deputy assistant secretary of defense for plans, where she oversaw the formulation and review of military war plans and global force posture policy, according to a Navy statement. She has also previously served as director for stability operations capabilities in the Office of Special Operations and Low Intensity Conflict, where she was the founding director of the interagency Center for Complex Operations.

Davidson was nominated to serve as Navy under secretary in September 2015, but after a December confirmation hearing before the Senate Armed Services Committee Sen. Ron Wyden (D-Ore.) placed a hold on her nomination – not due to any concerns about Davidson or her ability to perform the job of under secretary, but rather over concerns about how the Navy handles whistleblowers. Wyden lifted the hold March 17 to finally allow a full Senate vote on Davidson’s confirmation.

The Navy has not had a permanent under secretary since Bob Work, now the deputy defense secretary, left the job in March 2013. Robert Martinage was appointed acting under secretary a month later but was pressured to resign in January 2014 after investigators looking into a contracting scheme discovered he was having an affair.

Around the same time, Jo Ann Rooney was nominated to be the next under secretary in September 2013 but failed to earn the support of Sens. John McCain (R-Ariz.) and Kirsten Gillibrand (D-N.Y.) during her confirmation hearing. Her nomination was withdrawn over a year later. About another year went by before Davidson was nominated for the post.