To deliver the first Ohio Replacement Program (OR) boats on time and cost without sacrificing performance on the Virginia-class submarines – and while adding a new Virginia Payload Module segment into the attack boats – the Navy decided to look holistically at the workload across the two yards and make adjustments.

“To execute this strategy, General Dynamics Electric Boat Corporation (GDEB) has been selected as the prime contractor for OR with the responsibilities to design and deliver the twelve OR submarines. Huntington Ingalls Industries- Newport News Shipbuilding (HII-NNS) will participate in the design and construct major OR assemblies and modules leveraging their expertise with VCS construction,” Navy spokeswoman Capt. Thurraya Kent said in a statement today.
“Both shipbuilders will continue to deliver [Virginias] throughout the period, with GDEB continuing its prime contractor responsibility for the program. Given the priority of the OR Submarine Program, the delivery of [Virginias] will be adjusted with HII-NNS performing additional deliveries. Both shipbuilders have agreed to this build strategy.”

Rep. Joe Courtney (D-Conn.), whose district includes the Electric Boat yard and who serves as the top Democrat on the House Armed Services seapower and projection forces subcommittee, said today he was pleased that the plan also calls for continuing to build two Virginia-class subs a year through at least 2023 – whereas the Navy had previously called for building only one in 2021, the first year the service will buy an Ohio Replacement boat. The Navy is facing a submarine shortfall beginning in about 2025, and building the second attack sub in 2021 will go a long way in reducing the severity and length of that shortfall, Navy officials have said. 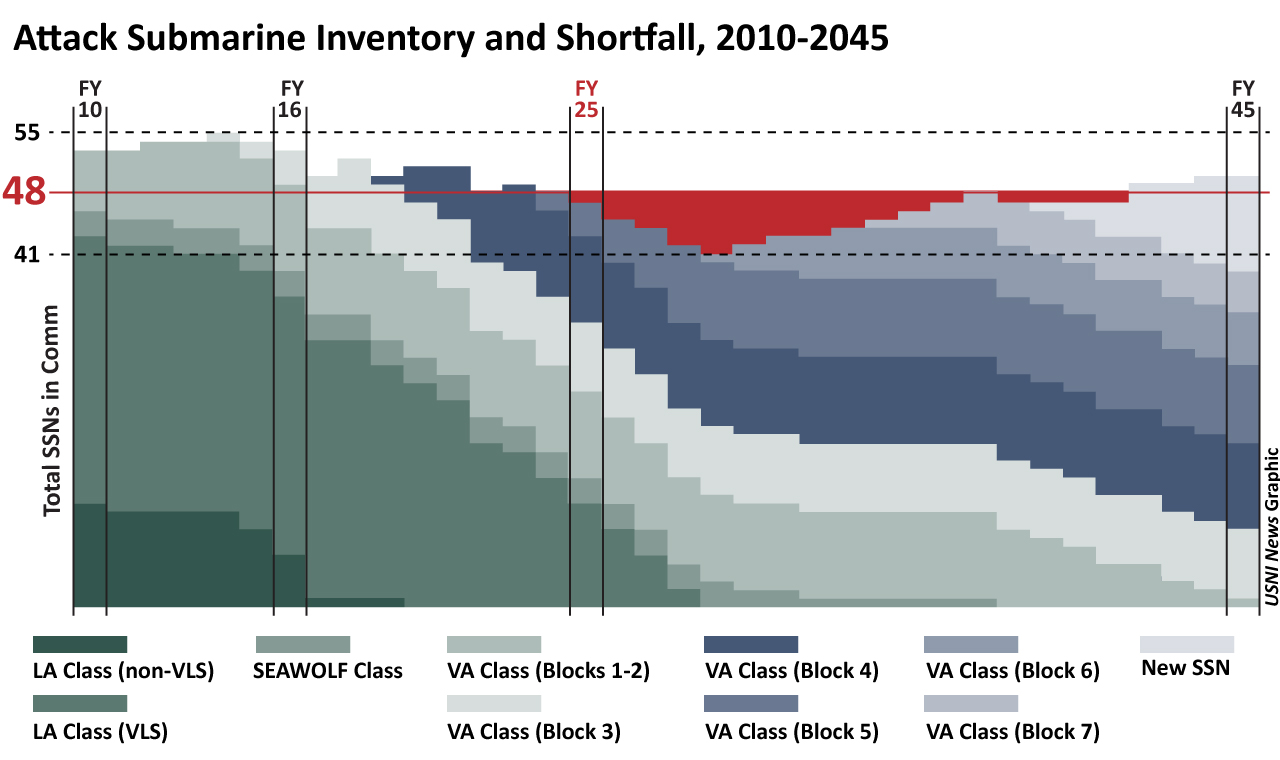 The Navy will face a shortfall in its attack submarine force beginning in the mid-2020s, and the service hopes to blunt the impact of this bathtub by building one additional SSN in 2021. USNI News Graphic

Director of Undersea Warfare Rear Adm. Charles Richard (OPNAV N97) told USNI News in a March 22 interview that building the second SSN in 2021 “is one of the best opportunities that we have to take action to address” the upcoming shortfall.

“It paints about 27 percent of that trough, so you get that back, and that’s an opportunity you won’t have after that point – you will have other opportunities, they just wont be as effective,” he said, explaining that the 2021 submarine would erase the shortfall in years the fleet will be short just one boat and will lessen the severity of the shortfall in other years.
“And from a program I think some have described as getting 10 for the price of nine (in the previous block buy), now that they’re giving you a chance to potentially get 10 for the price of 9.4 or something and do it again, I think that’s something that deserves a hard look in terms of can we take advantage of that opportunity.”

Courtney said in his statement that combatant commanders and Navy leadership have been increasingly urgent in their testimony recently about “the pressing need to also sustain the two-a-year build rate for new attack submarines.”

“Over the last two months, experts and major combatant commanders have made it clear that our current fleet is strained beyond its ability to meet the demand for undersea capabilities – and that we need to do all we can to mitigate the looming shortfall in the decade ahead.

“The plan released today leverages the deep talent and unmatched skills of the hard-working shipbuilders at Electric Boat, and their partners in Newport News, Virginia,” Courtney added in his statement.
“The replacement of our sea-based strategic deterrent is a pressing and multigenerational commitment to our nation’s defense. With the talent of our industrial base, we have risen to this challenge in the past, and by applying the same successful approach of the team delivering the Virginia class submarines today, I am confident that we will do so again.”