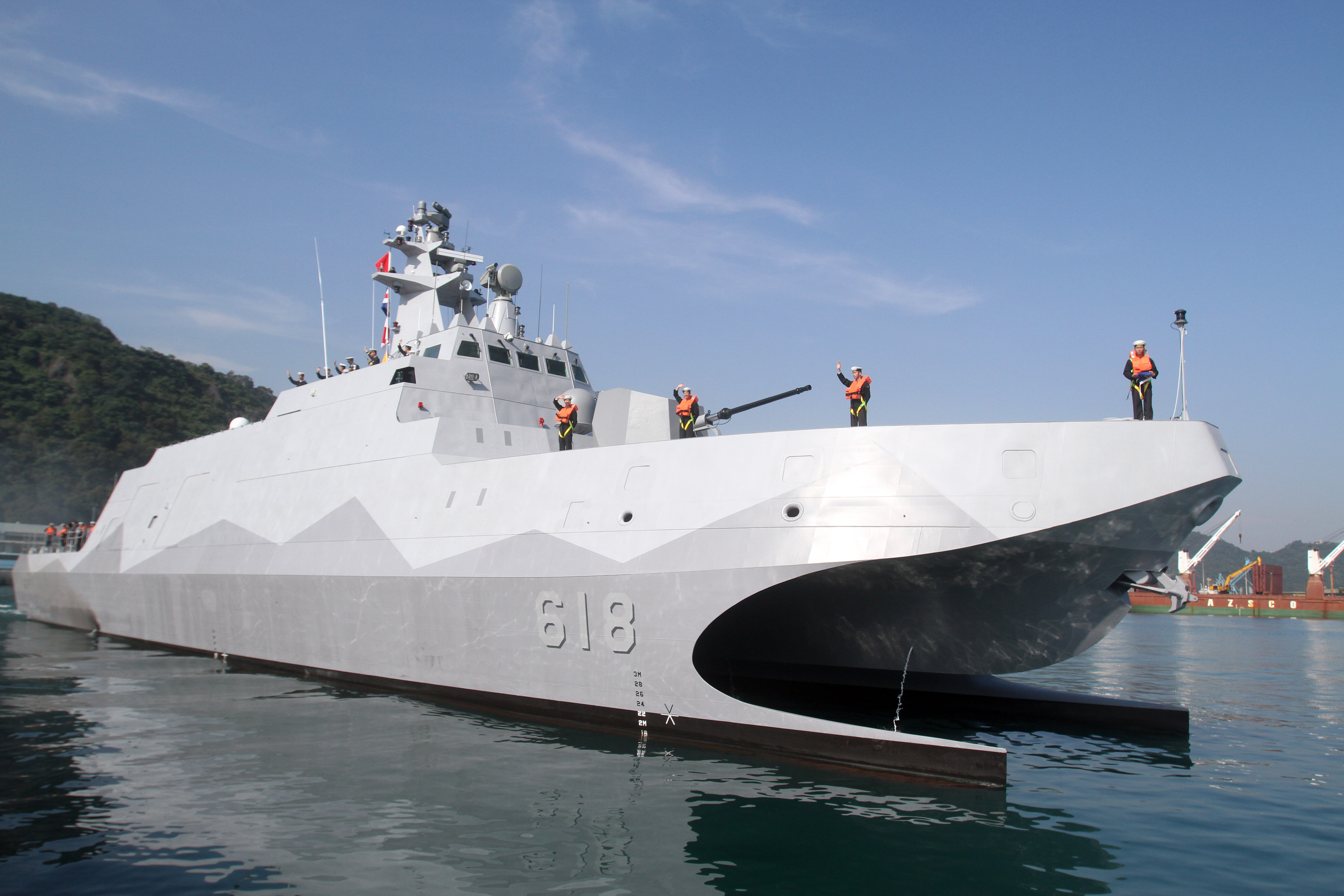 Corvette Tuo Jiang sets sail during the handover ceremony in 2014.

The Taiwan Navy (ROCN) announced a major overhaul plan that includes indigenous production of four 10,000-ton destroyers and 10-15 frigates in 2014.

The intention to build up to eight diesel-electric attack submarines with displacement between 1,200 to 3,000 tons is also part of the 20-year modernization plan. The plan is part of a broader effort to switch from reliance on foreign military sales to domestic production in key areas of Taiwan’s defense needs. Taiwan is a primary recipient of a threat stemming from Chinese military modernization and the widening gap is particularly evident in the strengths of the two navies.

However, People’s Liberation Army Navy is not the only reason why Taiwan wants to refocus from unreliable arms sales to indigenous development. Current composition of the fleet is a result of often ad hoc acquisitions, which has not always reflected what the ROCN aspired to purchase, and made cross-platform, and cross-branch cooperation difficult. Part of the overhaul plan is the Hsun Lien project, whose goal is to develop an integrated combat system common for all the combat ships. Last but not least, development of a domestic defense sector has played important role in President-elect Tsai Ing-wen’s campaign as a part of overall economic development, of which part is a revival of Taiwan’s shipbuilding industry.

The new vessels would be equipped with navalized variants of surface-to-air missiles Sky Bow/Tien Kung 3 (TK-3), Sky Sword/Tien Chien 2N (TC-2N) stored in vertical launching system (VLS), and the new Sea Oryx close-range air defense system, which bears resemblance to RIM-116 Rolling Airframe Missile and is still in development. All systems are produced domestically by the National Chungshan Institute of Science and Technology (NCSIST). Because of reported emphasis on air-defense weaponry, Singapore-based Alert 5 classified the ship as “air defense catamarans.”

However, this is likely a confusion that stems from the current stage of development of an indigenous integrated combat system code-named project Hsun Lien. Depending on VLS type, integration of indigenously-built anti-ship/land-attack cruise missiles is an open, and highly probable, option.

The heart and soul of the ROCN’s modernization plan resides in the development of a combat system utilizing distributed computing architecture, believed to be based on the H930 Modular Combat System jointly developed for the now retired Gearing class by NCSIST and Honeywell. The new system is expected to be integrated with domestically developed 3D phase array radar, a VLS system (due to a breakdown in negotiation and the difficulty of integrating Mk. 41 VLS into existing hulls, the ROCN seeks to acquire the Mk. 48 VLS as a short-term solution), electronic warfare system, sonar system, and potentially a long range support system potentially in the form of a rapid-fire 5′ /L62 cannon.

The Hsun Lien project is the ROCN’s latest effort in acquiring a combat system with similar capability to the U.S. Navy’s Aegis system following the cost-related termination of the 5000-ton Aegis frigate project based on intended upgrade of existing Oliver H. Perry–class frigate ROCS Tian Dan. Hsun Lien is expected to equip all major future platforms ranging from the 2,000-ton frigate to the 10,000-ton destroyer, as well as potentially retrofitting existing platforms.

What’s the Mission for the New Vessels? 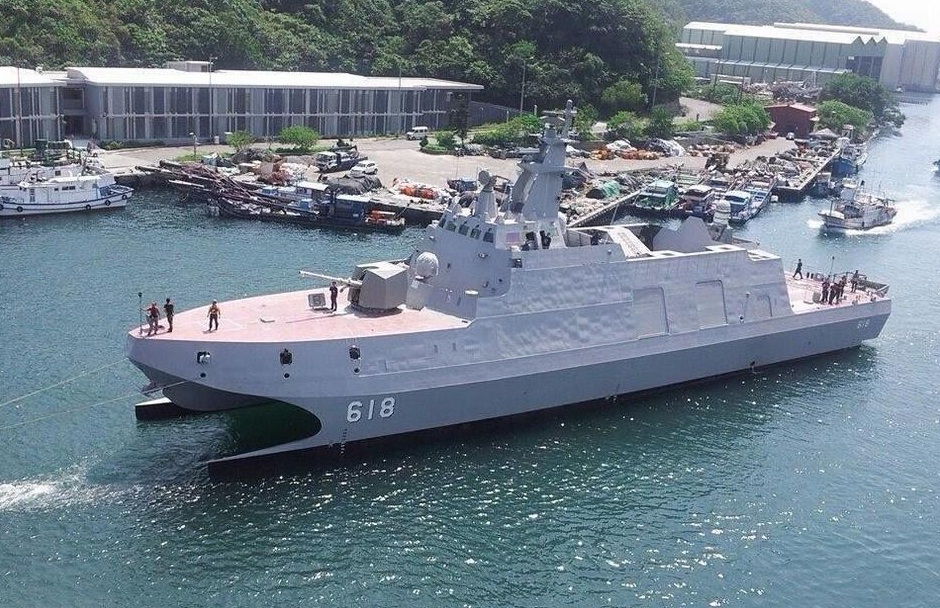 The expected resemblance to Tuo Jiang and the reported emphasis on air defense equipment could invite speculations that the ship could serve as point defense escorts to a potential missile boat wolfpack, protecting ships such as the Tuo Jiang class, which is extremely vulnerable against airborne anti-ship missiles. However, this mission for the new ships is extremely unlikely. Granted, Tuo Jiang was criticised for its lack of strong air defense but the critique is rather misplaced. Tuo Jiang‘s most significant protection is low radar cross section (RCS), of which effect multiplies when operating closer to Taiwan’s coastline. Inclusion of significantly larger vessel would only draw attention and completely defeat the purpose of providing more air defense for the group.

More likely purpose of the new class is to augment air defenses of ROCN’s Surface Action Groups (SAG), consisting of single Kidd–class destroyer and a mix of stealthy Lafayette-class and OHP frigates. Air defense and C4ISR duties in this configuration rely heavily on the aging Kidd-class destroyer, which could be easily saturated and taken out of action. Adding another unit that would ease burden of Kidd’s duties makes sense.

There is another possibility. Despite the declared intention to build new destroyers as an apparent future replacement for Kidd class, the ROCN could settle on smaller vessels with greater firepower. Either voluntarily or out of budgetary constraints. Hsun Lien system-equipped vessel with VLS, which Kidd-class destroyers do not possess, would do the job although it is not yet clear if it would also match Kidd-class’ C4ISR capability.

While the first option is highly unlikely and the answer to the other two lies in the future decisions on Kidd-class replacement, the primary purpose of what appears to be first three ships of expected total of 10-15 indigenously built frigates is to test the Hsun Lien combat system and further development of twin-hull wave piercing catamaran (WPC), concept first tested with Tuo Jiang class, applied to a significantly larger platform.

Future Layout of the Navy 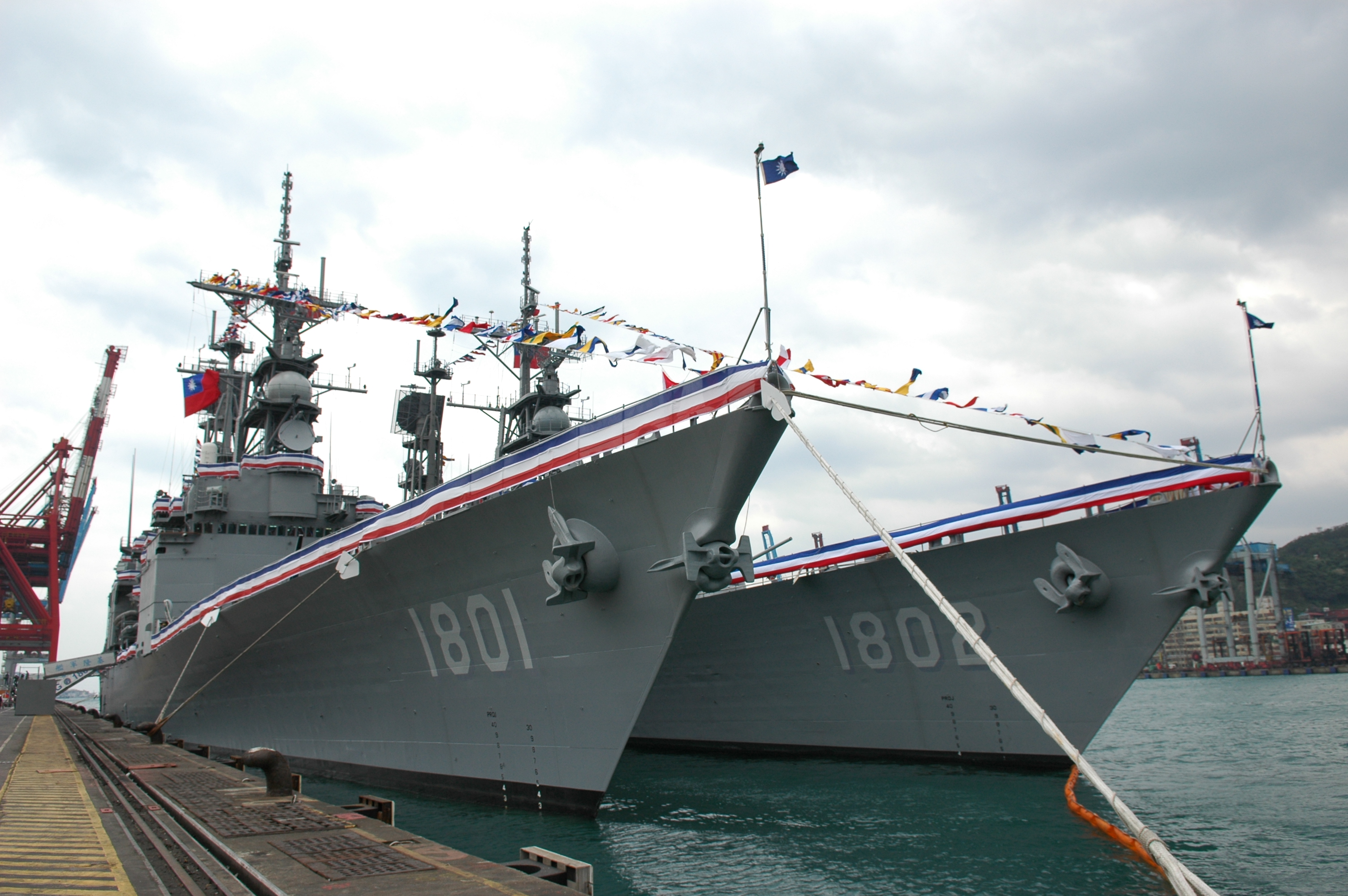 ROCN’s intention to procure four new destroyers has received critical reaction from James R. Holmes of U.S. Naval War College. Holmes argued that the overhaul plan is basically replacing the current fleet with more of the same in the times when the ROCN should move away from the sea control-minded SAG concept centered on large ships toward sea denial fleet consisting of large number of fast and stealthy missile ships. The former keeps the SAGs operating as they do at present time, the latter would prescribe use of wolfpack tactics. Holmes critique is justified in a sense that turning to sea denial fleet makes more sense given the limited resources that Taiwan navy has.

If the 20-year overhaul plan is of any guidance then it appears that Taiwanese navy takes an approach that would combine both sea-control and sea-denial mindsets. On the one hand, the ROCN pursues acquisition of sea-denial assets such as (rather underwhelming) Kuang Hua VI fast attack boats and the new Tuo Jiang-class missile corvettes, which are best utilized in the Taiwan Strait area, seizing the advantage of Taiwan’s rugged coastline in order to launch stealthy missile attacks against the enemy navy. On the other hand, as noted by Holmes, ROCNs overhaul suggest that SAGs will be preserved as building blocks of Taiwan’s naval power.

That being said, it is not entirely clear that the ROCN’s 20-year modernization plan has been approved in its entirety. However, whether or not the navy will proceed with acquisition of big ticket platforms has no bearing for continuation of Hsun Lien project as a future central element of all ROCN’s combat ships. Out of the plan, building modular WPC-design frigates equipped with VLS is the least controversial part.

One thing is clear, Taiwan is dead-serious about boosting its indigenous warship building capability while pursuing innovative designs across various platforms.