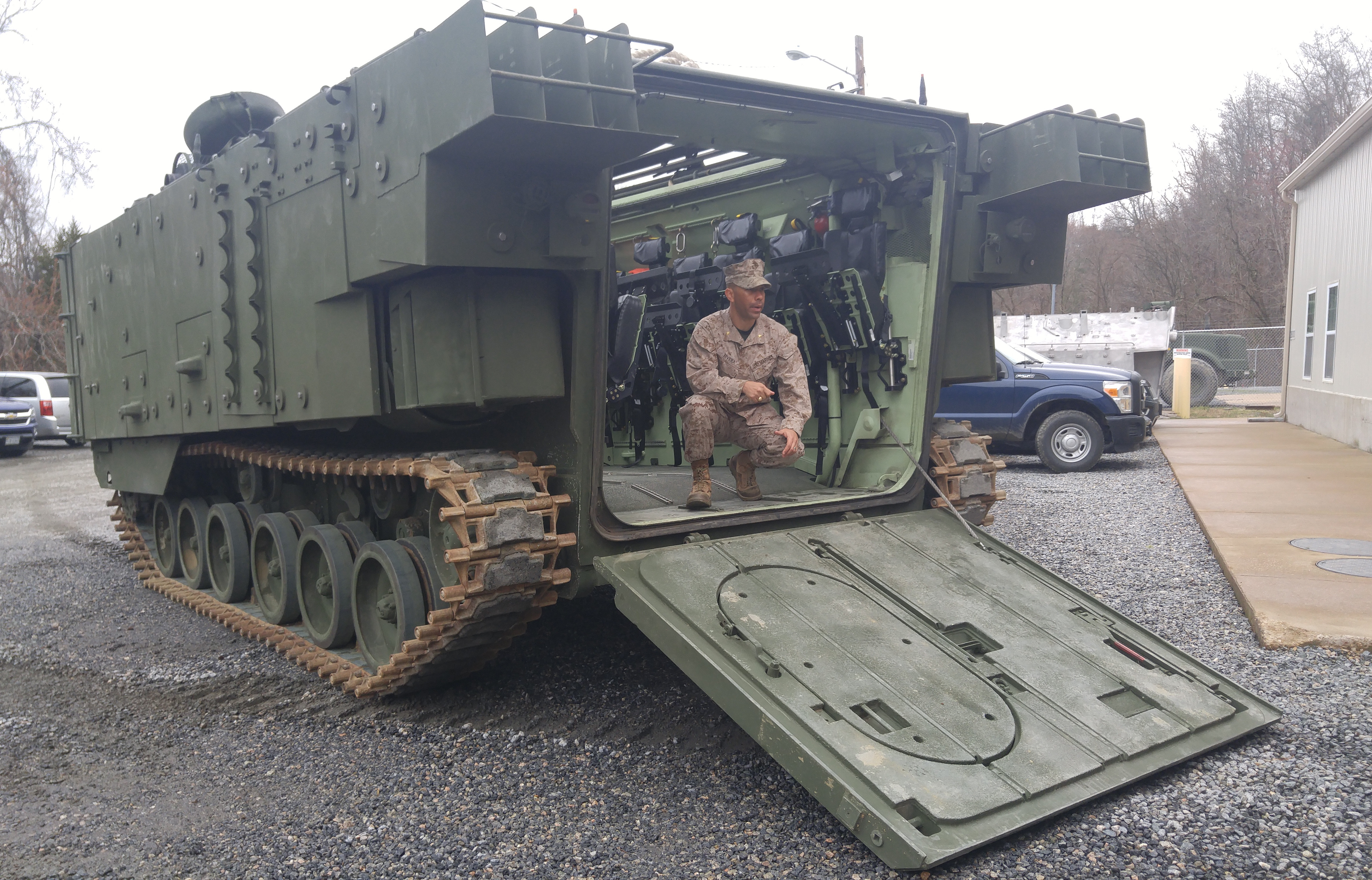 MARINE CORPS BASE QUANTICO — The Marine Corps plans to acquire half its needed amphibious lift – six of a required 12 infantry battalions – within the next five years, and it took a step in achieving that goal by recently accepting delivery of the first upgraded amphibious assault vehicle with a survivability upgrade (AAV SU).

The Marines showed off the first AAV SU to deliver at Marine Corps Base Quantico in Virginia last week, highlighting the improvements that will help the already 40-year-old vehicle operate for another 20 years.

Chief among the improvements is greater blast protection – including a 2.25-inch aluminum plate underneath the vehicle, strengthened side armor and blast-mitigating seats – but the Marine Corps opted to address other performance and obsolescence issues while overhauling its vehicles, Program Manager for Advanced Amphibious Assault John Garner said at a media event at Quantico on March 15. To avoid sacrificing land and water performance while adding the weight of the armor, the vehicles also received new and improved shocks, transmissions, water propulsion systems and more, he said.

AAV SU team lead Maj. Paul Rivera said at the event that the upgrade effort should help increase water speed and performance due to new axial flow water jets that allow the AAVs to focus the energy of the water being pushed out the back of the vehicle as it swims. The effort also increases the vehicles’ reserve buoyancy from 18 percent to 22 percent, he said.

Additionally, the redesigned interior – which moves from the traditional bench seating to individual blast-mitigating seats for 18 passengers and three crew – has significantly more space and allows for storage of two days of supplies beyond the one-day supply the Marines carry on them, Rivera said.

Col. Roger Turner, director of the Marine Corps’ Capabilities Development Directorate, said 396 of the Marines’ 1,058 AAVs would go through the survivability upgrade effort, performed by SAIC. That number is enough for both the three-Marine Expeditionary Unit (MEU) steady state presence around the globe as well as a two-Marine Expeditionary Brigade forcible entry capability if needed.

SAIC has delivered one vehicle so far, and testing is set to begin later this year as more vehicles complete the upgrade effort.

“We’re really anxious to get this into test to see what it looks like in the real environment,” Turner said.
“We want to make sure we’re going to get our best value, and so we’re going to wring this thing out in test to make sure that it’s going to provide the capability we need and we get what we paid for.”

As the Marines look at future operations, the expected environment in 2020 is more lethal and complex than today, Turner told USNI News. The Marines expect to operate in an urban, littoral area, with enemies blended in with the civilian population. The enemy may use commercial-off-the-shelf technologies to fight, he said, or otherwise leverage a proliferation of technology that is unlikely to abate. And, of course, the mine and IED threat will remain, he said.

The AAV SU program was designed with those assumptions in mind. Turner said the upgraded vehicles support mounted and dismounted operations in close quarters, is reliable enough to transport expeditionary forces that can’t afford to break down or require regular logistics support, and it will be included in upcoming Marine Corps-wide radio upgrades for greater connectivity.

Turner said designing the AAV SU to these future operating assumptions was important because in five years they will comprise one third of the amphibious lift force. Four of the 12 infantry battalions would be brought ship to shore by the 396 upgraded AAV SU vehicles. Another two battalions would be lifted by the Amphibious Combat Vehicle increment 1.1, which will begin to replace the non-upgraded AAVs. And Marine Corps operational plans call for another four battalions to go ashore by air – either the MV-22 Osprey tiltrotor or the CH-53K King Stallion heavy lift helicopter.

“Our requirement is 12, so [upcoming AAV SU and ACV procurement] gets us halfway there in this next five years, so we think that’s a pretty prudent plan,” Turner said.
“We kind of need to see how the testing comes out for this (AAV SU), and for ACV, and then from there we’ll be able to make those decisions going forward. But that puts us in a pretty good position, with six battalions that can go via surface.”

Turner said decisions about the remaining two battalions of ship-to-shore lift would be made after AAV SU and ACV testing – the Marines could move forward with ACV 1.2 plans or find another course of action – “but at least we know in the next five years kind of where this is going to go.”