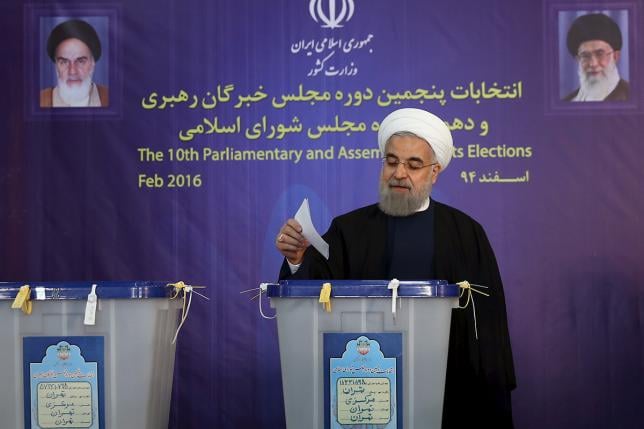 Last week’s elections in Iran served as a good barometer for gauging the mood of the Iranian electorate following the implementation of the P5+1 nuclear agreement in late 2015.

The elections saw moderate reformist candidates that back President Hassan Rouhani gain a 2-1 advantage in the Iranian Parliament. All 30 of Tehran’s parliamentary seats went to the moderate-centrist coalition candidates. In the election of clerics for Iran’s Assembly of Experts, the pro-Rouhani moderates also won additional seats. Most experts believe that this assembly will select the replacement for the aging, and ailing Supreme Leader Ali Khamenei—thereby having a long-term impact on the future of Iran.

Another surprising outcome was that the election results came despite vehement attacks from conservative leaders, massive disqualification of proposed reformists candidates and voter intimidation from Iran’s hardline political right. The BBC reported that the chief of staff of the Iranian armed forces, Hassan Firouzabadi, tried to discredit the election results by claiming British and American interference.

To an Iranian audience, Firouzabadi’s comments accusing the reformists of being “followers of the British,” were meant to stoke fear that Iran’s shifting political landscape is taking the country back to the days when the Americans, and before them the British, pulled the strings in Iranian politics. But despite all of the attempts by the ruling conservatives to hold on to power, when the votes were tallied a moderate-reformist coalition came out on top. These results prove that the majority of the Iranian people agree with Rouhani’s rapprochement with the west.

A similar effort to disqualify reform-leaning candidates in Iran’s 2012 presidential election left the more centrist Rouhani as the only alternative to the conservatives on the ballot. He was elected despite the strong opposition from Iranian conservatives.

Soon after taking office, Rouhani took great political risk in negotiating the P5+1 agreement. Now fully implemented, the agreement has all but shut down Iran’s nuclear program, but it resulted in the end of sanctions. Probably with these elections in mind, Rouhani set out to prove that the deal was worth it.

In January, the lifting of sanctions on Iranian finances freed about $100 billion in frozen assets that are now available to aid Iran’s ailing economy. Rouhani followed up the lifting of sanctions with a European shopping expedition that netted big deals for Iranian aerospace and other industries. One such multibillion-dollar deal was for 114 new commercial jet aircraft from France’s Airbus Industries. The deal will include training, and airport upgrades that Rouhani promises will bring Iran’s air service into the 21st century. Global business news outlets reported in late January that “Iran had rejoined the global economy.” Rouhani is riding a wave of popular approval at home, and those candidates supporting him are drafting in his wake.

In 2012, and last week, what is undeniable about the elections is that the Iranian people will elect the most reform minded candidate that the clerics will allow on the ballot. This fact reveals the true desires and hopes of many people in Iran. If not for the control measures put in place by the ruling clerics, one would have to guess that reformists would win in a landslide. Perhaps the metered approach to reform will leave enough Iranians satisfied with a gradual restoration of the personal freedoms they so desire, while allowing the clerics to maintain social order? Time will tell.