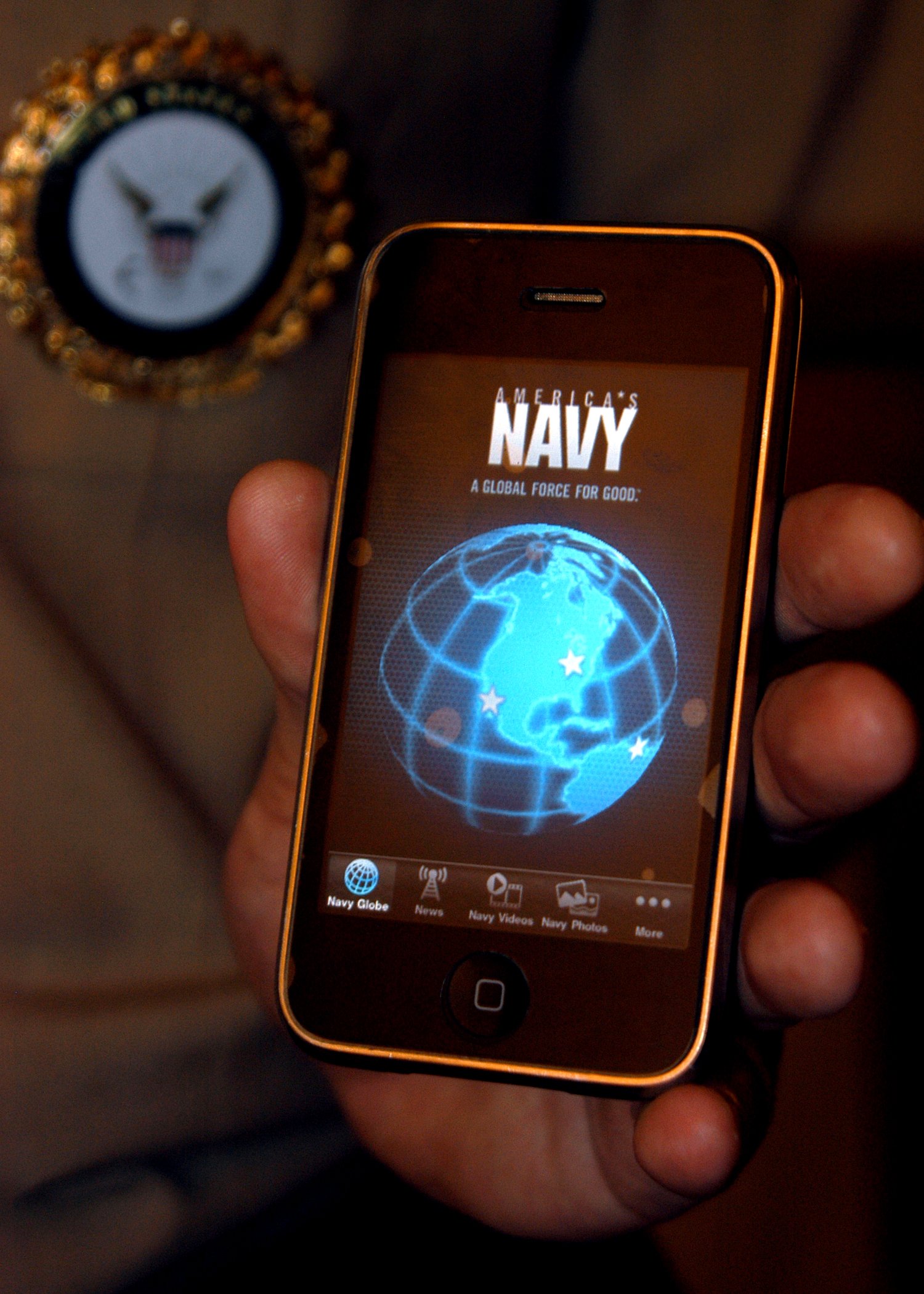 SAN DIEGO — In the Navy, the BlackBerry is about to go the way of sound-powered phones and signalmen.

The ubiquitous handheld device is being phased out by Space and Naval Warfare Systems Command for thousands of Navy Marine Corps Intranet (NMCI) users by the end of April.

Authorized users have been swapping their Navy-issued BlackBerrys for iPhones at a good clip since SPAWAR announced the transition to Apple iOS and Android smartphones last year. “BlackBerrys are almost out of the Navy inventory,” Rear Adm. David H. Lewis, head of Space and Naval Warfare Systems Command, told an audience Thursday on the second day of the West 2016 conference hosted by U.S. Naval Institute and AFCEA International. “We’ve just started expanding to Android devices.”

When the Navy began to phase out BlackBerry for its NMCI users in December 2014, it had 24,590 BlackBerry accounts and 18,624 active users on its books, said Marty Brown, the mobility lead for NMCI. As of this week, about 3,100 BlackBerry users still had to make the transition, which should be completed by March 31, said Ed Austin, spokesman for PEO-Enterprise Information Systems.

So far, about 24,800 iPhones are active, “and it’s increasing by about 700 a week,” Brown said. He expects it to peak at 34,500. “The transition is going extremely well,” he said. Navy Recruiting Command was among the first to swap BlackBerrys for smartphones for its recruiters.

The transition to Android has taking a little longer than Apple devices. Brown recently got authority to test the Android operating system and, so far, he’s put 48 Androids to the test. “We are making sure they are every bit as secure and that we can properly manage them. We are working out some of the bugs because Android has a different control than the iPhone,” he said.

What gives the user NMCI access is the Good app. The secured mobile platform application developed by Good Technology, recently acquired by BlackBerry Limited, lets the user safely access and lock into the intranet. The app links users to their email, calendar, tasks and documents in NMCI, all housed inside a “container” secured with heavy encryption. The app automatically wipes the container if someone tries to crack into it and sends a report to NMCI management. “If you lose the phone, we can wipe the phone or wipe the container,” Brown said.

“You have to enter a complex password to get in,” Brown said. “Everything inside of that is protected. You can’t export anything out of the container, you can’t take anything from your native phone into that container. It connects back through a VPN (Virtual Private Netowork) via the Navy Enterprise to get email. When we start putting more apps in there, the apps will go back through that same VPN. So we can control what this phone does.”

“The beauty of that is, the rest of the phone is mine,” he said. That “dual persona” enables the user to use the smartphone or tablet for personal or non-Navy use, with restrictions prohibiting illegal use and forbidden apps. Inside the container will be a “white list” of approved authorized apps. Someone downloading an illegal app on the “black list” won’t get access to NMCI, he said, “and we will know who you are.”

Like with BlackBerry, the Navy pays for the phone and data/text plan. But the smartphone’s app store is connected to the user’s personal credit card, enabling purchase of apps for work or personal use, such as games or banking apps. Users can activate and use the Wi-Fi to access guest Wi-Fi connections including their home networks to download apps and iOS updates.

Secured Internet access within the Good container is in the works, and Brown expects that to come around June. He’s also looking at apps that allow users to edit documents on the phone and notetaking that synchronizes with Outlook, he added.

The Navy decided to leave BlackBerry behind and go in the direction of the wildly popular iPhones and Android devices. “Our thought was, why do you force people to use a device they wouldn’t pick for themselves in the marketplace,” Brown said. “By and large, it’s been extremely positive. I love my iPhone. This is the greatest thing I have.”

The Good container hasn’t won over everyone. The biggest complaint? A user has to enter a password every time, and to ensure it’s secure, it requires a complicated password that can’t be automatically saved. Alternative access like those from a thumb reader don’t meet the military’s higher security requirements.

It won’t be the definitive end to the BlackBerry’s relationship with the Navy. Some NMCI users will retain their BlackBerrys. The transition is limited to NMCI, for now, Brown said, and doesn’t affect BlackBerry users on the Navy’s overseas networks: CANES, the Consolidated Afloat Networks and Enterprise Services that’s the Navy’s tactical afloat network, and ONE-Net, which supports overseas shore commands and are doing separate transitions.