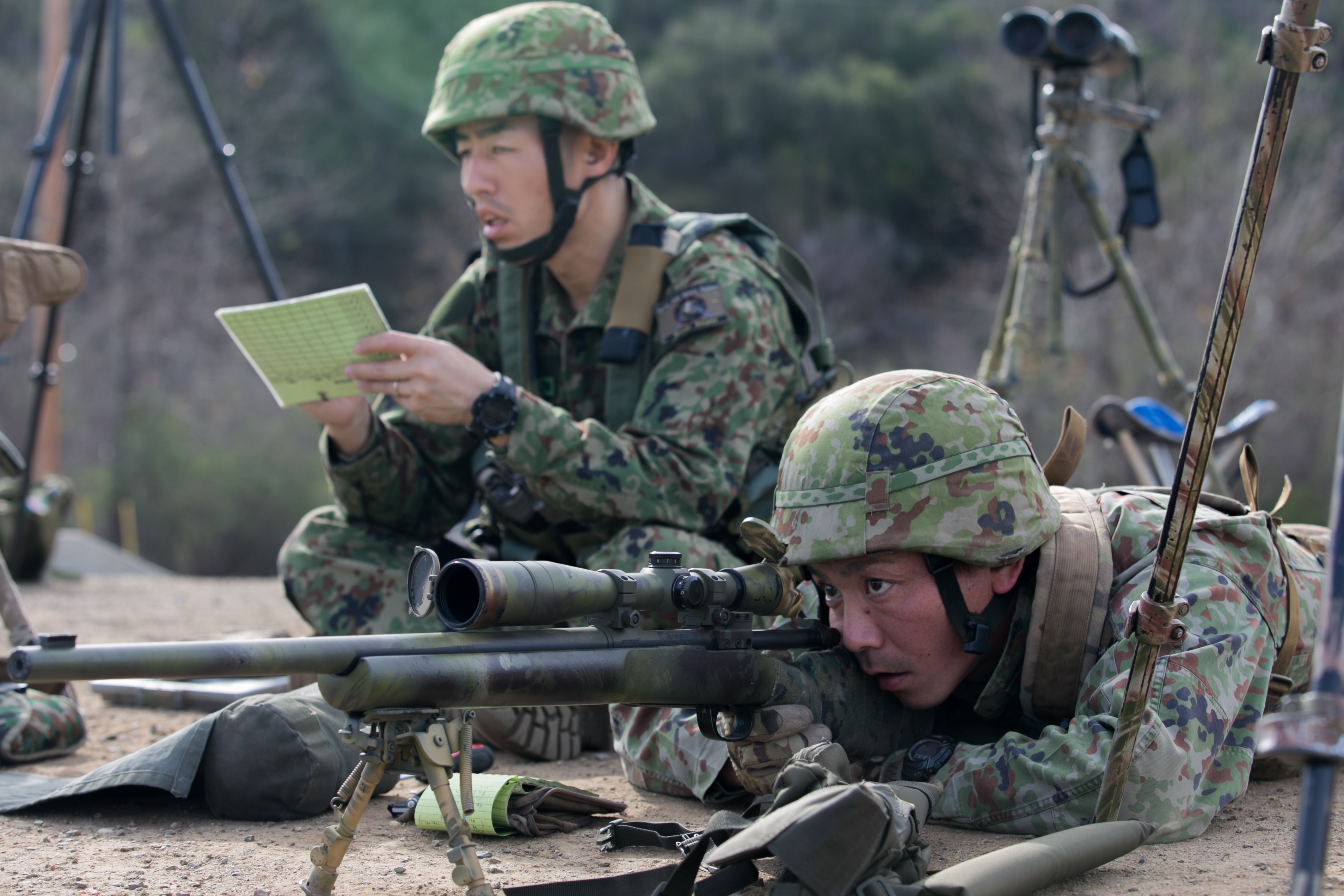 CAMP PENDLETON, Calif. – Just days after the official kick-off to the annual Iron Fist 2016 bilateral exercise, a small, elite group of Japanese Ground Self-Defense Force soldiers dove into training for what they like to do best: Sniping.
A dozen or so Japanese snipers gathered Thursday (Jan. 28) at Range 218-A, a multiple-use, unknown distance range in the heart of Camp Pendleton. Over a three-week period during Iron Fist, which began Jan. 22, the sniper section with the JGSDF’s Western Army Infantry Regiment will be working closely and training with their U.S. Marine counterparts.

While in California, the Japanese snipers – all relatively seasoned staff NCOs by comparable ranks – will be getting knee deep, literally. They will practice urban sniper operations and small-unit tactics and stalking and concealment training in a “crawl-walk-run” fashion planned with the Marines over the three weeks.

Instructors with the 1st Marine Division’s Pre-Scout Sniper Course run a six-week program designed to prepare infantrymen and screen potential students to attend the 12-week resident Scout Sniper Basic School. During Iron Fist, the instructors, all seasoned snipers, are providing guidance and mentorship to the Japanese sniper section, who go through similar basic instruction and training back home in Japan.

“Pretty much everything they do is modeled after us, for the most part,” Staff said Sgt. Matthew Solowynsky, chief instructor of the division’s preparatory course. “We are here obviously for oversight and supervision, but for the most part, they are self sufficient.” 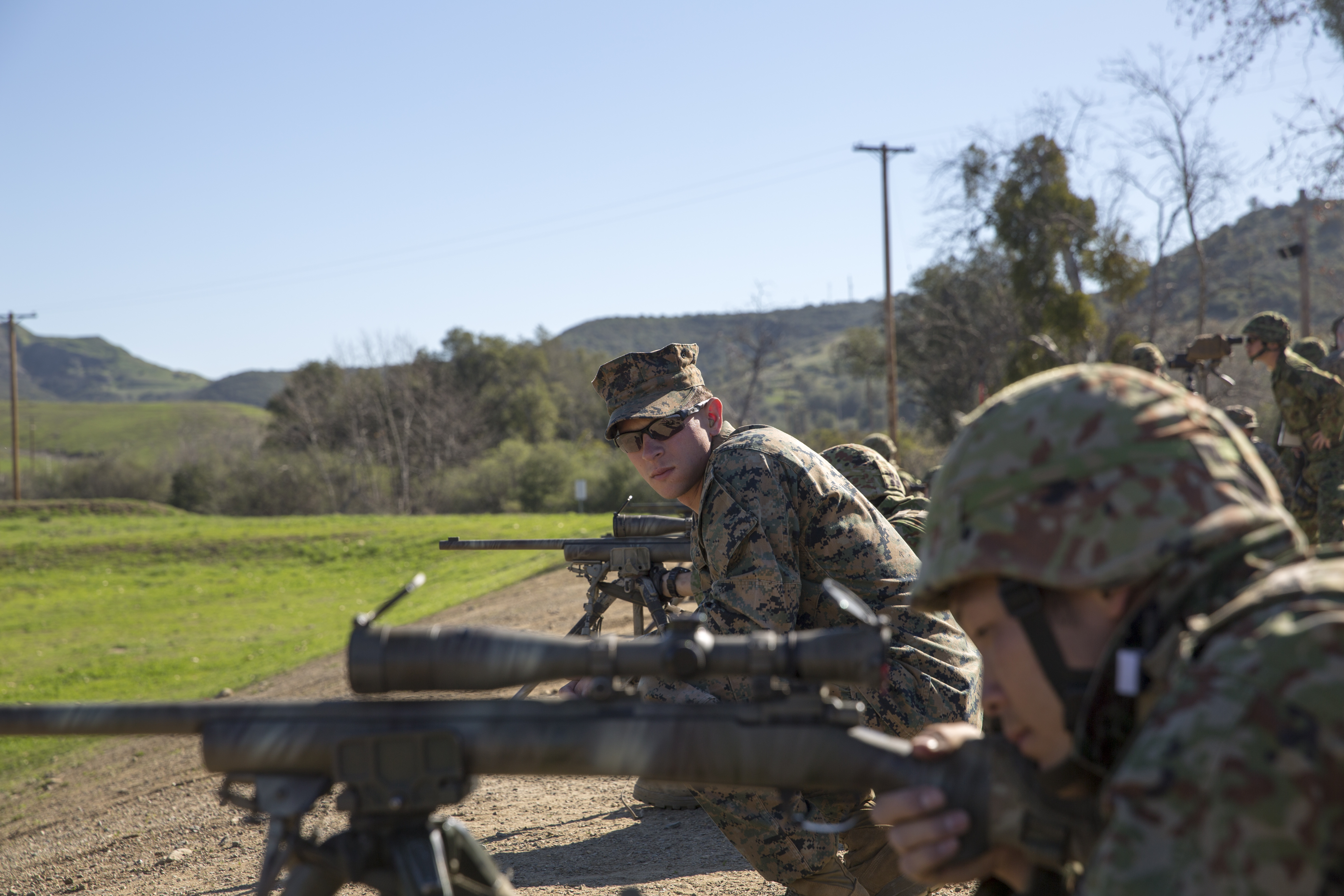 The training during Iron Fist will help enhance soldiers’ individual skills and build on the sniper capability planned for the new Amphibious Rapid Deployment Brigade, set to go operational in 2018, said Lt. Col. Michihiko Yufune[cqgf], a JGSDF staff officer in charge of bilateral exercises. Japan military officials are still working on the organizational structure, Yufune said. Just how many sniper units the brigade will have isn’t yet clear, but he said they plan to increase existing numbers. Like in the Marine Corps, snipers are considered specialized units, with only the best shooters among them.

For the Japanese snipers, Camp Pendleton isn’t a stranger: Most participated in the 2015 and 2014 Iron Fist exercises here. For this year’s range shoot, though,instructors had them use a tripod when firing from the standing and kneeling position, along with firing from the prone position – and all while wearing their basic field gear. “So they’d have to adapt their gear and find a way to get into their shooting position,” explained Solowynsky.

The six Japanese sniper teams– a soldier firing the M24 sniper rifle organic to the regiment and a spotter with Leupold spotting scope – didn’t know the distances to each of the 10 metal targets, each marked in order, spread from left to right across the range. Targets ranged from 225 yards to 731 yards away. A day earlier, they walked the range, taking close note of berms and hills and differences in elevation and terrain.

When firing, they’d have to figure out the distance to the target and use the reticle in the 12×40 spotting scope and make adjustments for factors such as wind, terrain features and humidity that can affect the trajectory of the round as it zips across the range. “Every little thing adds up,” said Staff Sgt. Mason Wilhemy, a primary marksmanship instructor with the Pre-Scout Sniper Course.

Before they’d start shooting, the Marines gathered with the soldiers and their platoon sergeant, gathered in a circle for a briefing. “Wait to pull a weapon off the line until we call the line cold,” one of the instructors told them, as a soldier translated it into Japanese. 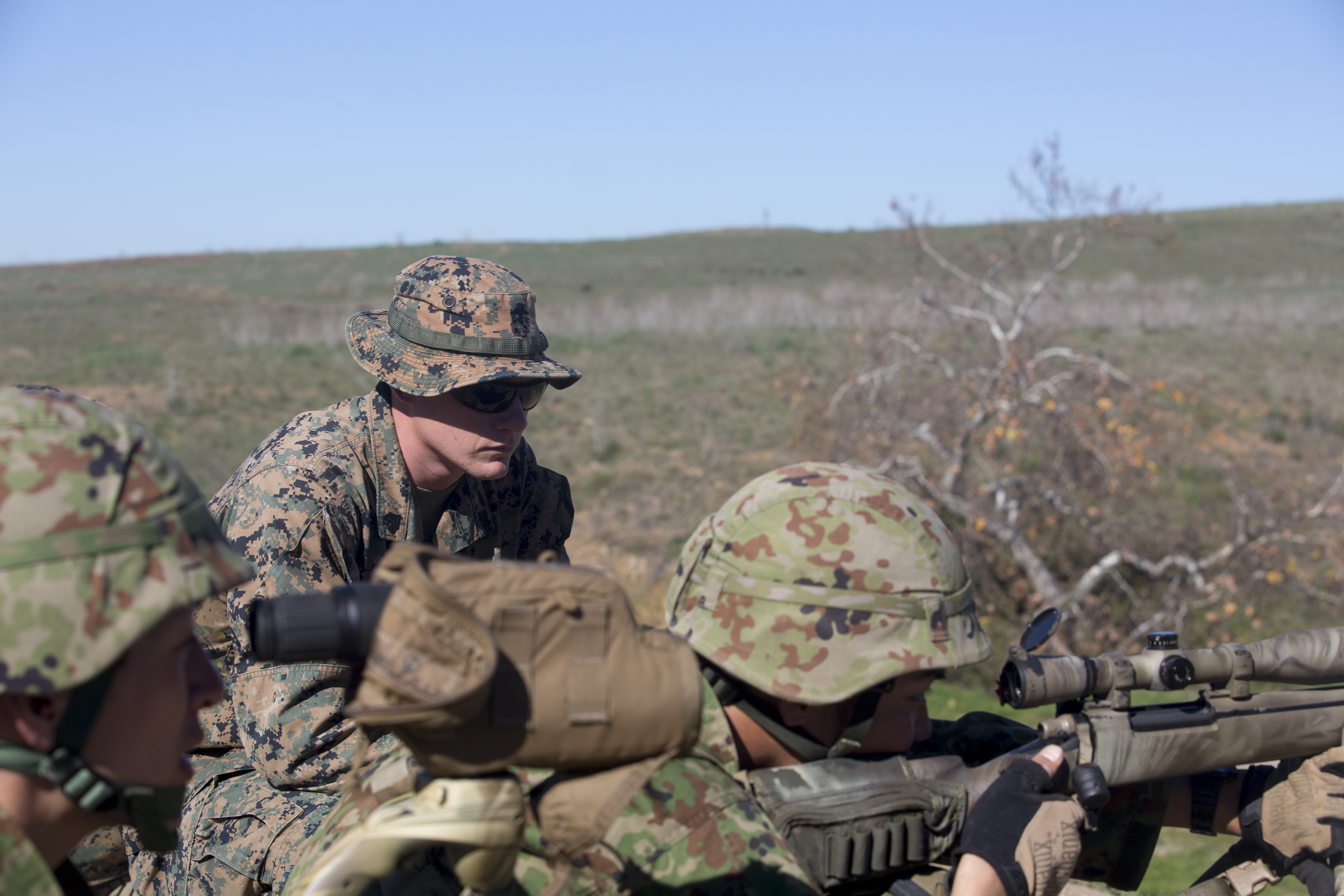 The shooting team – sniper and spotter – moved to their firing positions along the berm. They kept their range cards and hand-drawn sketches of the range close by. Several other soldiers stood nearby, holding pads with scoring sheets. Snipers got 10 points for a hit – 8 if they missed but got the second shot – and zero for a double miss.

Staff Sgt. Mason Wilhemy, a primary marksmanship instructor and the designated range safety officer, peered through a scope. He called hits as misses as Solowynsky walked back and forth along the gun line as each sniper took his turn.

“Gun 1,” a Marine called out. “Impact!” said Wilhelmy. “Gun 2.” “Impact!” Each round cracked and echoed in the morning air as the sniper fired from the standing position. “Impact!” An occasional “ping” or “ting” echoed back as rounds hit targets.

“Miss.” That began a five-second countdown before the sniper fired the second of two rounds alloted for that target. He’d get a call of “Impact!” or, less often, “Double miss.” The snipers were perfect in four of the 10 rounds, striking targets on their first shot each. Most misses were rectified by the second round, with just a rare few double misses.

Wilhelmy and Solowynsky noticed one sniper with several misses hadn’t locked in his left arm. That would steady the rifle and reduce the kick that’d sent the round off target, they explained. He’d later relay that advice during an impromptu debriefing with the sniper section leader, who read off the sniper teams’ scores.

“Remember, as it gets hotter to compensate,” Solowynsky told them in the debrief. “Every gun will be a little bit different… (and require) a different elevation setting, so they need to be aware of that.”

“The farther the targets, the bigger difference” in making those temperature-elevation changes, he said. “So constantly be watching. Constantly be adjusting if you need to.” And making that work heavily depends on both soldiers – sniper and spotter – working together, he reminded them. 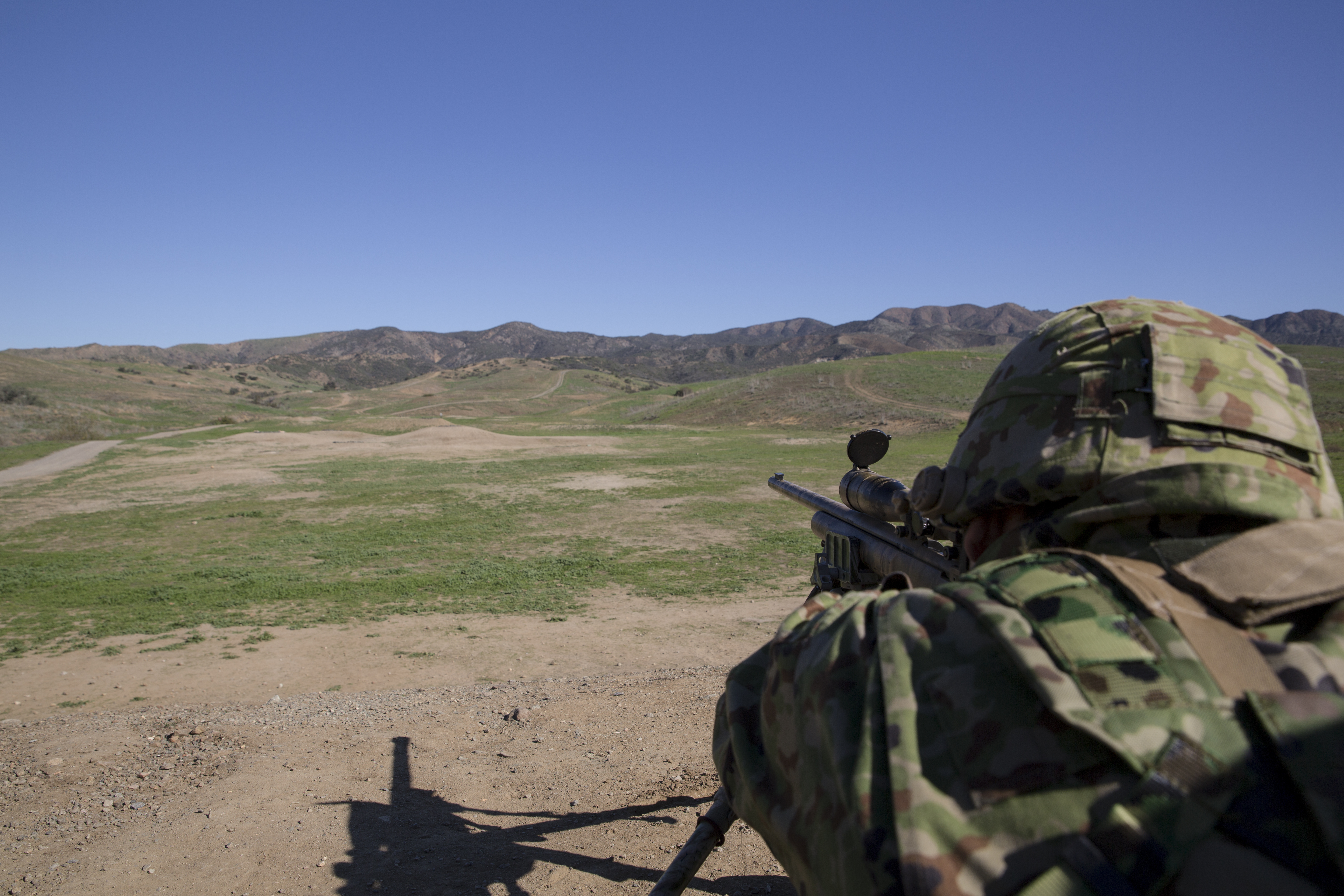 A Japan Ground Self-Defense Force soldier fires at a target while his spotter observes the impact, during an unknown distance course of fire, aboard Marine Corps Base Camp Pendleton, Calif., Jan 28, 2016. US Marine Corps Photo

One soldier, a sniper instructor and sergeant first class who on this day served as a spotter, said the live-fire shoot was “improving” their skills and giving them more realistic training. “We’ve focused on quick reload,” he said, speaking through a translator, Sgt. Yanagisako Takayuki[cqgf], a JGSDF infantry squad leader. We have improved the firing with the tripod.” (The JGSDF asked not to use the names of the snipers.)

The training with the Marines, he said, is helping bolster their sniper skills, from making calculations and adjustments on the range to stalking and infiltration skills. Along the way, they’re refining their skills for that ultimate responsibility of every sniper: Making that life-or-death shot, which comes from learning how to distinguish between enemy and friendly forces. “It’s a very important decision,” he said.

Iron Fist gives the snipers two things they don’t really have in Japan: A lot more room – and range – to train. And stories and lessons from real wartime operations. These they got courtesy of the Marines.

One soldier, also sergeant first class, was excited to have helped his teammate, firing the sniper rifle, to a successful score. But the 13-year veteran was just as eager to get lessons first-hand from the Marines. “Marines have attended real wars,” he said, through a translator, unlike their own experiences.

In fact, the Japanese snipers seemed eager to hear more sea stories and combat stories from their Marine counterparts. “We have trained a lot of times in Japan,” said the sniper instructor. “But we have not experienced a real fight, so we have observed the details…in a real fight from the United States Marine Corps.”