Textron Marine and Land Systems’ Louisiana production facility features automated welding and other innovations that will speed up Ship to Shore Production compared to the legacy LCACs. Textron photo.

The Navy’s next generation of surface connectors will be more reliable and less costly to operate after the Navy designed out the top 25 maintenance drivers from the legacy craft, according to surface connector manufacturer Textron Marine and Land Systems.

Senior Vice President and General Manager Tom Walmsley said in a briefing on Jan. 13 at the annual Surface Navy Association national symposium that the new Ship-to-Shore Connector (SSC) will take up about the same footprint as the legacy Landing Craft Air Cushion (LCAC) but will be able to haul more weight and will be simpler to maintain and operate.

“When the Navy did the concept design for the new Ship-to-Shore Connector, they took the top 25 reliability issues from the LCAC, they designed those out – things like going from four gear boxes to two gear boxes, four lift fans to two lift fans, the orientation of the engines, the aluminum selection,” he said.
“This will be a substantially better, more reliable craft, as well as cheaper on the operational side: smaller crew, better fuel efficiencies even though there’s substantially more horsepower in the modern engines.”

The craft will be operated by a pilot and copilot rather than a three-man team, thanks in part to a new joystick control system that replaces legacy rudder pedals and yoke to fly like aircraft, he said.

Walmsley added that the craft would be cheaper to build too, since Textron invested about $45 million to upgrade its Louisiana production facility – and the facilities of some of its key suppliers – to include automated welding and other innovations that cut time and cost. 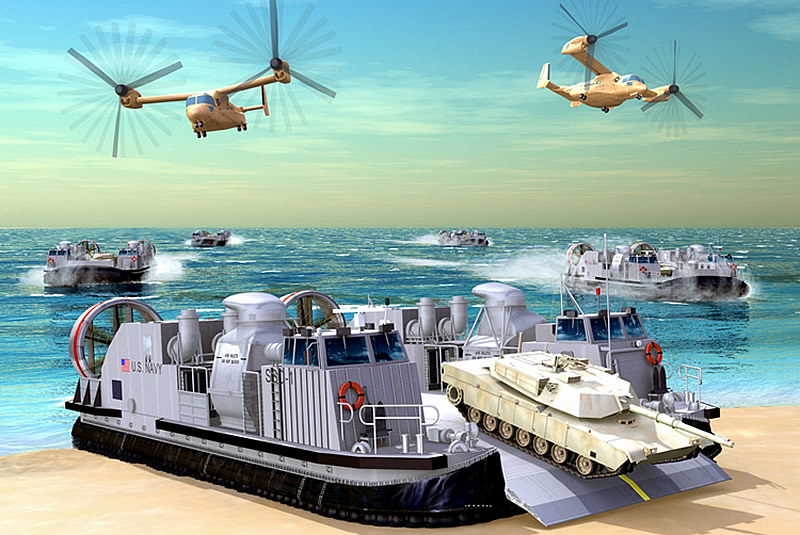 An artist’s conception of the Ship to Shore Connector (SSC). Textron Image

Those automations will also help Textron ramp up to full-rate production. Walmsley said the facility had been building the legacy LCACs at as many as 10 a year but would be able to accommodate 12 SSCs a year thanks to the automations. The company will need to do “substantially more hiring from where we are today” to get to that rate, but he said the training processes are in place to hire new employees and get them working quickly.

Textron received a $213 million detail design and construction contract in July 2012 to build one SSC that would serve as a test and trial craft, Jan Baudoin, Textron’s SSC program director, said during the same briefing. The Navy awarded a contract option in December 2012 for one more craft and another option in March 2015 for two additional craft, and Baudoin said the service is expected to award the final option in the next month or two for five more craft – bringing the total to nine.

The production rate will quickly climb, Walmsley said, making the ability to ramp up staffing important. He said he expects the Navy to put out a sole-source request for proposals to Textron later this year for the first full-rate production contract, which would be awarded in 2017. That contract should cover five craft in the first year, with the Navy soon after bumping up to eight or nine craft a year.

Textron’s first SSC is about 27 percent complete, the second is about 16 percent complete and the third and fourth should begin production within a few months, Tom Rivers, amphibious warfare program manager in the Program Executive Office for Ships, said at a Navy briefing at the same conference.

The Navy ultimately plans to buy 73 SSCs. Until the SSCs can deliver, though, the Navy is going back and extending the lives of the legacy LCACs even farther – 60 of the 72 LCACs have finished or are in the midst of a service life extension program (SLEP), bringing them from 20 years of expected service life to 30. However, some craft will need a few more years of life to avoid a surface connector shortfall while the SSC production ramps up. Rivers said two LCACs have completed a Post SLEP Extension and four more will go through that process this year. These shorter availabilities focus only on the upgrades and repairs needed to give the craft five more years of life.