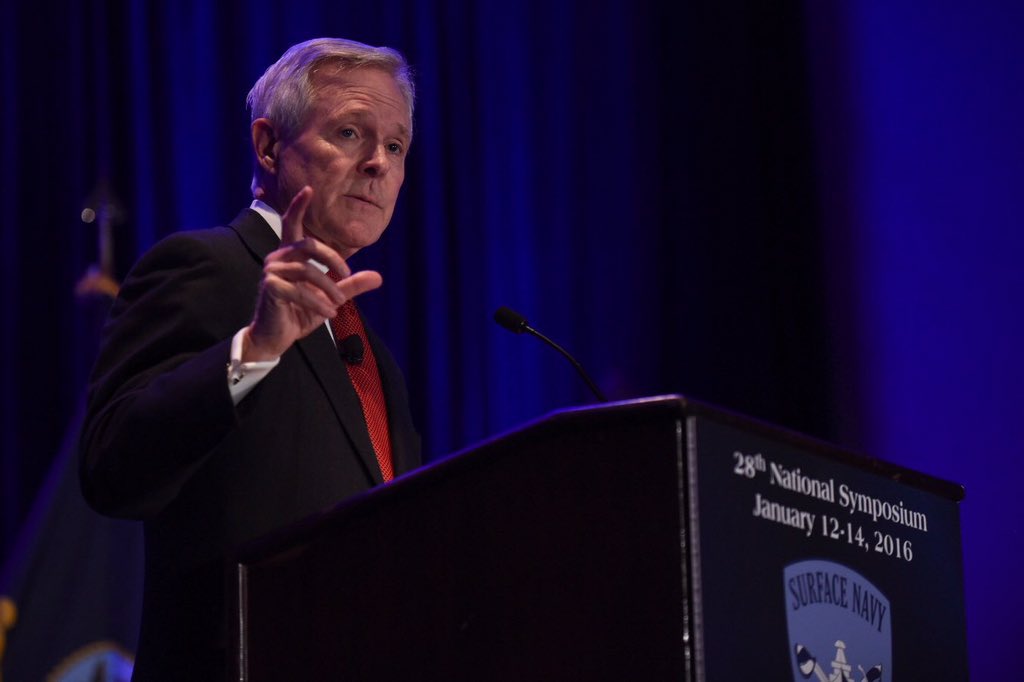 A month after a terse memo from the Office of the Secretary of Defense that accused the Navy of spending too many resources to plus up its ship numbers, Secretary of the Navy Ray Mabus defended his seven-year shipbuilding record in a speech at the Surface Navy Association symposium on Thursday.

In what will be his last address at the symposium, he highlighted his record without directly addressing the Dec. 14 directives from Secretary of Defense Ash Carter that called for trimming 12 Littoral Combat Ships and frigate from the Navy’s planned total 52.

“During my tenure, the fleet has grown faster than any time in modern history. In the seven years following 2009, we have contracted for 84 ships, more than the last three Navy secretaries combined,” he said.
“And we will have done so while increasing aircraft purchases by 40 percent, all with a budget – a topline – that’s gone down 20 percent.”

The Dec. 14 letter from Carter to Mabus said the Navy had “overemphasized resources used to incrementally increase total ship numbers at the expense of critically-needed investments in areas where our adversaries are not standing still, such as strike, ship survivability, electronic warfare, and other capabilities.”

Mabus did not address any certain changes outlined in Carter’s memo for the Fiscal Year 2017 budget responding to future funding deliberations as “predecisional.”

He did say the fleet size the Navy needed – 306 ships – would be achived with the ships the Navy has either approtirated, under construction or under contract.

Following the leak of the memo debate over the repercussions turned toward a balance of presence – being visible widely – versus posture – how those ships are positioned and armed to fight.

Conceptually, Mabus said for the Department of the Navy they were one and the same.

“Those two concepts maybe broken apart for other services, but for the Navy and the Marines there’s a whole lot of overlap. It’s almost exactly the same thing,” he said.
“That unrivaled advantage, that presence — on, above and beneath the seas — reassures our allies and deters our adversaries. There is no next best thing to being there… Presence is our posture.”

Elaborating after the speech with reporters he said. “those two concepts maybe broken apart for other services, but for the Navy and the Marines there’s a whole lot of overlap. It’s almost exactly the same thing.

In addition to affirming his acquisition record Mabus addressed ongoing criticism of the Navy’s fleet size by Republican candidates on the campaign trail.

Republican presidential candidates Sen. Marco Rubio, (R-Fla.), former Florida Gov. Jeb Bush and Ben Carson have used talking points comparing the current fleet size of about 270 to the U.S. World War I tally as an indication of a lack of military strength, according to a Thursday report in The Washington Examiner.

“Statements like that may advance personal agendas, but they demonstrate a fundamental misconception about our Navy and what we are up to,” Mabus said.

“They embolden our adversaries, they undercut the confidence of our allies and they do a disservice to sailors, Marines, the shipbuilders, the rest of industry and most importantly to this country.”
He added, “we had fewer ships than we did, but we also have fewer telegraphs.”