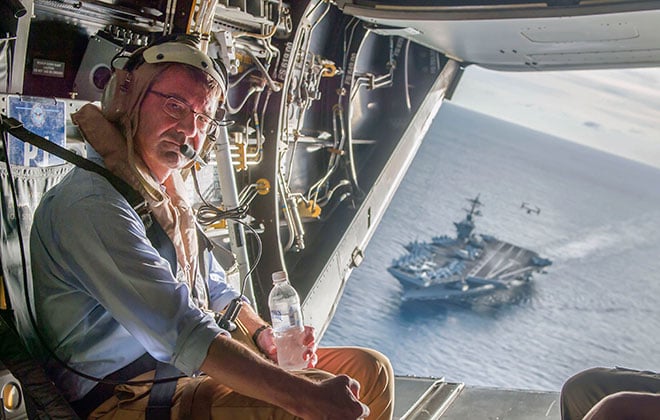 USS Theodore Roosevelt (CVN-71) in the background as Secretary of Defense Ash Carter flies in a V-22 Osprey on Nov. 5, 2015. DoD Photo

A version of this post originally appeared on Observer.com.

The United States Navy just struck an iceberg. It won’t sink the fleet, but it will damage its ability to deter emerging global conflicts. And one of those challenges became more apparent last week when the Chinese announced it was building its second aircraft carrier.

The navigational hazard was in plain sight. But last month the full danger of its unseen mass hit the Navy in the form of a directive from the Secretary of Defense Ash Carter to Secretary of the Navy Ray Mabus. The Navy Secretary was told in blunt language that the course it was following was wrong, and the sea service needed to change how it spends its money. Instead of building more ships, the Navy should invest in high-end weapons systems such as the F-35 fighter plane and more smart munitions. “While we seek to deter wars,” Carter said, it is more important to “fight and win them.”

Carter is an experienced, highly respected defense professional, and his views on curtailing shipbuilding—his exact words were that the 308-ship target “should be met but not irresponsibly exceeded”—undoubtedly reflect the President who appointed him. But this reallocation of resources will affect naval strategy, the perception of allies and foes alike, and even recruitment tactics. The shift is both shocking and dangerous.

It is a fundamental truth of warfare that it is better—strategically, tactically, and economically—to deter aggression than to have to fight to regain lost territory. The presence of a U.S. Navy ship that scares off pirates is much preferred to having to mount a SEAL operation to rescue a hijacked merchant ship and its crew. An aircraft carrier on station that discourages the building of artificial islands is more effective than diplomatic protests and bomber-flyovers afterwards.

Carter’s comment about achieving a 308 ship Navy was at best confused and at worst disingenuous. Today, the Navy has 273 ships. Given the rate at which the Navy has to retire aging vessels, the goal of 308 ships couldn’t be reached before 2022—and that was before Secretary Carter cut the number of newly built littoral combat ships and frigates from 52 to 40. Navy ships—large and small—take years to build. And diverting funds to other uses pushes the availability of those hulls out further and further.

The bigger problem is Carter’s focus on a fleet of 308 ships, and his description of anything larger as being irresponsible. The independent, bipartisan National Defense Panel Review of the President’s own 2014 Quadrennial Defense Review concluded that the fleet should be between 323 ships and 346 ships “depending on the desired ‘high-low mix,’ and an even larger fleet may be necessary if the risk of conflict in the Western Pacific increases.” In short, presence matters, and numbers count.

Four years earlier, the 2010 National Defense Panel Review—comprised of different independent-minded members—recommended a 346-ship Navy. That assessment was before the rise of ISIS, Russia’s incursion into the Ukraine, and China’s construction of artificial islands in the South China Sea. As Sen. John McCain (R-Ariz.) said before a gathering hosted by the United States Naval Institute just a week before Carter’s memorandum, “Have no doubt, our nation is confronting the most diverse and complex array of global crises since the end of World War II.”

America’s ability to prevail in those crises is not enhanced by a reliance on high-tech weaponry. Drones, smart-bombs, and cruise missiles are no substitute for the up-close, dirty, and dangerous role front-line troops, planes, and ships play in most conflicts. That is why war-fighters—and their supporters in Congress—have been battling the Obama Pentagon over retiring the A-10 Warthog. The Defense Department and Air Force brass have argued that the acquisition and operating costs of the A-10 were needed to support the F-35 program. It is an unconvincing argument. (The A-10 costs approximately $19 million per plane and $11,500 per flight hour to operate. The F-35 costs over $100 million per plane and $32,000 per flight hour.)

Over the last year, the Navy has been running television commercials—often during sporting events—designed to attract enlistments. Rather than convey a message such as “The few, the proud, the Marines,” or “Army Strong,” the Navy produced something quite different: a quick-cut montage of weapons and warriors, concluding with a single image – of a world map peppered with red pins representing the Navy’s presence. And the message, “Around the world, around the clock, in defense of all we hold dear back home: America’s Navy.”

That the Navy’s recruitment specialists determined—based on the real-life metrics of how many young men and women choose to enlist every month—that a mission-based advertising campaign connected with prospects is revealing. It demonstrates that young people, deciding whether to risk their lives in service to the nation, believe in the promise of deterrence—as well as response.

Cost overruns and delays have plagued far too many military construction projects, initiated and managed in both Republican and Democratic administrations. Carter should be focusing on making the acquisition process more efficient and accountable. And Congress should use its powers to tell the Pentagon to trust the Navy leadership’s decision to continue its mix of high and low weapons. And maintain our presence abroad.