THE PENTAGON – The Navy and Marine Corps amphibious fleet is on the cusp of two major changes – the introduction of the Lockheed Martin F-35B Lighting II Joint Strike Fighter and the growth of the fleet from 30 to 33 ships – that will change the way the fleet trains and fights, the director of expeditionary warfare told USNI News.

Maj. Gen. Chris Owens, who took over the expeditionary warfare directorate (OPNAV N95) four months ago, said in a Dec. 10 interview that his biggest priority in this new job is amphibious fleet readiness – having the maximum amount of ships deployed or ready to deploy, and ensuring those ships are maintained and modernized to stay relevant throughout their entire service lives.

To that end, the fleet stands to make some important gains in the coming years. F-35B integration efforts will bring greater capability to existing ships, helping them leverage the fifth-generation fighter capability and operate more effectively with the rest of the Navy’s surface fleet. And the larger number of ships in the amphibious fleet open up opportunities for single-ship deployments, taking on more missions in the Pacific and providing better training to sailors and Marines. 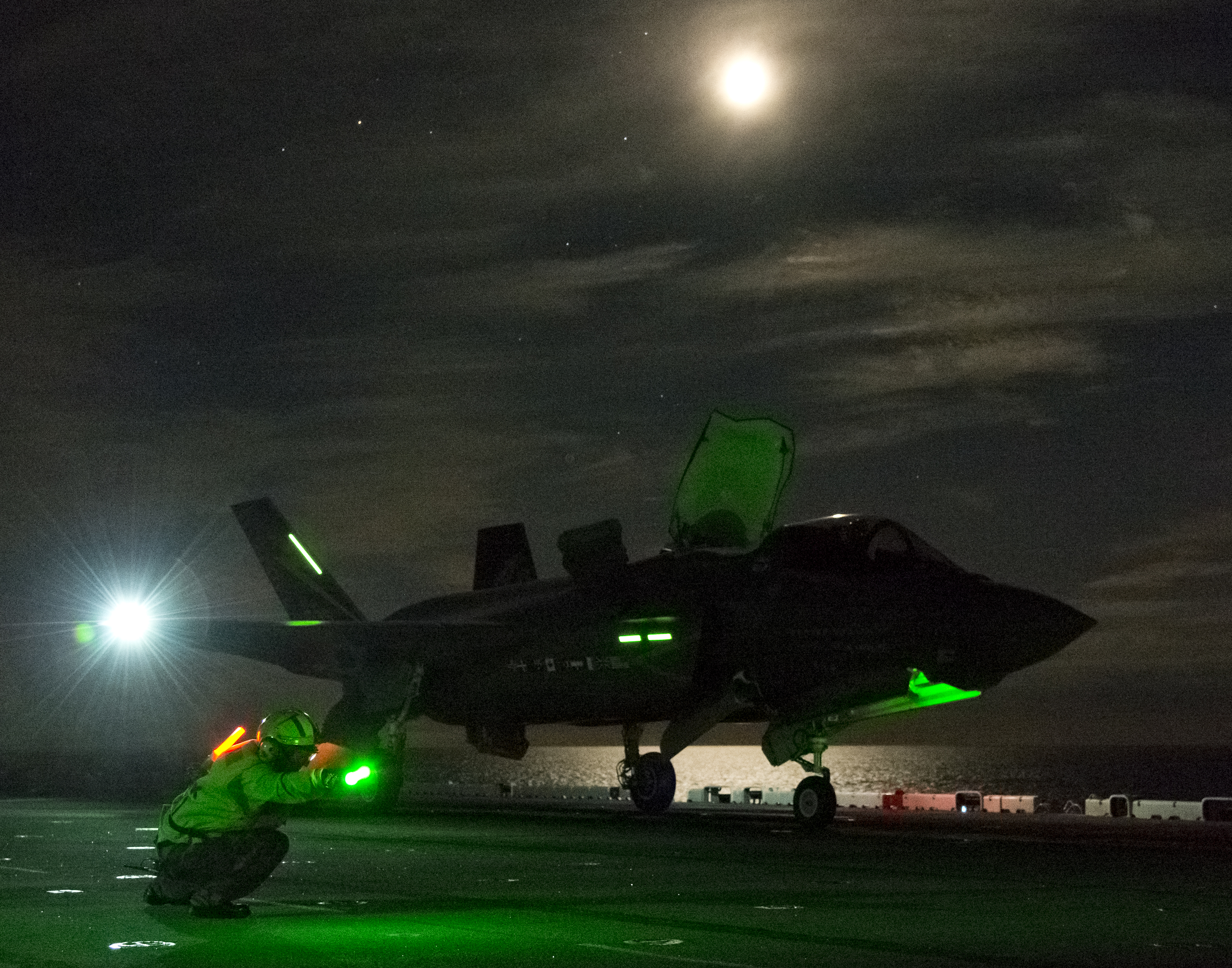 The Navy has just one ship today that is fully upgraded to support the F-35B – USS Wasp (LHD-1) – and the newest amphib, USS America (LHA-6), is in the midst of a post-shakedown availability period where the ship is getting some final modifications to support JSF operations.

USS Essex (LHD-2) will be the first big deck amphib to undergo all the JSF modifications at once in a massive 420-day maintenance period that will begin in 2016. Owens said the pipes, cables and other systems just below the flight deck will have to be pulled down so the deck can be strengthened from below to support both the weight and the heat of the F-35B, and then put back in place and tested. While that work takes place, the ship will also get upgrades to its C5I systems, the Ship Self Defense System and other enablers.

“The remainder of the ships will go in at a scheduled interval that makes sure that we have that readiness to support deployment requirements and maintaining a consistent shipyard loading for West Coast first and then shifting to the East Coast,” he said.

The benefit, though, is a major upgrade in the ships’ ability to communicate and operate with not only the F-35B but also with Navy surface ships.

“The reality is that in some ways our amphibs have not kept pace with some of the other ships in the fleet as far as that ability to network,” he said.

Marine Corps Deputy Commandant for Aviation Lt. Gen. Jon Davis has said on several occasions that the carrier strike group ships and aircraft are well connected with Link-16 and other information-passing architectures but that Marine Corps aircraft and amphibs are not included in those networks. The Marines are adding Link-16 to the AV-8B Harriers and MV-22 Ospreys, and the JSF integration upgrade will bring the ships into the network as well.

Owens and Davis co-chair an F-35B Ship Integration Council that also includes the surface and air warfare directorates (OPNAV N96 and N98) “to work through the challenges of integrating the aircraft – but not just how do we operate the aircraft onboard a ship, but how will we change fleet operations based on the abilities that the Joint Strike Fighter brings?”

The council is looking to host an exercise with the F-35B on a big deck as soon as possible – one F-35B squadron is stood up now but will not go for its first shipboard deployment until the summer of 2017 – to understand how the F-35B and the MV-22 can combine to increase the range of the three-ship Amphibious Ready Group (ARG) and embarked Marine Expeditionary Unit (MEU).

But on an even bigger scale, the Marines will have the F-35B out at sea several years before the Navy has its F-35C onboard a carrier, so “as you look at having fifth-generation fighters aboard amphibious big decks before we have them aboard CVNs, how do we pair up the amphibious big decks with the carrier strike groups to provide that fifth-generation capability to the larger fleet and integrate with the fourth-generation capability that is resident on the CVNs?”

Owens said Wasp will begin basic training in preparation for a 2016 deployment – its first since 2004 – once the ship finishes its maintenance availability, and America is eventually headed for Japan to serve as the only big deck in the Forward Deployed Naval Force, though the timing of that move is still undecided. Those two ships will be available for experimentation to understand how to best leverage the F-35B and MV-22 pairing – which will be particularly important for America, which has no well deck for surface connector operations and instead has an enhanced aviation capability.

Rather than focusing on the lack of a well deck, Owens said “the biggest challenge is going to be how we will exploit the capabilities of the Joint Strike Fighter in a deployed environment, that’s going to be the biggest challenge. How are we really going to use that aircraft and take advantage of the tremendous leap forward in capabilities that that brings to the fleet and to the embarked Marine force?”

For troop movements ashore, Owens said America would rely on helicopters. The ship may also sail with three smaller amphibious ships instead of the usual two to provide more connectors in the ARG. And America could eventually be supplemented with a second big deck in Japan – Owens said that right now the plan is to have just one big deck in Okinawa, “but we’re looking at options. As we’re finally getting out of our historic minimum of amphibious ship fleet size, we’re looking at how best to distribute those ships to meet our requirements.” 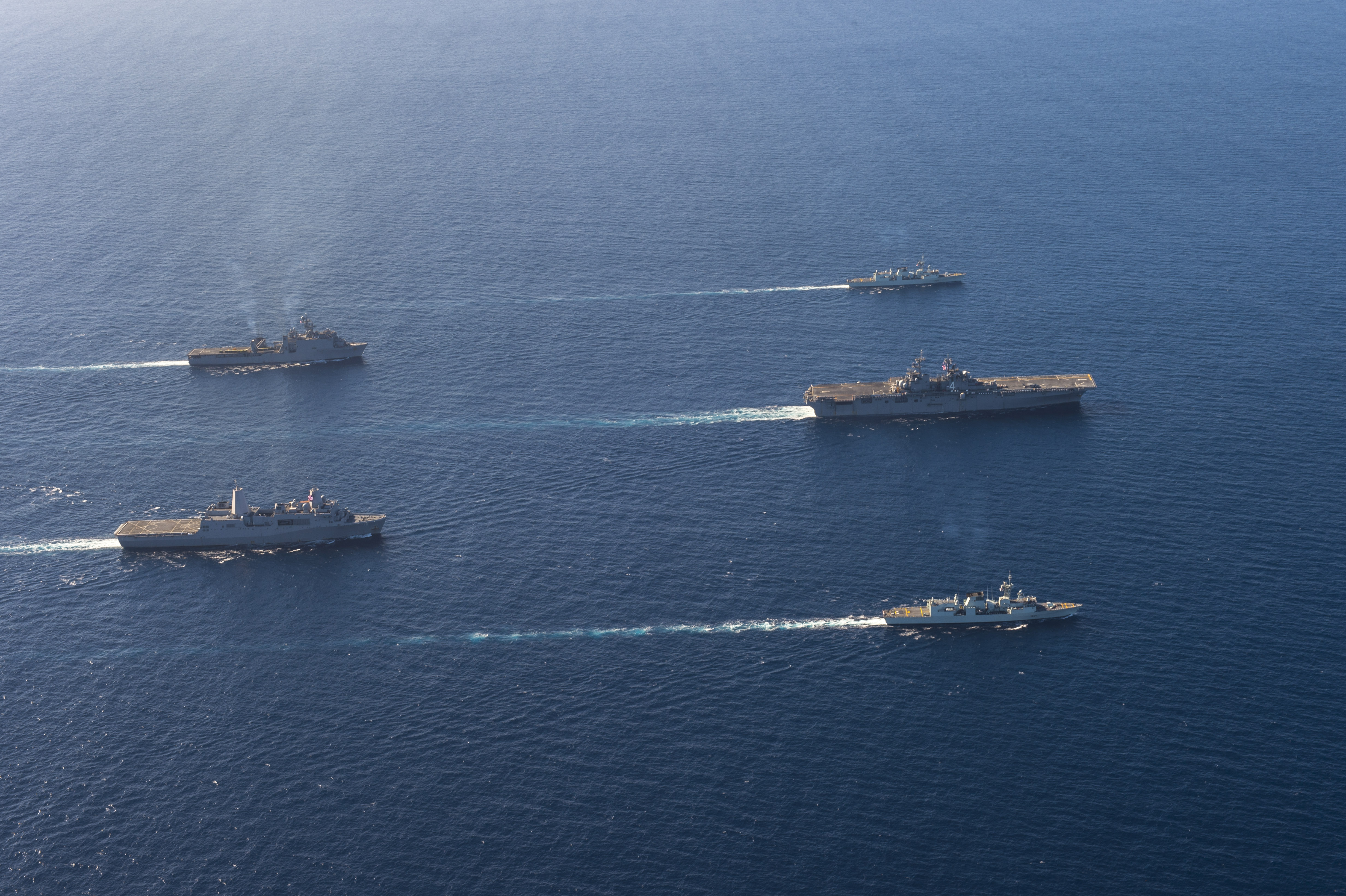 Owens said that, as the military continues a rebalance to the Pacific region, having more ships – and amphibious warships in particular – in the region will be important.

“Numbers matter. We talk a lot about presence, but what our new [chief of naval operations] talks a lot about is posture. That’s presence plus our ability to surge,” Owens said.
“Going back to numbers, we are meeting our requirements, but just barely. With our requirement to get to 38 amphibious warships, what that provides not only is a two-brigade lift for the Marine Corps, but on a regular basis it gives us a bench. It gives us a surge capability that right now we lack.”

The Marines have 30 amphibs today, including America, which has not yet made its maiden deployment, as well as ships in varying stages of maintenance.

“So going ahead in the near-term, over the next three years we get three new ships – an LPD in ’16, the Murtha; an LPD in ’17, the Portland; and then in 2018 we get the Tripoli, our next LHA – with no corresponding decommissioned ships, so we actually grow the fleet from 30 up to 33 ships,” Owens continued.
“That’s a big step for us, and that will give us a little bit of surge capability and flexibility. And especially as we look to the Pacific region, we’ll put it to good use.”

Owens said the three additional ships will primarily support additional operations in the Pacific, which is home to five treaty allies and many geographically widespread partners looking to boost their amphibious capabilities.

“But it also gives us the ability to send out single-ship deployers for partnership station-type missions that we used to do routinely but have been more challenged to do more recently,” he said.

“And then the other thing it does is it allows us to do additional training for the sailors and for the embarked Marines,” he continued.
“Two particular capabilities come to mind: flight deck operations, train not only the aviators so they can get aboard safely and operate efficiently from the ships, but also the sailors on the flight deck themselves so they get used to handling aircraft. And then well deck operations too. … We have met our bare minimum training requirements, but what it means is that we end up doing some of the basic level training during the workups when, ideally, not only you would have that complete for the sailors and Marines before you start the workups so you can get to the higher level of capability, but also so that you can train more of your force – and now I’m speaking for the Marines primarily – so that you have Marines that are ready to join up as part of that surge force if we’re required to respond to a crisis.”

Owens said having 33 ships is a good start, but the Marine Corps is serious about getting to 38 – though even that wouldn’t be enough to meet all combatant commander requirements for Marines. The service is getting creative with how to get Marines around on alternate platforms, such as the new Expeditionary Mobile Base (formerly called the Afloat Forward Staging Base) and logistics ships such as the T-AKE dry cargo ship.

Though these ships will never replace warships, Owens hopes that he can, “on an as-needed basis, put Marines on, go somewhere where they’re needed, whether it be for an exercise, a partnership-building opportunity, or disaster relief/humanitarian assistance-type operations. And perform from that ship when we don’t have amphibious ships available.”

Marines in the Pacific are experimenting with alternative platforms now to put procedures in place in case an emergency arises and a Military Sealift Command-owned ship needs to ferry Marines to a disaster.

“We are finding ways and developing sets of procedures, because there is an integration required – the ships are civilian-crewed for the most part, and we’ve had great success working with them, but it is different. Both the crews and the embarked force, whether it be Marines or special operators, need to understand that and figure out how to work together,” he said.

The Navy and Marine Corps also have an Alternative Platforms and Payloads Council to help vet ideas for supplementing Navy warships, and Owens said the council’s attention is focused on the Special Purpose Marine Air-Ground Task Force Crisis Response unit for U.S. Africa Command and the Marine Rotational Force in Darwin, Australia. The two units are very different, he said, “so by focusing on both we can come up with a menu of options, if you will, that we can apply to other scenarios as well.”

Owens said that, with so much change beginning to take place, the first four months at N95 have been exciting.