The global coalition to counter the Islamic State in Iraq and Syria (ISIS) is making progress in its five-pronged approach to defeat the organization, sometimes called Daesh.

The threat too is expanding, he noted, with ISIS now vetting international terrorist groups and others that want to partner with it – and developing what Allen called “overseas provinces” to expand the caliphate’s influence across the globe.

Allen, who is 13 months into his job as special envoy, said that “while its often the coalition’s kinetic actions that receive the most attention, it’s the aggregate effect of the coalition’s activities across multiple lines of effort that will determine the coalition’s success.”

To that end, he outlined five lines of effort for the coalition: the military components, which is to deny ISIS a safe haven and provide security assistance to local partners combating ISIS; to stabilize regions and provide humanitarian relief once ISIS is kicked out; to disrupt the group’s access to financial resources; to counter ISIS’s information warfare efforts to recruit support; and to stem the flow of foreign fighters into the area.

Allen did not dwell on the military aspect of the war against ISIS but rather expressed his concern about cutting the group off from its financial and human resources.

Asked what additional military resources the coalition might need to achieve its goals, Allen said the coalition’s effort is “more than a 2,000-pounder coming off an F-18.” 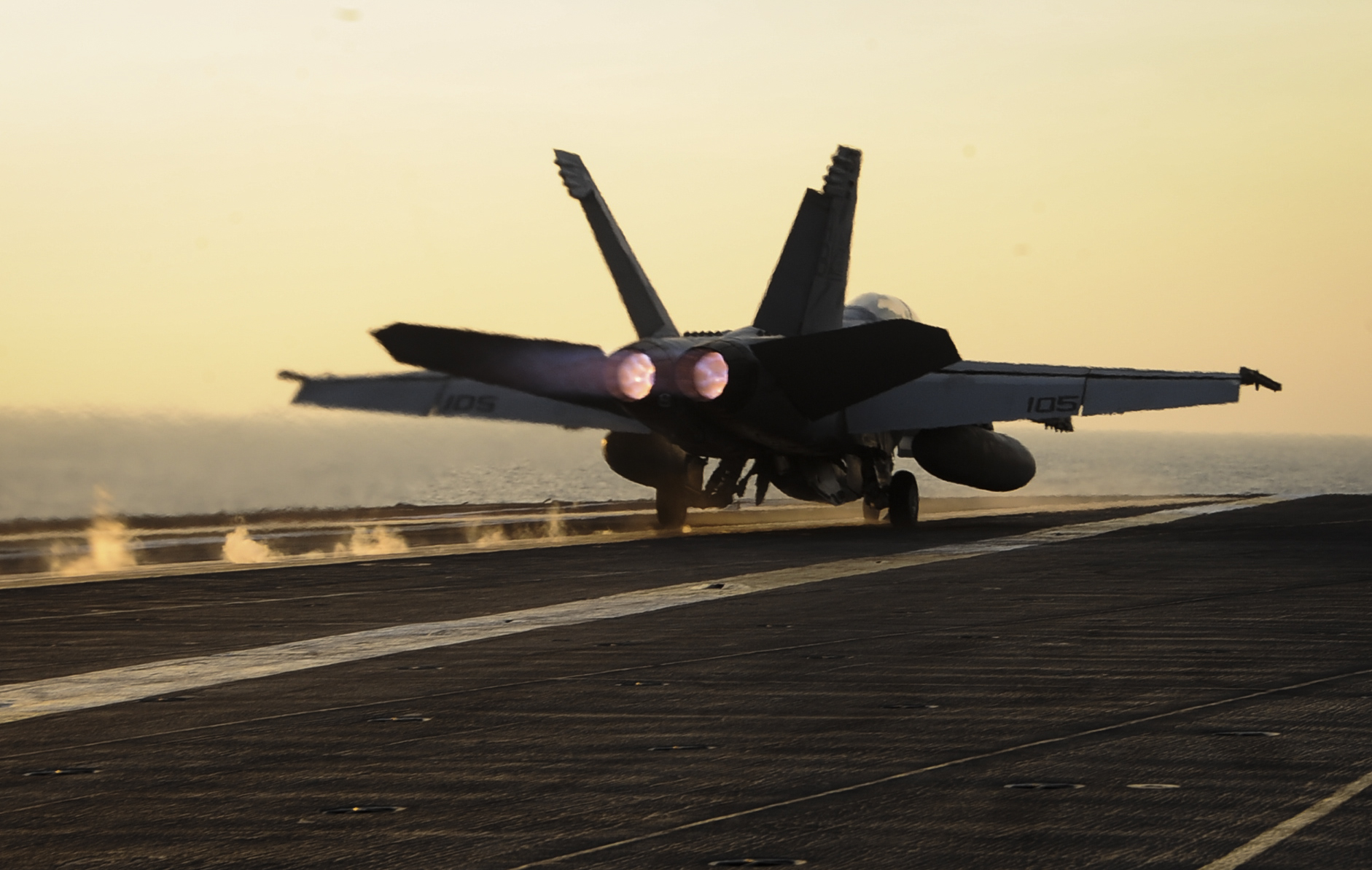 An F/A-18F Super Hornet assigned to the Red Rippers of Strike Fighter Squadron (VFA) 11 launches from the flight deck of the aircraft carrier USS Theodore Roosevelt (CVN 71) on Oct. 10, 2015, in support of operations against the Islamic State of Iraq and Syria. US Navy photo.

He did note that ISIS had lost 30 percent of the territory it held this time last year and has been blocked from all but 68 miles of the Syrian-Turkish border.

Once liberated, the formerly ISIS-controlled areas need to be stabilized so former residents can return.

“The Germans and the Emiratis are helping organize contributions from more than 20 coalition partners to provide stabilization support,” he said.
“The Italians are leading an effort to train effective Iraqi police, and the Canadians have stepped forward to ensure protections and programs that will support women and girls as they are liberated within these populations.”

The United States is also helping organize a stabilization fund through the United Nationsl to get water and electricity flowing, provide medical care and more to regions freed from ISIS.

“Liberating areas from Daesh will never be enough,” Allen said.
“It isn’t just about defeating Daesh as an organization, it’s about recovering the population that was ultimately subjugated. That constitutes the defeat of Daesh.”

Allen spoke at length about disrupting ISIS’s economic network. In May, a U.S. Special Operations Forces raid of an ISIS leader led to the recovery of seven terrabytes of data, outlining how the organization operates, provides logistics, taxes those it subjugates, interacts with foreign financial institutions and more. Allen said the coalition is still working to operationalize some of that information, but the U.S. State and Justice departments have identified 25 key leaders and facilitators and frozen their assets. Anyone found doing business with these ISIS supporters can face punishment for doing so, Allen said.

To counter ISIS’s recruitment efforts, the coalition set up a counter-messaging center in Abu Dhabi, which analyzes social media engagements and attempts to engage those that ISIS also engages. Allen said the coalition would set up additional centers in Europe, North America and Southeast Asia.

For those who still choose to travel to Iraq and Syria to join the fight, the coalition is working to close the remaining 68 miles of Syrian border, and is working with partner nations to stop foreign fighters earlier in their journeys, before they reach the now-closed Syrian crossing points.

Since last year, 22 countries have implemented new laws to criminalize travel to join ISIS, Allen said, and 34 countries have arrested individuals headed for the region. The United States also developed intelligence-sharing agreements with more than 40 countries to help stop potential fighters early on.

Still, the current fight against ISIS is just one, even if the biggest, fight against radicalism. Allen said ISIS didn’t pop up in a vacuum but rather is a symptom of larger social problems around the globe.

“Where there is weak governance, where there is no hope for large segments of the population, where the prospects for a future are dim, it is a location on the globe and it is a segment of the population that is ripe for radicalization,” he said, adding that many ISIS fighters are tied to fighters who flocked to Afghanistan in the 1980s to fight the Soviets, and that many trained in today’s fight against ISIS may be involved in a future fight decades from now if the underlying problems cannot be addressed.

To that end, Allen said that rehabilitation of radicalized fighters is vitally important. Singapore has led the way in rehabilitating those it arrests rather than keeping them in jail cells to dwell on their anger and share ideas with other prisoners. Converted former-fighters, as well as the mothers of foreign fighters, have been important voices in the counter-ISIS messaging campaign, he added. 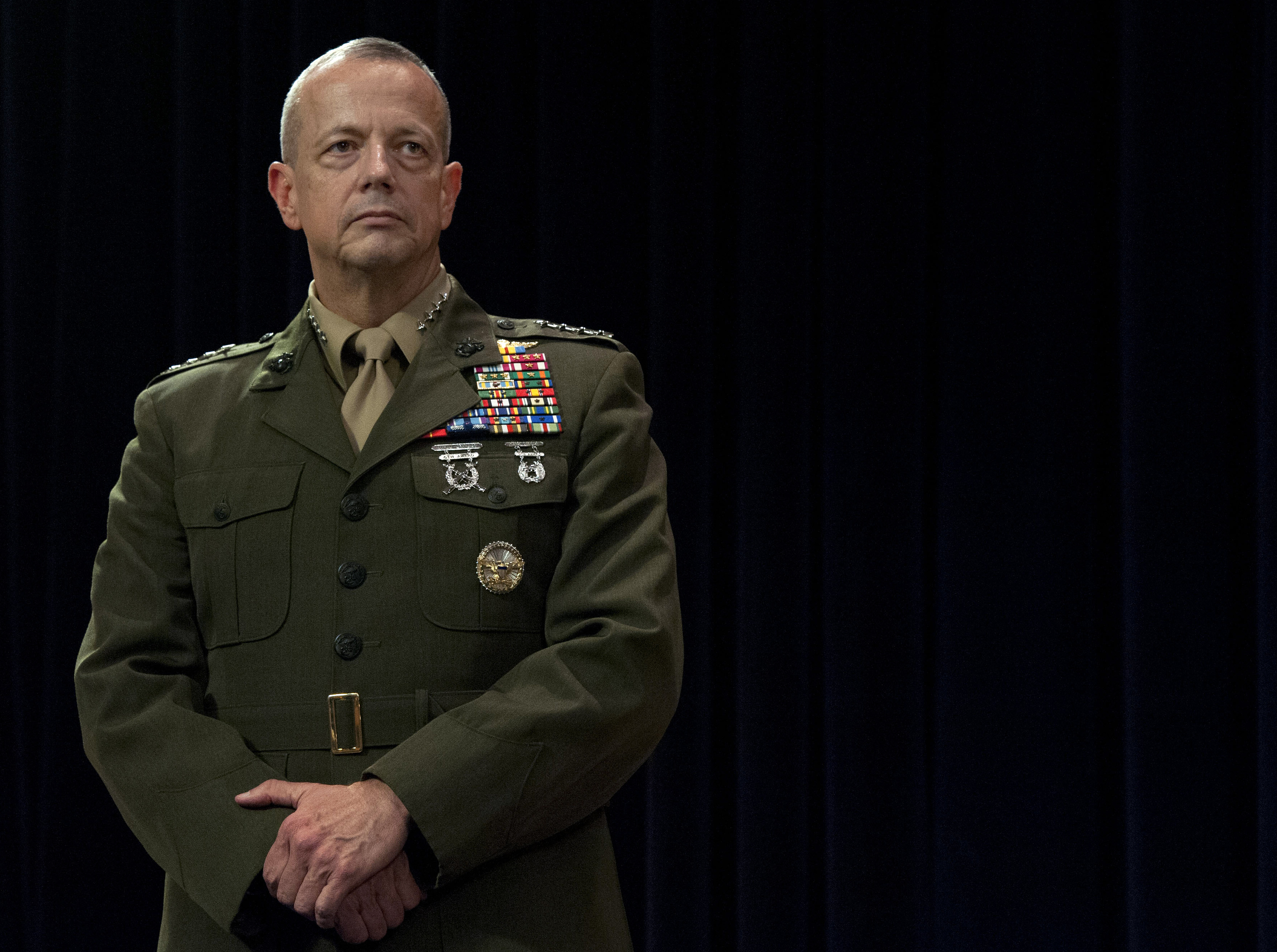 Allen made clear that the objectives of the coalition are long-term, as are the challenges they face. He vowed to stay the course, regardless of what situations arise – such as recent intervention by Russia.

“We’re going to continue to go after Daesh. Russia’s intervention is not going to divert us at all from our strategic objectives with regards to Daesh,” he said.
“This is not a contest between the United States and Russia. It’s in our interest for Russia to be a responsible and effective player on the international stage. Our battle remains and will continue to remain the defeat of Daesh, and our battle along with the entire international community is to resolve the conflict in Syria in a way that can end the bloodshed and the human misery and the humanitarian crisis which has created the largest refugee flow and humanitarian crisis since World War II.”

That said, Allen called Russia’s moves dangerous and likely to make Russia vulnerable to backlash from extremists. Intervention to prop up a violent dictator will only “assist in the further recruitment of those foreign fighters who would want to come to Syria to oppose now the Russian intervention, and this wasn’t helped, by the way, when the Russian Orthodox church recently issued a declaration that Russia’s involvement in Syria is a, quote, holy battle.”

Still, Allen said he would work with Russia if the country were willing to work towards a political end to the civil war that included a transition away from Bashar al-Assad and the inclusion of moderate opposition groups.

“Russia has failed to join that coalition of 65 nations in an attempt to end this conflict. … The only way forward in Syria is a political transition away from Assad. Nobody pretends this is going to be easy but we believe it is still possible, we’re going to keep our lines of communication open to that extent,” he said.
“It is not clear yet whether the Russian role can contribute to facilitate a political transition in Syria, or in the end stabilize a murderous regime and dictator. If it is the former, there is the potential for cooperation. But if it is the latter, it’s difficult to envisage a near-term political outcome that could end the violence and place Syria on a path towards humanitarian, economic, social and political recovery.”

During his presentation Allen did not address late September reports he would be shortly stepping down from his position.