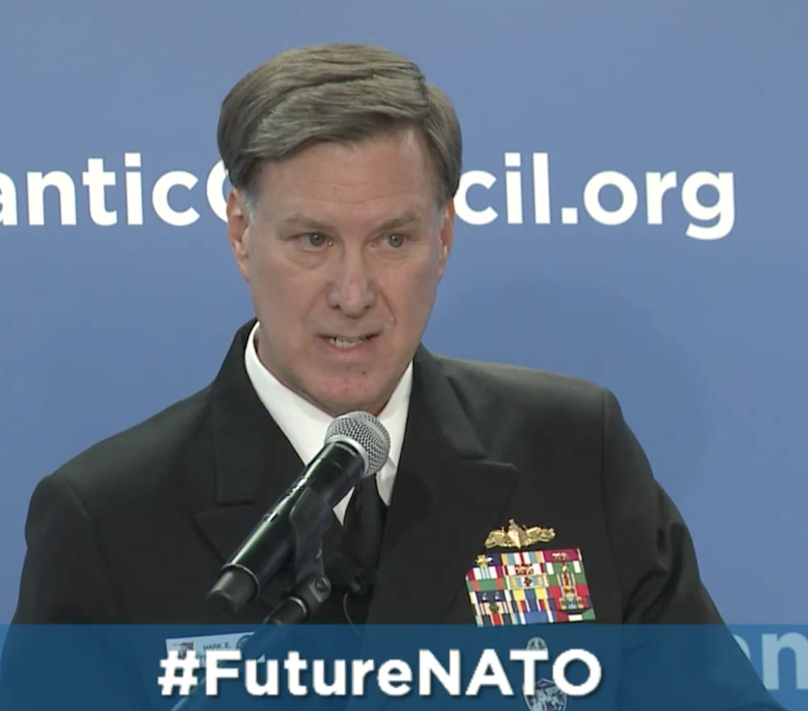 Russia has found ways to slow NATO military responses while simultaneously quickening its own ability to mobilize, the commander of U.S. naval forces in Europe and Africa said, and NATO needs to find ways to adapt.

Adm. Mark Ferguson, who also commands the Allied Joint Force Command in Naples, Italy, said at the Atlantic Council on Tuesday that Russia has not only expanded its presence – in the Atlantic Ocean, the Arctic, the Baltic Sea, the Black Sea and now in the Mediterranean Sea – but has deployed more sophisticated weaponry and has introduced an element of hybrid warfare that keeps NATO unsure of how to respond.

“The language coming from the Russian military reflects the mindset and actions characteristic of direct challenge and confrontation with NATO. What makes this approach troubling is hybrid warfare coupled with the ever-present threat of the full application of robust conventional and nuclear forces,” Ferguson said.
“Russia has also introduced new capabilities, such as newer and more stealthy nuclear-powered attack and ballistic missile defense submarines. They are also expanding the reach of their conventional submarines with advanced cruise missiles. Just last month the first Caliber [cruise missile]-equipped Kilo-class submarine transited from the North Sea to the Black Sea, the first of six, bringing within its range the eastern half of Europe.”

What makes the military buildup tricky for NATO is that Russia has also leveraged space and cyber and waded into information and hybrid warfare that is “designed to cripple the decision-making cycle of the alliance. Their capabilities have focused on the creation of ambiguity.”

“On land, Russia exploits ethnic and religious divisions, makes use of an aggressive information campaign, and extensively uses misinformation and deception to delegitimize the forces under attack while confusing the attribution of their actions,” Ferguson said, adding that the Russian Navy has also attempted to disrupt decision-cycles at sea.

At the same time, “to execute swiftly, they are also centralizing their national and military decision-making. We are seeing more frequent snap exercises focused on rapid mobilization and movement directed by central headquarters, to include their naval forces, where we have seen large numbers of ships get underway with little or no notice.”

The end result, he said, is that conditions change faster than NATO’s chain of command can keep up with, with alliance leaders hesitant to stake out a course of action in the midst of so much uncertainty.

During a question and answer session, Ferguson said that NATO has taken some steps to quicken its response time, such as creating a Very High Readiness Joint Task Force and forward stationing some equipment. However, he said the Supreme Allied Commander of Europe and the NATO North Atlantic Council would need to find ways to more rapidly give authorities and permission to respond to crises. Ferguson said Russia has proven several times how quickly it can surprise NATO allies with action, and NATO needs to be more responsive and be able to have the mechanisms to make the decisions quicker” – which in part will require greater situational awareness on the ground.

Additionally, “We may have to think differently about how we set up our command structures in response to speed and surprise,” he said later at the event.

Ferguson said in his presentation that NATO needed to further adapt in several ways. First, alliance members should invest in training at the high end of the warfare scale. Naval forces should be on-call for real-world events, to reduce mobilization time, and those forces need to invest in new technologies to keep up with Russian investment.

He noted that budgets are tight across Europe, but that to upgrade the allies’ militaries with equipment resistant to space and cyber warfare, “in this era of fiscal limits, allies should pool resources and form consortiums to purchase or lease the capabilities the U.S. may possess.”

Ferguson also noted that European forces are struggling to maintain current force levels, let alone grow them. The size of allied navies needs to at least stay steady, and those navies must participate in more live-fire exercises such as the upcoming Trident Juncture and the annual Baltic Operations (BALTOPS) exercise that took place in June.

Ferguson also said in response to a question that he has held meetings with Russian Navy officials to discuss incidents between the United States and Russia, which he described as professional. He said that ship-to-ship interactions between U.S. and Russian forces have also remained professional and responsible but that “we have seen more aggressive behavior from the air forces and aircraft overflights.”