MARINE CORPS BASE QUANITCO — The head of Marine Corps combat development rolled out a new plan that links the service’s most recent operating concept to requirements for new systems to fill expected warfighting gaps.

After having spent two years on the Chief of Naval Operations’ staff before coming to his current job, Walsh said he wanted to bring a Navy-like deliberative process to the Marine Corps to connect the requirements, acquisition and budget staffs.

MCCDC and the Marine Corps Warfighting Lab (MCWL) will conduct a yearly refresh to the service’s operating concept, Expeditionary Force 21, once Neller releases his updated CPG and Marine Corps Strategy.

Once the updated EF21 document is released, Walsh has created a process to link the big-picture concept to specific warfighting needs and solutions derived from data and experimentation.

First, Marines will generate warfighting challenges that apply across the force: how do Marines develop and maintain situational awareness? How can the service push precision fires to lower levels of the Marine Corps? Walsh also mentioned enhanced training, conducting combined arms maneuver, conducting entry operations, and maintaining communications in various space, cyber and electromagnetic environments as other warfighting challenges that he’s discussed so far. 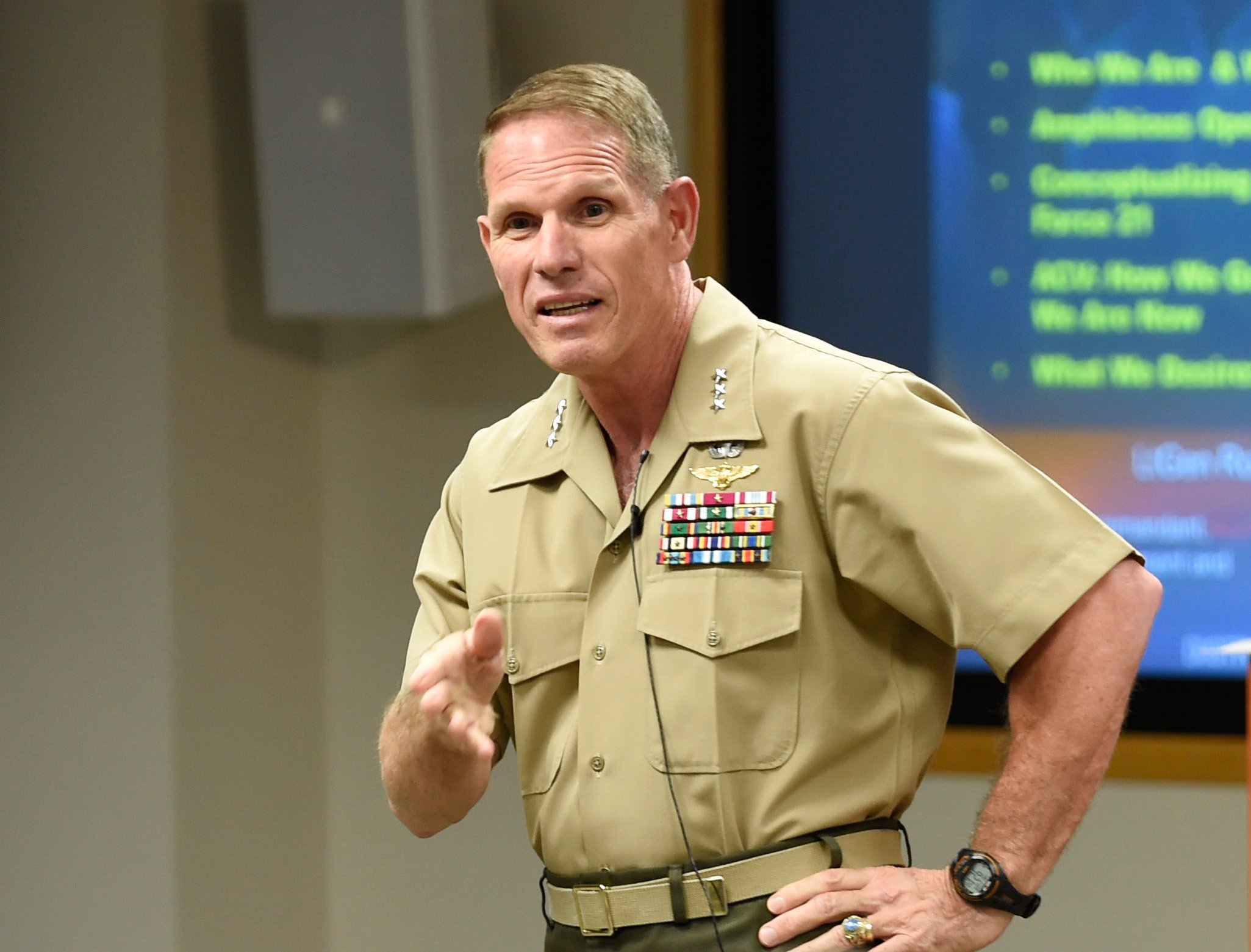 MCWL will choose as many as 10 to 20 warfighting challenges to start with in its first year and will assign each challenge a team lead – though Walsh told USNI News after the presentation that he’s still exploring from which community in the Marine Corps he should assign team leads. The team leads will first come up with a problem statement: what capabilities are needed and why, in the context of the current threat, the Marines’ mission sets, available technology, and historical lessons learned. For example, at what level does the Marine Corps need to push precision fires – the company level, the fire team level – and what capabilities are needed to do that?

Team leads will develop a running estimate, which defines where the service is at today compared to what the Commandant’s Planning Guidance, the Marine Corps Strategy and EF21 call for. They will then write a series of learning demands, or questions they should ask to understand how to get to that desired state of operations.

“The innovative part is then trying to pull this all together in an integrated learning and analysis plan,” Walsh said, adding that the Marine Corps has the capability to throw wargames, experiments, seminars, its Training and Education Command and more – many collocated at Marine Corps Base Quantico – at these warfighting challenges.

Walsh suggested that the Marine Corps should do more with fielding interim solutions to help gather data and user feedback, much the way the Navy took a soon-to-be-decommissioned amphibious ship and turned it into an interim afloat forward staging base, and then used that platform to field the first Laser Weapon System.

“We’ve got to push things out there faster, we’ve got to be willing to take them out there, get them out to the fleet, experiment with them, play with them, prototype them, break them, let [Marines] work with it, and if it fails it fails,” he said.

With data in hand from experiments, team leads would report their findings and recommendations to him in quarterly Futures Review meetings, with a few warfighting challenges addressed in each quarterly meeting. Senior leadership would be briefed after those review meetings, and the commandant would be briefed once or twice a year, to ensure the bottom-up solutions to warfighting challenges match up with the top-down Marine Corps Strategy and EF21 concept.

At the end of this lengthy process is what really excites Walsh: a “concepts-based requirements system.” 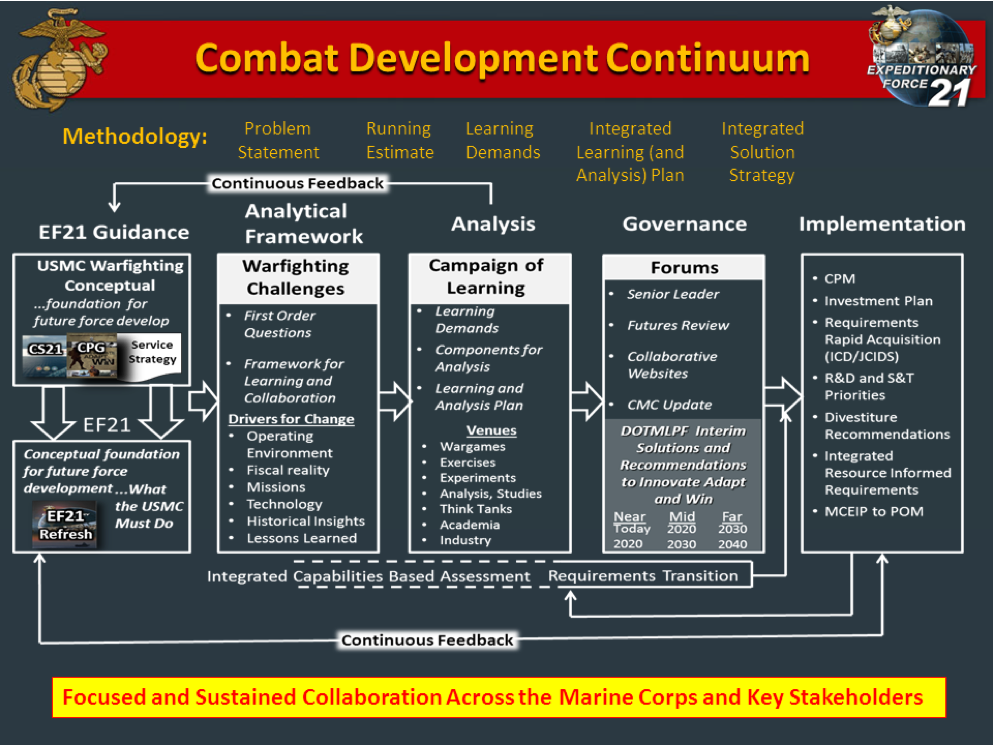 MCCDC will have taken the big-picture strategy and turned it into specific plans of action that will include procuring new materiel needed to implement the Marine Corps Strategy and EF21. Requirements for those new systems will be turned over to Brig. Gen. (Sel). Roger Turner, director of the Capabilities Development Directorate at MCCDC, and “what you’re trying to tee up for Roger is a much better start in the capabilities process.”

The CDD will have a clear understanding of what the Marine Corps needs and why, and it will be able to, with data to support it, compare requirements to available money and send “a resource-informed Marine Corps Enterprise Investment Plan” to the budget-planners.

Walsh said that previously the Marine Corps requirements staff could only send a “rack and stack wish list” for budget considerations. While serving as a Navy resource sponsor, his staff had to balance their requirements with available funds before forwarding their recommendations to the budgets, and Walsh said he hopes to bring that same process to the Marine Corps.

Walsh said he was pleased with the new process, which would repeat each year with new warfighting challenges and would allow the service to quickly tackle any new priorities from future commandants, breaking their high-level goals into actionable problems to solve.

He also added that the process relies heavily on the experimentation community, which Neller has said he would like to further support, so “there are some things we’re looking at with the commandant to get more experimentation by reorganizing.”

To complement the Marine Operational Test & Evaluation Squadron (VMX) 22, Walsh said the Marines are seeking an experimental ground combat unit. They have not decided yet, however, if there would be a dedicated experimental battalion like the Army has, or if the battalion that most recently returned from deployment would be looped into planned experiments.

Though the details are still being worked out, Walsh said that in early meetings with Neller “he spent an awful lot of time talking about the importance of innovation and developing combat capabilities.”