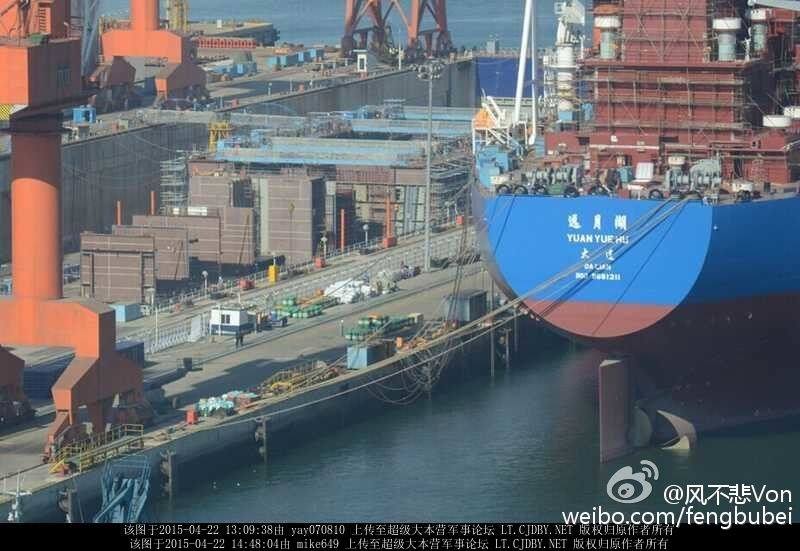 An April image of a ship that is almost certainly China’s first domestic aircraft carrier at the Dalian shipyard in northern China obtained on the Chinese language Internet.

Several sources confirmed to USNI News that an unknown shipbuilding project — first noticed publically by Jane’s in late February — is almost without a doubt the bones of the PLAN’s first domestically-built carrier.

Sources pointed USNI News to an April photograph that emerged on the Chinese language Internet of a ship under construction at the Dalian yard believed to be the super structure of the PLAN’s second carrier.

Further late September satellite photographs published by Jane’s last week show a ship that corresponds to the dimensions of the refurbished Kuznetsov-class aircraft carrier Liaoning — a ship with a beam of about 115 feet and a length of 886 feet.

Jane’s stopped short of a definitive determination that the mystery ship at Dalian was a new carrier — the Type 001A — but did compare the construction methodology of the ship to Soviet-era builds on the original Kuznetsov in the 1980s.

The interest to what is in the Dalian dry dock — once the home for Liaoning’s refit after China purchased the carrier — has been a hot topic of conversation for international naval watchers.

“We’re talking eight months from March when they say the initial sections began going up,” he said on Wednesday.
“If it was commercial ship it would be done already.”

Carlson said the Jane’s photographs indicate the ship is being built without a well deck which would likely rule out a big deck amphibious warship.

“The logical explanation is that it’s a carrier,” he said.

China’s intent to start its own domestic carrier program has been hinted at in official documents and scattered state-controlled press reports but the central government and the PLAN have been far from explicit in expressing a complete carrier vision.

If the construction of the first domestic carrier has commenced it confirms the rough outline naval analysts have constructed around the effort.

“For the past several years, analysts have believed that China plans for a force of around four full-sized aircraft carriers — including the active Liaoning,” Eric Wertheim author of U.S. Naval Institute’s Combat Fleets of the World told USNI News on Wednesday..
“If the hull now under construction does in fact turn out to be a new Chinese aircraft carrier being built at Dalian shipyard, it confirms the PLAN’s commitment to carrier based naval aviation and illustrates their growing desire for more power projection capabilities.”

The first public inkling China was set on creating a a domestically-built carrier fleet emerged about five years ago as a minor footnote to a voluminous 2010 Ocean Development Report.

In early 2014 a hastily deleted report in Chinese state-controlled media quoted a regional official saying the PLAN had their sights set on four carriers.

Four carriers would mimic the U.S. legacy deployment model for carriers —one carrier deployed for three in training or maintenance. It wouldn’t be the first time China has operated like the U.S. The PLAN has borrowed several other carrier tropes from the West down to dressing Liaoning’s flight deck sailors in the same corresponding bright colors as the U.S. Navy.

While the ship in the Dalian dry dock is — with infinitesimal doubt — the Type 001A domestic carrier, several questions remain as to what features the new carrier will bring.

Liaoning has been an effective tool for Chinese blue-water navy aspirational messaging but it’s less effective as an actual warship. The combination of the skip-jump configuration of the carrier’s flight deck and the reportedly underpowered engines of the Shenyang J-15 Flying Shark fighter have led to assumptions that the J-15s would only be able to launch from Liaoning with a limited lethal payload — if any weapons at all.

China would be able to mitigate some of the J-15 weight issues with a catapult- assisted take-off but arrested recovery (CATOBAR) system on its future carriers, however its unclear is China has the technical wherewithal to include the scheme on its ships or if the Kuznetsov design could be modified to accommodate a CATOBAR system.