MARINE CORPS BASE QUANTICO — The U.S. Marine Corps is in the midst of several acquisition programs that will extend the reach of the force and keep Marines safer while on the ground however the Corps is struggling how to fit the new kit on the Navy’s existing amphibious ships.

The Navy’s fleet of amphibious warships were designed decades ahead of the hard lessons of improvised explosive devices (IED) that wreaked havoc on U.S. ground forces in Iraq and Afghanistan and the rapid growth in the weight of new and better protected vehicles are pushing the margins of what the current crop of amphibs can transport.

“There’s a lot of great equipment out there but if the amphibious fleet, the seabase has to carry by weight by cargo foot some of the assets that we see available or in the future, will the seabase have that type of room?,” asked Maj. Gen. Michael Regner to a panel at the Modern Day Marine exposition on Wednesday.

Before Sept. 11, 2001, an amphibious ship averaged about a 70 percent utilization rate for stowage in its hold with a sizable margin for growth, Marine Corps Seabasing Integration Division director Jim Strock said at a panel at the Modern Day Marine exposition on Wednesday.

“Today — and we’ve analyzed new load outs since 2009 — that growth and stow [margin] is down to .62-.63 [percent],” Strock said.
“We’ve had a ten percent loss in in utilization rate on existing amphibious ships and deck space because our equipment is bigger. Its heavier and most importantly, it’s higher.”

Inside an amphibious warship there are internal ramps in which crew use to maneuver vehicles and some more recent vehicles — like Mine Resistant Ambush Protected (MRAP) trucks — have had problems moving through out the ship. 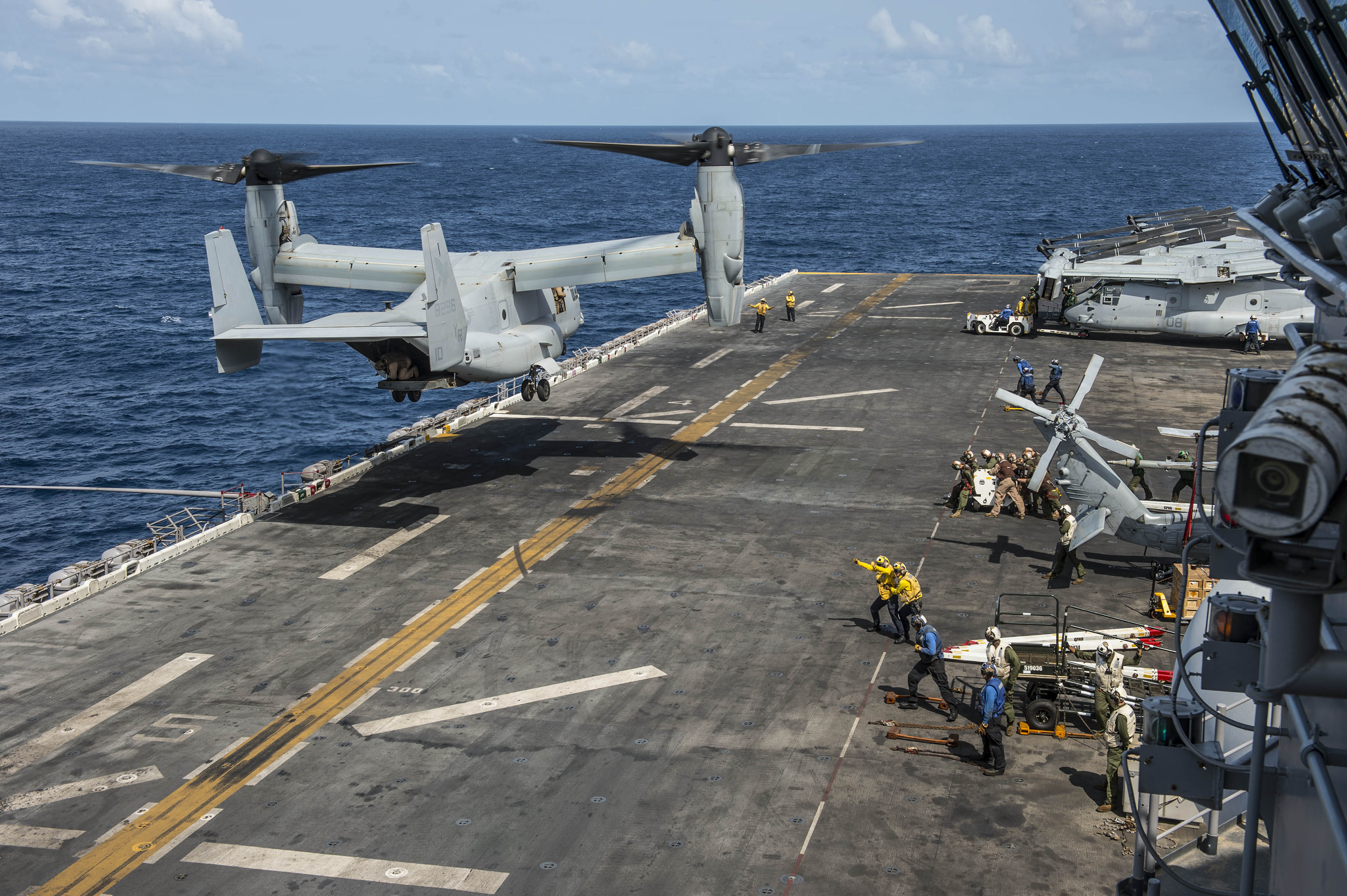 A MV-22B Osprey from the Greyhawks of Marine Medium-lift Tiltrotor Squadron 161 (Reinforced) lands on the flight deck of the Wasp-class amphibious assault ship USS Essex (LHD-2) in 2015. US Navy Photo

Keeping heavier vehicles higher in the ship can lead to a host of problems in safely operating a ship.

“If you have a vehicle that’s too high because it needs ground clearance means you have to stow it higher in the ship you begin to impact the meta center of the ship and you run into trim and stability issues you run into center of gravity locations you run into displacement issues.” Strock said.
“I’m a ship handler, I got qualified years ago, and it gets a little dicey when you’re driving top heavy in the water.”

The problem is not only ground vehicles but also new and heavier aircraft to be fielded by the Navy’s Wasp-class amphibious ships (LHD-1).

“The LHDs were designed for the CH-46 on the flight deck, [now] they’re carrying the V-22. They’re designed for Harriers, they’re going to carry the [Joint Strike Fighter], huge differences in weight in the top of the ship,” he said.

The next looming challenge for Marines and the Navy is incorporating the pending fleet of 5,500 Joint Tactical Light Vehicle (JLTV) on the amphibious fleet.

The Oshkosh JLTV — selected by the Army and Marine Corps in late August — has almost three times the curb weight of the 5,500 pound HUMVEE that were used in the baseline designs for the San Antonio-class amphib (LPD-17).

Strock did recognize the need for the JLTV capability but “the challenge to industry is how to mitigate [weight issues]. The enemy now has a vote, we get that,” he said.
“It’s not who came first, the ship or the equipment, the issue is making sure those capabilities into the future are mutually supporting warfighting from the sea.”