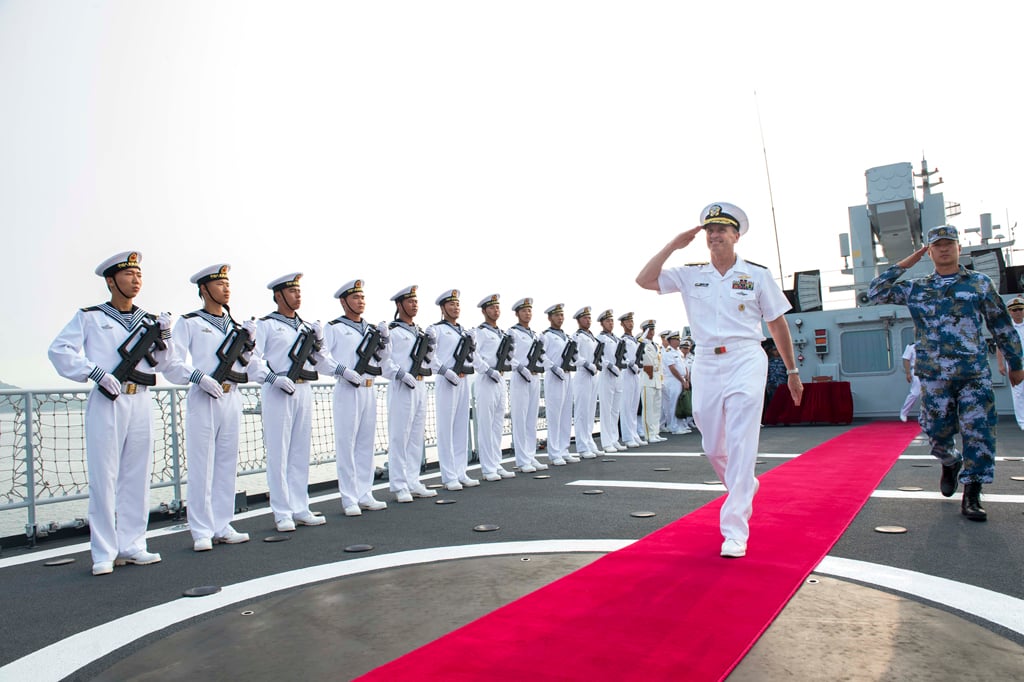 This post has been updated with a revised headline that better reflects the comments of Rear Adm. Jeff Harley.

LONDON— A two-star U.S. Navy admiral has played down fears that the Chinese government’s apparent determination to pursue its territorial claims in the South China Sea will lead inevitably to war.

Addressing a conference in London on Monday, he pointed out that the United States’ recently revamped tri-service maritime strategy has identified China’s military expansion as a “challenge and an opportunity” rather than a threat to US interests.

It was an opportunity “because there is enormous potential within their rising navy to provide the traditional benefits of sea power, such as maritime security”, Harley said.

“Regretfully, there’s also the challenge of a China that has some contrary Law of the Sea interpretations; nonetheless, I’m sure all nations expect that these issues can be resolved peacefully”.

Speaking at the First Sea Lord/Royal United Services Institute Sea Power Conference, ahead of the Defence and Security Equipment International (DSEI) expo which opens today, he added: “There are some who worry that a monsoon may sweep over us all. There is also a fear … that rising powers in the presence of a superpower will inevitably lead to conflict. My great nation does not see it that way at all. There is room in the maritime realm for multiple powers, really all powers.”

However, a senior Japanese naval officer told delegates that Beijing’s territorial disputes with Vietnam and the Philippines posed a “tremendous risk” to commercial traffic in the South China Sea.

Vice Adm. Umio Otsuka, President of the Japan Maritime Self Defense Force’s Command and Staff College, warned that encounters between naval units and fishing fleets employed as ‘maritime militias’ could lead to armed conflict. He also queried the legality of China’s land reclamation and military construction efforts in disputed waters.

“Credible naval power has prevented [these] challenges from crossing the line”, Otsuka said.

Instead of a NATO-like framework to guarantee security, a hub-and-spokes system of bilateral alliances with the US at its center “has played the role of deterrence and stabilization” in the region, he said.

“Given the problems which are caused by a state actor, credible deterrence is becoming more important to frustrate [that] nation’s attempt to change the status quo by force.”

China’s representative at the conference, Vice Admiral Yuan Yubai, who commands the PLAN’s North Sea Fleet, stated that his country had ancient historical claims to the South China Sea and was now consulting with neighboring countries in order to pursue “peaceful utilization and joint development” of the area.

“I’m firmly convinced that with the wisdom of countries surrounding the South China Sea, that disputes can be solved”, Yuan said.
“China and the US are in the process of coordinating with each other for the conduct of unexpected encounters in the air. After this code of conduct is passed, all the neighboring countries will have good communication with each other whenever an unexpected encounter occurs.

“I’m firmly convinced that the problems along the South China Sea can be successfully solved with the joint efforts and consultation. All problems can be solved if countries adopt policies of peace and security.”

He told the conference that China is seeking to establish a new Maritime Silk Road linking the country with India, Africa and Europe and the southwestern Pacific region, and that the PLAN would play a key supporting role in delivering “harmonious, inclusive and mutually beneficial” trade and cultural links to nations along the route.

As part of a strategic rebalancing towards the region, the US Navy expects to have 60 per cent of its forces based in the Pacific by 2020 while boosting the number of forward deployed ships from an average of 97 today to 120.