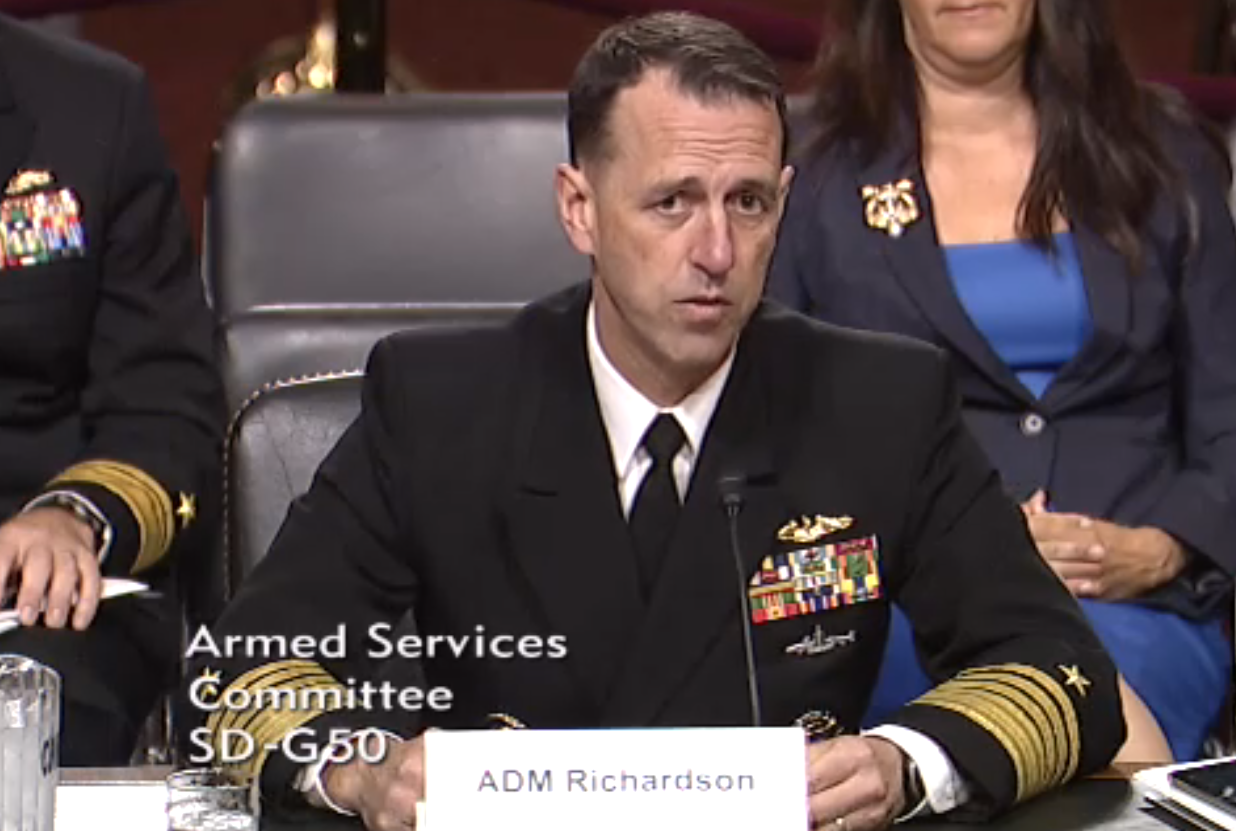 Adm. John Richardson during his July 30, 2015 nomination hearing for the position of Chief of Naval Operations.

The presumptive next head of the Navy called the billions in cost growth for the service’s next generation aircraft carrier program “unacceptable” during his Thursday nomination hearing before the Senate Armed Services Committee (SASC).

Adm. John Richardson, the current director of Naval Reactors and nominee to be the next Chief of Naval Operations (CNO), echoed the sentiments of SASC chair Sen. John McCain (R-Ariz.) on the more than 20 percent cost growth in the first-in-class Gerald R. Ford (CVN-78) and higher than estimated costs in the follow-on ships.

Naval Sea Systems Command PEO Carriers has said about 40 percent of the cost growth has been due to developmental delays in government furnished equipment (GFE) — including General Atomics’ Electromagnetic Aircraft Launch System (EMALS) and Advanced Arresting Gear (AAG) and well as Raytheon’s one-off Dual Band Radar for Ford — and 60 percent due to additional design work and construction performance.

McCain, a frequent and vocal critic of the Ford-class program’s cost growth, highlighted the ongoing carrier development his opening statement.

“This program continues to be plagued by technology immaturity, concurrent development and production and a lack of reliability test data for critical systems,” he said.
“This is unacceptable. I repeat, unacceptable, and I fully expect the Navy’s ongoing study of alternative aircraft carrier designs to provide real options.” 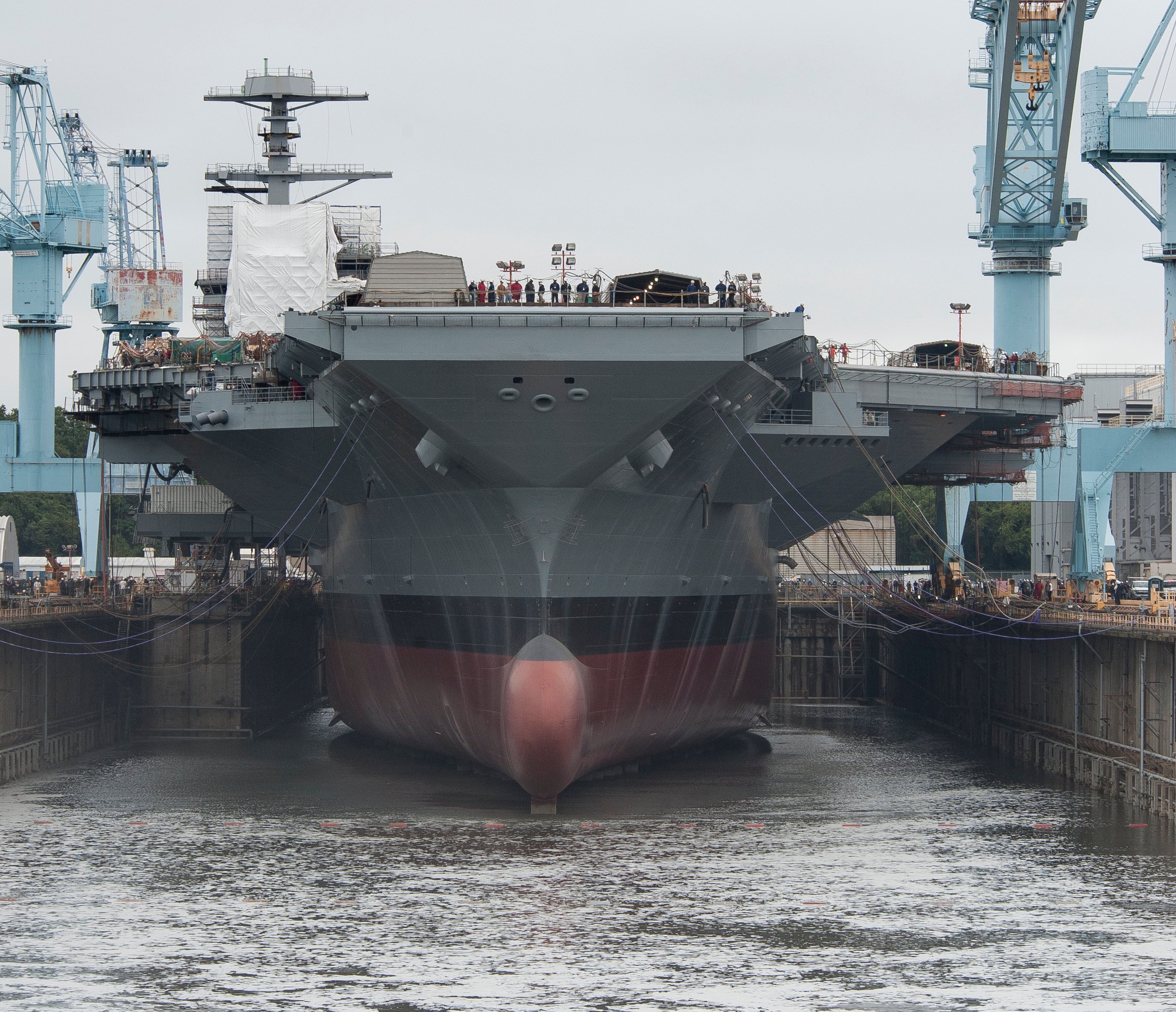 “I share your concern about the cost overruns of the carrier, and I agree with you that they are unacceptable,” he said.
“And if confirmed, I look forward to being very involved in the acquisition.”

McCain is championing a measure in the current defense bill that would give the CNO more authority in the carrier acquisition program.

First revealed during a hearing in March, the little advertised examination is said to take a hard look at alternatives to the U.S. nuclear carrier to project an equivalent amount of aviation assets.

“Is there a sweet spot, something different other than today’s 100,000 ton carrier that would make sense to provide the power projection that we need that we get today from our aircraft carriers but at the same time put us in a more affordable position to provide that capability?,” Sean Stackley — Assistant Secretary of the Navy for Research, Development & Acquisition (RDA) — said before a Senate panel in March.

Currently, the Navy has determined only Huntington Ingalls Industries’ Newport News shipyard the only facility capable of building nuclear carriers.

Richardson repeated the often heard call from the service to pay for the estimated $100 billion Ohio Replacement Program (ORP) from outside the service’s yearly $15 billion shipbuilding budget from a separately funded national strategic deterrence fund.

The largely congenial hearing also touched on damaging effects of sequestration cuts as a result of the Budget Control Act of 2011 had on the Navy. Richardson said the cuts weren’t effecting morale in the service but “there is a degree of unsettledness and uncertainty that arises from uncertainty in the fiscal environment.”

When asked by Sen. Joe Donnelly (D-Ind.) the standard what-keeps-you-up-at-night question, Richardson said it was the balance between a swiftly shifting security environment and budget uncertainty.

“Our nation is pulled in so many different directions — not only the Indo-Asia-Pacific, but also we mentioned Russia on their activity in Europe and — and certainly the activity in the Middle East,” he said.
“Contrasting to that is a — sequestration I think, is a symptom of sortable level of awareness that I look forward, if confirmed to enhancing, to make that the message more vivid, so that we can close the gap between the growing requirements to the security environment, and things like a sequestration with which would threaten the resources to address it.”