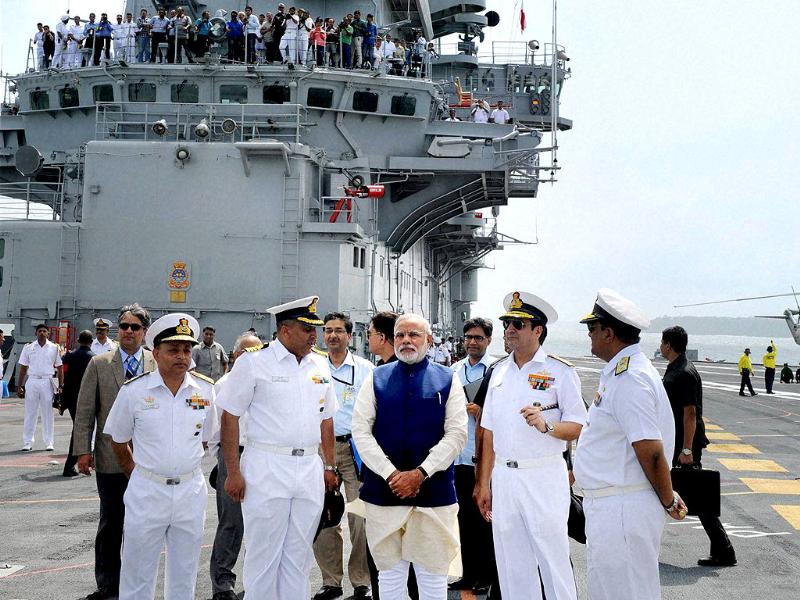 The Indian Navy has reached out to four international defense contractors — including a Russian and U.S. firm — for help with the design of its next domestic aircraft carrier.
The service sent letters of request (LoR) to U.K. firm BAE Systems, DCNS in France, Lockheed Martin and Russia’s Rosoboronexport on July 15, according to a report in Jane’s Navy International.

“According to the LoR, the IAC-2 is envisaged as a 300 m-long flattop vessel with a catapult- assisted take-off but arrested recovery (CATOBAR) capability that can embark around 35 fighters and 20 helicopters,” read the Jane’s report.
“The LoR also includes the option of the IAC-2 being fitted with General Atomics’ Electro Magnetic Aircraft Launched System (EMALS) that will equip the U.S. Navy’s (USN’s) Gerald Ford-class carrier, which is due to be commissioned in 2016.”

Design work on Vishal began this year with $5 million set aside for early design efforts.

The government of Indian Prime Minister Narendra Modi has moved to accelerate production of India’s carrier program in the last few years. India sough U.S. assistance for the IAC-2 program as a key component of the defense cooperation agreement India and the U.S. in January.

India’s desire to include a CATOBAR system will allow the Indian Navy more options for fixed-wing aircraft it can launch from Vishal than its current Mikoyan MiG-29Ks fighters.

Currently the Indian Navy has only used short-take off but arrested recovery (STOBAR)( a so-called ski-jump configuration) on its Soviet-built Vikramaditya and the domestically built Vikrant (IAC-I) which limits the size of aircraft that can be launched from a deck.

Though a CATOBAR would allow more aircraft options, it’s much more difficult to design, maintain and operate.

Additionally, the Indians are debating nuclear or conventional propulsion for the new carrier and asked the four companies for input, reported Jane’s.

To build Vishal, at its proposed 65,000-ton size, will require new infrastructure in India’s shipyards.

According to the Jane’s report,”none of the existing Indian shipyards is capable of building a 65,000 tonne warship without substantial expansion.”