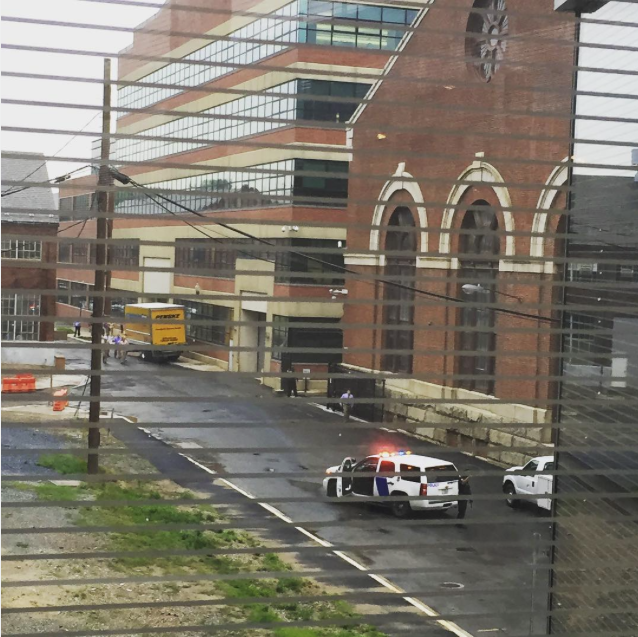 A view from a Navy Yard building on July 2, 2015 taken by Jolene Milot via Instagram

This breaking news post will be updated as new information becomes available.

There is no evidence there were shots fired at the Washington Navy Yard, and the FBI, the Washington Metropolitan Police Department and the Navy have given the all clear for the facility, according to the service.

Vice Adm. Dixon Smith, commander of Navy Installations Command, said during the press conference that Building 197, now named the Joshua Humphreys Building, was still in lockdown until a final walkthrough could be completed shortly. Though police had already gone through the building office by office and floor by floor, they wanted to ensure all spaces had been cleared before allowing employees back in, he said.

Metropolitan Police Department chief Kathy Lanier said she was confident after speaking to the woman who placed the emergency call that the incident was not a hoax. Rather, the employee called when she “heard what she thought may have been gunshots…which is what employees here are trained to do.” Lanier declined to say whether that employee had been in Building 197 during the September 2013 mass shooting.

Lanier added that the incident proved that law enforcement and Navy organizations had properly implemented lessons learned from the 2013 attack. Police officers were able to enter the yard’s access gates easily and had sufficient radio communication access once inside the building, which was not the case in 2013 and delayed officers’ ability to access the building and find the shooter. Lanier said she was in communication with NAVSEA commander Vice Adm. William Hilarides, as well as officials from the FBI, NCIS and more within 20 minutes of the emergency call.

Dixon said Navy Yard has conducted extensive training for active shooter scenarios since 2013, and he was pleased the employees followed that training this morning by sheltering in place and barricading their doors.

At one point, as police presence was winding down by the Washington Navy Yard gates, some officers moved down M Street to an office building occupied by several defense contractors, including Huntington Ingalls Industries and Lockheed Martin. USNI News understands that building was temporarily on lockdown as well.

Washington Navy Yard is home to NAVSEA, Naval Reactors and senior Navy and Marine Corps leadership. Employees tricked out of the NAVSEA headquarters as police cleared portions of the building, and it was unclear for most of the morning what threat, if any, there was in the building. A NAVSEA spokesman told USNI News there was an “unconfirmed incident” and no further details were available. The D.C. fire department eventually reported no injuries related to the incident, reported WUSA 9 News in 8:45 a.m. EST.

Building 197 – recently renamed the Joshua Humphreys Building in honor of the Navy’s first naval architect – underwent a 16-month renovation to repair the damage, make the building’s layout safer and to incorporate a memorial area on the first deck. Investigations afterwards made several safety recommendations, such as including police documents during personnel background checks and revisiting accountability on personnel fitness reports.