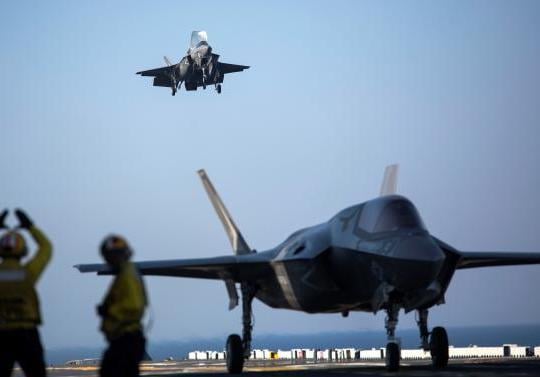 NORTH ISLAND NAVAL AIR STATION, Coronado, Calif. – The Navy’s top aviator checked out a simulator for its next-generation fighter jet, the F-35C Lightning II Joint Strike Fighter (JSF), on Monday and lauded its advanced capabilities that will give it a leg up compared to legacy strike aircraft.

A “game-changer,” said Vice Adm. Mike Shoemaker, commander of Naval Air Forces, is the ability for the F-35 Joint Strike Fighter to “suck in all that information” from various sensors and fuse it together to give pilots information in “a great, clear picture of who’s good and who’s bad.”

“I’m very excited about the capability this airplane brings to our future air wings,” Shoemaker said, speaking to a group of journalists checking out the F-35 demonstrator set up in a ballroom near the North Island air terminals and a short drive from Shoemaker’s headquarters building.

Shoemaker, who took command of the air fleet in January, acknowledged the Navy is seen as “soft” on the F-35 and “behind” the Air Force and the Marine Corps – the latter expects to reach the critical initial operational capability (IOC) declaration this summer – in getting the jet into the fleet. Funding lags have delayed delivery in sufficient numbers, he said. But the service is on track to get its carrier version of the JSF into its air wings with its IOC targeted for 2018, he said.

Officials describe the jet’s fifth-generation platform as a jump in capability from current tactical aircraft the Navy flies. The “all-sensor fusion” refers to advanced suites of integrated electronics some refer to as the “brains” of the aircraft, particularly when paired up with the pilot’s helmet-mounted display and networked with the rest of the strike group and joint force. That, Shoemaker said, “is probably the most critical capability it delivers.”

“We’ve really have to solve a long-range combat ID problem,” he said, in “both air-to-air and air-to-surface – and this platform will bring that long-rage ID capability and then share that information.”

According to builder Lockheed Martin, “the F-35’s advanced sensor fusion enables pilots to draw on information from all of their on-board sensors to create a single integrated picture of the battlefield. All of the information gathered is then automatically shared with other pilots and command and control operating centers on their network using the most modern datalinks. These secure datalinks, such as the Multifunction Advanced Data Link (MADL), will enable pilots to share data with other strike aircraft as well as other airborne, surface and ground-based platforms required to perform assigned missions,” according to the company’s website.

Advanced technology aside, pilots flying the single-seat jet will remain an integral part of the jet as a weapon system. “You’re still the man in the loop, making decisions,” Shoemaker said. “You’re making the choice, when you will fire a weapon, how you interact with your flight as you head down range… The airplane isn’t doing it all.”

Compared to Boeing’s F/A-18E-F Super Hornet, “it’s very similar, from a skill-set perspective,” he said. “It’ll be fairly similar and easy to transition from something like a Super Hornet.”

Mark Johnson, a Lockheed Martin spokesman, noted “the computers do so much more of the flying now that the pilot has an opportunity to be really more of a tactician in the air.”

More refined information, such as identifying a particular enemy tank on the ground rather than just seeing “something” in the blip, Johnson said, “is a big deal. It is one of the tools in this particular aircraft that the people who fly it talk about the ‘big epiphany.’”

Shoemaker, a veteran pilot, recently visited Lockheed Martin’s plant in Forth Worth, Texas, although he yet hasn’t flown the jet. The advanced helmet “gives you some incredible situational awareness around the airplane,” he said.

The helmet doesn’t just protect the pilot’s head, Johnson said. It pulls and displays data for the pilot. Cameras around the aircraft provide views – a “360-degree, full situational awareness,” he said – that allow the pilot, literally, to see what’s below the jet without having to bank the jet as is needed with fourth-generation aircraft.

The advanced F-35 is touted as easy to fly, with advanced controls that enable almost a hands-free landing on an aircraft carrier at sea. That same capability – added into older aircraft via the Navy’s software project “Magic Carpet” – has been installed on some Super Hornets, Shoemaker said. It will mean pilots will have to conduct fewer Field Carrier Landing Practices, or FCLPs, before becoming proficient in the jet, and that reduction in required flight hours for training will help preserve the planes’ service life.

Lockheed Martin has brought the JSF demonstrator on a “road show” this spring to several locations, including Lemoore Naval Air Station, Calif. At North Island, officers with Naval Air Forces, maintainers with Fleet Readiness Center Southwest and Marine Corps aviators from nearby Miramar Marine Corps Air Station, as well as several journalists, got to jump into the seat and “fly” the jet.

The advanced jets will comprise one-fourth of the strike power on carrier decks by 2025, Shoemaker said. They will be joined on the flight deck by Super Hornets and Boeing’s EA-18G Growler electronic warfare jets, which “will very much complement what this brings to the strike group,” he said. “We really need to deliver this to those future air wings.”

The jet’s advertised stealth capabilities and advantage have raised some doubts, particularly with advances in detection technology that might make it harder to hide even advanced aircraft. Chief of Naval Operations Adm. Jonathan Greenert’s comments earlier this year questioning stealth’s advantages added to the concerns.

But Shoemaker said that, while advanced radar presumably could detect stealth aircraft, “stealth makes a difference. It still is very important.”

“If we have stealth platforms being protected by Growlers, you push that detection range way back,” he added. “It forces the enemy to do some things outside of the regular radar bands that will protect our assets.” 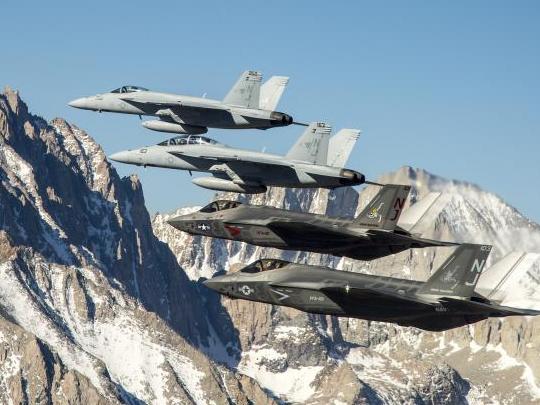 The future air wing would have one F-35C squadron, three Super Hornet squadrons with Growlers included and “hopefully” an unmanned squadron such as the Unmanned Carrier-Launched Airborne Surveillance and Strike (UCLASS), he said, noting “that capability will be key.”

The Navy plans to replace its aging fleet of F/A-18A and F/A-18C single-seat Hornet jets with the F-35C. The final costs per jet, now averaging $125 to $130 million, could drop closer to the $90-to $100-million target cost as the program matures, Shoemaker said, calling it “a tremendous value.”

“This will be an expensive aircraft to operate,” he said, which will necessitate more simulator-based training. Pilots will practice complex tactics in a virtual environment more than pilots do now, he said, which will actually provide more realistic training in some scenarios.

“We’re a bit challenged from a range perspective,” he said of current live training. Military officials have complained that constraints – environmental as well as airspace availability – in the Navy’s air ranges that can hamper realistic training. Pilots in the simulator “will be able to practice everything, … (even) things they might not be able to see flying live at Fallon (NAS),” the Navy’s premier range, he said.

Lemoore NAS will get the first F-35Cs in January 2017, Shoemaker said. About a dozen airplanes currently are with VFA-101, at Eglin Air Force Base, Fla. The squadron, the “Grim Reapers,” is training and qualifying F-35C aircrews and maintainers.

Meanwhile, the Marine Corps is moving closer to operational status of the F-35B, which can do short take-offs and vertical landings on amphibious assault ships and short runways.

The service, in a news release June 5, announced that the first F-35B operational test, held in late May aboard the USS Wasp, was successful. Deputy Commandant for Aviation Lt. Gen. Jon Davis has ordered the final Operational Readiness Inspection (ORI) to be done in June before the Marines declare IOC and the first squadron of 10 jets – Marine Fighter Attack Squadron 121, the “Green Knights” –can begin operations.

“This will be an outcome-based measurement of readiness, assessing whether VMFA-121 as a whole is ready to perform the mission it is assigned,” Davis said in the statement. “If the ORI is completed in July, and we are confident that the aircraft are ready for world-wide deployment, then we’ll declare IOC in July. If that doesn’t happen until August, then it will be August.

“Bottom line is that we won’t rush this; we are doing this the right way,” he continued. The first deployment is expected in 2017, when VMFA-121 deploys to Iwakuni, Japan, the Marine Corps said. The F-35B will replace all the Marines’ EA-6B Prowlers by 2019, AV-8B Harrier jump jets by 2026 and older legacy Hornets in 2030.

The F-35 program is the first fighter developed as a joint program. The Defense Department plans to buy more than 2,400 jets in total, making it the military’s largest acquisition program, according to a 2014 Congressional Research Service report. It noted that “hundreds” more jets might be bought by U.S. allies, including “eight… which are cost-sharing partners in the program.”