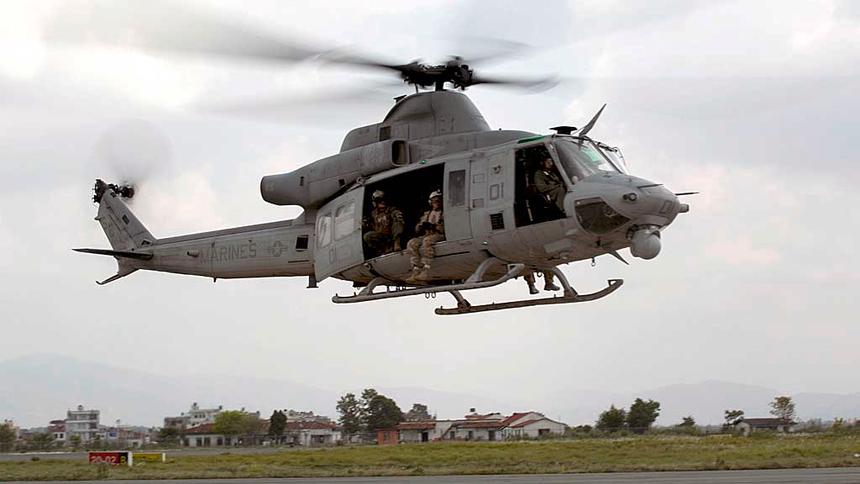 A UH-1Y Huey helicopter flies into the Tribhuvan International Airport after a search and rescue operation in Kathmandu, Nepal on May 13, 2015. US Marine Corps Photo

“Because of the nature of the wreckage, it’s unlikely there are any survivors at this time,” Joint Task Force 505 and III Marine Expeditionary Force (III MEF) Lt. Gen. John E. Wissler said.

The statement from Wissler follows the discovery of the crash site — identified by members of Joint Task Force 505 about 1:50 P.M. local time on Friday about eight mile outside of Charikot. The was surveyed by U.S. four pararesucuemen and a combat rescue officer, PACOM spokesman Army Maj. David Eastburn told USNI News.

However USNI News understands additional search efforts have been suspended due to severe weather.

In addition to the five troops on the ground, “two UH-1Y Hueys with Marine Light Attack Helicopter Squadron 469 and one MV-22 Osprey with Marine Medium Tiltrotor Squadron 262 are currently in support of the survey,” Eastburn said.
“The assessment of the site is ongoing and a thorough investigation will be conducted.”
The now found Huey went missing on Tuesday on a mission to deliver humanitarian aid about 85 miles east of the capital Kathmandu. The helicopter was part of JTF-505, stood up after the 7.8-magnitude earthquake struck Nepal on April 25.

The following is the May 15, 2015 statement from U.S. Pacific Command.

JTF 505 currently has a team of four pararescuemen and one combat rescue officer on the ground. Two UH-1Y Hueys with HMLA 469 and one MV-22 Osprey with Marine Medium Tiltrotor Squadron 262 are currently in support of the survey.

A Nepalese search team reported the siting of the wreckage at approximately 3:00 p.m., JST. Indian and Nepalese service members assisted with the search.

The assessment of the site is ongoing and a thorough investigation will be conducted.