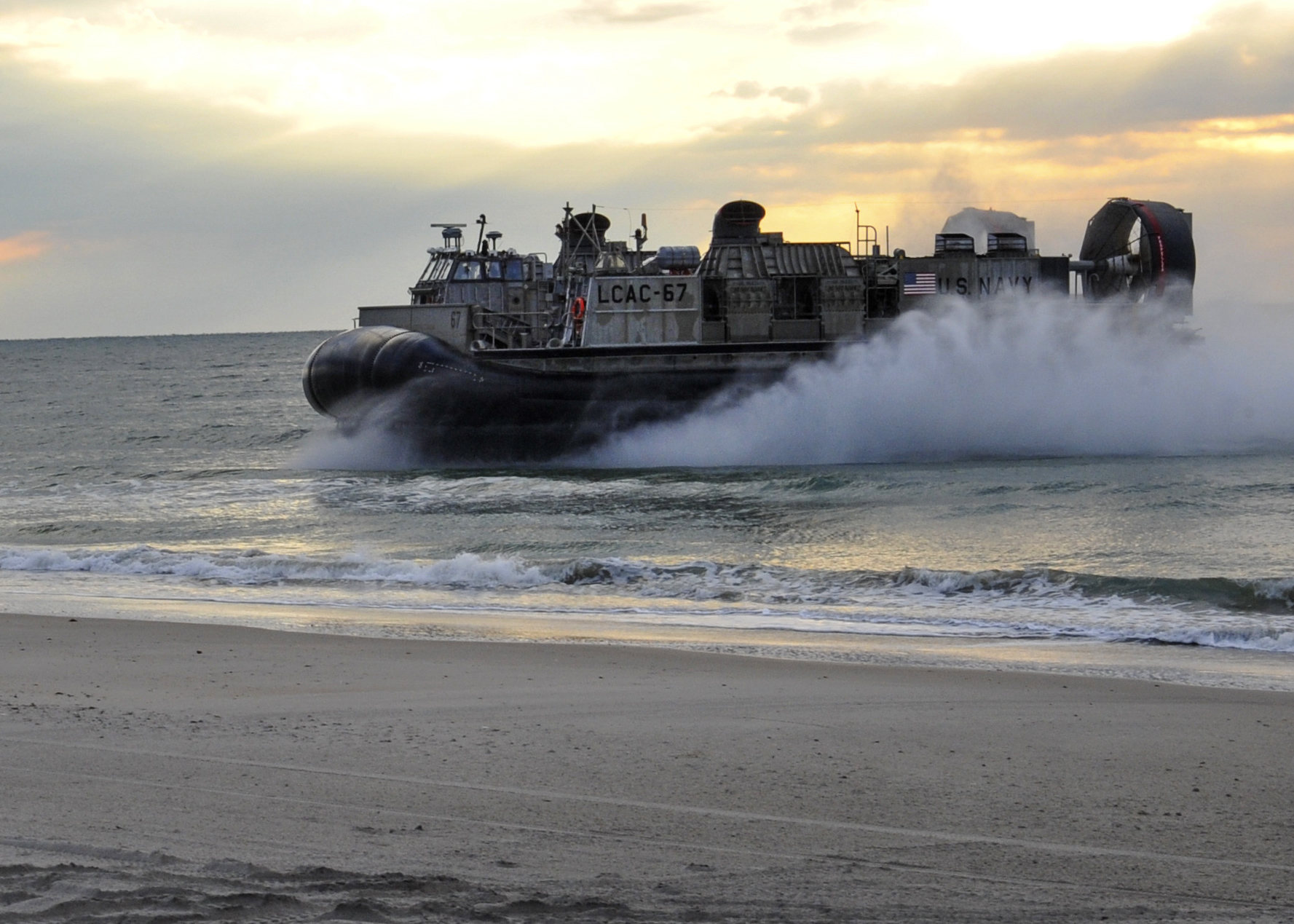 NATIONAL HARBOR, Md. – The Navy is further extending the life of Landing Craft Air Cushions (LCACs) that have already gone through their Service Life Extension Programs (SLEPs), with the oldest craft set for retirement this year and the replacement not ready for its first delivery until 2017.

The Navy has an inventory of 72 LCACs and intends to replace them with 72 Ship-to-Shore Connectors (SSCs), the first two of which are already under construction, amphibious warfare program manager Capt. Chris Mercer said Monday in a presentation at the Navy League’s Sea-Air-Space Exposition. Fifty landing craft have completed the SLEP and rejoined the fleet, seven more are in the SLEP now and a request for proposals for more SLEPs in Fiscal Year 2015 and 2016 “will be out shortly,” Mercer said.

But despite the effort to bring the LCACs from 20 to 30 years of service life, the life on the oldest ones is set to run out this year, meaning the Navy’s inventory of landing craft would drop steadily over the next few years. SSC manufacturer Textron just recently signed a contract for the third and fourth SSC and expects a contract next year for five – well short of the eventual full-rate production of 10 to 12 a year, Bill Kisiah, vice president of marine systems for Textron Marine and Land Systems, told USNI News at the conference.

So, the Navy began a Post-SLEP Extension (PSE) to address “some rotating machinery and some obsolescence upgrades,” Mercer told USNI News after his presentation. The PSE will not include replacing the air cushion skirt and other more intensive work included in the original life-extension program.

“We don’t do a lot structurally to the craft, but just to give it a few more years of service life,” he said.
“We started our first [PSE] this year. [The LCACs] go out of service in about ’15, so we’re putting more life into them now. We’re estimating around $5- to $6-million per craft” for the work, he said, adding that the Navy had not determined how many SLEP-ed LCACs would go through the Post-SLEP Extension process.

“We want to invest in new and stop investing in old, and so does our resource sponsor in OPNAV (the chief of naval operation’s staff), [Maj. Gen. Robert] Walsh,” Mercer continued.
“So we’re going to really try to expedite delivery of the new craft so that we don’t keep putting money into the old craft.”

In the mean time, the Post-SLEP Extensions will take place in yards near fleet concentration areas – Camp Pendleton on the West Coast and Joint Expeditionary Base Little Creek-Fort Story on the East Coast – and will remain small in scope, Mercer said.

Mercer said the new SSC would represent a great upgrade in reliability for the Navy and Marine Corps. SSC 100 began production in November and 101 in January, and after extensive test and evaluation the craft would deliver in the summer of 2017.

“It can carry a lot more – 74 short tons [compared to 60] – similar speeds, and much greater increased reliability and performance of the craft,” Mercer said during his presentation.
“How did we do it? We’re putting all new controls into the craft, redesigned pilot/copilot arrangement, advanced skirts, resized cargo decks, modern engines, efficient propellers. The whole design is based on the top 25 maintenance drivers that we’ve incurred over the past 30 years of operating the LCAC. We know exactly what we spend the money on and we designed this craft to get that out so we can have much better reliability and reduced sustainment costs throughout the 30-year service life.”

In addition to addressing the LCAC maintenance issues, Kisiah said that the SSC would also be made out of anti-corrosive aluminum and composites; would include the Rolls-Royce MT-7 engine, a marinized version of the Rolls-Royce AE 1107 engine used in the Bell-Boeing MV-22 Osprey; and would replace four gear boxes with two dual-input/dual-output gear boxes. All told, the SSC would have “about the same speeds, about the same size with more power and less maintenance,” he said.