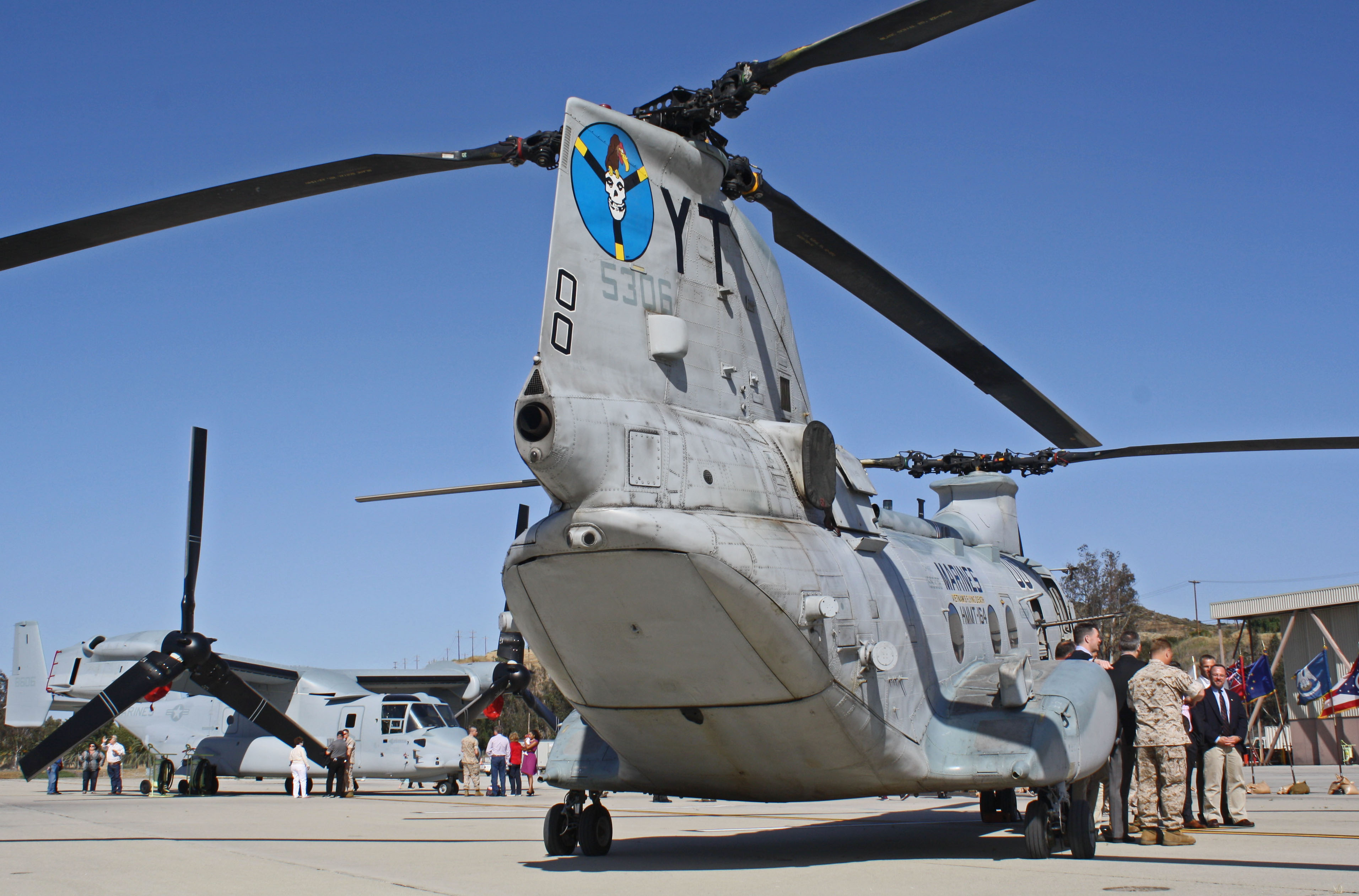 CAMP PENDLETON, Calif. — It’s perhaps a most fitting tribute: The first active-duty Marine Corps operational squadron to get the CH-46 Sea Knight helicopter became the last one to fly it and officially transition to its replacement, the MV-22B Osprey tiltrotor.

That shift happened Thursday during a dual-hatted ceremony at Camp Pendleton, where Marine Medium Helicopter Training Squadron 164 held a change-of-command and redesignation as a tiltrotor, or VMM, squadron. It marked the end of an era, coming 50 years after the first Sea Knight model, the CH-46A, replaced the UH-34 flying combat missions in Vietnam in 1966.

“It’s bittersweet,” said retired Col. Daniel C. Hahne, who commanded the training squadron from 2002 to 2004. Hanhe was one of 10 former squadron commanders who joined Lt. Col. Gabriel Valdez for the pass-in-review before Valdez handed the squadron’s reins to Lt. Col. Eric Aschenbrenner. Aschenbrenner, a former F/A-18 Hornet jet pilot who transitioned to the MV-22 in 2009, will oversee the squadron of Ospreys as a deploying operational unit.

“How do you capture 50 years of clear awesomeness in 10 minutes? I can’t,” Valdez told the crowd, which included Vietnam veterans, active-duty Marines and veterans of the Iraq and Afghanistan wars. He noted the shiny olive green-painted Phrog — aircrews long have affectionately called them Phrogs, or Battle Phrogs — parked in the hangar. “That’s going to be the last Marine Corps CH-46, ever,” he said.

That helicopter, designated by Bureau Number 153369, is one of the squadron’s last two CH-46E Sea Knights that will take their final flights from the flightline in a few days. It will see a new chapter when it becomes a static display at the National Museum of the Marine Corps in Quantico, Va. The Phrog saw combat for the first time in the jungles of Vietnam in 1965 and again a decade later, when it picked up the last Marines off the U.S. embassy rooftop in Saigon on April 30, 1975.

The other helicopter, BUNO 155306, retains the light gray paint of the Marine Corps’ operational fleet and will join dozens of other Phrogs in long-term preservation, parked at the military’s “Boneyard” at Davis-Monthan Air Base in Arizona. The final piece of the Marine Corps’ transition to the MV-22 Osprey as the backbone of its medium-lift transport fleet will come later this year with the redesignation of the last reserve squadron, HMM-774, to VMM.

But even as the Marine Corps long ago turned its attention to the MV-22, the venerable CH-46 is retiring with plenty of meat on its bones. That’s true of the 15 helicopters that HMMT-164 has had on the books through 16 months preparing for the transition to an Osprey squadron and since the squadron graduated the final class of Phrog crew chiefs.

The Phrogs sent to the desert “are in the best shape of their lives,” Valdez told the audience, which included Maj. Gen. Michael A. Rocco, who commands the 3rd Marine Aircraft Wing, the Marine Corps’ West Coast-based wing at Miramar Marine Corps Air Station in San Diego. “They are combat ready. If and when they are needed again…, these aircraft would be up in the air in no time.” 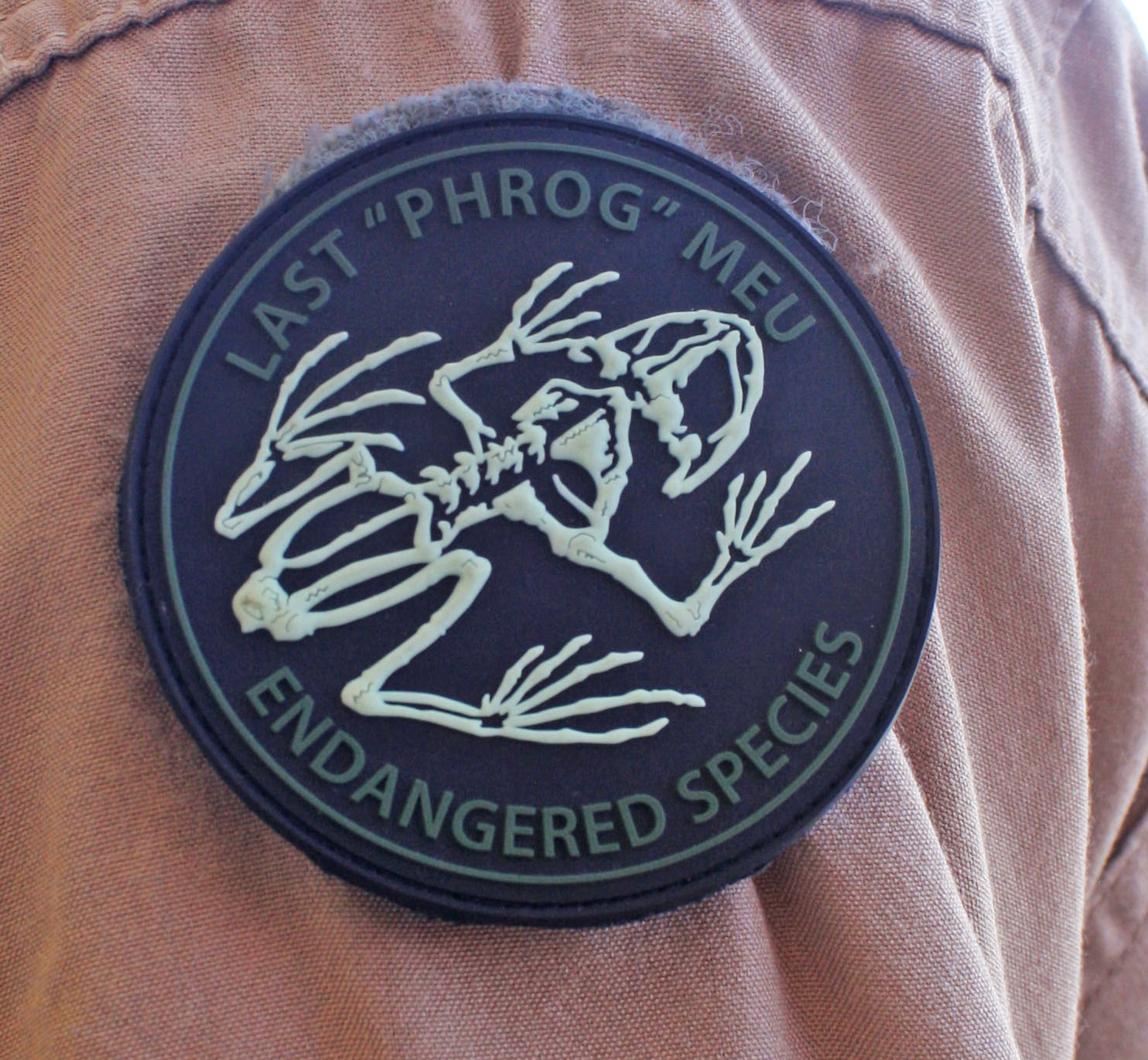 Valdez gave kudos to the squadron Marines, nicknamed the “Knightriders,” who he said remained dedicated and adhered to the combat mindset even as “we dropped the H and added a V.”

Aschenbrenner, the incoming CO, reminded the Marines that while taking on the Osprey, they “are all still Knightriders. We are going to write another chapter… like when the 46 replaced the 34.”

“It’s going to be a very challenging and historic and a good time,” he added.
The squadron was in the history books as the first to fly the then-CH-46A into combat in Vietnam. In 1999, it took on the role of the Corps’ CH-46E training squadron, or fleet replacement squadron, at Camp Pendleton. The stories of the Battle Phrog and its missions over the years are as varied and poignant as the memories and recollections of its aircrews and maintainers all now destined for the history books.

Retired Col. J.G. Smith praised the mission accomplishments and combat worthiness of the venerable Phrog, long known as a workhorse of the Corps. “This aircraft has been doing its job like designed for the last 50, 55 years,” said Smith, who commanded HMMT-164 from 2004 to 2006 and amassed 3,500 flying hours. “It has worked as hard as it could.” Hahne likened the Phrog to “the F-150 of the Marine Corps,” fulfilling a wide range of vital support missions in combat and in peacetime.

There was a hint of sadness and a somber tone to the afternoon event. The Phrog was “the linchpin” of the Corps, said retired CWO-4 J.J. Robles, a former avionics officer with the squadron. “It’s hard to get it into words.”

“I’m going to miss it,” Capt. Brett Bishop said as a crowd of several hundred people waited in the hangar for the ceremony to begin. The Phrog “is very reliable, easy to fix, and it’s combat ready for any situation.” Bishop is assigned as the logistics and communications officer with the “Purple Foxes” of VMM-364, which in late October sent its last CH-46E to the Boneyard as it transitions to the Osprey. 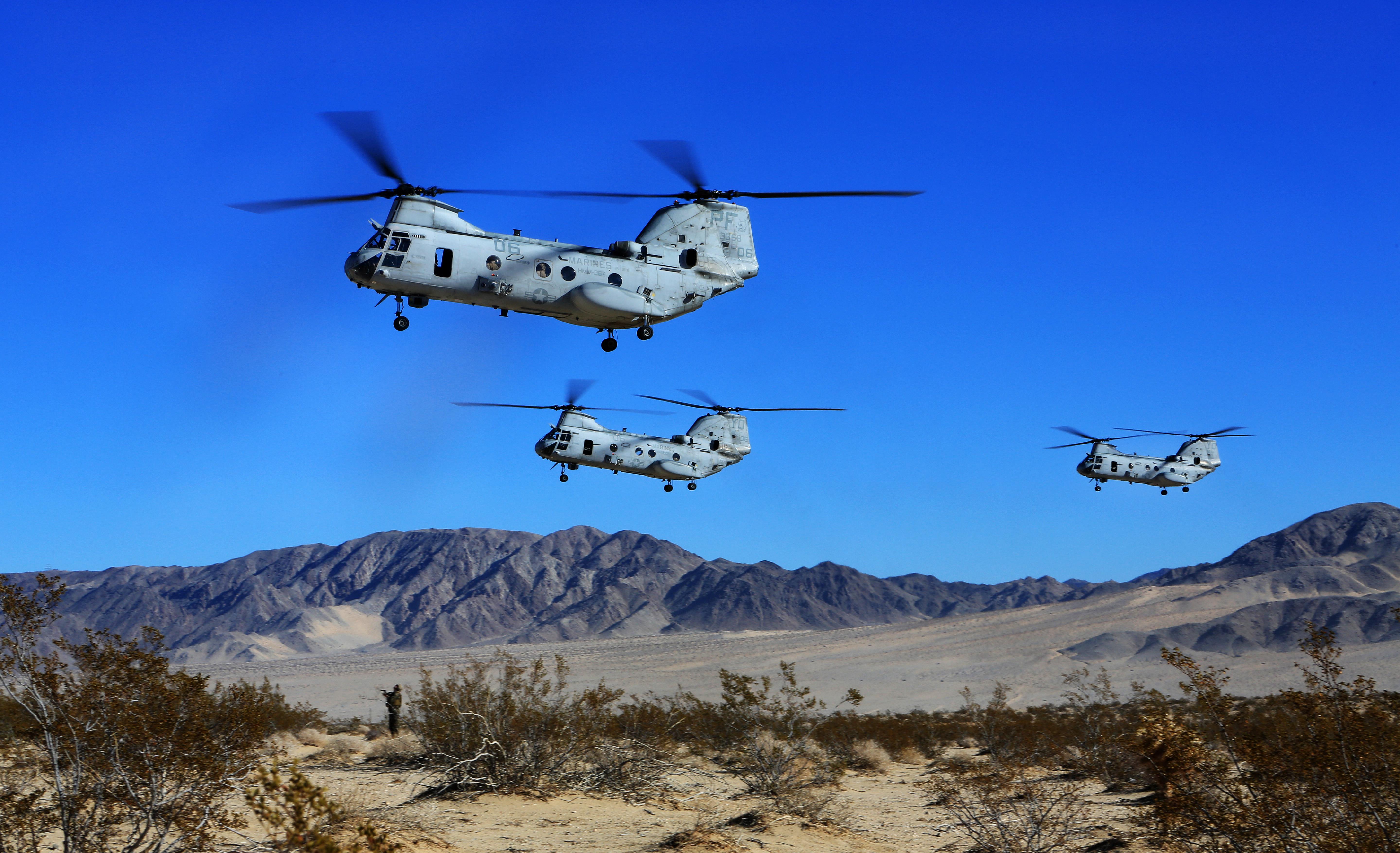 The Phrog was Bishop’s first choice in flight school. “The mission impressed me. And it’s always cool to have guns,” he said, with a chuckle. “The big thing that sold me on it… is what we can do with it, and what we can do as a family.”

He noted the close relationships among flight crews and within the squadrons, and the close ties with others outside the wing, including infantry units they have supported and anyone who has relied on the helicopter for combat support, resupply or a lift under fire. “I picked it based on the people, and I loved it,” he said.

Bishop has tallied 1,400 hours flying the Phrog during his eight years in the Marine Corps. His most recent flight? Flying BUNO 153369 to the naval aviation depot, the Fleet Readiness Center-East, at Cherry Point MCAS, N.C., where it got the green paint job and preparations for its museum assignment. But Bishop will leave the service later this year. Unlike the Marine Corps, flying the Osprey is not in his future.