ALEXANDRIA, VA. — The Norwegian manufacturer of the Naval Strike Missile (NSM) has teamed with U.S. missile manufacturer Raytheon to pitch the anti-ship missile (ASM) to the Navy as the over-the-horizon (OTH) ASM for the Littoral Combat Ship (LCS), company officials told reporters in a briefing on Thursday.

The agreement comes as the Navy surface warfare directorate is working through the requirements for a longer range anti-ship missile to include onboard the LCS and the modified LCS frigate design with a request for proposal (RfP) for the capability expected in Fiscal Year (FY) 2016.

The NSM — or a derivative — could also compete for the Navy’s Offensive Anti-Surface Warfare (OASuW) Increment 2 multi-platform competition as a follow on to the Lockheed Martin Long Range Anti-Ship Missile (LRASM). LRASM is in a sole source negotiation with Naval Air Systems Command (NAVAIR) for OASuW Increment 1.

The NSM — already a staple onboard Royal Norwegian Navy ships — is billed as a stealthy, subsonic missile to replace aging anti-ship missiles like the Boeing RGM-84 Harpoon Block II and the French-designed MBDA Exocet.

“There are several foreign nations that have developed counters to the Harpoon and Exocet missiles — from a range perspective — this particular missile fills that gap and allows [navies] to outrange the folks with the foreign systems that are being directed at our vessels,” Taylor Lawrence, Raytheon Missile Systems president, told reporters.

According to press reports, the NSM has an effective range of about 100 nautical miles.

“Our missile is competing very well, compared to other missiles when it comes to price per missile,” Harald Ånnestad, Kongsberg Defense Systems president told reporters
“The price will vary a lot if you buy ten or if you buy 400 missiles.”

For the LCS mission, the companies are proposing to place the proprietary canister launchers on the deck of the ship and claim the missiles could easily tie into the combat systems of both classes. 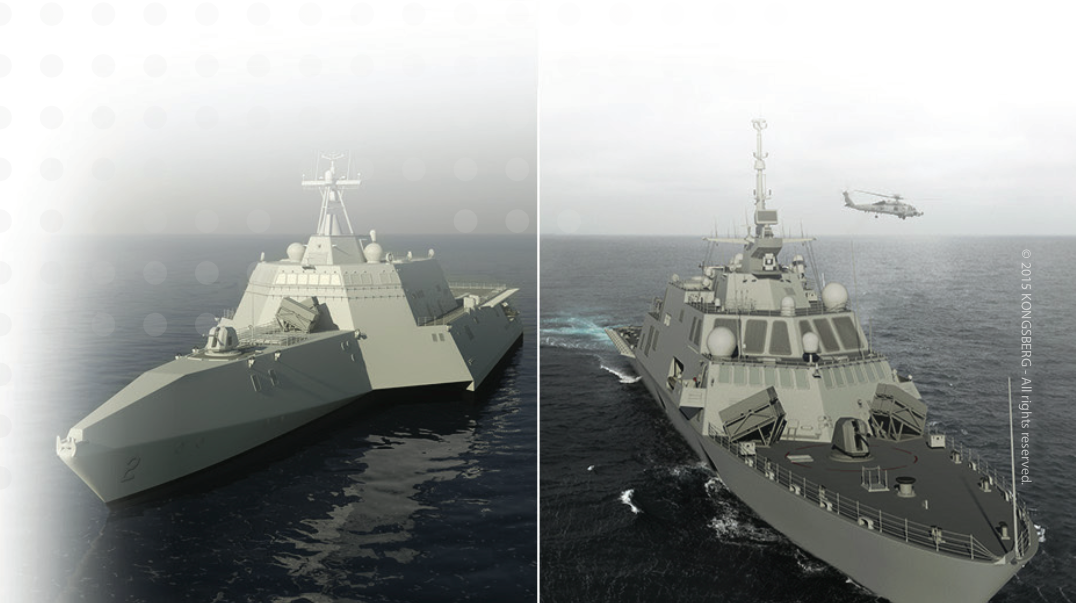 An artist’s concept of Naval Strike Missile launchers mounted on both variants of the US Navy Littoral Combat Ship (LCS). Kongsberg Image

“We’re looking at these canisters to be placed on the deck or an appropriate horizontal surface on the ship and integrated in their missions control, mission planning suites,” Lawrence said.
“We wouldn’t have to have the vessels radically modified to include vertical cells for that matter. These would be placed on the deck.”

An artist’s conception of the placement would put the canisters forward of the deck house and aft of the main gun on both the Independence and Freedom classes of LCS.